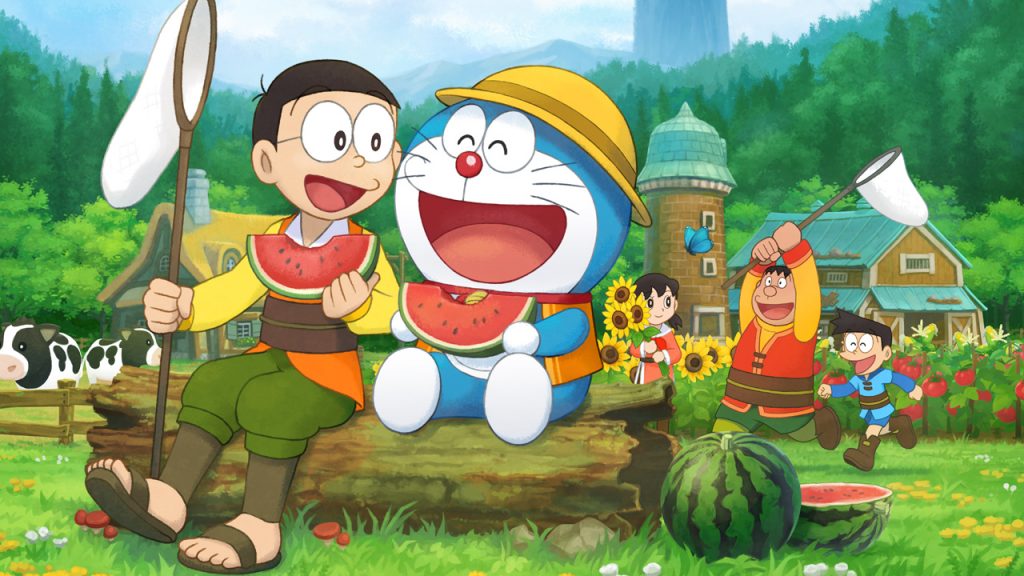 Doraemon Story of Seasons PS4 Review – Franchise mashups are always fun outings for fans of both franchises. With Doraemon, a long-running, beloved family-friendly manga and anime, and Story of Seasons, a beloved generation-spanning farming sim, mixing together, there’s a lot of room for excitement. At the same time, the history of this genre and the successes of more modern games leave a more-than-healthy level of competition to the formula. Does Doraemon Story of Seasons have what it takes to stand up to some of the more recent heavy hitters?

Finding Yourself In Natura

You play as Noby Nobi, who is accompanied by Doraemon, a earless cat alien robot companion. After finding a strange new seed, Noby and his friends get sucked into a portal that brings them to a place called Natura. There, you meet an entire community of people who work hard and live off the land. Not wasting any idle hands, the locals recruit everyone to different tasks across Natura.

Noby becomes the last person assigned to a task, which is to tend to an entire farm. In doing so, he gets to live there and grow whatever he wants. After an hour of Natura locals telling everyone to not mooch off them, they give Noby a piece of property. Continuity aside, this farm is now your venue for building up your farm.

I didn’t exaggerate in the above point: it took a literal hour before I was able to do much of anything. Even after that, I didn’t have all the means to truly start playing. The means of saving, a journal, is finally given to you after almost two hours. With speed reading, I managed to get to this first saving point after one hour and 58 minutes.

After the elongated tour overflowing with character introductions and mechanic explanations, the gameplay starts. In defense of both the Doraemon and Story of Seasons franchises, they’ve been around much longer than Stardew Valley has, but a passion project like Stardew Valley manages to channel the heart of what makes farming and life sims so engaging while streamlining all of the peculiar work-based tasks. Doraemon Story of Seasons doesn’t do any of this. Depending on your preference, it’s necessary to know that this game feels much like some of the original farm sim titles from decades past.

Inventory space immediately rears its head. With only eight initial spaces, you have to manage that space with five tools, each one taking up a space. You can put some away that you’re not planning to use in your farm’s storage bins, but this limits your potential crop output and input. Inventory expansions come later, but that’s only after a major time investment.

Resources themselves are not scarce, but upgrades for both inventory space and tools require a great deal of these resources. In order to get to those numbers, you need a lot of time, effort, and inventory management. Days are quite short, and trying to get everything done in one day, from shopping during open hours to selling your yields on time, requires far too much organization for early in the game.

Doraemon offers the kind of farming mechanics native to games like it. However, the sense of work is not nearly as effortless or accessible. One point in particular comes when having to trick a target multiple times. Like with Animal Crossing, your character moves back in a slight recoil after each strike.

Unlike Animal Crossing, however, there’s no way to keep Noby from moving backwards. This issue carries into a similar problem: constant adjustments. With the D-Pad, you can change the direction Noby faces, allowing you to fine-tune your motion. At the same time, Doraemon doesn’t offer up any forgiveness for being even a frame too far away from your target, which then takes extra time to have to refine your position to your target.

In games of this kind, the most successful of them has a way of allowing the player some wiggle room when it comes to approaching and interacting with targets. In both Stardew Valley and Animal Crossing, your character does not need to be right up on the target in order to work with it. Stardew Valley even offers a control option that shows where your tool will interact next. Doraemon does something like this as well, but Noby still has to be pixel-perfectly close to the target.

What kills me about my frustrations with Doraemon is that the engaging, relaxing, enjoyable routine of the farming simulator is still very much present. Learning about the locals and discovering the most efficient means of gaining money and resources is ever-gratifying. Couple that with the amount of farming necessary for basic growth on top of some demanding controls, and the recipe is not favorable to the farm sim formula. Doraemon Story of Seasons would greatly benefit from some quality of life improvements.

Doraemon Story of Seasons does a great job of creating the farming simulator environment where routine work turns into overall growth. At the same time, the mechanics of the game turn the fundamental controls into clunky tedium that makes the slow intake of rewards feel too unbalanced from the effort put into the game. Doraemon is a game intended as a family-friendly but yet an elite farm sim. Much of the game works in its own right, but too many aspects of Doraemon contradict each other to warrant much of a time investment.

Doraemon: Story of Seasons is out now on PS4.

Within Doraemon Story of Seasons beats the heart of what makes the farm sim genre engaging. Unfortunately, the controls don't offer many favors, progression takes a great deal of time, and the early game demands far too much organization to feel productive. Doraemon is not for the farming sim feign of heart, which contradicts its family-themed aesthetic and narrative. Consider Doraemon Story of Seasons a recommendation only for fans who love both franchises.