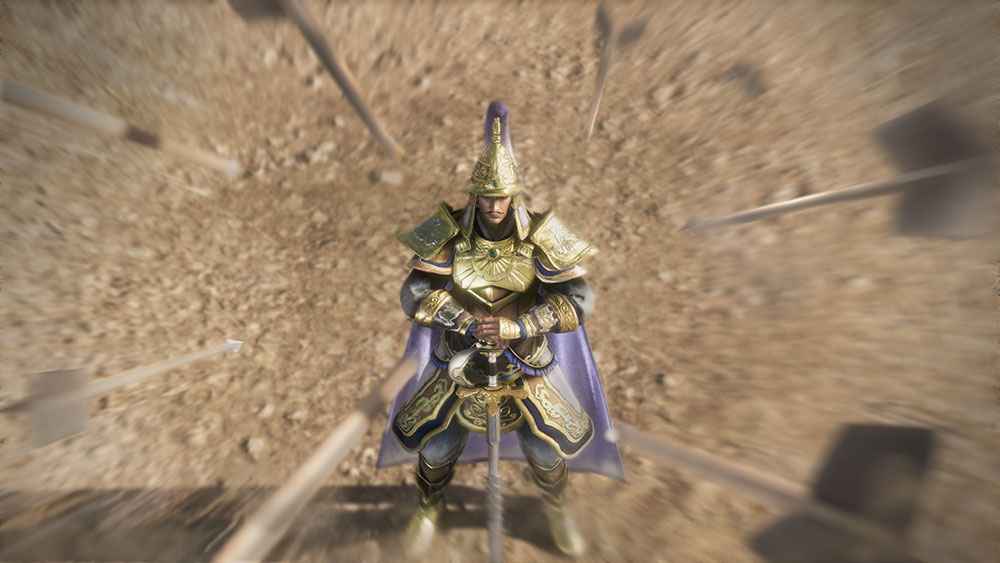 It’s taken Omega Force a while, but Dynasty Warriors 9 is where it finally breaks up the musou formula. After countless sequels and spin-offs, the time has come to reassemble. That shift was always going to be something of a tough transition for a series so very stuck in its (admittedly successful) ways. Dynasty Warriors 9 does have teething troubles, truly it does. Yet the things that have always made Omega Force’s musou titles entertaining are still in place. So hope floats much like your trusty steed does in this game.

The story still concerns the epic tale of The Romance of the Three Kingdoms. Here it begins with the Yellow Turban Rebellion. Then progresses as the final objective is conquered in each of the 10+ chapters that make up the game’s story.

There are outposts, fortresses, villages, and more to uncover, all playing their part in the ever-evolving wars you wage. Your character is a lot more flexible than in previous entries, with sneaking, jumping and a nifty grapple hook, helping you to explore and infiltrate. The result is a much more freeing, fluid style to the way Dynasty Warriors 9 plays, but the open world brings very noticeable drawbacks.

Visually, the game is a step down overall. Understandably, the sheer open-ended scale of the game world is the reason for that. Often the game’s muted color palette, coupled with vast stretches of bleak scrub land, make for a visually unappetising concoction. When you throw in technical hiccups, low-rent animation when doing anything outside of fighting, frame rate that is dragged into the low numbers all too frequently, and slow texture loading, Dynasty Warriors 9 does not make the best first impression.

What is impressive is how it recovers from this admittedly large list of grumbles. In fact it still perhaps, is the most interesting musou for some time.

While visuals may not be as sparkling as they once were, Dynasty Warriors 9 still has fleeting moments of beauty. These are mostly found in the various vistas of ancient China, be it woodland, mountains, or rivers. It also appears in the flurry and chaos of battle. There’s a real sense of scale to Dynasty Warriors 9’s warfare that was never quite captured in it’s smaller battle boxes of old. It also fits better because mechanically, Omega Force have vastly improved the tactical side to the series.

There’s an intriguing freedom to how you tackle each story mission for example. If you fancy yourself as a combat deity, then you can just head straight to the source of your woes and take it head on without the preamble, and it’s entirely possible to do so. The catch is that things are made a lot tougher by not weakening the enemies grip on the land before seeking out your main objective.

By toppling outposts, saving villages, and generally slicing up hundreds of soldiers at a time, you can make the final assault of each chapter a hell of a lot easier. Better yet, by utilising stealth.(which is honestly a bit patchy), the cover of night, and your trusty grappling hook and bow, there’s every chance of catching the enemy off-guard and understaffed.

Be warned though, the changes you make to the battlefield are reset after each chapter, as the passage of time changes the world based on whatever historical impact the events of The Romance of the Three Kingdoms has had. Even so, every mission and wander around China helps to gain cash, items, and xp for upgrading your characters.

It’s not particularly simple to understand at first, despite being rather shallow by usual open world standards. It’s part of why my gut feeling about the game was that it’s simply more Dynasty Warriors, but with an open world and uglier. Yet through gradual progression, these slightly deeper facets of Dynasty Warriors 9 come into play more and more. That you can just play it as a straight roaming brawler and a tactical stealth strategy game and switch between both styles is the real joy of Dynasty Warriors 9.

Thankfully, the introduction of the open world and extra layer of strategic play, doesn’t really sour the core feel of an Omega Force musou. The stop/start nature of Omega Force’s titles before this were tolerable. Mainly because the bite-size chunks of gameplay were becoming a good fit for an otherwise tired formula. In Dynasty Warriors 9, you can do as little or as much as you wish. Story mission completion does break up playtime a bit, but otherwise, it’s a quick chat at worst. Then you’re off liberating outposts, toppling generals, or just simply stopping for a bit of fishing.

The combat is still the meat of it though, and there’s a definite upgrade to the base Dynasty Warriors setup. The new ‘State Combo System’ allows for a variety of attack combinations. First up, Flow Attacks. These are combo attacks (using the Square button) that change depending on an enemy’s state. Reactive Attacks (Triangle) meanwhile, create optimal attacks for the situation at hand. These include counters, guard breaks, and stylish finishing moves. Finally, there’s Trigger Attacks which can trigger combos by stunning, launching, or downing opponents. This is done by modifying the regular button presses by holding down R1.

Coupled with the visual flourishes, it makes for a rather satisfying spectacle of violence. It’s always important that the combat is pleasing on a base level in Dynasty Warriors. That’s got notably more difficult as it has been repeated over time, but the modifications here have definitely added some much-needed extra depth. If only that frame rate cooperated a bit more often, it’d be better still.

A small downside is in the characters. It’s certainly not the number of them. We still get a whopping 83 officers in Dynasty Warriors 9. It’s down to how the change in weapon usage has meant there’s a touch of personality loss for the officers. You can effectively tweak any character to fit any weapon type and combat style with upgrades. Base stats for each character are what make them unique to begin with. Yet without a true specialisation for weapons, it’s not quite as special. The upside is you can use your favorite character in any way you see fit. So there’s now a Daqiao, Lu Bu or Zhou Cang for all occasions.

The fully-voiced interactions between the cast in the many cutscenes is welcome over reading reams of text alone. The voice-acting is a touch soap opera, but in all honesty, that fits perfectly with the overblown melodrama of an otherwise factual narrative. There’s bound to be better voice acting in games this year for sure. Few voice casts fit the tone of its storytelling like Dynasty Warriors 9 does.

There’s a lot to contend with in Dynasty Warriors 9. The changes have both a positive and negative impact on the pre-existing formula. The most important thing is they do enough to freshen the series and provide a jumping off point for future refinement. There’s plenty to enjoy, plenty of characters to play with, and a better flow to the entire package thanks to the inclusion of an open world setting. Dynasty Warriors 9 comes off a tad scruffy-looking from its makeover, but it’s all the better for it.

If you enjoyed this Dynasty Warriors 9 review, why not check out our game page for it here.

The transition to an open world has not been easy, quite rough in fact. Still, Dynasty Warriors 9's many changes to the musou formula hold great promise for the future. This is the rebirth the series needed, regardless of its issues.