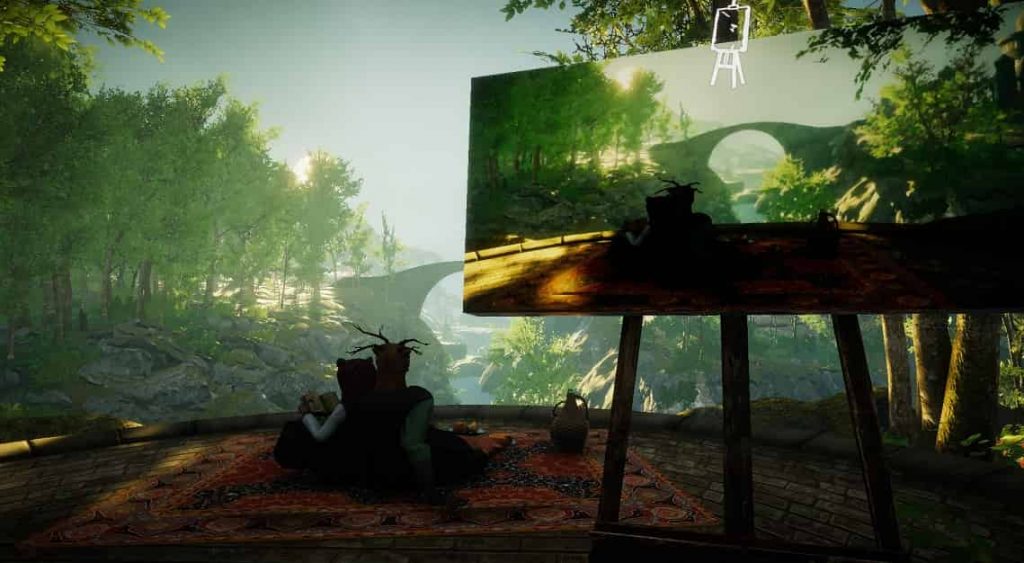 When folk talk about games in escapism terms, I’d like to think that they do so on a scale. Sure, jumping into the bombastic, gut-punching campaign of the recently released Call of Duty: Modern Warfare is not something that most of us would do in our actual lives, and so would definitely count as escapism. On the far end of that scale then is Eastshade, a completely combat-free, first-person narrative adventure that casts the player as a travelling painter who makes a promise to his ailing mother to paint four key vistas from the island of Eastshade.

After a brief introduction in which the player finds themselves shipwrecked on the titular island, Eastshade begins in earnest, unfurling its seemingly simplistic though surprisingly engrossing narrative. Though Eastshade would seem to be cut from the same cloth as titles such as Dear Esther and What Became of Edith Finch (albeit with nowhere near the sort of introspective focus on the human condition), the truth is that it’s actually much closer to a pacifists take on The Elder Scrolls V: Skyrim and it also doesn’t hurt that it’s roundly brilliant, too.

As you gingerly peak out from the cave that served as your refuge from the splintered peril of the wrecked vessel, Eastshade Island rolls out from beneath your feet; the finely granular sand of its beaches giving way to coastal outcrops, towering lighthouses, grassy knolls, deep forests and bustling towns and seaside villages teeming with activity. From here you are free to wander the island, though certain barriers prevent you from progressing to other parts – such as toll bridge for example that requires payment in order for you to cross.

Dovetailing directly into the peaceful nature of the game, the player embarks on a journey of discovery, with the eyes of Eastshade’s wayward artist being the lens through which the natural beauty of the world and its inhabitants is enjoyed. With your trusty notebook in tow, Eastshade encourages wanderings off the beaten path as you make notes on places you’ve been, people you’ve talked to and events you’ve witnessed. As your journal begins to bulge with your accumulated discoveries, so too do the number of conversation options that you able to employ with the local townsfolk expand in near enough equal proportion.

This is crucial too, not least because it’s only by broaching certain topics that you have knowledge of beforehand with some folks, that you are able to gain additional insight to help you along your way. In one example, a mysterious lighthouse tower appears locked, preventing you from getting inside; however, speak to one of the journeying townsfolk and they’ll let you know that they saw some mysterious lights around the structure at night, prompting you to go back later and uncover the truth behind it all.

And this is the thing, because the act of discovering something new in Eastshade is so effortless and organic, you find yourself experiencing a subtly pleasant rush when you stumble across a long forgotten treehouse, a book containing some forgotten history, or a cave somewhere – such is the strength of Eastshade’s world building and its ability to incite wide-eyed curiosity and wonder in the player. Pointedly, there’s no minimap in Eastshade because, quite frankly, you never feel like you need one – so detailed is the world that you can find your way around it extremely quickly by virtue of its many memorable landmarks.

Eastshade Crafts A Living, Breathing World That Is A Joy To Explore

That sense of discovery extends to the charmingly quaint townsfolk too, since just by speaking to them you’ll uncover the relationships they have with one another as each of them go about their everyday lives according to a well implemented day and night cycle. Spanning multiple races of humanoid animals, the folk of Eastshade Island are a wholesome lot who find themselves caught up in all sorts of shenanigans into which the game’s quest structure feeds into.

Befitting its pacifist beats, one such quest has you obtaining soap from a local in order to help another villager remove a pot that has become inexplicably stuck on his head, while another has you playfully sabotaging somebody’s fruit pastries with a filling that they really don’t like. It’s all tremendously twee stuff that not only makes Eastshade refreshingly different from the usual violent fare that’s around at the moment, but also helps to reinforce the fact that Eastshade is eminently suitable for players for all ages too.

In most cases, the various denizens of Eastshade are willing to trade you an item, or something that you need to progress in return for a painting of a specific scene, and it’s this mechanic which essentially represents the crux of the game and serves as one of the main quest types that you’ll receive. Don’t worry – you don’t need any actual artistic talent to a complete a painting, but what you will need are the materials for the canvas (more on that in a bit) and the knowhow to crop your image correctly.

In Eastshade, painting is essentially a glorified kind of screen capture exercise, where you simply expand or contract a window that then crops the image on your screen before fashioning it into an actual painting within the game world that you can give to others, or keep for yourself. The various subjects that you’ll paint are varied and can often depend on the time of day too. In one example, a river-dwelling inhabitant longs for a picture of a beach – a request that it is easily fulfilled as it only requires you to venture back to the starting area. In another instance though, a client requests a painting of a total eclipse – a feat that is much more difficult to accomplish.

Notably, the canvas that you’ll need to paint on is not an infinite resource but rather must be crafted from components found in the environment, such as wood planks and fabric. The crafting system in Eastshade also extends beyond the fashioning of canvas for your trade, as once you’ve obtained blueprints from the various townsfolk (again, mostly paid with art) you can start building more exotic creations such as boats made out of plants (trust me) and other such curiosities.

Of course, Eastshade wouldn’t be half as mesmerizing if it wasn’t for the visuals and quite simply, Eastshade is a marvel. With tree branches that sway gently in the breeze, their shadows cast across cobbled paths, the clouds in the sky slowly soaring over head as you ascend a mountain summit, or the delicately detailed interiors of any of Eastshade’s painstakingly modelled structures, there’s no denying that the game is supremely easy on the eyes – with every step boasting ridiculous screenshot potential.

Equal to the task of Eastshade’s visual caliber is the audio work. Though the voice acting isn’t especially great, but is delivered with a heartfelt level of palpably charming verve, it’s the ambiance in Eastshade is unendingly enchanting. From the cacophony of crickets and their chorus of song, to the chirping of small birds and the gentle lapping of waves along the coast, the world of Eastshade sounds as good as it looks – aided in no small part by the beautiful string-centric score that brings to mind relaxing summer evenings and lazy mornings on a rural beach.

Eastshade is a warm and thoughtful labor of love – one that proves effortlessly easy to slip into with beautiful vistas, deep world-building at every step and good-hearted, affable townsfolk that are a joy to converse with at every turn. As we march inexorably toward the next generation of consoles, I can still see myself returning to Eastshade on a sleepy Sunday afternoon whereupon the stresses of everyday life fade silently into the background, even for just an hour or two. I think you will too.

Eastshade from Eastshade Studios is out now on PS4, PC and Xbox One.

A combat-free, refreshingly wholesome and decadent exploration focused yarn, Eastshade celebrates the spirit of discovery with aplomb and feels like the closest you'll get to a digital holiday.