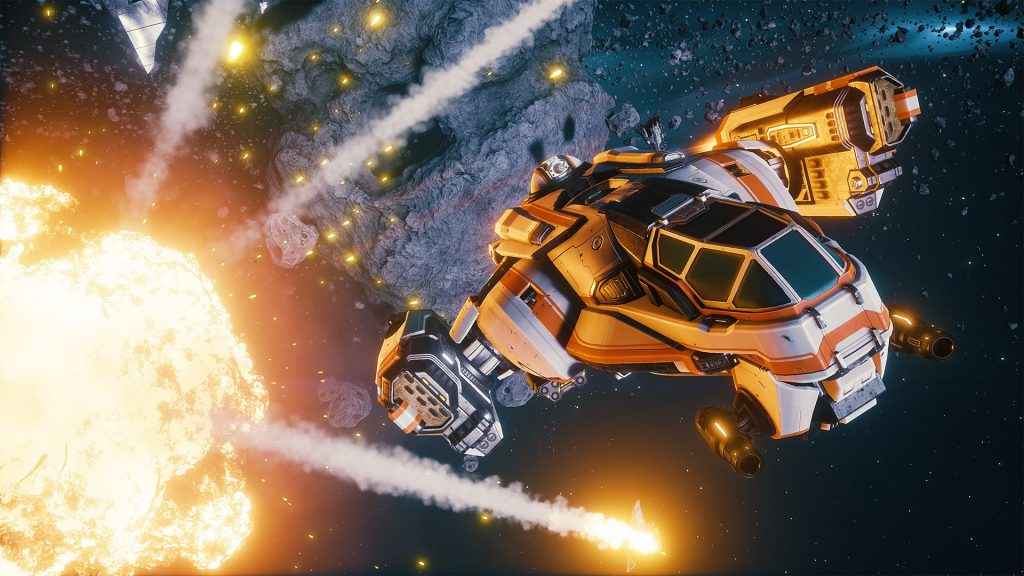 Like any decent roguelike, Everspace does that great thing whereupon when you die, you come back a little stronger and more capable than before except here, it’s done against the background of a space shooter that resembles cult PSOne favourite Colony Wars. Everspace then is the single-player roguelike space shooter you never knew you wanted, but a smattering of odd design decisions ultimately hold it back from reaching that next level for which it so desperately craves.

The premise behind Everspace is that as a wayward amnesic space fighter pilot, you must team up with a sarcastic AI to destroy outlaws, aggressive aliens and scoop up loot en route to uncovering clues about who you are. It’s a hokey story for sure, but as a light basis for the game’s roguelike space shooter sensibilities to sit upon, it serves its purpose well enough and without giving spoilers away, provides an acceptable story reason for you dying and coming back to life over and over again.

As to those particulars of its roguelike space shooter beats, Everspace has players working their way through seven star systems in half a dozen increasingly challenging sectors, destroying enemies and earning credits and resources until they either die or reach the end of the game. Naturally, this being a roguelike you can expect to die, and die often, but as mentioned at the start of this review, dying allows you to come back more capable than before as the credits which you earn can be put nto various perks and upgrades to bolster your chances at doing better next time.

The manner in which progression is handled in Everspace is deft; any area of your ship that you decide to invest in provides a meaningful return. Put money into the sensor systems and you can detect hazards in a system before you jump there, while sticking your hard earned cash into your hull can provide your ship with a great deal more integrity before it (and you) give up the ghost. Beyond your own ship you can also buy new more powerful craft as well, though at the retail price of $10,000 (that’s a lot in Everspace currency), you’ll have to save for a while in order to have the necessary cash to indulge yourself.

And this is the thing – with Everspace being a roguelike in the truest sense, it can be extremely difficult for you to save for a brand new ship early in the game simply because without any sort of upgrade love, your default ship will prove woefully incapable of completing the missions and securing the large quantities of cash that you’ll need to purchase a new ship. Thankfully the act of collecting credits, dying and then purchasing new bits and pieces for your existing ship proves to be a satisfying enough feedback loop and one which gleefully drives you ever onwards to do better as it should in any roguelike worth its salt.

Cleverly, the credit progression system in Everspace makes you choose between short and long-term gain too, as credits can be traded at ships and outposts mid-game for materials to craft new equipment and purchase ready made gear to keep you alive, or, they can be used to purchase the perks and new ships as mentioned previously. Either way, the feeling of micro and macro progress is one that remains wholly enjoyable regardless.

However, this is much more to Everspace than just merely sliding into a star system, killing everything in it and strip-mining the place dry. The first thing you need to consider are the natural hazards that might pop up in each of these systems – some star systems might have black holes that can pull you in and destroy you, whereas others might have aggressive organic life forms that attack your ship if you get to close to their habitats, or energy storms that can disrupt your sensors for example.

Then there are the relationships you’ll have with the other spacefaring folks out there; the G&B Mining Company for instance will leave you well enough alone so long as you don’t attack them, whereas the super angry outlaws and the aggressive Okkar alien protectorate will both attack you but hate each other more, which makes pitting them against each other and picking up the dregs that remain a legitimate strategy to employ.

Furthermore, the scooping up of all those sweet materials and loot is a little less straightforward than you might think simply because it comes from a great many different sources. Aside from destroying enemies and collecting the goodies left behind, you can mine asteroids to gain precious ore and crystals, suck up plasma from plasma clouds and even fly inside abandoned spaceships to open equipment stores to upgrade parts of your ship. Where the real challenge lays in Everspace however, is in the space combat and more precisely, how you manage it.

Though Everspace’s array of natural hazards can present a danger, it’s primarily your spacebound enemies that can bring death to you very, very quickly if you aren’t prepared. Chiefly, it’s important to understand that Everspace’s handling and combat model is centered more around an FPS style experience rather than a traditional model of flight and where this stark difference manifests itself the most strongly is when you’re trying to evade foes that are either stronger than you, or, have the upper hand because rather than swooping and aerially evading, all you can really do is strafe from side to side or boost away which feels less satisfying than it otherwise should.

Speaking about boosting as a means to get away from your enemies, it proves to be a finite and ultimately short-lived way to escape from them as boosting depletes from your energy reserves which in turn is tied to the cannons and guns that you have which means that, even against weaker aggressors, you need to pace yourself with your attacks lest your systems overheat and become offensively impotent.

As such, the systems management side of space combat in Everspace proves to be compelling as it requires wannabe space aces to consider more than just how fast they can pull their trigger finger. Additionally, it is also important to realize that you can evade fights altogether by expending fuel and simply jumping to the next system; though doing so means that you invariably miss out on the resources that were yet to be discovered in the system that you leave behind.

Another area where Everspace drops the ball somewhat is in matters of polish and save functionality. In reference to the former, across a three hour straight session of Everspace on PS4 Pro I had precisely three crashes, which when you’ve been racking up cash to save for a shiny new ship can prove to be fist-chewingly frustrating to say the least. Equally, the save feature just isn’t properly explained or executed correctly either – you can save your game and reload, but for some reason, it starts you right at the beginning of the last level you played without any of your cash or upgrades in place which makes it all feel, well, a bit pointless really.

Though there are enough flaws present to meaningfully detract from its overall offering, Everspace nonetheless makes a compelling case for itself as an entertaining, visually attractive and largely enjoyable roguelike space shooter all the same – it’s just missing that big dollop of extra polish to allow it to properly realize its ambitions.