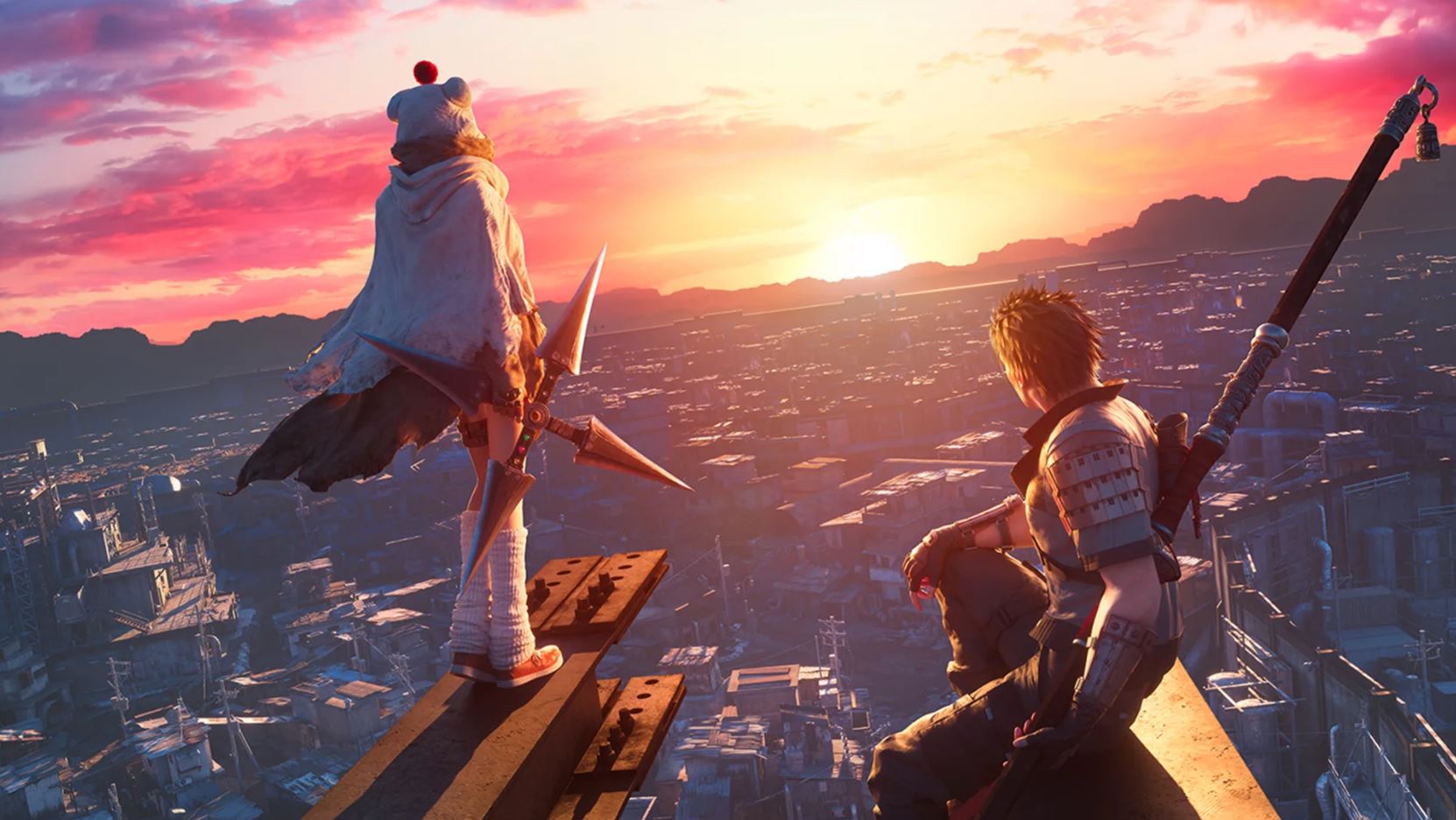 For technical feedback on the game, jump over to the Intergrade review for PS5. This INTERmission review focuses on the story and gameplay additions in the downloadable content. With that in mind, the best part about this DLC is that Yuffie makes herself known from the first second, even if the rest of the cast doesn’t.

I avoid spoilers as much as possible, but setting the story requires references to the narrative in the base game as well as events that took place in the original game. Consider this a spoiler warning, however light or aged the spoilers may be.

INTERmission opens with Yuffie arriving at Midgar, occurring at the same time Cloud and company enter the Shinra Building near the end of the base game. Yuffie hails from the Wutai, a former thriving nation diminished by Shinra Co. Much like the Avalanche team, she seeks out a means to dismantle the rule that Shinra has on the land. But, first, she must find her Avalanche affiliates.

She meets a handful of side characters that guide her through her current scenario, but her main companion is Sonon, a Wutai ninja like Yuffie. Sonon’s main motivation stems from seeking revenge on Shinra for killing his sister. Wielding a staff, he compliments Yuffie’s quick hits with bruiser strikes. 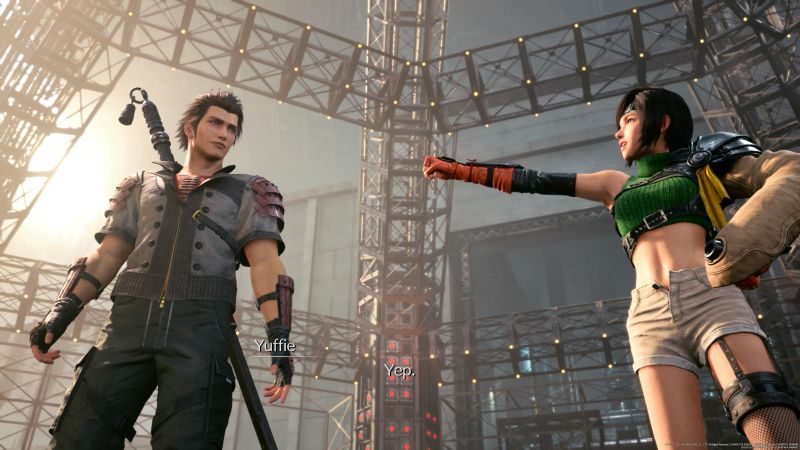 Yuffie stands out as a unique character. Her youthful, imaginative mannerisms take some time to acclimate to, since she contrasts everyone else so strongly. At the same time, she grows on you, especially since the rest of the supporting cast lacks much uniqueness. Specifically, only one other character garners worthwhile attention: Scarlet, the head of Shinra’s Weapons Development.

Scarlet stands out in a way that Sonon doesn’t. All of her characteristics and style come through with her actions and statements, while Sonon only receives information through subtext; the difference between showing and telling in storytelling. Scarlet and Yuffie create a welcome back-and-forth while Sonon acts like a motivational fixture as well as the stoic male trope for the majority of the game. He has a personal moment at the end of the game, but his lackadaisical storytelling greatly diminishes the impact.

In reference to the game’s ending, it not only includes more of the original FF7 spinoffs, but it takes its own approach on them. The final moments of the game also add further context to the ending of the core title. Even better still are some extra tidbits and foreshadowing for the second part of this project. You clearly see Tetsuya Nomura’s influences, but they stay far away from the overcomplicated and chatty style from the Kingdom Hearts series.

I also see other style influences and inspirations, especially with some of the villains, but I’ll leave that for you to experience. 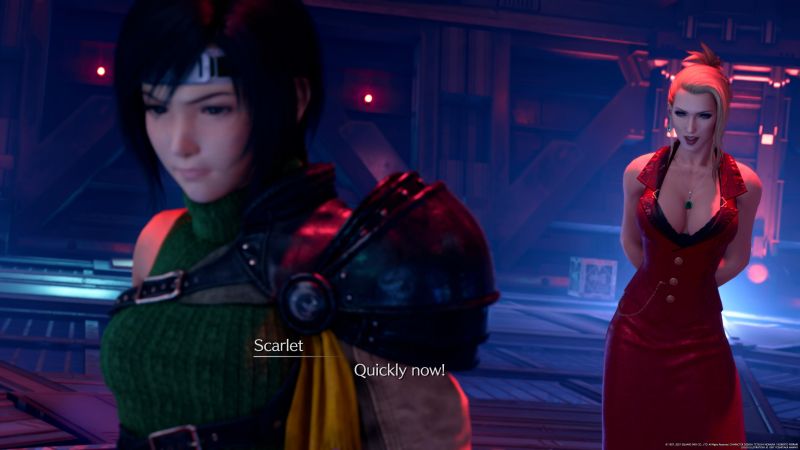 Perhaps the strongest contribution the DLC provides is Yuffie’s combat mechanics. She follows all the same formulas as every other character (using an ATB bar to use skills, spells, etc.). At the same time, her weapon changes the game. The other playable characters have clear separation between physical and magical damage, but Yuffie offers something unique.

The best part about her Ninjutsu is that she can adjust the element attached to it, even though she only has a couple available options. Spells and Skills remain available to her, which still depend on ATB bars, but using elemental ninjutsu minimizes menu interaction. This comes mostly from using Ninjutsu to build up the stagger bar, which formerly happened thanks to spells and skills. Her versatility adds much variety to an already-varied combat regimen, even though she can’t fight alongside the others here. 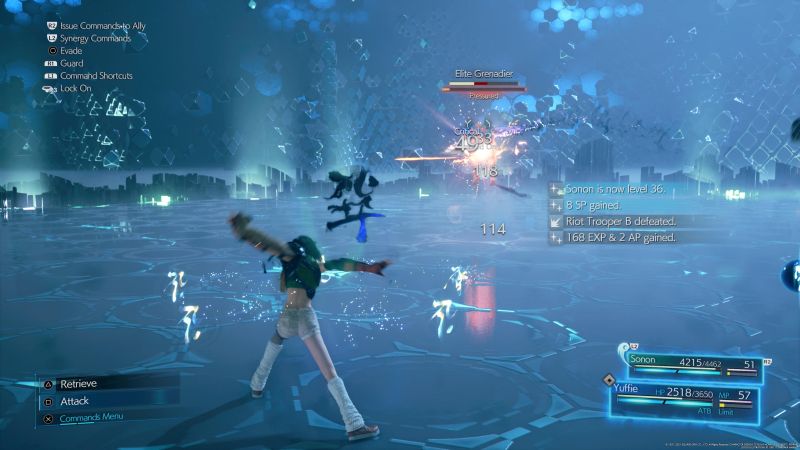 As mentioned earlier, Yuffie’s sole combat companion is Sonan, who uses a staff (much like Cid in the original). While you can’t play as him, you still have him at your disposal. Direct commands come from the battle menu like normal, but pressing L2 synchronizes his attacks with Yuffie’s. If you melee, Sonan uses melee, and the same goes for Ninjutsu.

Synchronization opens up synced skills as well. They basically act like harder hitting versions of the skills that Yuffie already has, but they change the game when needing extra damage before a stagger runs out. These attacks lack variety, but the option helps greatly in harder difficulties and does land a mighty impact.

Fans of the original will recognize what inspires the Fort Condor mini-game. You control units on a battlefield board, each with their own functions and attacks. Using those units, you attempt to overtake your opponent and win the game. While this seems straightforward, one aspect of this mode convinced me the game felt legitimate and worth including in INTERmission. 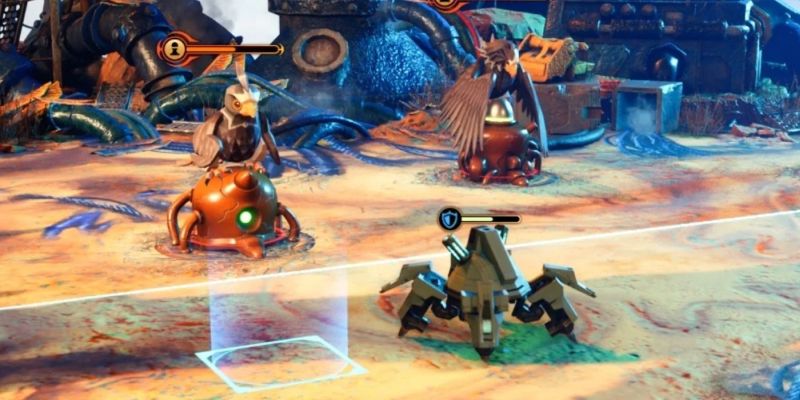 With many tactical and defence games, you simply destroy your enemy units and move to the next round. In Fort Condor, that premise remains, but you also must control the field itself. Certain units allow you to push the front line into enemy territory, giving you extra space to work with. The enemy can also push the front line, making for a compelling tactics mode.

Honestly, I grumbled when Fort Condor forced itself upon me near the beginning of the game. However, the way you must control the battlefield swayed me. Combine that with the fights themselves replacing turn-based tactics with combat that has no downtime, and it’s a recipe for success. Much like the remake itself, Square took a turn based formula and adapted it into inspired free flowing action.

Either way, if Fort Condor isn’t your cup of tea, the game only forces the tutorial match on you. So, you don’t have to play it.

Complimentary Content That Is A Worthy Addition To The Remake

Despite that, Intermission offers something new for everyone in its 3-4 hour main quest. Most downloadable content is missable, but INTERmission delightfully demands your attention by feeling like it adds to the experience the main game offers. Final Fantasy 7 Remake Intergrade: Episode INTERmission is another fantastic reason to get your hands on a PS5.

Little gets in the way of Yuffie's debut to the Final Fantasy VII Remake project. Despite her one-dimensional companion, she takes the foreground and never lets it go. Thrilling enhancements to combat and interesting narrative twists and connections make INTERmission worth playing.