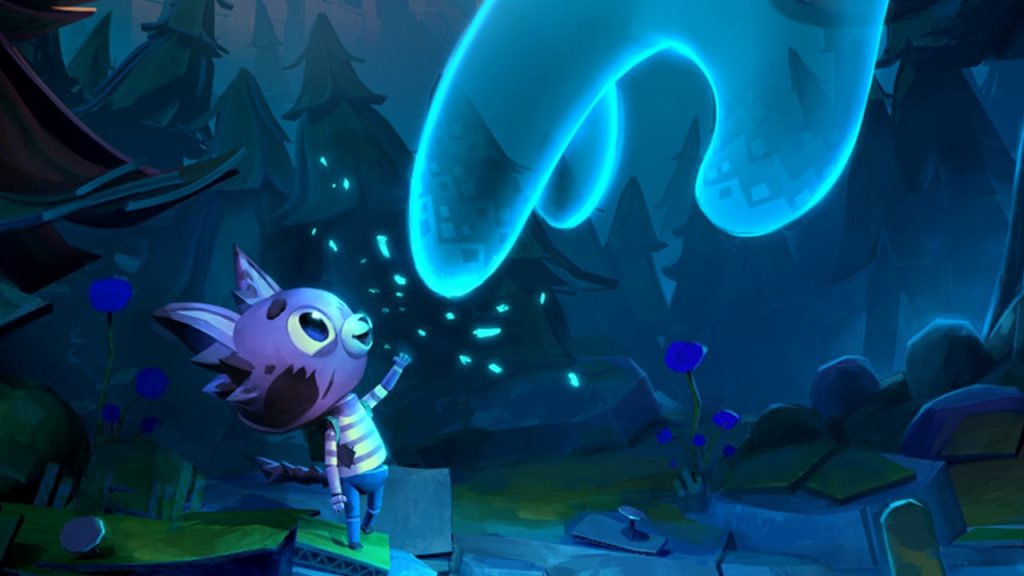 When we think of the immersive possibilities that VR technology can provide us, we often tend to think of immersion in largely technical terms – the ability to process levels of depth that the naked eye couldn’t do so on a TV screen, or the sensation of sound coming at us from all angles, for example.

Ghost Giant, from Swedish developer Zoink Games, has ambitions beyond such superficial delights – leveraging the technical power of PSVR to bolster the connection between player and character and in doing so fashion one of the most touching efforts Sony’s VR platform has seen to date.

Ghost Giant is a touching, heartfelt gem that everybody can play

Ghost Giant begins in melancholy, if relatable fashion. Long before we see Louis, the forlorn little feline-looking boy for whom the story of Ghost Giant largely revolves around, we hear him; desperately sobbing into a pond because his mother is deeply unhappy and none of his friends want to be around him anymore.

It’s here that Ghost Giant permits players the first taste of its magic – allowing them to lean in on somebody in emotional distress, reach out with a big pair of blue phantom arms and touch them, immediately seeing their mood change as if darkest night had gracefully shifted to brightest day in an instant.

Taking place in the fictional French township of Sancourt, Ghost Giant is equal part puzzler as it is an evocative and emotional journey into the depths of despair and the subsequent ascent into hope and good cheer. Controlled exclusively with a pair of PSVR Move Controllers – each representing one of the titular Ghost Giant’s spectral limbs, every level is presented as a diorama of sorts where the player can rotate from a fixed position and interact with elements in the environment, solving puzzles and other such conundrums to help Louis and his friends along on their way.

Befitting the twee presentation of its paper-craft styled dioramas, the puzzles that you’ll solve in Ghost Giant are of a quaint sort; often requiring that you complete such tasks as pulling massive droopy flowers out the ground, painting a picture or operating a crane to secure a valuable crate of sunflower seeds. Notably, one delightful task had me blowing into the PSVR’s mic, creating a gust of wind which in turn scared away some birds that were loitering on the road, blocking Louis from getting past.

Aiding matters further is the fact that most of the things you can interact with in the world are highlighted by a golden sheen, making it clear what you should be doing next and thus making Ghost Giant easy to get into for players for all skills and ages. Further cementing Ghost Giant’s player friendly nature is Louis himself, because you should find yourself stumped, a quick good-natured tap on his noggin will cause him to give you a hint about what you should be doing next, helping to keep progress through the game pleasingly brisk as a result.

There are limits to what you can interact with in Ghost Giant, however. You cannot, for example, pick up any of Sancourt’s denizens and throw them around the place because, well, not only would there be no real point to doing that but you’d be a bit of an asshole for doing it – something which would be arguably at odds with Ghost Giant’s gentle tone and whimsical themes.

Owing to the relative simplicity of its puzzle solving and the heartwarming core of its message, Ghost Giant is an invariably good prospect for the young ones to get stuck into too. Louis, his family, friends and the numerous strangers he encounters on his journey are all a lovable bunch of animal-folk and kids will certainly get a lot of enjoyment from the magical journey that Ghost Giant sets them upon.

Though Ghost Giant isn’t an especially long endeavor by any conventional measurement – the main story scenario can be beaten in between 3-5 hours depending on how quickly you solve the various conundrums strewn throughout its duration, there are a number of additional hats, secret items and tasks (such as throwing a basketball through a distant hoop, for example), to keep folks busy after the credits have completed their roll.

Ghost Giant also ranks as one of PSVR’s more attractive efforts too. Doing a great job of leveraging the VR platform’s head-tracking technology, Zoink Games latest allows players to peek into people’s houses, peer around trees and lean around buildings, while the paper-craft veneer of the world fondly recalls the likes of MediaMolecule’s superb Tearaway.

What Ghost Giant might lack in length, it makes up for in emotional resonance

The star of Ghost Giant though, is clearly Louis himself. When you fist bump with his tiny little paws, ruffle the fur behind his eyes or playfully poke Louis he responds with adorable innocence; simply happy that his new towering phantom friend has taken an interest in him and his life. Further cementing Louis presence is his voice actor whom never fails to convey such a massive range of varying emotional states with both verve and sensitivity.

Ghost Giant invariably has you leaving with a wide smile on your face – giddy that, though only within the auspices of its charmingly crafted digital realm, you have acted in benevolence – helping another to a far happier disposition than they were found in at the beginning. In its relentless pursuit of radiating happiness, Zoink have arguably crafted one of PSVRs most feel-good, and intriguing titles.

Ghost Giant might not be the most deep or taxing title on PSVR but it does have an abundance of heart and soul-reassuringly large amounts of goodwill. Surely then, in a world that we keep being told is increasingly awful, that counts for something more than just the sum of mechanical and unfeeling parts that so many games are often content to be.

An eye-opening puzzler that boasts an attractive aesthetic and charming cast of characters, Ghost Giant empowers you in a very unique way - you actively feel like you're making someone's life better; how many other games can claim the same?