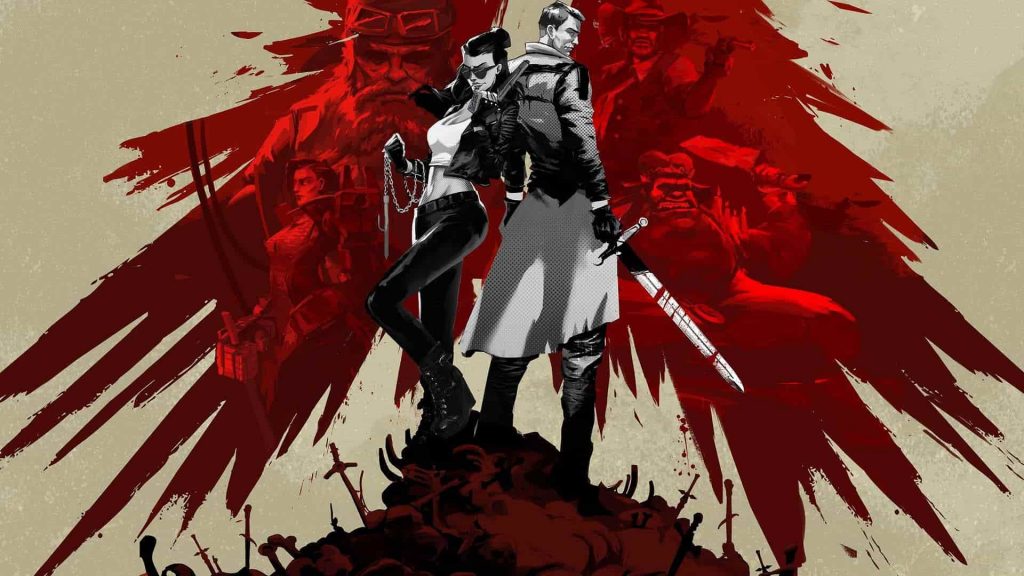 When I was asked to review God’s Trigger, I will be honest with you, I had never heard of it. I took a quick glance at the trailer and knew immediately it would be something I would enjoy. It had a hint of Hotline Miami to it and I adored that game. Blood, guts, violence and death everywhere, what’s not to like? I just hoped that God’s Trigger would be good, have something a bit different to offer, and therefore stand out in the top-down twin-stick shooter genre.

Story-wise, God’s Trigger is quite simple. You play both a demon and an angel, called Judy and Harry respectively. You are trying to stop an impending apocalypse, using murder, death and just generally killing anything that moves. The story of this game takes a back seat really and just acts as a vessel to propel you through its numerous stages. Most of the story is told via nice hand-drawn comic like screens between levels, it’s all a little basic but pleasant enough.

Though God’s Trigger is inspred by Hotline Miami, being very similar in a lot of ways, it does do a bit to separate itself from its obvious inspiration. Firstly it’s a lot more forgiving; you have checkpoints littered through the levels so if you die you don’t have to do the whole level again. It makes the levels less frustrating and alleviates the need to perfect each stage in one go. It gives the whole game a more arcade-style feel and perhaps will be suited to people who found Hotline Miami too challenging.

The levels play out like you would expect – get to the end of the level by slicing, dicing and shooting your way to the finish. All the hallmark traits of these titles are there too, such as destructible environments, loads of enemies and a truckload of weapons. The idea is that, essentially, you storm through the levels as quick as you can, killing foes strategically and trying not to get splattered.

As you paint the various locales red with your adversaries blood, you will collect XP and will be able to upgrade your abilities. These unlock as you level up and give you various options to mould them to your play style. Each level of ability gives you three options and you can select one of them. Quicker cooldowns, more range more speed, it’s all there and provides ample options when character building. You can also collect perks throughout the game which change your character, though only one can be selected at once though and they are mostly passive.

Two Heads are better than One

A unique feature that I really liked was the fact that you play both characters at the same time, and can swap at any time depending on your current needs. Due to the characters having different abilities you will need to do this often and some parts of levels can only be overcome by a certain character’s abilities, so you will need to use them both to succeed. Some levels have a slight puzzle element to them, needing switches to be thrown or a task to be completed. Combine that with needing to use both characters at certain times and the levels never felt repetitive or stale.

Your arsenal in this game is vast. There are weapons everywhere too; enemies drop them, you can find them in chests and they include all manner of murderous tools. Crossbows, bats, dynamite, guns and even special weapons which are located in hidden treasure chests. I even found a holy hand grenade which brought a smile to my face. Who doesn’t love a holy hand grenade? Using these weapons correctly, picking the correct tool for the job and combining that with lethal strategy is often the difference between completing the level or seeing that death screen for the 90th time.

A really great feature, which again makes the game a more arcade-style experience, is its lock-on feature. You can lock on to the nearest enemy, even in the next room, and when you throw or fire a weapon it will, most of the time, vanquish them. To take this a step further you can even select multiple enemies and the lock on will step through them sequentially. This means you can plan your progress through a room while standing outside and then burst in and hopefully, assassinate everyone in a beautiful John Wick style massacre. It gives the game a more strategic feel and I really enjoyed that aspect of it.

Every level awards you with a rank at the end based on several factors. Your speed, how many times you die and your highest combo will all be graded and you are given an overall rank. I got ‘S’ rank a few times so I think the rankings are quite generous – especially considering you can return later with all the skills unlocked and do much better than when you play the levels the first time. If you’re that way inclined, I think there will be a fair bit of replayability if you want to ‘S’ rank all the levels.

The flow of God’s Trigger is broken up quite nicely with some nice boss fights and mini-boss fights. Instead of the game being exclusively set around frantic room clearing action, God’s Trigger is peppered with some nice set pieces and some clever boss battles. I really enjoyed the change of pace now and again with these sections as yhey need a more measured and thoughtful approach, rather than the fast, run and gun that fills out most of this violent game. There is quite a bit of variety sprinkled into God’s Trigger that I was not expecting, it was refreshing and gives the game a unique feel.

While the graphical presentation of God’s Trigger is very simple, I quite liked the cell-shaded style to it. I enjoyed the comic book style cutscenes and story sections, even though they were basic and short. The whole game has a very stylised look to it, that will not please everyone but is charming to look at nonethless.

The effects are done nicely too; the explosions are brutal, the blood sprays everywhere and the destructible environments fill the air with debris as you glide through each room. The various environments are varied, well designed and some of the locales you fight through are in equal parts striking, dingy and beautiful – especially when you have painted your enemies blood throughout.

The Sound of Death

The soundtrack to Gods Trigger is very good. When you die in a game a lot a soundtrack can start to grate on you. I never experienced this once and enjoyed all the music on offer. It was catchy, crunchy and propelled me through each of the game’s stages. The sound effects are also done well too; the squelching of your victims, the gunfire, the explosions are all realistic and kept you immersed in the game. The whole sound design of this murder simulator is handled very well and I appreciated it.

No-one wants a buggy, broken game now do they? I can happily confirm that I had zero issues whatsoever with Gods Trigger. It ran very smoothly, I had no framerate issues or stuttering and I experienced no game breaking bugs or glitches and could not find a single issue. The restarts after death were quick and everything just worked. It’s not often it happens but the performance of this game was flawless. A credit to the developer and the QA team.

While on the surface it seems to be a Hotline Miami clone, God’s Trigger has a few things under its hood to make it stand on its own. Its swappable characters, abilities, perks, unique set pieces and boss fights really break up the fluid, fast murderous sections and give the game a unique feel. Its well designed lock-on system give it a slightly strategic quality where you can plan your way through each room and kill in style, while the generous checkpoint system will stop people getting frustrated and mean less time retreading your steps.

The graphical design, while not everyone’s cup of tea, is very stylish and bright. The sound design is very well done and its performance was faultless. I find it hard to say anything bad about this little title, I really enjoyed my time with it and I think it will appeal to a lot of people. It’s an enjoyable game, that’s not too expensive and has a lot going for it.

A fast, fluid murderous romp through a comic book style world. Gods Trigger does enough to stand out in this niche genre of top-down twitchy twin-stick shooters.