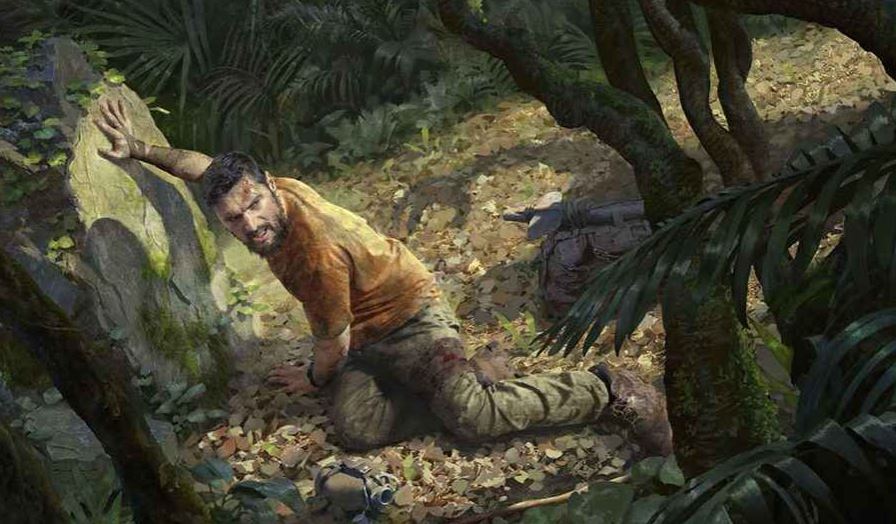 Green Hell PS4 review. For us ‘civilised folks’ with our pumpkin spiced lattes, $1,000 dollar plus smartphones and other such riches that spew forth from the bounty of our first world fortune, the notion of stumbling into a jungle far away from such creature comforts and where everything wants to murder/eat/violate you, is plausibly an unsettling source of horror for many.

With such fear enshrined on the silver screen by ‘video nasty’ esque pictures as Cannibal Holocaust and more recently, Eli Roth’s The Green Inferno, it was only going to be a matter of time until this nightmarish scenario would be realised in videogames as well. Stepping up to the plate to ensure that sleep is a distant memory for PlayStation gamers everywhere is Green Hell, which not only manages to encapsulate that fearsome premise, but also boasts a substantially clever sandbox survival experience wrapped around it too.

Though there is no shortage of decent survival sandbox efforts on the PS4 (hello there, Rust and The Forest), there’s never been one that tackles a survival horror scenario which takes place in the realistic setting of the sweltering, emerald hued jungles of the Amazon. Left alone in the depths of the jungle with no equipment, food or seemingly hope for staying alive, it’s up to you to work out how to survive off the land as you fashion makeshift spears, bows, campfires, shelter and a whole lot more besides, all the while trying to track down your missing fiancé. 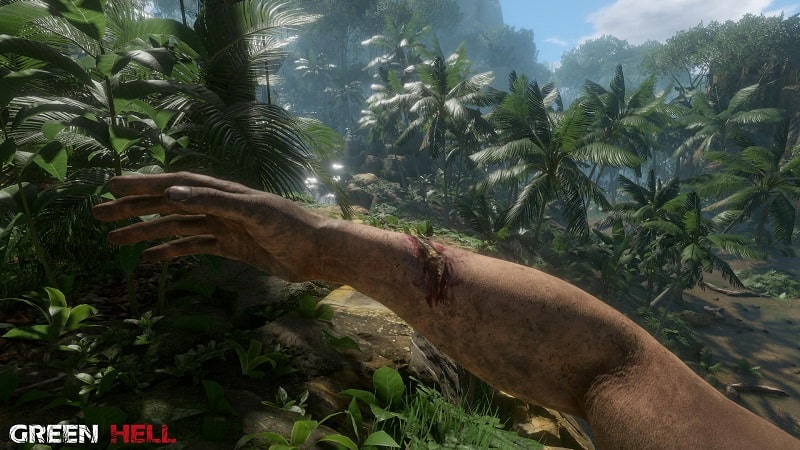 None of this will come as any great surprise to those of you who are well interned in the ins and outs of the survival sandbox genre, but where Green Hell does things a little differently is in how it deals with the minutiae of those sandbox survival beats. Building a campfire and setting it alight for example, isn’t just a case of combining chunks of wood and tossing a fire onto it.

In Green Hell, you must instead not only have the correct amount of wood to support the fire, but also craft a hand drill with a plank, small piece of wood and dried leaves to get the fire started. Likewise, animal traps require a corresponding level of cleverness to construct, with the wood being fashioned together with the correct bait being placed inside. Though it might seem like unnecessary padding, I certainly appreciate what developer Creepy Jar is going for here in terms of constructing a more authentic survival sandbox experience that has you going through a series of believable motions, rather than just interacting with a bunch of cold, tiled menus.

Speaking of authenticity, Green Hell has more than a few tricks up its digital sleeve in this regard. The first of these is how it deals with your wellbeing; both physical and mental. Physically speaking like many other games of this ilk, there’s a fair amount to micromanage. Whether it’s your thirst, hunger, disease or physical injury, there’s a lot to keep on top of unless you want to end up six feet under. 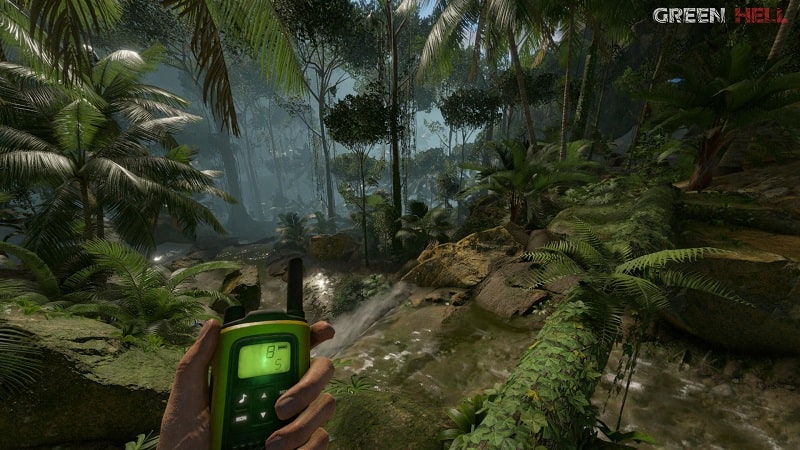 Again, Green Hell succeeds in deftly immersing the player – a physical wound for example can be diagnosed by simply looking at your limbs and identifying the wound you have received, allowing you to treat it accordingly, while a handy smartwatch provides a broader and easier to read at-a-glance impression of your overall health.

Quite simply the level of sophistication which Creepy Jar has infused into Green Hell’s survival sandbox beats is highly impressive and scales appropriately according to the player. For instance, if you’re happy just living off the land as you attempt to get closer to your goal, nibbling on mushrooms and critters along the way you can do that (though you’ll need to research what’s safe and what isn’t for consumption). While more invested players, can put roots down in the jungle by building a hut, start crop farming and build an arsenal of primitive weapons to scare away any of those who might try and take it from you.

And this is the thing about Green Hell too, there’s quite literally danger around every corner. Whether it’s parasites in the water (learning how to boil water early on is absolutely a good thing to understand), poisonous snakes, massive panthers or hostile tribes folk, Green Hell’s depiction of an Amazonian jungle that is as beautiful as it is deadly is absolutely on point. That said, if you’re new to the genre, Green Hell provides a number of different difficulty levels which scale the threat to your character quite substantially. 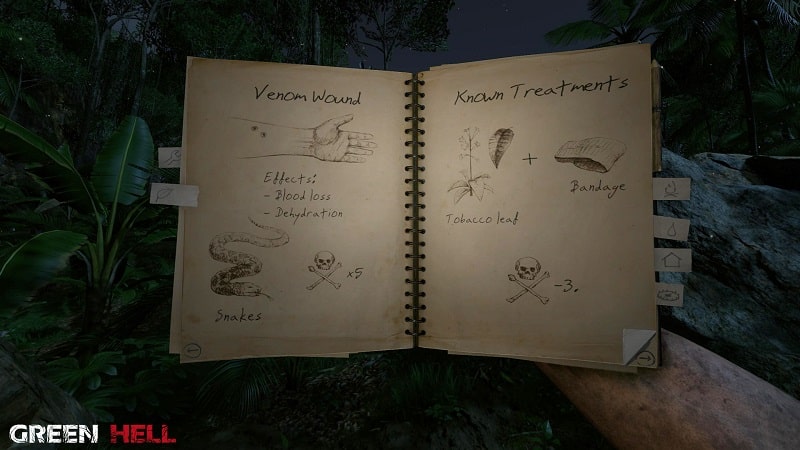 Like other offerings in the survival horror genre, Green Hell trades on the constant, incrementing feeling of reward and satisfaction when you do something right for the first time. Whether it’s cooking your first meal or simply just being able to drink clean water for the first time because you’ve now worked out how to boil it correctly, it all feels like a proper achievement that feels palpably exciting.

A Survival Sandbox With A Psychological Horror Streak

As much as Green Hell crosses the t’s and dots the i’s when it comes to the design bedrock of its survival sandbox beats, so too does it also weave in its narrative beats as well. Though I’ve touched upon the physical challenges that you’ll face as you attempt to stay alive in the jungle, Green Hell also torments the player psychologically too with all manner of hallucinations and visions that illustrate that Green Hell is as much influenced by Conrad’s Heart of Darkness as it is by the gruesome cannibal spectacles of the silver screen.

By having this narrative throughline that is underscored by a psychological aspect that isn’t entirely dissimilar to what The Forest achieved previously, Green Hell meaningfully separates itself from its narratively aimless genre stablemates. 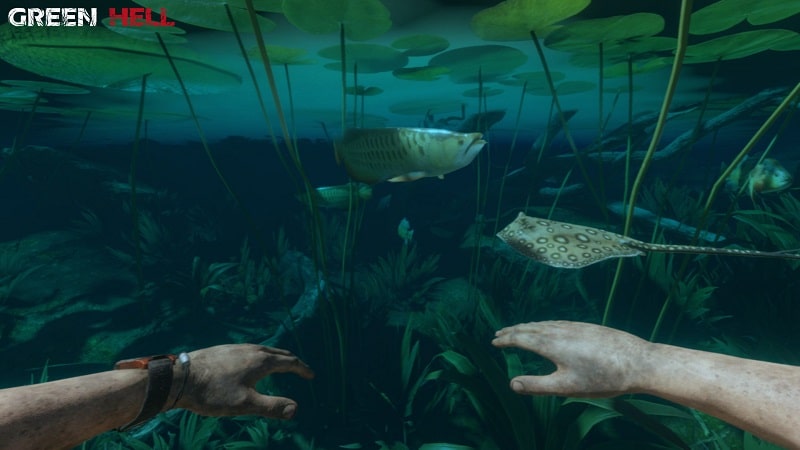 This isn’t just some meandering survival sandbox (though such modes are available in the game for purists), instead this is a survival effort with real direction and purpose where survival is a means to an end, rather than just the end itself as your constant communication with your estranged fiancé becomes more and more desperate the closer you get to the end of the game. Equally, the story steeped tutorial mission does a great job of not only introducing you to the narrative, but also in how it shows you the ropes, too.

If Green Hell’s single-player component wasn’t impressively broad enough in its scope and execution, then the online multiplayer mode likely will satisfy those looking for some more cooperative survival shenanigans. Supporting up to four players, Green Hell’s cooperative mode thrusts players into the centre of the game’s survival sandbox to see how long players can work together in order to survive.

Devoid of the story structure which keeps the single-player side of things hanging together, Green Hell’s cooperative multiplayer mode represents a nice distraction where a lot of fun is to be had as players struggle with not just the environment, but also one another as they strive to survive. 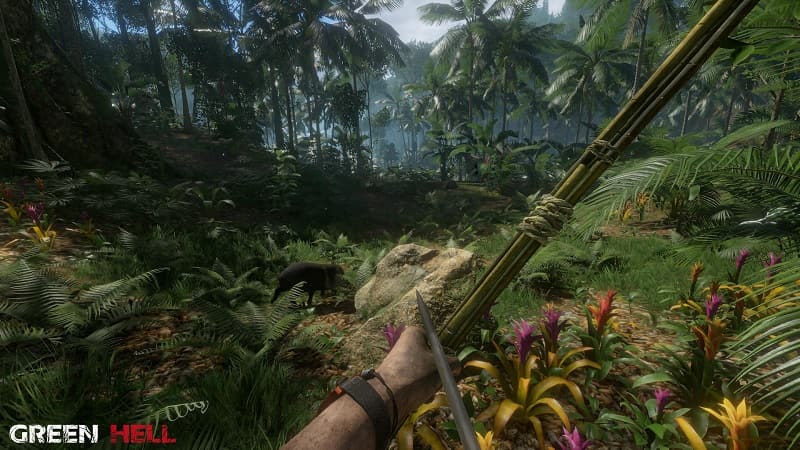 Where Green Hell starts to put a foot wrong however, is when it comes to the technical side of things. Though Green Hell performs perfectly fine for the most part, the general jankiness of the game engine starts to poke through from time to time, with objects that occasionally fall through the floor when placed on the ground and certain assets that seem to vibrate when placed in close proximity to other assets. One odd bug in particular produces a *huge* amount of screen tearing during the tutorial that is uncomfortable to look at, but when you get into the game proper, disappears completely.

Despite the seeming jankiness of the game, it’s also important to remember that Green Hell is actually doing a whole lot of interesting simulation that you just don’t se in any other games of this type, such as different animal behaviours, dynamic weather and how the world reacts to you and your attempt to live off the land. Still, if Creepy Jar have shown anything in regards to Green Hell on PC, it’s that the developer frequently keeps the game updated, so it’s reasonable to feel reassured that much of jank seen in the current version of Green Hell will be ironed out sooner rather than later.

Green Hell does something quite unique with the survival sandbox genre, that much is for sure. That dogged focus on fashioning an authentic survival horror experience set in a real world location is both palpably tense and enjoyable – thanks in no small part to the narrative beats that support it. Though the game could certainly use a patch or two, developer Creepy Jar have nonetheless offered up a delectably meaty chunk (if you’ll excuse the pun) of survival horror madness anchored in reality that everybody should play.

A different kind of survival sandbox, Green Hell's anchoring in a contemporary place together with its narrative help to separate it from its more aimless seeming brethren. Though some additional polish is required, Green Hell nonetheless is still one of the better survival sandbox experiences to come along in a good while.