Mythic Ocean Review (PS4) – Described as an adventure where you’ll befriend a pantheon of gods and “make choices that shape the birth of a new world,” you could be forgiven for thinking Mythic Ocean is going to be an ambitious odyssey of a game. Furthermore you’d be naturally very surprised to hear this bold mission statement is coming from a tiny three-person team.

Mythic Ocean is almost exactly as Texas-based developers Paralune say it is. However, it must be said that “adventure,” as applied in the description, is a bit of a stretch. Far from a journey, what you get in reality is more of thinly populated meet and greet absent any activities. However, there is something bizarrely serene and uniquely comforting about Mythic Ocean that demands attention.

Mythic Ocean PS4 Review – The Serenity Of Nothing

Mythic Ocean immediately plants the player in a cosmic lookout, peering into the universe. Without as much as a stroll in the archives of this otherworldly abode, you are thrown into a far more familiar biome. The rest of the game, as the title implies, takes places in the ocean. Contrary to what “ocean” would normally imply, the game world is incredibly small.

Your first contact in this mysterious world is an eel, who informs you that this is the cycle of creation that decides upon who will be the new god. With no recollection of who (or what) you are, you proceed to venture back and forth between five other compact game areas, conversing with prospective deities and other chatty sea dwellers. 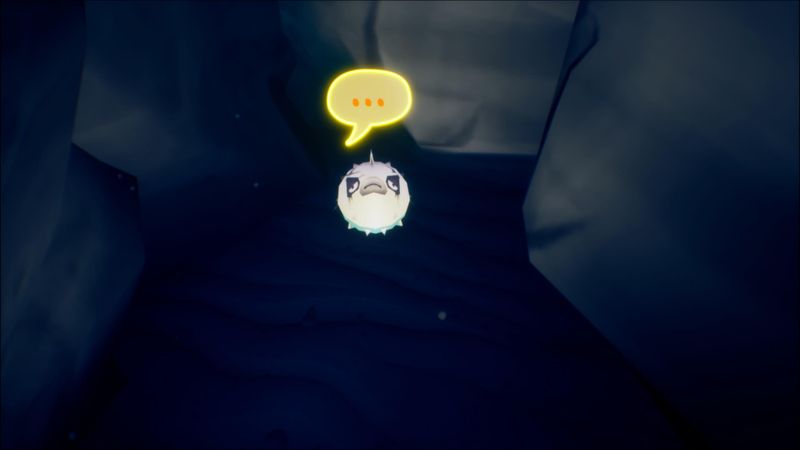 Each of the gods in this world has their own short story arc, the details of which are determined by the choice of the player’s dialogue options. They could grow to like you, and perhaps grow more powerful in the process. The most powerful god will become the creator of the new world, although how you determine this is rather indirect.

After liaising between all parties for about three hours, you return to the eel to witness the birth of a new world, and behold what your choices have wrought unto it. That’s really the long and short of Mythic Ocean on paper. At the same time however, there’s a meta layer that lies beneath the divine aqueous network.

Mythic Ocean is like any other choice based game, in that different choices lead to a different set of outcomes. Where this sea “adventure” differs is in the nuance of choices. Unlike other games of this ilk, the difference between your dialogue options isn’t always overt. 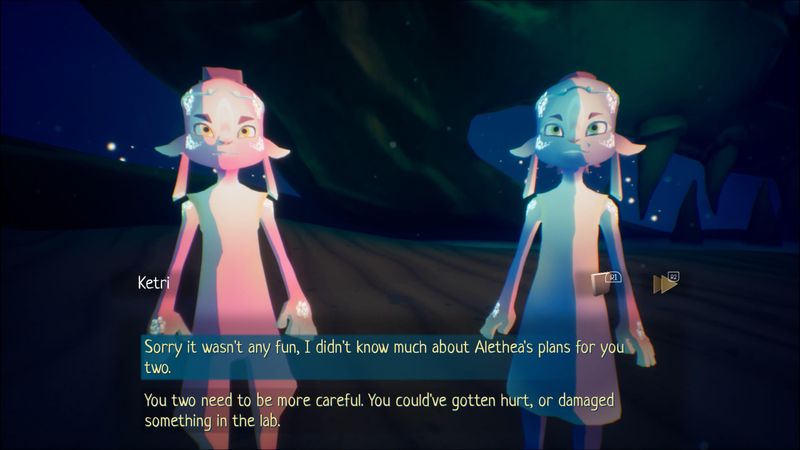 At times the difference in your choices will be obvious. On one hand you might have to choose between sending a character away from their abode or tell them to stay. On the other hand there might be no obvious difference between the dialogue options at all. Only when you evoke the ire of a character with one of these options do you realise what’s really going on.

It’s not what you say, it’s how you say it. The difference is sometimes in the structure of the sentence. You can’t help but think that Mythic Ocean is some sort of low key sensitivity training. Through trial and error you learn what will elicit a positive response by predicting how characters will react.

Rather than an adventure, it would be more accurate to describe Mythic Ocean as a social simulator. Whilst such a label might not be the most exciting to the average gamer, there is definitely a rewarding feeling to be harvested from this process. Moreover, it feels strangely cathartic and calming as you see it through to story’s end. 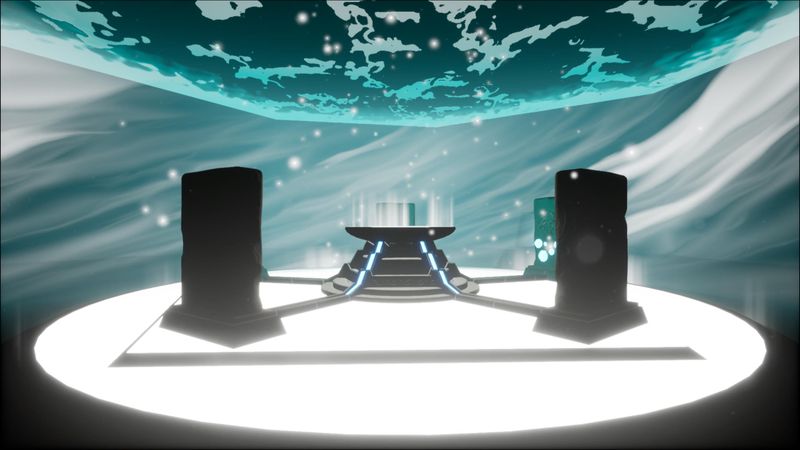 If you’re not a “choose your own adventure” sort of person, then there really isn’t much else to stimulate you. This is in large part because the other (and optional) part of the gameplay simply isn’t fun at all.

Mythic Ocean’s lore is discovered through finding journal pages found through various portals to an inter-dimensional library. Whereas you could potentially get a kick hunting down the portals, the actual page hunting is a cruel joke.

You must find a barely highlighted tiny piece of paper amongst gigantic stacks of books upon each portal visit. If you’re lucky, it will just be on the floor. However, the illusive manuscript is often somewhere in the shelves, and not easily spotted. As the mindless minutes of fruitless searching goes by you might just wonder; “what psychopath made this? This isn’t fun”. 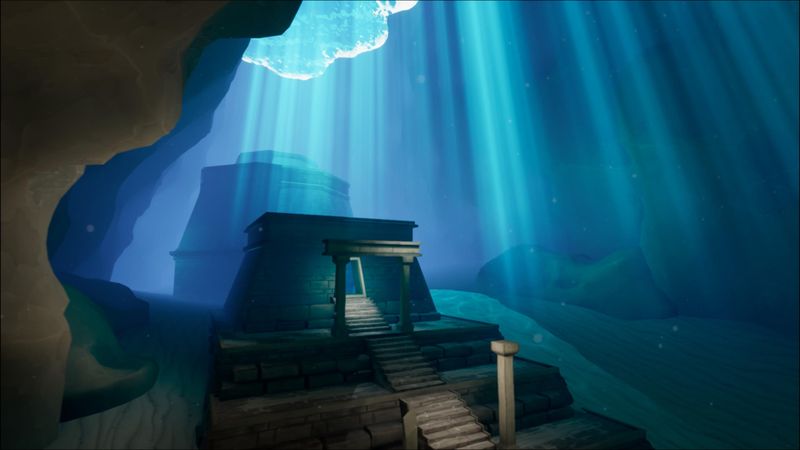 Cel Shade By The Cel Shore

Mythic Ocean’s tragic librarian mini game aside, the experience is mostly a serene one. Additionally, the effect is greatly assisted by the lovely cel-shaded art style. The cartoonish topography accompanied by the ambient soundtrack will certainly put your soul at ease, as you meander around the calming blue waters.

The only noticeable graphical blemish was spotted very early in the game. In there initial lookout location, the reflections on the library floor tended to judder and glitch about as the camera moved. It certainly isn’t an accurate reflection, and was unfortunately obtrusive to the view.

Despite that initial rough edge, the biomes that follow are generally agreeable. Occasionally you might find your sense of wonder struck by the scenery in Mythic Ocean, but it certainly couldn’t be reasonably argued that this stands out as any sort of visual showcase. 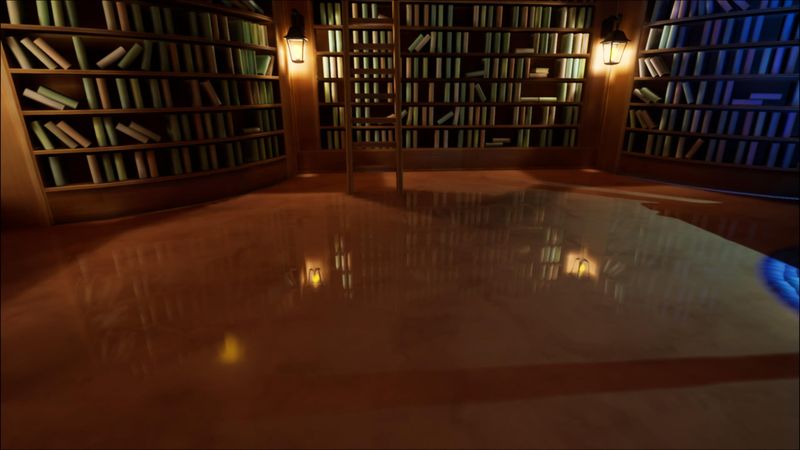 A Tranquil and Innocuous Social Sim

Despite being a small and innocuous game full of nothing, Mythic Ocean does manage to strike a chord. Faced with subtle choices and epic consequences, you can’t help but really feel a weight to your decisions. Moreover you somehow feel bettered by the experience.

Mythic Ocean can hardly be called a challenge, but what it does offer is soaked in tranquility, and an incredibly accessible to play. Furthermore, with multiple endings to explore, it is very replayable. All in all, Mythic Ocean might just be one of most easily playable non-adventures we’ve ever had on a PlayStation console.

What Mythic Ocean lacks in almost every department, it does go a long way to compensate you with one of the most serene experiences you can get on a PS4. The core action is far from adrenaline pumping, but you might just come away feeling a small but cathartic amount of personal growth. With multiple endings that depend on your choices, Mythic Ocean will temp you back into its tranquil blue waters again and again before you're too horizontal to function in real life. Aside from a tedious library mini game and a few graphical blemishes, Mythic Ocean is probably just a little too small to be considered great, but it's certainly a worthwhile experience that will be swimming in your memory for some time after playing.