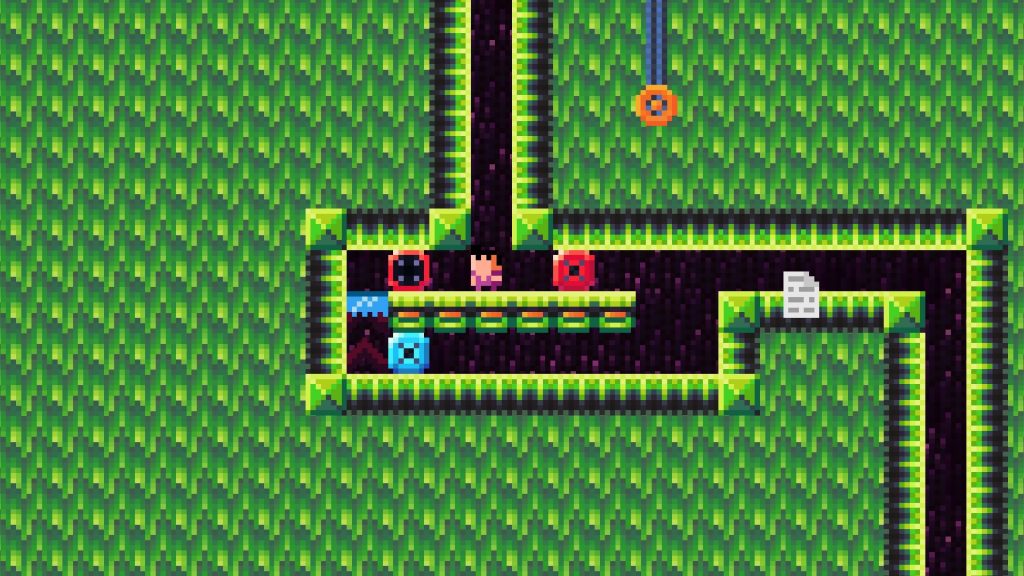 Games have gotten fairly easy these days. With all of the hand holding tutorials, constant reminders for mission objectives, and extremely linear game design, sometimes a gamer just wants a little bit of challenge.

We have had some great rage-inducing platformers in the past, such as Super Meat Boy, VVVVVVV, and You Have to Win the Game, and developer Cat Nigiri is hoping to add its name to the list with their uniquely controlled, stress inducing, nail biting, soul-crushing game known as Necrosphere Deluxe.

If you want a challenge, you’ve come to the right place because Necrosphere is definitely one of the more difficult twitch platformers I’ve played. The game starts with a fairly simple and forgettable premise of your character falling to a shooting tragedy and you wake up in the Necrosphere; a limbo like place that you can escape from, but it will take all of your will to do so.

After the brief intro, the only real thread that keeps the story going are some hint style pages found throughout the game that further the plot slightly and offer some idea of what to do in the current area. But you’re not in this game for the story, you’re in it for the gameplay!

And Necrosphere Deluxe does not hold your hand; even to the point that they do not even tell you how to use their two button control scheme at the start of the game. I honestly took about 30 seconds at the start to even figure out how to move which I guess was my introduction to the madness of this game.

The devs wanted to add an extra spin on their game so they gave it a unique 2 button control style that I think will be quite polarizing for gamers. Players will have to use the R1 and L1 button to move left and right accordingly. This actually seems like a different and an efficient way to move your character, which actually adds a fairly good feel of control and response.

The main trick of it all at the start is that all you can do is move left and right, so jumping is left to the job of bubbles and colored orbs that can be found in helpful positions for the upcoming puzzles. You also unlock a few more options for your 8-bit counterpart to move about, but that’s where my main issue with the simple control scheme lies.

When you are tasked with maneuvering while bouncing on bubbles and around fire traps with left and right, not much can go wrong. But when you add in extra movement like the ability to dash and use a jet pack to boost into the air, a very serious issue arises.

With only two buttons available, the control scheme quickly becomes cumbersome and crowded with more tricky maneuvers requiring the use of all of your abilities and one fluid motion. The dash requires a quick double tap of the direction you want to jump in which by itself is fine, but can become cramp worthy when playing for long sessions.

The jet-pack also has the issue of hogging your buttons as it requires the player to hold both of the buttons simultaneously to jet straight into the air for a short while. Now, I feel the devs did try to alleviate this slightly by offering the option called “extra buttons” in the option menu, but all this does if give you a second set of awkward buttons mapped to the left D pad direction and the circle button for their respective directions.

I know they probably wanted to do something unique with their control scheme, but I feel like the lack of button just hinders the player and adds a unnecessary level of difficulty. And if that’s what they were going for then… “well played Cat Nigiri”

Control issues aside, when you get in the zone, the game has a pretty good flow to it. It has a more unique take on the twitch platformers and trades in zones and levels for a metroidvania type map which is actually kinda refreshing.

After retrieving your different movement abilities you find your way back to a warp zone which then takes you back to the start where you can use your new abilities. Each zone has its own color palette and unique music which mixes things up with a nice change of pace.

Unfortunately the 8-bit style art and simple layout does make each zone feel kind of samey, but its still much better than seeing the same color palette and hearing the same music for the entire play through. The music was a nice touch and while limited to a hand full of tracks, they were quite varied from popy synthwave, to classic action adventure anthems, to a slow and disturbing ambient tune with muffled voices talking – which was my personal favorite.

But, of course, this game wouldn’t be anything without mind bending, finger busting twitch platforming which it does in droves. The puzzles for the most part are clearly communicated, well thought out and actually have a few really unique and interesting solutions that will take you more than a few deaths to figure out.

Everything from fireballs and falling blocks to spike pits and even zombies are all included and it uses them in great variety and offers fair checkpoints after every challenge to alleviate a small bit of the ever building stress. That’s not to say they are all perfect though as I found a few had huge difficulty spikes and I eventually ran into the one that ended my playthrough.

For most of the puzzles, a keen eye, calm hand, and a handful of deaths will get players thorough most of the challenges up until late game. The one puzzle that absolutely destroyed me really came out of nowhere as I had not really seen anything like it in the game up until that point. Most challenges are based on move, jump, wait, move, jet, dash, victory since they tend to allow for pause in the middle of a attempt. But this one puzzle I ran into had you traversing a room vertically off moving platforms that were constantly crossing fire beams; so once you start the insane mixture of dashing, jumping, jetting and moving, it was victory or death with absolutely no breathing room.

And this is where I have to mention the controls again as this was the culmination of the frustrating design. Attempting to move left and right, double tap directions, to dash, and hold both buttons to jet upwards all while trying to land on platforms around fire and spikes really just pushes everything over the top. It is just too many actions for a 2 button setup and ends up feeling more broken than unique.

If they maybe offered a control scheme where R1 and L1 were movement – and the triangle controlled your jet-pack and square controller your dash – Necrosphere Deluxe would feel a little more natural and control better, but again, that may just make the game too easy at that point so this was probably a design choice from the start.

So ultimately what does that leave us with? Necrosphere is hard. Like really really hard, but those fans of crazy fast and intense twitch platformers are probably gonna find a lot to chew on here. The 8-bit style is simple and colorful but doesn’t break any molds. The music has a good variety for the few tracks that are in the game.

The metroidvania style level design adds an interesting and fresh aspect to this style of game. There are definitely some later game difficulty spikes and the controls may feel downright broken at times for some players that are used to a typical control scheme, but Necrosphere Deluxe does give you a fairly good period of time to adjust to the flow of the two button scheme. If you’re looking for a new challenge and something that’s a little more unique than stuff in the past, you should give Necrosphere a closer look.

An 8 bit twitch platformer with a unique 2 button control scheme that will be polarizing among many players, Necrosphere Deluxe offers a good variety of puzzles and hazards that blend with a metroidvania-styled world to give the game an interesting flow and design that is ready to challenge even the most veteran players.