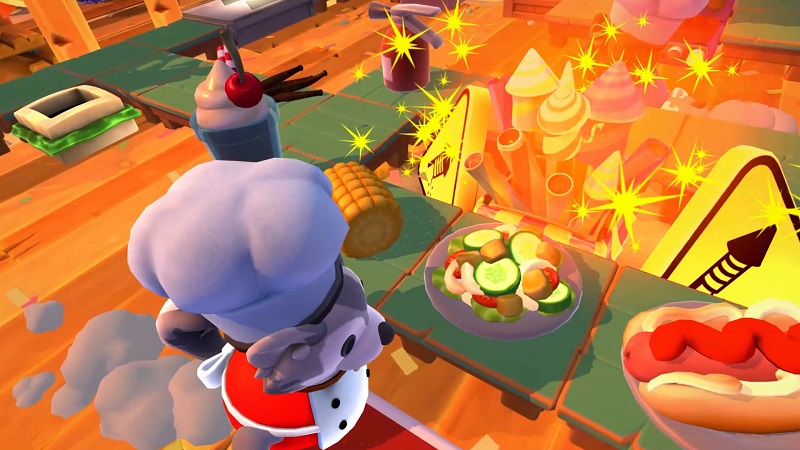 Overcooked! All You Can Eat PS5 Review

The Most Complete Version Of Overcooked! Makes A Stupendous PS5 Debut

As if the title didn’t give it away already, Overcooked! All You Can Eat is an extra-large, face-stuffing edition of everyone’s favourite pressure cooker chef effort that includes both Overcooked! games AND all of the DLC and expansion content released to date for each. It is, in short, an absolute banquet of a game that reliably supplies hundreds upon hundreds of hours of entertainment for budding career chefs who don’t give a flying one about being nice to their friends and family.

And as its status as the lone party game of any merit on PlayStation 5, it’s technically the best one of those too, though it’s also fair to say that there’s nothing much here that couldn’t easily be done on PS4 or PS4 Pro. On that note, you can catch our original reviews of Overcooked! and Overcooked 2! at the hyperlinks if you missed them.

That said though, Overcooked! All You Can Eat on PS5 provides the sort of local (and now online!) multiplayer co-operative fun that you still can’t really get anywhere else. For anyone not yet swallowed wholesale by the irresistible charm of Overcooked! the premise, like all great things, is both at once gleefully simple to understand and yet at the same time, fist-stump chewingly hard to master.

As one of a number of different chefs that span everything from ghosts to cats, dogs, crocodiles and just about anything else you can think of in-between, the goal is simple – you must prepare the dishes that the customer wants to eat as quickly as possible. The more dishes you prepare the more score you get, which in turn is converted into a star rating that lets you proceed on through the game. The problem is however, doing so, especially in the later levels, is anything but simple.

Essentially a masterclass of micro-management and anger management, preparing the required meals in time requires vegetables to be chopped, meat to be seared, ingredients to be cooked and, of course, plates to be cleaned. As such, this requires the sort of micro-management that makes red-faced, screaming Gordon Ramsey level culinary tyrants from even the most meek and amiable members of your friends and family.

That’s just the tip of the iceberg though, as there are a wide range of hazards which must be accounted for and avoided such as burning pots of food which are left on the stove too long (and so require a good old bit of fire extinguisher action) and even just bumping into your fellow chef in the middle of busy kitchen. But wait! There’s even more to worry about beyond such seemingly mundane concerns.

Arguably one of the most compelling aspect of both Overcooked! games is the wide variety of distinctly over the top levels in which players will be expected to carry out their culinary duties.

Ranging from scorching volcanos, to iced islands in the middle of Antarctica to a pair of kitchens suspended atop two separately moving vehicles, every level presents a unique challenge that must be overcome in addition to the usual wealth of more everyday issues that are encountered in the earlier stages of both Overcooked! games. As such, the immense satisfaction that you get for completing an especially hard stage is something that cannot really be understated.

Perhaps the other important thing to mention about Overcooked! All You Can Eat is that the game is pretty much engineered to be played with friends – either locally or online. Should you be foolish enough to play by yourself, both Overcooked! and Overcooked 2! have you doing everything yourself and then simply tapping the L1 button to switch over to another chef in the kitchen to perform a different task while the first chef is busy doing chopping or whatever.

It’s hardly ideal to say the least and it also completely cuts out the superb ragey fun you get from when playing with friends and some dolt forgets to wash any dishes in time.

Beyond the massively stacked content offering that Overcooked! All You Can Eat brings to the table there are a number of smaller, more easily missed improvements that have been made here too. For starters, Overcooked! All You Can Eat supports cross-platform play and voice chat across all of its game content – allowing you to pit your cooking abilities against folks on other platforms; greatly widening the pool of potential players as a result.

Another more subtle improvement are the new accessibility options that have been bolted onto the experience. Now, players with reading and sight difficulties are catered for somewhat by the ability to increase the text size and change the font to a dyslexic friendly print. Sure, it’s not the quite on the level of the all-encompassing accessibility changes glimpsed in something like The Last of Us Part 2, but they are substantial enough that it will significantly aid those who need them.

For those interested in how Overcooked! All You Can Eat makes the most of PlayStation 5’s cutting edge hardware features however, you might find yourself a touch disappointed.

Though the game supports 4K resolution at 60 FPS (to be expected given the relatively simplistic visual nature of the game) and much faster loading times, another nice touch is how the DualSense implementation is handled – with the touch pad allowing you to quickly choose emotes at a quick swipe, while more subtle haptic feedback received from the pad clues you into parts of the kitchen which require attention. Another nice touch is how the speaker is used to decent effect too – sounding an alarm when a pot is boiling over, or when the time window on a customer’s order has closed.

As a party game then, Overcooked! All You Can Eat is arguably the definitive edition of Team 17’s magnificent team based cooking yarn. Delivering the most content crammed version of the popular series to date, Overcooked! All You Can Eat can be relied upon to provide many hours of cooking co-op mayhem amongst friends and family. It’s just a shame that beyond its admittedly gargantuan content offering, there isn’t a whole lot to recommend to fans of the series that already own both games.

A definitive take on some of the best co-operative games to ever grace PlayStation, whatever Overcooked! All You Can Eat might lack in terms of bespoke content and PlayStation 5 focused features, it more than makes up with a delectable banquet of face-stuffing goodness. Need a good party game for your PlayStation 5 to get you through the holidays? Look no further.

Overcooked! All You Can Eat