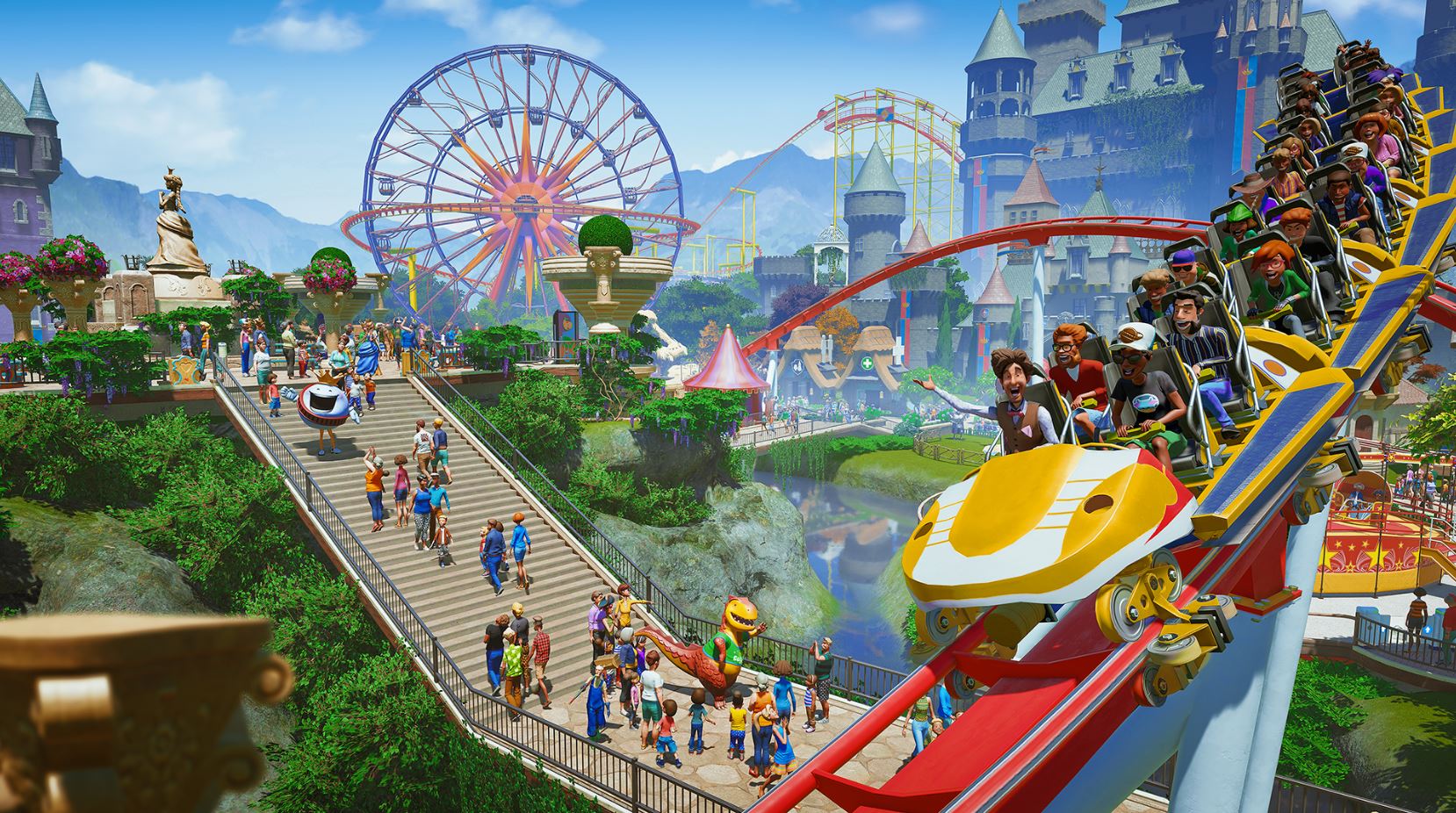 Planet Coaster: Console Edition PS4 Review – One of the more pleasant things to happen in gaming over the past decade is the resurgence of the management sim on consoles. From the handling of entire populations in Cities: Skylines to micromanaging individuals in The Sims 4, a welcome return to the nostalgic quality of playing both governor and God in classics such as Sim City, and Theme Park.

Planet Coaster: Console Edition evokes the spirit of Theme Park in particular. A modern take on the adventure park sim with the whimsical charm of the Bullfrog classic, but with far more depth. As with any PC-centric title, the big question is not so much if it’s a good game, but if it makes the transition to console smoothly.

An Introduction To The Park-Running Life

Before we get to that, onto the game itself. In this brightly-colored world, full of cheerful tunes and whimsical characters, you are here to manage and create exciting theme parks that rake in the cash. A simple task on paper, but any time spent in reality will let you know that the general public can be…difficult, and there’s a lot of juggling to be done just to please some of the people most of the time. They want exciting rides, but nothing too exciting. They want value for money, but being seen as cheap devalues your park. They want more toilets, but there are perfectly good bushes, you know, the usual stuff.

The tutorial stages explain the nuances of these situations and help you see how to build an efficient, money-making park. There’s a lot to take in, so the well-explained step-by-step walkthrough Planet Coaster gives you is most welcome. It’s delivered with a nice side of frothy, family-friendly banter between your team of advisers. There may be trouble along the way, but Planet Coaster is a pretty chilled out management sim most of the time. One you can take at your own pace in order to properly master it.

You can tinker with everything around your park, from money to scenery, and beyond. The age-old dilemma of balancing profit and customer happiness is tricky but rewarding. By hiring the correct staff, arranging the right scenery for the park, pricing your food and drink carefully, and making rides that work for everyone, you have a good chance of turning a profit and building your park’s reputation and prestige. The ultimate aim is to be a popular, lucrative, and award-winning theme park.

Getting there takes time and work, but it’s relatively easy to see where you might be going wrong thanks to extensive menus and sub-menus for pretty much every aspect of the park and its facilities. That can also be a touch overwhelming, as there really are a lot of menus and sub-menus to wade through, and even with the tutorial, it’s not necessarily easy to remember everything.

Making The Jump To Consoles

There’s clearly been an effort to translate the PC experience into one viable for a controller, but finding a compromise between being informative and keeping the screen somewhat clear of clutter is a difficult task. Most of Planet Coaster’s issues come from things that don’t quite translate to the DualShock 4. The worst offender, unfortunately, comes in one of the best parts of Planet Coaster. The rollercoaster creation system.

This is where I spent most of my time, and I wish it was just because it’s so engrossing. I mean, it really is great fun to design every twist and turn of your very own coaster, factoring in the levels of fear, excitement, and nausea caused along the way. It gives you a great appreciation for the art of creating the perfect thrill ride, and there’s no one way to get those results, which is a big part of why I kept coming back to it.

It helps that you can do this in a testing environment, where costs aren’t incurred and you can experiment to your heart’s content. It even has its own step-by-step tutorial that encourages experimentation in a wide variety of coaster types. Whereas so many of the parks you make can feel like slotting templates together, having your very own unique rollercoaster as the prize attraction puts a stamp of individuality on your park.

The drawback is that fine-tuning rollercoasters really doesn’t suit the DualShock 4. Tweaking individual parts ends up being needlessly fiddly and frustrating, especially when trying to apply the right kind of angle to ensure your guests don’t upchuck en masse. Yes, I got used to it to some degree, and because I was into the act of building rollercoasters so much, it certainly softened the impact, but it continued to irk me throughout my time with the game.

Thankfully, these are relatively minor annoyances due to the initial structure of the game, where you can do focused missions at a variety of preset theme parks, earning stars for completing objectives, all while learning the finer details of the game’s systems. I highly recommend going through these as much as possible before diving into the creation of your very own park, because it truly helps to give you freedom in creating that dream park whilst averting regular disaster.

Solid Right Now, But The Opportunity To Grow

There are arguably management sims that handle better on consoles than Planet Coaster does, but they have had time to get to that stage, so it’s just as likely Planet Coaster can tweak and fix its problems over time. As they are, they don’t entirely get in the way of what is a very good successor to the likes of Theme Park and Rollercoaster Tycoon.

Planet Coaster rides the line between warm and friendly accessibility and in-depth theme park management surprisingly well, even if it does occasionally wobble nervously with the switch to console controls. It’s a largely serene experience with an utterly engrossing roller coaster creation tool that just makes the overall package that much better.