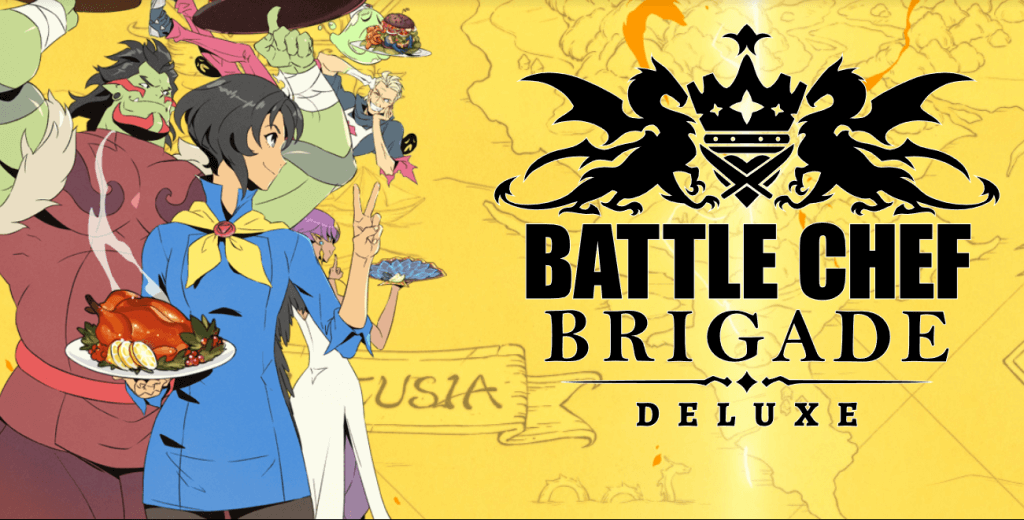 After playing so many games for so many years, one begins to grow tired of the same old thing represented in all the newness each release brings. Every once in a while, a fresh new idea lands that garners a great deal of attention. It may not be immensely powerful, and it may not be all that different when broken down to its fundamentals. It is the combination of things that refreshes the concept, and that very happening comes under the banner of Battle Chef Brigade Deluxe, brainchild of Adult Swim Games. As with games before it, repetition rears its head rather quickly, but these battle chefs have something a lot of games do not have: unadulterated heart. The battle chef world is palpable in every right. The streets are hand-painted in loose but gorgeous style that mimics the greats in modern media while still embodying its own vision. Orcs and elves and dwarves make up this world along with humans. Together, they all combat a massive surge of monsters across the world through competitive cooking.

When put into words, the concept sounds rather silly. Subtlety is Battle Chef Brigade’s safeguard throughout, however. All of the creatures and characteristics portrayed all come in a showing way rather than telling. Whether through subtle lines of speech or how scenes are depicted, there is a verisimilitude here, a true believability, that even historical media often lacks.

Competitive cooking from farm to table

As you would expect from a game called Battle Chef Brigade, elements of book cooking and combat must appear at some point. In fact, both of these are major parts of the game itself. In a nutshell, Mina seeks out a competitor to challenge, hunts for ingredients, and creates a dish for judging. Cooking itself is simple in that you place ingredients into a pan and mix them into linear combinations of common elements to generate cooking points. These points are what rate your dish against your opponent.

Hunting is so very fluid as well with an intriguing side-scrolling combat style that is gorgeous to look at and seamless to play. There is no break in the action between hunting and cooking, and having that accessibility makes the experience completely engaging. Battle Chef Brigade is not a nutshell-type game, however. You must hunt down your own ingredients, bring them back, compile what elements the judge wants, and complete the cook in under a very stringent time limit. Normal and hard versions of the game are available for some variety. Even on normal, though, the time limit seems to rear its head quite early. There is some wiggle room in the beginning, but efficiency and experience become crucial to success as the game progresses.

Depicted above, you find yourself having to create multiple dishes with multiple people in mind. Three primary elements compile all food in some form or another. Those three elements are earth, fire, and water. Almost never does a set of judges request common elements either. Your success rides on your ability to keep these in mind as you hunt and cook. This constant engagement is what makes Battle Chef Brigade so engrossing, really. The game is simple in concept but challenging with its variables. No convenient screen prompts exist for what each judge wants. You can run over to them to see their desired element, but that ticks the clock down. Time management is key among all the other critical factors, and each victory feels oh so very rewarding. Much like so many games before it, Battle Chef Brigade falls into its own repetitive rut of waking up, finding a competitor, hunting, and cooking. Mini-games add a sprinkled in every in-game day to help break things up. These also act as important training, exposing you to different scenarios and making you think outside the box. Even with these mini-games, the grind is real. In a world so saturated with energy and personality, having to slog through the rinse-repeat takes its toll eventually. I would be lying if I said that the narrative and world themselves could not push you through. I would also be lying, however, if I said that the charm of Battle Chef Brigade did not come at a cost.

I opened this piece with a line of dialogue about fresh new ideas. I will forever stand by that prose when talking about Battle Chef Brigade, even through its repetitive nature. For a fresh idea, Battle Chef Brigade conjures up a delightful dish of potent, subtle world-building with simplistic, intriguing gameplay. Repetition is the primary cause for game fatigue here, however. There is no avoiding it. Equally so, there is no avoiding the heart and soul of Battle Chef Brigade either. I do not see this game as one that is either liked or not. In my humble opinion, there is enough here to garner any level of curiosity. You will be taken by it.

An engaging experience that can get a little repetitive, Battle Chef Brigade Deluxe looks gorgeous and has enough heart to warrant you tucking in to discover its unique flavor.