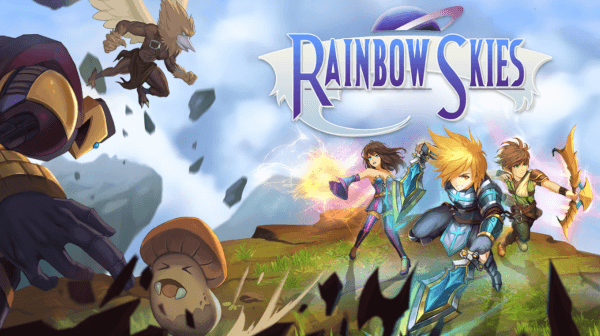 It may come as a surprise to many that the PlayStation Vita is still getting developer love in 2018. Even better still is the possibility that Sony’s basically-retired handheld has something to offer besides new 8-bit, twin-stick shooters.

Dedicated Vita developer eastasiasoft, developers of Rainbow Moon, has released another title for the Vita as well as PS3 and PS4. Rainbow Skies offers a fair few niche features: 100+ hours of gameplay, Cross-Buy and Cross-Save, and an old-school RPG style.

If these features interest you like they did me, then be sure to read to the end. Rainbow Skies still may not be what you’re looking for in an RPG. The game opens up with Damion, a headstrong and dense trope, setting to take on his final tests to become a monster tamer. As he bumbles his way through the test, his situation begins to unravel as he and his companion, Layne, find themselves soon falling from their sky-city home, Arca. There, they meet young magician, Ashly, and in a stroke of negligence, Ashly casts a spell on Damion, unintentionally making him bound to her. It is here where they depart together in hopes to find a way to dispel the magical bond between them.

Narratively, as can be seen from the above synopsis, Rainbow Skies offers very little of substance. Most of it is tongue-in-cheek that falls flat or feels just silly. There will be moments where they start to feel approachable as characters, but it’s not nearly enough to overcome their obtuse, dejecting mannerisms. This holds true even as the standard world-saving portion of the game comes into view. It reminded me a bit of how Don Quixote read, where some of the characters he encountered either enabled him ridiculously or just made fun of him to no effect. Combat is more engaging than the narrative, even though combat lacks that sense of development that comes with standard RPGs. New abilities and spells are learned along the way, but what makes most abilities frustrating is the unspoken terms to use them. Some, for instance, require very specific squares on the battle map to be occupied by an enemy. If one of those specific squares is empty, then that ability cannot be used.

With that in mind,, I tended to simply favor the abilities each character started out with. They grew in strength and proved much more versatile the more I used them. It is cool being able to earn skill points and applying them to your character how you see fit. More often than not, though, finding skill books always sparks that want to try the new skills out. As previously stated, that spark usually fizzles out rather quickly.

Fighting can be cool, though. Having the basic grid formula broken down to simple inputs makes the entire concept approachable by everyone. It soon proves novel and repetitive without the sense of development or customization. Oftentimes, I sat my characters in a corner and just let the enemies line up to be killed so I didn’t take as much damage.

There are different difficulties in Rainbow Skies. However, with how difficult enemies are when a mere level or two higher than you, these difficulties garner more leveling than normal.

Rainbow Skies Has Some Extra Features

Rainbow Skies does have a few features that increase its shelf life. As mentioned at the beginning of this review, this game can be played on all three PlayStation consoles. In fact, all three versions are available to you when you purchase it, so you can take it with you when you’re out and about by uploading it to the in-game servers. For me, Rainbow Skies just felt better on handheld. I was able to take it with me rather than have my complete focus on it.

Another handy feature is having the ability to skip complete conversations. If the narrative isn’t doing it for you but you’re still into the combat, this is the way for you. In fact, the game charts its quests with pristine detail. I’s all broken down nicely, so you see exactly what you need to do next. Rainbow Skies doesn’t ask for anything complicated, which is another reason why playing on Vita is a more attractive notion.

All in all, Rainbow Skies has some charm that fizzles out quite often. Combat is simple and approachable and has a universality to it. Regardless, it lacks the kind of progressive depth to spend too much time developing your characters past what they learn on their own. There’s a lot of game here, time-wise. However, deja vu is likely, as you’ll see a lot of the same for a lot of the game. If you’re itching for an easy grind RPG, this is truly it. If there’s something even remotely unattractive about it, I promise that this isn’t your scene.

Rainbow Skies has a few good ideas, but those aren't enough to move past its bland narrative and repetitive gameplay.