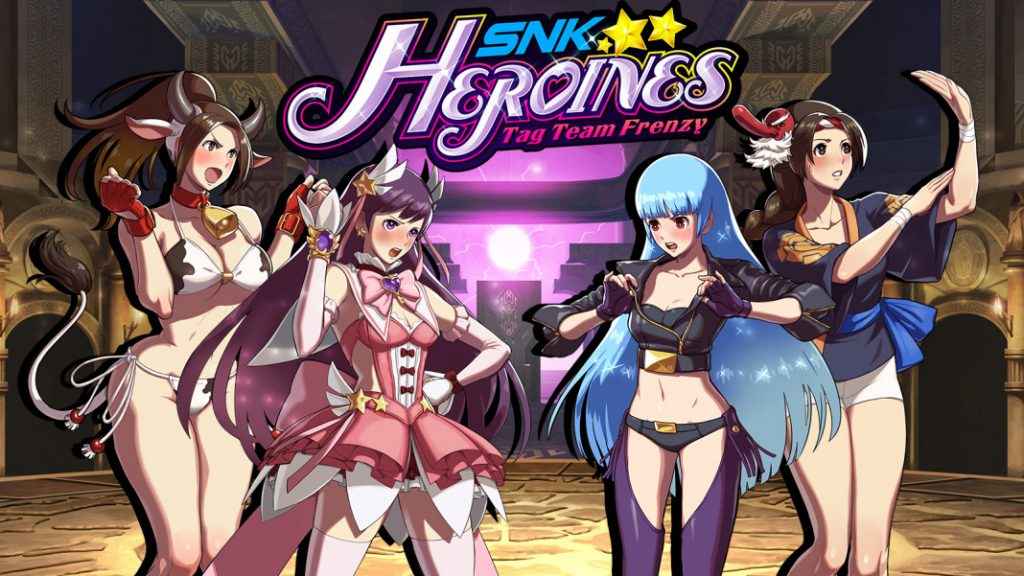 SNK Heroines: Tag Team Frenzy is the newest fighter from SNK and published by NIS America.

In another call to the ever-present Who would win? question posed by fans throughout the world, SNK answered a question that no one asked: Who would win if we put all the King of Fighters girls in skimpy outfits and made them battle for a pervert’s entertainment?

That answer is SNK Heroines: Tag Team Frenzy, and at a time when other developers are shying away from scantily clad women being used as a gimmick to sell games, SNK steps up to the plate to fill the void.

Each strike and special move comes with a unique and girly particle effect that practically showers the stage with every clash. All of your favorite supermoves are intact and as gorgeous looking as ever. Environments are detailed, though few.

And, of course, there’s the babes.

Prior 3D outings from SNK for the King of Fighters series typically have not been received so well. I’m at least happy to say the 3D looks beautiful this time, as well as the UI elements and all the finer details.

Music is fun and jiggly like any good J-Pop soundtrack, and the voice acting is top notch. There’s even a feature to change the menu voice to any of the girls’ once unlocked.

What I am now sad to say, is that is where the best of it ends. The rest of the game feels exactly like what we were all afraid it would be.

SNK Heroines: Tag Team Frenzy as a fighter is just too weak to hold its own in a market flooded with other tournament quality combat systems.

I’d have to wager a guess that this was intentional. The combat system is so simple a teenage boy could play it with one hand, whom I’m guessing is also the core market for this game.

The action is not a fast paced as an ArcSys game, but holds true as an SNK game with all the standard attention to detail and quality animation we’ve come to expect from them over the years. It just doesn’t feel right because the combat system is closer to Smash Bros. or PlayStation All-Stars than any King of Fighters games.

The ultimate goal in each match is to damage your opponent until their health bar is red, then tap R1 to use your finishing move and win the match. It is a tag system, so you will pick an attacker and defender to swap between. The defender is trapped in sand (more on this later) and you can switch to them anytime you are safe and on the ground by pressing R2.

There are also times when this can be worked into combos to continue a nasty wave of punishment once you get better.

The defender also can use items you pick up by having your attacker hit floating yellow orbs, which contain random items with different effects. Properly timing the use of these items can turn a hard-fought battle in your favor, so they are handy to use often.

Square is a standard attack, triangle is strong and all special moves are done with the circle button and a directional press. It makes all sorts of moves and combos possible, but is also severely limiting. There’s no challenge for fighting game fans. No timing and art to mastery (it’s there a little, but just enough to make the combat solid).

It’s not bad, it’s just not good. The system is solid and works well for what it is, and is easy to master more complicated combos including the tag combos.

There is a story mode in the game, as well as the usual array of online battle modes, 2v2, survival, and a versus mode for quick matches and couch play.

The story mode is worth playing through if you are interested in collecting all of the art, costumes, accessories, and extras available with the currency you’ll collect. There are special pieces of artwork you can earn by beating the game with two specific characters, a total of 7 featuring two each of the fourteen characters.

I was able to afford most of the items by the time I had done 7 playthroughs of the story, and just a little more time in survival mode allowed me to earn the rest. The story mode itself is another level of creep factor all together.

The girls wake up and find themselves trapped in a pocket dimension. They are greeted over the speaker system and told to fight for this pervert’s amusement.

After a few battles, you discover that the losers are being trapped in sand and their fear and suffering is being used to power a big evil…somethingerother, and you have to stop it.

And that’s it, no in depth story, just a pervert taking creep shots of cute girls beating the crap out of each other. This guy is flamboyant, weird, and just plain uncomfortable to watch. After the first playthrough I skipped the rest of the cutscenes.

Even the other modes offered no extra entertainment, the fighting system is so small and so airtight that it’s boring. The only people who would play this are people who wanted a fighting game that took them back to the old days of pervy fighters, where the art of pausing at just the right time is appreciated by only a select few that know what I’m talking about.

I mean, at least if you’re going to play a game for the boobs, get good at Mortal Kombat. At least then you’ll be keeping your hands busy with getting better at a quality fighting game.

But you won’t listen. You will pick this up, because there’s an odd curiosity and fascination you haven’t felt in years.

If YOU play this game, and you LOVE it, you may need to leave the basement and go for a walk.

Though pretty to look at, and maybe fun to play for a bit with some friends, the combat system here just isn't meaty enough for any long-term or tournament worthy enjoyment. Really only just for people that still don't have an internet connection, or are just really into this sort of thing.