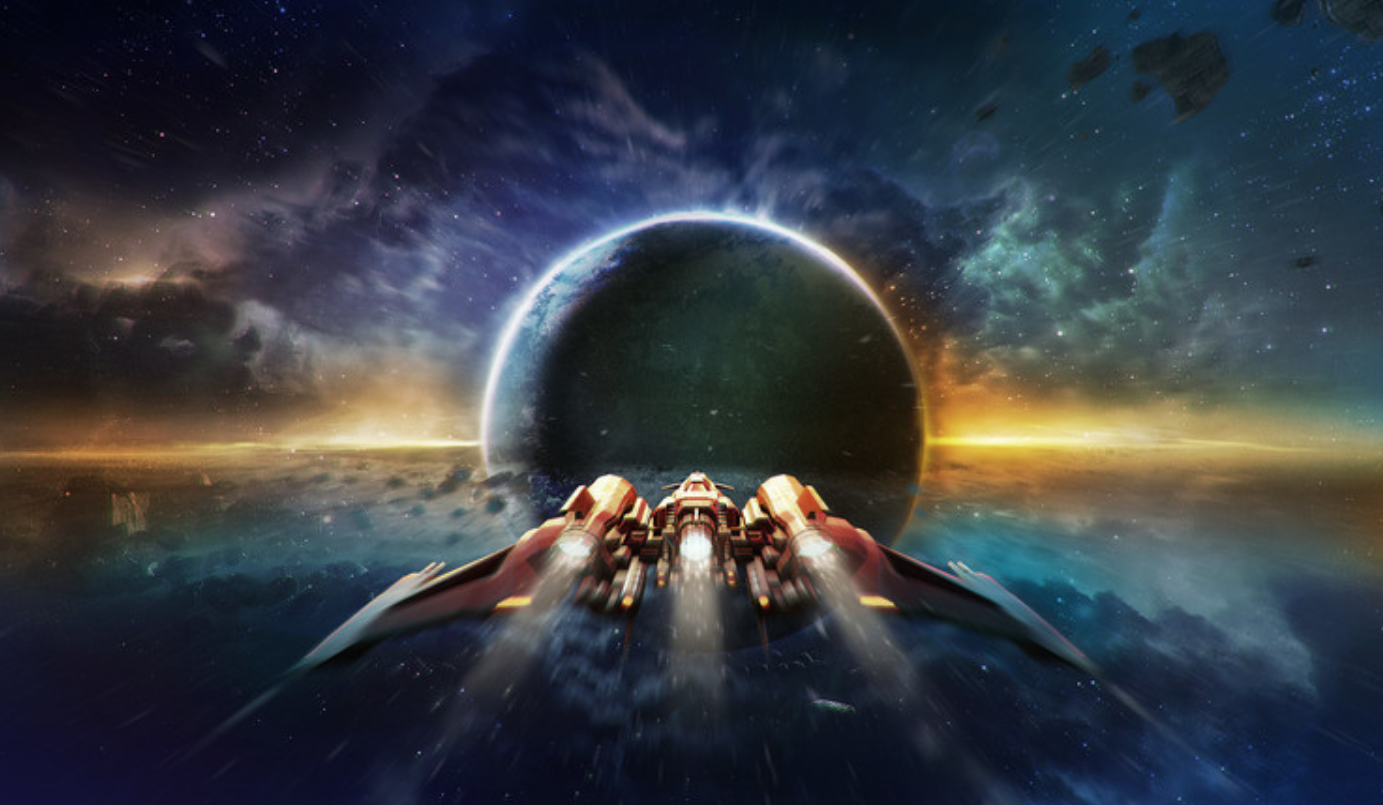 But do games designed for an elitist touchscreen device no bigger than a flatpack colostomy bag translate successfully onto a big screen and a controller in the hands of an overweight sofa drone? Read on and see, slothful sofa drones…

In Space, No-one Can Hear You Yawn

The critically acclaimed if unoriginal anti-grav racer Redout first appeared in 2017, wowing gamers with a blisteringly fast true next-gen update of WipEout, throwing in a few new ideas but essentially keeping to the winning formula of twisty futuristic racing and weapons to impede your competitors. Rather than repeat themselves with a direct sequel, Italian developers 34BigThings have decided to leave the safety of the trenches and go into space. Actually there’s very little resemblance between the two games, so somewhere along the line, someone decided that trading on the name of their successful futuristic racer would help sales. 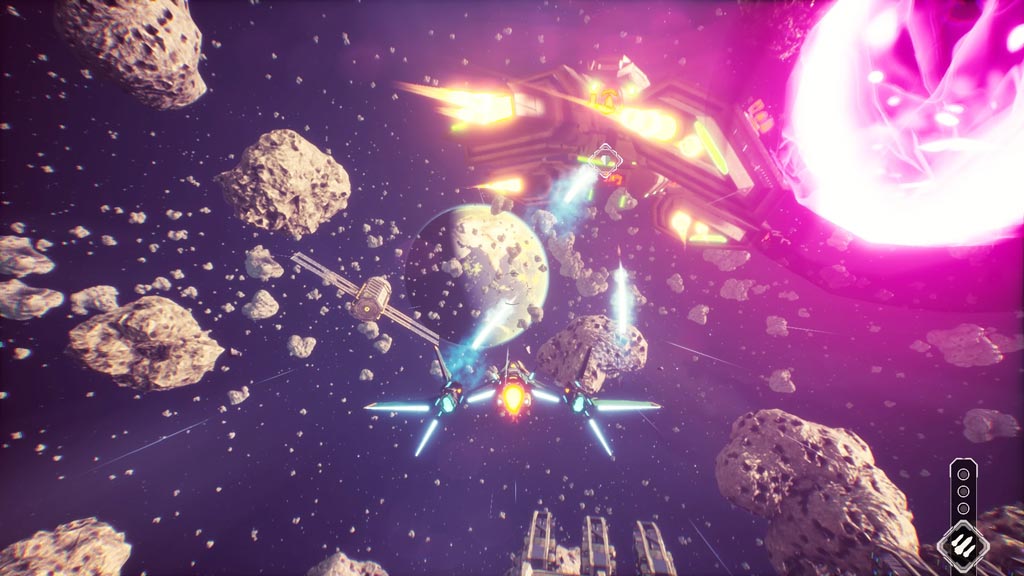 So what we have here is a fairly simplistic on-rails space combat and reconnaissance game, with some no-frills storyline dialogue sandwiching each mission. The storyline is generic and forgettable but at least it attempts to add an element of depth and narrative to the space action, which you’ll soon realise is rather uninvolved and shallow, like a mobile phone game. Oh hang on…

Choosing the solitary option of the one-player campaign enables you to choose from a few different skins for your spacecraft and see the options for upgrading your craft once the credits start to accumulate during the missions. Out in space, you’ll be presently surprised by the crispness of detail and wide angle vastness of space on display, begging to be explored like Elite: Dangerous or No Man’s Sky.

No such luck in this regard unfortunately, as the majority of missions involve moving your ship within the confines of the screen with the left stick as you are guided towards the next target or reconnaissance destination on rails. The top shoulder buttons spin you mechanically left or right to evade any approaching missiles and L2 and R2 fire your weapons, with your missiles locking onto more enemies as you hold down the trigger. 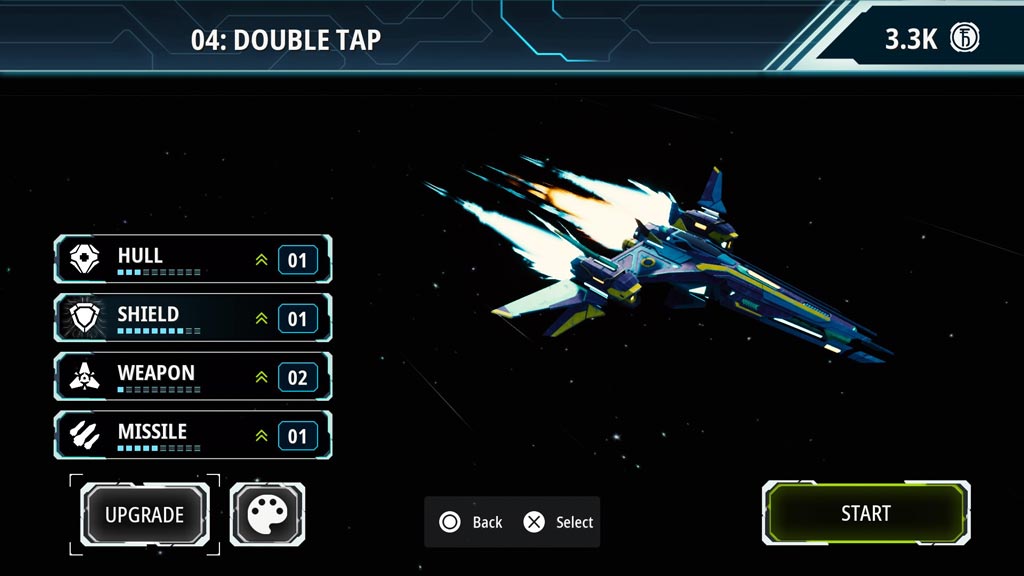 Credits Where Credits Are Due

The missions ease you in with some simple blasting of enemy craft following set patterns, with credits collectable after each set has been dispatched. More tricky enemy craft appear as you progress, and they not only don’t just sit in front of you waiting to be shot, but they also have the gall to fire homing missiles which require the ‘evade’ acrobatics from your ship.

Additional credits can be harvested from gold gem clusters on nearby asteroids and once you’ve mopped up the requisite mission targets, you are rewarded with cards which can allocate to bolster your ship’s performance. You can then return to the base screen to spend credits to buy upgrades for your Hull, Shield, Missiles and Weapons. There’s no discernible difference after the upgrades, but one can assume it deducts less of the necessary hit points from your craft as it sustains damage in subsequent missions. 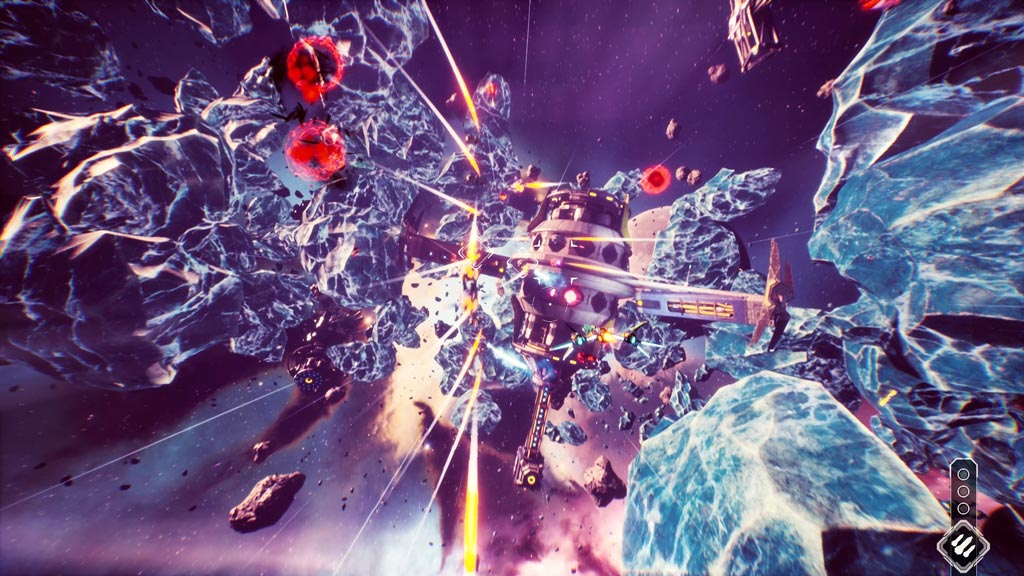 Wherever I Lay My Phone (That’s My Home)

Occasionally you are released from the rails and allowed to explore the mission area, usually for surveillance or to collect certain blueprints and eventually for the ‘boss’ fights. After reluctantly acclimatising to the restrictions of the on-rails missions, the freedom should be a welcome release, but unfortunately the basic controls just aren’t up to the job of making these missions satisfying or remotely playable.

The Boss fights are particularly dire affairs; dodging a relentless technicolour storm of enemy fire whilst trying to manoeuvre your lumpen ship is a truly thankless task. Fortunately your repeated deaths whip you back to the start of the firefight, but going up in a puff of smoke repeatedly due to the poor control system will seriously test your patience.

The combat itself never manages to feel remotely satisfying and there’s something lightweight about the weapons and general physics which ensures that even when the game crams the screen with targets and oncoming bullets, it still manages to feel hollow. The weapons hardly seem worth upgrading even when you’re swimming with credits as they never feel appreciably powerful during the messy combat.

Harking back to the glory days of Redout, there are some racing sections to alleviate the boredom of the shooting and locating missions, but even these fail to excite and they merely pass the time, much like the whole experience. 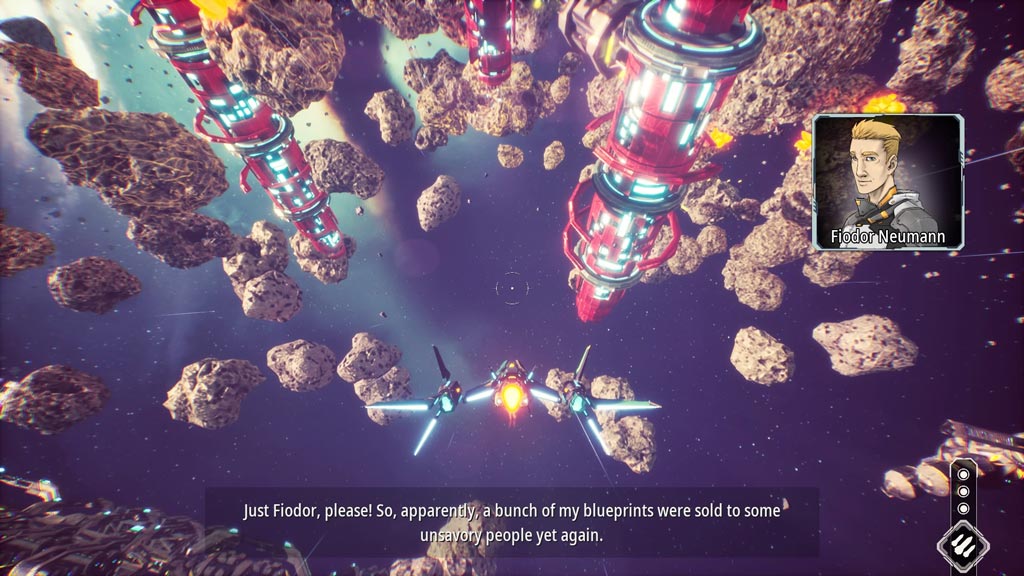 Perhaps it’s down to the basic gameplay which may well work on a mobile phone but it is totally uninspiring on console despite the tarted-up sound and visuals. Flying through space shooting enemies should inspire excitement and wonder and many games have managed to capture the childlike inspiration taken from so many great sci-film films and turn it into a brilliant gameplay experience.

Unfortunately Redout: Space Assault never once immersed me in the characters or missions, nor motivated me to see how the story progressed or what graphical treats there might be around the corner. It almost felt to me like the apathy instilled by the game had seeped down from the developers who had somehow managed to finish the game despite the feeling that what they were working on was just plain substandard and boring.

For an alternative budget space combat game, try Subdivision Infinity DX instead which features less dated game mechanics, and a more substantial sense of power behind the weapons. Hopefully next time the Redout ships can return to floating just above the planet surface in a colourful trench instead of being forced onto a pair of rails dating back to the arcades of the 90s.

Even at a budget price point, I can’t recommend this dated and simplistic space shooter. Life is just too short for unrewarding leisure experiences, and when the PlayStation catalogue is bursting at the seams with great arcade combat games, this flimsy attempt can be given a wide berth.

Don't be fooled by the impressive visuals. This dated and deeply unsatisfying arcade shooter manages to make space combat feel flimsy, boring and anything but immersive. Perhaps on a mobile phone, its limitations can be overlooked but on a console it's not worth bothering with.