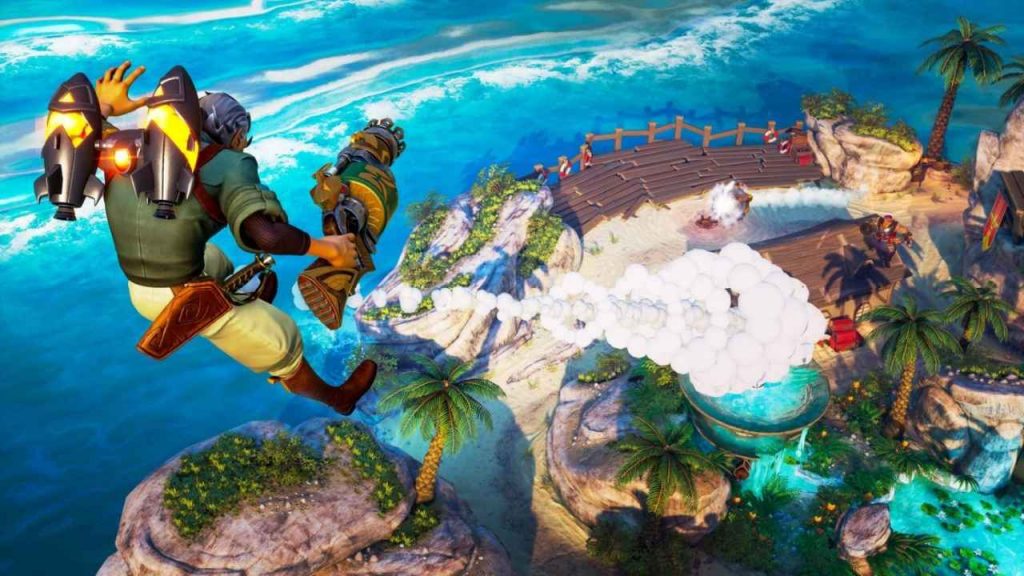 Rocket Arena PS4 Review – There is something to be said for a game that keeps things simple, and just wants to provide players with some good, old-fashioned fun. Rocket Arena, newly released on PS4, Xbox One, and PC, is just such a game. There is nothing overly complicated taking place here, but the trade-off is that players of any skill level can pick Rocket Arena up and have some modicum of success.

I remember when Overwatch first launched. During the opening days when the game was fresh to the entire player base, everyone was stumbling around – learning the maps, the modes, and the powers of the different characters. At first glance, I thought that Rocket Arena would be much the same. Nope. An hour or so with this one and you’ll have it all pretty much down. That doesn’t make Rocket Arena bad; it makes it accessible. Sometimes that is a strength.

Rocket Arena – Dive Right In, The Water Is Fine

The premise behind Rocket Arena is charmingly simple. Players are randomly grouped up (though you can create teams to play with friends) in teams of three and pitted against each other on small maps for a variety of 3v3 games. Most of these games involve liberally shooting at your opponents, in an attempt to send them rocketing into the sky and off the map.

No one ever dies in Rocket Arena. Each player has a visible damage meter, and taking shots fills that meter until it is full and pulsing. If your meter is full, you had better run and hide, because one more shot will send you shooting off the map like a rocket (Rocket Arena, get it?). After being launched skyward, players cruise around for a moment, before the game brings them back down to a random point in the arena to reenter the battle. The game is remarkably good at putting players down in an area that is quiet, allowing them a moment to collect themselves while they make their way back into the fray.

There’s not much practical difference between being killed and respawning in other games or being shot up into the sky in Rocket Arena, but being launched into the atmosphere feels nicer somehow. Plus, you can still see the action from up above – keeping tabs on enemy players and planning your route back to the heat of battle while floating back down.

In keeping with the game’s overall friendly aesthetic, the lack of lethality makes this a good choice for younger players. But don’t think that Rocket Arena is a pushover. You are still playing against other players, and the range of skill levels you are going up against is just as sharp as it is in more mature shooters.

Nonetheless, Rocket Arena feels very “pick up and play”, with the central run, shoot, and jump mechanics feeling quickly accessible to new players. A quick tutorial level communicates everything players need to know, and then its off to the races (or the Rocket Arena, as the case may be). It is also worth noting that Rocket Arena launched with full cross-play between systems. No muss, no fuss, just turn it on in the settings. Again, easy, friendly, and accessible.

A Few Modes And A Decent Stable Of Characters

Right now, there are only three modes to play. In Ranked Play (the first real season opens on July 28 – ranked matches are currently in a “pre-season”), Rocket Arena selects which mode you are dumped into behind the scenes. But if you are in casual play, you can select which mode you want to mess with.

Knockout, a simple team deathmatch mode, is nothing to write home about, with players racking up eliminations while a timer counts down. Highest score (or first team to twenty) wins. This mode feels very familiar, but still allows for some thrills, depending on how you decide to play the maps. Some maps offer a bit of verticality, and many contain small tunnels and blind spots. Careful players with sniper-type characters can score some eliminations from these areas, but for the most part the big bomber characters tend to carry the day.

Rocket Ball has teams vying for a single ball, carrying it to the opponent’s nearby goal. You can either carry the ball directly into the goal or throw it with the triangle button, allowing for some Hail Mary moments. One time, I fired the ball into the goal while I was being propelled out of the arena, scoring and being eliminated simultaneously. Rocket Ball doesn’t allow for a lot of depth, but it is a fairly amusing past time.

My favorite mode, MegaRocket, is a simple point capture point. Rockets fall from the sky to semi-random points on the map, and players race to the impact point to secure it before the other team. This mode often descends into all-out brawls, with players sending each other shooting in all directions while attempting to stay on the capture point. As someone less skilled in third-person shooters, I find that I can do the most good to my team in this mode, savagely refusing to leave the capture point and firing off specials at anyone daring to get close.

A stripped-down hero shooter, Rocket Arena allows players to choose from ten or so characters to take into battle. None of these is particularly complicated. Each has a primary weapon, a secondary power, and a special to unleash.

For example, my favorite character Amphora has a somewhat slow primary weapon, but you can hold down the trigger to power up your shots. Her secondary has her throwing out three sticky, bouncy globs of goo, which pinball about the environment seeking out enemies to damage. Amphora’s special converts her into a ray-like creature that can slide about the map. Triggering the special a second time unleashes a geyser of water that will sweep enemies up into the air, doing heavy damage.

The characters are nicely designed, and each feels somewhat unique while still being easy to (you guessed it!) pick up and play. Some of the specials are pretty cool, and unlike things I’ve seen in other games.

One character can create a clone of herself, which runs around the map independently as a decoy. Clicking the button again can shift the player into the body of the clone, which can be handy in tight spots. Another character can throw out a teleport hotspot, then teleport back to it at any time, making him a powerhouse in Rocketball. Throw out the teleport near the opponent’s goal, and it’s an easy score if you can get the ball.

Is Rocket Arena A Living Game?

For the type of game that it is, Rocket Arena doesn’t feel very predatory. All level rewards are cosmetic – everything from costumes to the color smoke you leave behind when being ejected from the arena. There are only a few items available in the in-game store right now for real cash, and those follow similar patterns. As of launch, there is pretty much no reason to spend any money in the game, as almost everything can be purchased with the generously distributed in-game currency.

EA has committed to adding more characters, modes, and maps over time, all free to the player base. While not available yet, a “Treasure Hunt” game mode is prominently featured in the game’s UI and on the website, so that one is coming soon for sure.

And as you might expect, a Battle Pass is coming with the first season. That one will cost players ten bucks, but for those really into the game, it doesn’t seem like a bad deal. Committed players will be able to win over 100 cosmetic rewards, including enough paid currency to cover the next battle pass. It’s always nice when companies let you cycle battle passes like that.

A Little Light, But A Lot Of Fun

I gathered my 19-year-old son and several of his friends for a few game sessions, and the screaming and yelling seemed to indicate that they were having a good time (despite needing to “carry” me). We played well into the night and by the end of our last session, these seasoned multi-player-only online gamers pronounced Rocket Arena to be “pretty cool”. There are definitely some worse ways to spend an afternoon, and my wife doesn’t seem to mind me playing Rocket Arena in front of our littler kids.

Yes, Rocket Arena feels a little light upon launch. There aren’t a lot of game modes, and after an hour or so, you will have seen everything. But the modes that are there are fun, the maps are nicely designed, and the character variety adds a lot of playability. It’ll be interesting to see how EA supports the game going forward, but so, Rocket Arena feels like it is on the right path.

Rocket Arena is now available on the PlayStation Store.

Rocket Arena is a stripped-down online multiplayer 3v3 shooter. While there are only a few game modes at launch, they are fun – and EA says there are more on the way. A nice variety of characters keeps the action fresh, and the friendly atmosphere keeps the proceedings fairly cheerful. A great starter shooter for younger kids, but skilled players will also enjoy Rocket Arena quite a bit.