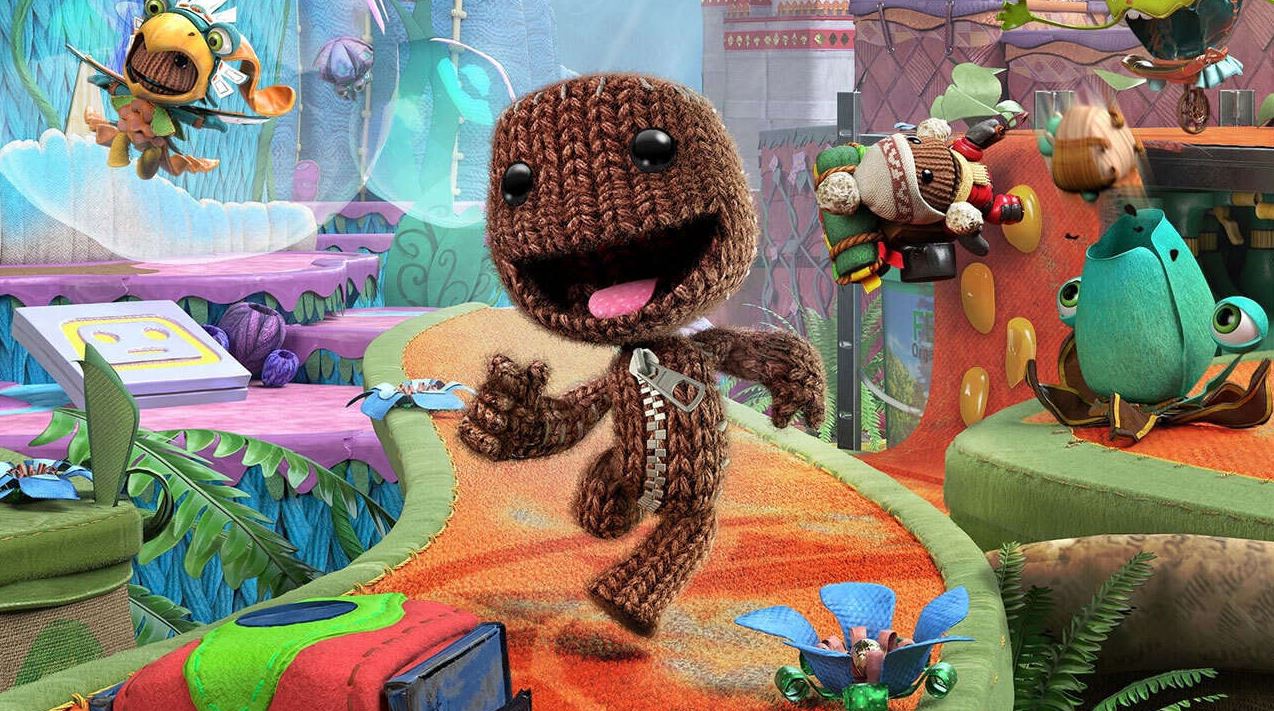 For the purposes of this review, we will focus on how Sackboy runs on PS4 from a technical perspective, including how it looks and runs. But, if you want our full thoughts on the game check out our PS5 review.

Much of The Same Greatness

The greatest strength to any stylized game is that the presentation never diminishes, no matter where it’s played. The same goes for Sackboy. You may not see all the extra little strands of yarn poking out from the protagonist’s noggin, but the charm and aesthetic are just as rich. The PS4 version also benefits from the game having a naturally zoomed out camera, so slightly reduced PS4 graphic fidelity is much easier to disguise.

The only discernible difference between the two versions comes from a textural realism. What I mean is that the PS5 version features each different fabric or material closer to reality, while the PS4 version opts for simpler details or a standard paper-like flat look for the material. The frame rate stays nice and stable on PS4, so it’s still quite easy to get immersed in the stylized wonder of Sackboy: A Big Adventure.

An Experience That Stands Alongside Its Bigger Brother

Standard DualShock 4 vibration lacks the kind of immersive tug that the DualSense offers up. Tugs on the rope generate little rumbles but nothing like the physical tension created on PS5. The intention and effect are still there, but the level of immersion just can’t be matched. In the PS4’s defence, comparing apples to oranges benefits no one, but it becomes a talking point when the apple and orange both play the same game.

The part about the PS4 version that surprised me the most was the loading times. Sure, it’s going to be longer than the PS5 version, but I still popped into games from the world map in no more than 15 seconds. I’m sure down the line that will seem like an eternity, thanks to the PS5, but 15 seconds is nothing to shake a stick at.

Co-op takes a bit longer to jump into as well. The PS5 version is snappy and immediate, but the PS4 version takes a couple of extra seconds to register a new player coming in and leaving.

Honestly, the longest hangup comes from having to jump out of the game quickly to log in as another user, but that’s still not much more than a couple of extra seconds for processing. Granted, this option is limited to couch co-op, for now, so we can’t comment on how well online coop works until it goes live later this year.

Worth A Buy, Even If You Are Stuck On The Last Generation

The level of effort put into both the PS4 and PS5 versions of Sackboy: A Big Adventure make this a must-buy no matter what platform you have! Heck, buying the PS4 version yields the free PS5 upgrade the moment you’re able to snag a next-gen console. PS4 Sackboy has a handful of limitations, but it’s future-proof at the same time at no additional cost. On all fronts, you can’t go wrong with Sackboy: A Big Adventure on PS4.

Sackboy: A Big Adventure is out now for PS4.

Sackboy: A Big Adventure is a blast to play, no matter where you play it. Its PS4 shortcomings only lie with graphic fidelity and loading times. Apart from that, Sackboy is back and better than ever on all fronts and generations.