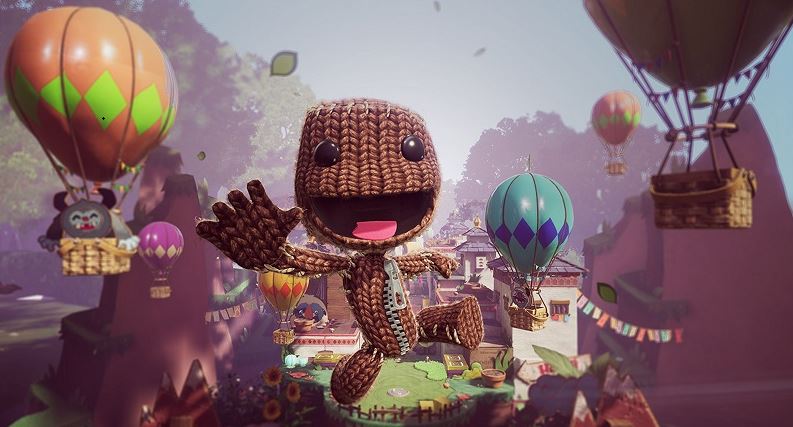 Sackboy: A Big Adventure PS5 Review. Even in the earliest days of MediaMolecule’s endlessly inventive LittleBigPlanet series, its Sackboy protagonist always seemed to be in some way larger and more charming than the various environments and user creations which would often surround him. Now at last given his own time to shine, Sackboy doesn’t just stand and deliver on a superb platforming adventure that is absolutely steeped in imagination and charm, but in Sackboy: A Big Adventure we also get one of the best titles in the entirety of the PlayStation 5 launch line-up, too.

One Of The Greatest Platformers To Ever Grace A PlayStation Console

Befitting its distinctly twee aesthetic, the premise for Sackboy: A Big Adventure is one that feels like it has leapt out of the pages of a children’s book. Tragedy is afoot! The villainous Vex (a despicable fiend of pure chaos and EVIL, no less) has abducted Sackboy’s closest and dearest, whisking them away so they can be forced to build his Topsy Turver device – a most heinous creation that will turn the whimsical and cute Craftworld into Milton Keynes! Wait, no. That’s not it. Anyway, Vex is bad, Sackboy is good and our Knitted Knight (their pun, not mine sadly) must rescue his best buds and family. Got it? Good.

A three-dimensional platforming affair, Sackboy: A Big Adventure is easily one of the best platforming games to ever grace a PlayStation console for a whole host of reasons. First off, actually controlling Sackboy is a dream – the little knitted fella is super responsive and thanks to the locked 60 frames per second visuals, makes negotiating pixel-perfect jumps an eminently doable and satisfying task indeed.

Dipping into the book of tricks employed by both contemporary platformers and those genre efforts from the days of yore, Sackboy: A Big Adventure effectively slices up its overall offering into separately themed areas that run the traditional gamut of platforming locations which one might expect – with ice, ocean and other similarly themed worlds all being present and accounted for.

Where Sackboy: A Big Adventure absolutely soars past its classical inspirations however, is in how it depicts these worlds – fully leveraging the massive raw power of the PlayStation 5 to do so. Envisaged a series of patchwork knitted hobbyist utopias, every aspect of Sackboy’s world looks fantastical, while at the same time appearing thoroughly grounded in ways I didn’t entirely expect.

Grass appears like a felt material, stapled to the side of an old chair whereas other incidental details, such as plants and small trees are manifested as cardboard strips and sections – each expertly colored, drawn and detailed. Every world has a beautiful sort of busyness to it too, as plants lazily bob up and down, confetti explodes from every side of the screen when you reach the end of a level and much more besides. Even Sackboy himself is absolutely bursting with detail from every digital seam, as rogue threads can be seen springing up every which way from his otherwise tidily knitted form.

As such, all of the worlds in Sackboy: A Big Adventure look so palpably textured and real that you can almost reach out and touch the threads which have been lain to fashion a patch of mud, or run your finger across the reflecting cello tape holding a paper mache plant pot together. Even the red bricks that you’ll come across in the environment look thoroughly real too – with each brick showing varying levels of wear and tear, dust and other bespoke details. Look, Sumo Sheffield are wizards that have fashioned a magical wonderland here and you won’t convince me otherwise.

All of this terrific visual world building is as much a testament to the considerable power housed within Sony’s PlayStation 5 console, as it is those creative and practiced hands at developer Sumo Sheffield whose imaginations have proven to be the catalyst for using all of that power in the most astounding and eye-opening of ways. There are plenty of sights and sounds that are encompassed within Sackboy: A Big Adventure’s lengthy runtime that I won’t go into here because they demand to be experienced completely fresh, but allow me to say that you’ll certainly be grinning from ear to ear by the time the credits have finished their final roll.

Both in terms of level design and the demands that it places upon the player, Sackboy: A Big Adventure emulates the greats of the genre with aplomb, starting off relatively simple before drip-feeding new concepts and ratcheting up the challenge to quite considerable heights. Every level is rife with secrets to discover and unique challenges, meaning there’s more than ample incentive to revisit past levels in a bid to improve your performance.

This is something that you’ll want to do too, as dotted around every stage are orbs which when collected count towards a total which is judged at the end of each stage. These totals are important because there are special trophy tiers that when reached, reward you with special bells that can be traded in for new outfits, while discovering special large orbs in each level count towards unlocking a gate where Sackboy can face off against a boss in order to reach the next area.

Further afield, additional orb and bell rewards can be obtained by completing the various Knitted Knight challenges where players must overcome an increasingly difficult series of obstacle courses against a hard and fast time limit. Much more akin to streamlined hardcore platforming challenges rather than the heady mix of charming spectacle and platforming prowess seen elsewhere in the bulk of the game, these Knitted Knight challenges can become unflinchingly difficult in the later stages and provide a stern test for even the most veteran of platforming savants to say the least.

All of this platforming goodness can not only be experienced with friend, but there are co-operative exclusive stages embedded into the story too and it’s these (currently local only) multiplayer focused challenges that often find Sackboy: A Big Adventure at its most innovative and enjoyable as you and up to four other players leap, laugh and fail your way to a darn good time.

In regards to other games that form the PlayStation 5 line-up, its probably fair to say that not all of them do a bang up job of making the most of Sony’s cutting edge new lump of PlayStation silicon and plastic. Sackboy: A Big Adventure however, bucks this trend and like the other aspects of its package that are steeped in innovation, employs a similar level of creativity here too.

I’ve already touched upon the artistic flair that oozes out of every digital pore in Sackboy: A Big Adventure but a whole heap of praise must also be deservedly showered upon the technical accomplishments wrought by developer Sumo Sheffield too. Absolutely belting along at 4K resolution and a rock solid 60 frames per second, every single scene, object and character in Sackboy: A Big Adventure looks incredibly vivid, eye-burstingly crisp and overflowing with detail.

Elsewhere, the DualSense wireless controller is used to satisfying effect. As Sackboy tugs cables rooted in the ground, the feeling of resistance is keenly felt in the adaptive triggers, somewhat reminiscent of the sensation that Astro’s Playroom provides in its implementation of that same functionality. Haptic feedback is appreciably palpable and nuanced too, with the DualSense wireless controller deftly replicating the shudder as Sackboy is fired out of pot-sized cannon or punches an enemy into the ether.

Finally, it should also be noted just how great the voice talent is too. With the likes of British thespians Dawn French and Richard E Grant taking up key roles each side of the hero and villain divide (honestly, as soon as you hear Vex speak it’ll be obvious), it underscores the fact that Sackboy: A Big Adventure feels every bit a British undertaking as LittleBigPlanet was before it, not least owing to Stephen Fry lending his dulcet tones to the narration of that aforementioned series.

Sackboy: A Big Adventure represents that rarest of feats. A tremendous platforming effort that is absolutely brimming with charm and imagination, Sackboy’s next-generation PlayStation debut also happens to be one of the best titles in an absolutely massive PlayStation 5 launch line-up. More than that though, Sackboy: A Big Adventure is the sort of game that has you quietly smiling from ear to ear and that’s a special kind of commodity that I’m sure all of us could do with right now.

Sackboy: A Big Adventure releases for PlayStation 4 and PlayStation 5 on November 12, 2020.

An astounding triumph of imagination, Sackboy: A Big Adventure isn't just one of the best platformers ever made, it's also a proper highlight of the PlayStation 5 launch line-up that is steeped in such fun and free wheeling creativity, that it deserves to be mentioned in the same breath as other PlayStation platforming heroes such as Jak & Daxter and Ratchet & Clank.