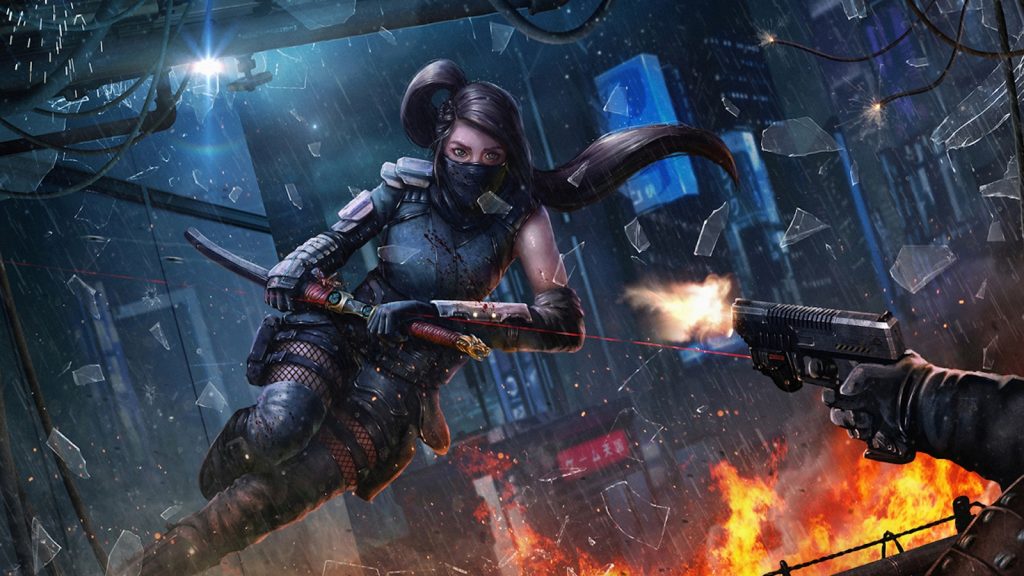 After running the tutorial in Sairento VR, I fired up the first campaign mission. Still a little unclear on how the controls would handle, I was hoping that the game would start a slowly so I could get the hang of things. It turns out that a bit of action was just what I needed.

I took a tentative step into the simulated cyber-enhanced streets of future Japan and looked around in wonder. Neon signs dotted the street in front of cheerful storefronts. A digital grid overhead indicated that yes, I was indeed in the Matrix. Across the street, two shrouded figures were walking on patrol. Assuming them to be enemies, I glanced about for a way to get the drop on them.

Spotting a streetlamp halfway between us, I took a leap into the air, arcing gently down to perch atop it. Neither enemy spotted me, but it was clear that the path of the guy on the left would take him right beneath me. As he approached, I readied myself for what I assumed would be an intense battle. Dropping from my vantage point, I pulled both of my katanas from their sheaths on my back.

Letting out a savage cry, I bore down on him with my blades crossed, cleanly severing his head from his shoulders in a spurt of crimson. Turning towards the second guy, I leapt across the way with one katana held out by my side. As I slid past him in slow motion, my katana sliced his legs from his body, torso flying up into the air and blood spraying in all directions.

Wheeling around to survey the damage I had done, I realized that I had just taken out two enemies in less than five seconds. “Oh,” I thought to myself. “I didn’t realize that this game was going to be AWESOME.”

Get Ready To Do Some Damage

Before you start playing Sairento VR, I have some advice. The first thing you want to do is clear the room. This is an extremely active game for a PSVR title, and you will certainly be flailing around. If you have small children, shoo them out of the room, as you will probably clobber them in your attempts to behead enemy ninjas. You also don’t want anyone listening to the stream of delighted profanity that is about to burst from your lips.

You may want to consider turning down the forgettable techno that pulses behind Sairento, and constructing a high-energy playlist to run in the background while you bounce around virtual Japan, taking out armies of enemies. I won’t bore you with mine, but Beastie Boys’ Shake Your Rump and Nine Inch Nails’ Wish are in heavy rotation.

Find a load-out that you are comfortable with. I ended up playing through the majority of the campaign with a katana in my primary hand and an over-powered pistol in my off-hand. This allowed me the flexibility to slide into a room and hack at baddies while simultaneously popping off headshots at distant enemies.

Finally, get comfortable with the idea that you are about to cackle like an insane person. Think of the best action sequences in John Wick, and how much they amaze and surprise viewers. Through a combo of tight controls and amazing bullet-time slow motion, Sairento VR allows you to pull off similar moves, putting you at the centre of your own over-the-top action film.

Sairento Pushes PSVR To Its Limits

It is a marvel that any human is able to play Sairento VR without spewing vomit all over the room, but somehow the devs at Mixed Realms have pulled off some voodoo magic that keeps things nice and comfortable. Through a combination of leaps, slides, and wall runs, players are able to dash across battlefields with minimal difficulty and almost no VR discomfort.

Battles are typically fought in sizable arena-type areas, with tons of verticality built in. Movement is controlled primarily with the left Move controller, with the player indicating where they want to go by holding down the Move button and pointing. Double jumps are enabled from the beginning of the game, and through the extensive skill trees, I quickly added a third.

Though there is a learning curve involved in playing Sairento, after some practice, movement becomes second nature. The two top face buttons on the Move controller handle turns, and a button is devoted to kicking in the bullet-time slow-motion effect.

Picture this: You enter a large room and leap straight up in the air over the head of an enemy. Sliding into slow motion, you whip around in mid-air in order to pop off headshots on bad guys that are perched in the rafters above you, before descending with your blade to cleave the original bad guy in half. Taking flight again, you wall run past two more enemies, shooting and slicing the whole way. A ninja materializes behind you, and you fire a shot over your shoulder, knocking her head clean off.

The room is cleared in seconds, proving that you are a badass. The PSVR pulls it all off somehow. The action never slows down, and the controller tracking is 100% on-point. None of the usual PSVR limitations seemed to be present. Sairento VR maximizes the PSVR like few games I’ve experienced. Like I said, this is voodoo magic.

But What Is Sairento VR About?

Sairento VR is about dashing into groups of enemies and gleefully hacking them into pieces, that’s what it’s about. Not good enough for you? Fine.

There is a story in Sairento VR, and while serviceable, it is nothing to write home about. It’s never 100% clear what’s going on. You’re in a simulation, and maybe other people are also in a simulation. The implications are vague. Somehow someone is hacking everyone’s stuff and changing what they see, turning people against each other. I don’t know. Some cyber-ninja stuff. Doesn’t matter.

What you really need to know is that Sairento is positively soaked in Japanese neon-sci-fi atmosphere. While the graphics can sometimes be decidedly low-res feeling, the subtle visual details still come shining through. This is a game where the look and feel matter far more than narrative.

Is Sairento VR Worth The Price?

Sairento VR is one of the most fully featured games I’ve played on PSVR. Running through the campaign is a great way to get familiar with the controls and the world, but it is really only the start of what is on offer. As you dig deeper into the somewhat murky menu system, you quickly discover that Sairento is a very fleshed-out game – which is kinda extraordinary in the VR space.

There are various missions and challenges that you can take on outside of the campaign (my favorite is the “run through the endless train and see how far you can get” challenge). There are also PVP and PVE online multiplayer levels that you can participate in.

Doing any activity earns you skill points to customize your character and an enormous number of perks and artifacts to enhance your loadout. Starting Sairento, I had no idea how customizable the experience would be, but once I figured everything out, my jaw dropped a little bit.

There are a wide variety of weapon types, each with their own customization options. Additionally, the player is equipped with a six-piece armor set, with multiple slots that allow for further enhancement. Do you want to be a stealth sniper, firing off ranged shots and finishing off bad guys with ninja stars? Fine. Or would you prefer to be an acrobatic death-monkey, bouncing off of walls and hurling shotgun slugs in every direction? Also fine. Or you could be like me and go with the default/Deadpool loadout. Perfectly viable and fun.

The only real grievance I can leverage against Sairento VR is that the menu system is a little clunky and seems strangely unresponsive. Everything else in this game is top-notch super-balls-out incredible.

Sairento VR is a burst of stylized, violent action straight to your cerebellum. If you are an action-junky, this game is screaming for you to buy it. Sairento VR rocks and rolls like an out-of-control carnival ride. No hyperbole, Sairento is a must-buy for PSVR owners. I would go so far as to say that non-PSVR owners now have another reason to buy a PSVR. If this isn’t the best game on Sony’s VR system, it’s damn close.

Sairento VR is available in the EU in both physical and digital formats. North America receives the physical version on August 13 for $39.99, through retailers including Amazon, GameStop and Best Buy.

Sairento VR is one of the best games on PSVR. With non-stop action and thrilling acrobatic controls. It delivers an adrenaline shot of pure action straight to the heart. There is simply nothing else like Sairento VR on PSVR or any system for that matter. This is a groundbreaking, standard-setting game that will serve as a waypoint for VR action games for years to come.