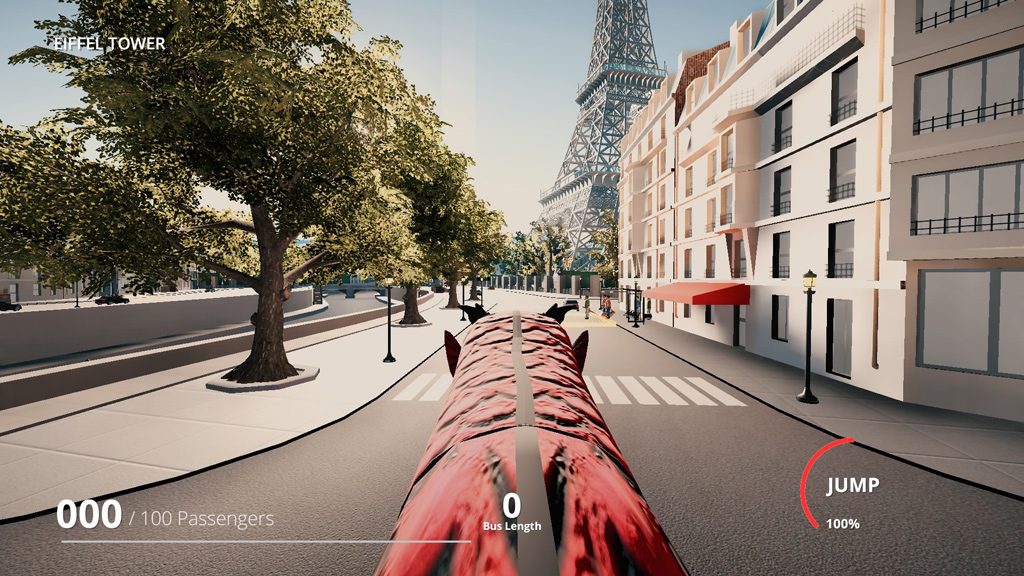 Snakeybus /sneɪkibʌs/ noun: a large motor vehicle carrying passengers by road, typically one serving the public on a fixed route but with the fare waived due to the abundance of long limbless reptiles on-board.

The term originated in Brazil in 1964, when eccentric military president Humberto Branco decreed that “Sunday would be snakeybus day” to goad poor citizens travelling to church for their sins by filling buses with a selection of wild and venomous snakes. The film ‘Snakes on a bus’ (2006) with Samuel L. Jackson as the bus-driving president Branco was eventually renamed and rewritten after bored studio executives walked out after 5 minutes, and the rest as they say, is history.

With Snakeybus the developer Stovetop LLC jettisoned the ‘Snakes on a bus’ concept and turned the idea on its head. Combining the ancient video game Snake (where you control an ever lengthening snake trying to avoid itself) with a Crazy Taxi style 3D score-attack arcade game. The twist being that as you pick up more people, your bus eventually grows to absurd lengths, clogging up the streets causing you to crash into yourself or take evasive action.

Evasive action comes in the form of the jump button which is recharged as you collect more passengers, but as the bus grows in weight and length, jumping is severely impaired. You can also accelerate and brake to a very limited degree but you are unable to stop meaning you are forced to make quick decisions constantly. Acceleration is there to enable you to beat the clock and make it to the worldwide leaderboards for longest bus achieved in quickest time.

Initially, you start with a standard Transit bus and a limited selection of environments but as your cumulative score builds across all the levels, new goodies are unlocked. There’s not a noticeable difference in handling between buses, but it’s fun driving each of the eccentric selections purely as they are aesthetically pleasing, particularly Carnival Dragon and the Double Decker.

Steering has a smooth but speedy feel which can be supplemented with a tap of cross to drift around corners but otherwise the enjoyably simple controls are ample for the game.

The opening level ‘Dorm’ has you driving around a small apartment on a variety of ramps and raised tracks and it’s a slightly claustrophobic and tricky opener. Curiously it’s reminiscent of Beautiful Katamari, particularly as the passengers are magnetically dragged into the bus along the floor as you drive past. Next up, ‘Seattle’ is a brilliantly designed multi-level city which gives more options for extending your snakeybus but at the same time, it’s a level filled with dead ends which needs some judicious thinking ahead in order to succeed.

‘Suburb’, ‘Paris’ and ‘Miami’ are all similar mini-city open worlds and all equally as enjoyable as each other, although after numerous attempts on each city, I found myself yearning for a bit more variety and bigger environments.

The strange abstract levels ‘Ring’, ‘Intersect’ and ‘Museum’ aren’t quite as enjoyable to drive around due to their stark design, but the tubulous space greenhouse level ‘Corious’ is a piece of gaming genius which sees you trying to avoid chasing your own tail around the inside of a huge tube.

Topping off the selection of different point scoring scenarios is ‘Cave’, a bizarrely tricky ‘fly through hoops’ underground cave level and ‘Endless’ which gives you the opportunity to defy physics on a mountainous island and create the longest bus EVER.

As well as tracks and buses, the main menu also allows you to change the gaming mode to Time Attack which requires a constantly growing bus otherwise it’s game over. A welcome distraction from the Classic mode which is more frenetic but not as enjoyably aimless.

Astonishingly, Snakeybus clocks in at under 600mb on your hard drive, and while it’s steadfastly old-skool in its gameplay, it’s remarkably pleasing to look at. The cel-shaded Suburb level and Paris are standout examples of how excellent lighting can transform some low res textures into bright, effervescent environments. The music is pretty good too with some chilled out jazzy weirdness to relax your frazzled snakey nerves after a hard day on the bus.

While Snakeybus doesn’t have a wealth of content and lamentably no multi-player option (aside from the high score tables), what it does have is playability with a healthy dose of humour running through it, as the name suggests. Within a few hours, you can unlock all the content and notch up some respectable scores but there’s always the compulsion for one more go which is hard to resist. The majority of the time, you’ll be having fun seeing how your vast trailing bus is filling the streets, still following the path of small jumps or mistakes which you made about thirty seconds earlier.

Do I Take The Bus?

Hopefully Stovetop will manage some additional DLC to add some longevity for the snakeybus, but if not, at this price point you’re getting a highly original and thoroughly enjoyable arcade game which is a perfect tonic to some of the more po-faced releases out there.

Highly recommended for a quick blast every time you need a pick me up. All hail the Snakeybus!

Snakeybus is out now on PS4, Xbox One, PC and Nintendo Switch.

Snakeybus will bring a smile to your face, which in this day and age, is a very welcome thing. Good wholesome score-attack arcade driving combined with some hilariously weird but subtle comedy elements, Snakeybus is worth inviting into your home.