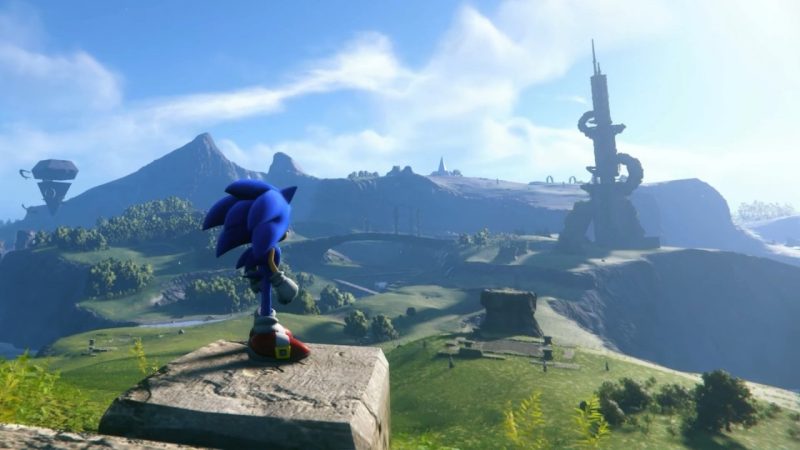 Sonic Frontiers PS5 Review. Sonic is back with another 3D adventure. Can it go the distance? Find out in PlayStation Universe’s Sonic Frontiers review for PS5.

The emotional rollercoaster every Sonic fan goes through with the announcement of a new game is really something. One minute it looks terrible, then previews give some hope, and for a minute, there’s a bit of excitement pre-release. Then, the results vary, but it’s a disappointment in some way. Especially with the 3D ones.

There’s stuff to like and even love about 3D Sonic games, and I myself have a fondness for the likes of Forces, Colors, Unleashed, and whatever you might say about Sonic Boom, it gave us a pretty good Sonic television series. We as a fanbase always try to find the best in even the worst of what Sonic Team has offered up over the years, and that is basically why we still keep the flame burning bright in the face of many underwhelming new Sonic games.

So, it’s with that in mind that I feel practically giddy saying Sonic Frontiers surprised me in the best possible way. Yes, it’s got a fair few of those classic 3D Sonic issues, but it essentially solves some of those by adding new gimmicks, and for once, these are gimmicks I’d really like Sonic Team to stick with beyond a single game. 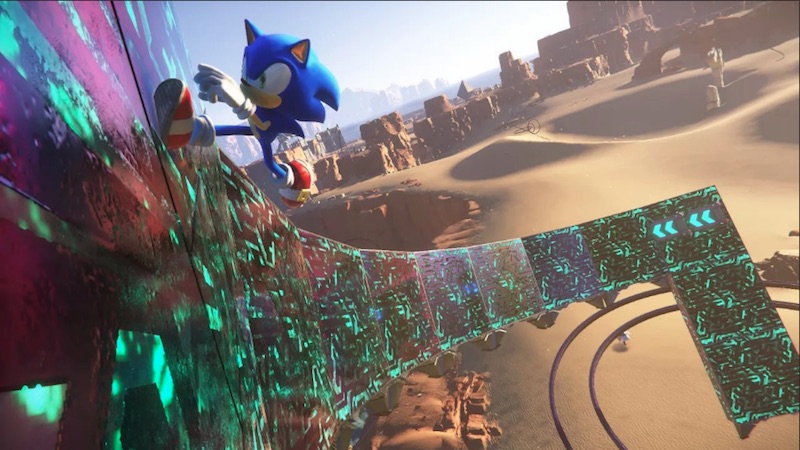 Sonic Frontiers essentially pushes the usual 3D Sonic stuff into the background and slaps down a meaty chunk of open-world tomfoolery that, while handled in a somewhat messy manner, is a real breath of fresh air for Sonic.

The story of Sonic Frontiers’ plot starts in much the same way many Sonic games do. Dr. Eggman messes around with something and Sonic gets dragged into it and is subsequently affected by the results. This time it drags Eggman and the Friends of Sonic into a digital realm, whilst the blue boy himself ends up in an ancient world that seemingly has a big connection to the legacy of the Chaos Emeralds.

Now, it’s very easy to see, but it’s worth pointing out that Sonic Frontiers takes more than a few ideas from several prominent Japanese classics. The key three I see are NieR: Automata, The Legend of Zelda: Breath of the Wild, and crucially for me, Shadow of the Colossus. At times it is eye-rollingly painful how obvious the ‘homages’ are, but I’d much rather Sonic Team took liberties like this rather than just go with the vague gimmicks that have generally plagued 3D Sonic games over the years.

Crucially, this shift to an open world doesn’t forgo the traditional Sonic stages; rather it incorporates them as areas to obtain vital keys. They are harder to find, but generally, when you do, they are based on the ‘classic’ Sonic level styles and prove to be the distraction from the new approach, and let me tell you…that’s exactly the way it needs to be at this point.

An Open World Setting That Doesn’t Overwhelm You

The open world is overcooked at this point, so doing it right means two things. The first is that you don’t overwhelm the player with things to do. Sonic Frontiers has plenty to do, but it never felt like work to me because I was too busy just discovering most of it whilst messing about with the world. That leads into the second thing. Make the world fun to be in, and despite some technical snafus, Sonic Frontiers is largely a very enjoyable experience in its open-world play. 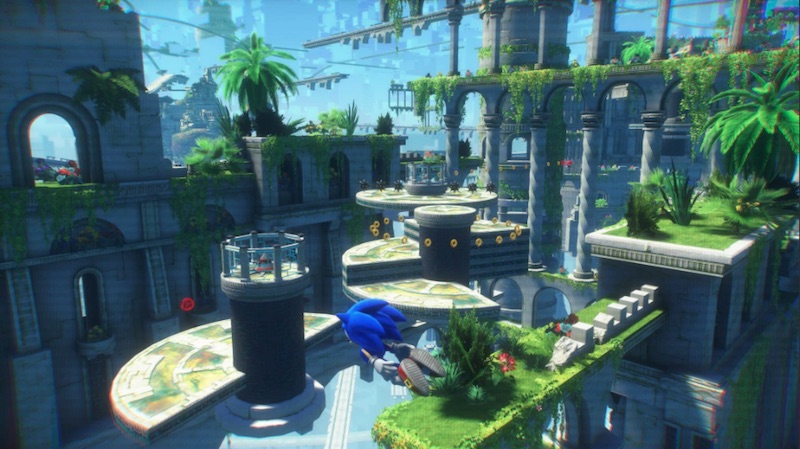 Personally, most frustration came from the traditional parts because they haven’t changed a bit. What Sonic Frontiers shows is that in order for 3D Sonic to work, the Blue Blur needs his space. The traditional levels don’t have that, and are as ever, largely hit-and-miss in quality terms.

So making those levels a bit of the busywork is actually a smart move this time around. They don’t outstay their welcome, and thanks to the spacing, they don’t have that relentless drudgery most modern 3D Sonic games are vulnerable to. They are given a freshness thanks to the chaotic muck that is the open-world of Sonic Frontiers.

The only tiny kink in that hose is completing objectives in the traditional levels unlocks keys that help progress the story, and that can be a bit of a grievance with certain levels, but it also brings to mind one of the strangest facets of Sonic Frontiers.

There are simply too many things to collect to unlock various aspects of the game, and it’s needlessly convoluted. Collect the adorable Kocos for permanent boosts to Sonic’s attack and defense. Collect fruit from fallen enemies to boost speed and ring count (rings really do act like a health bar here). Cogs to unlock traditional levels, keys to unlock other open world areas, tokens to free Sonic’s friends from a digital limbo, and so on.

It’s too many things and most of them feel like they overlap because you can obtain some of these items randomly on the map by using Sonic’s speedforce-style special that makes powerful visible loops from his speed trails. It’s messy, and incoherent, but forgivable.

Sonic Frontiers Is A Looker, But Suffers From Performance Issues

While I’m on the bad news trails, I have to point out that while Sonic Frontiers looks and sounds quite lovely (another cracking Sonic soundtrack, the one constant in this series), it suffers horribly from pop-in during open-world sections, especially after moving on from the initial island. It doesn’t tend to affect anything you actually do really, but it very much draws focus from the game when rails and platforms in the sky just suddenly appear a few feet ahead of you. 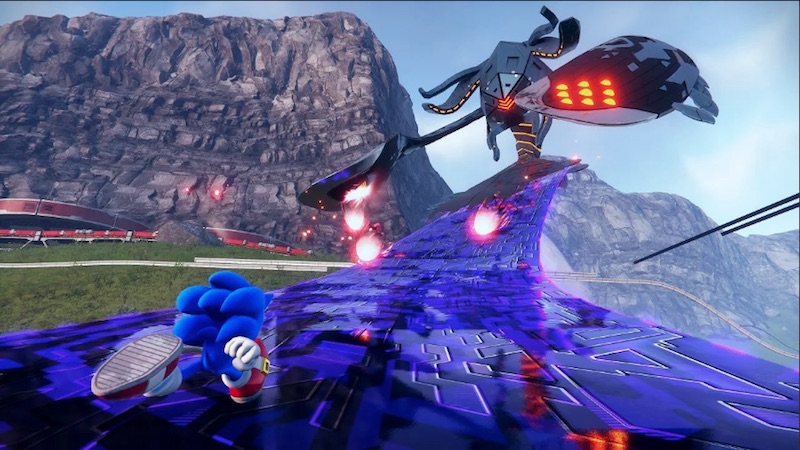 On a slightly jollier note, there is something quite fun about discovering a new set of ramps, platforms, and rails because they give you little taster versions of those hi-octane moments in traditional 3D Sonic levels with far less of the associated frustration. That, and you get one of Sonic Frontier’s countless shiny baubles out it most of the time.

When Sonic isn’t running around at the speed of sound, he’s naturally smacking enemies about, and Sonic Frontiers’ approach to combat is a tad more extensive than most, and yes, it’s a bit messy too. Still, its combo-crazy focus adds a bit of variety to encounters beyond speed-dashes and bopping foes on whatever passes for their head.

Better still, there’s roaming ‘mini-boss’ creatures that require specific strategies to defeat them. Whilst not as sophisticated as Shadow of the Colossus’ big puzzle battles atop the Collosi, there’s an air of that to these fights, just styled in a very Sonic way.

One example of these soars the skies, and can only be caught by getting aboard its trailing flat tail that just so happens to make a handy runway for Sonic where the beast shoots waves of energy back at him. When Sonic finally reaches the head, the tail morphs into a circular platform around the body, and there’s a back and forth involving dodging, parrying, and combos.

Another later one creates a ringed sandstorm that draws Sonic in, and he must wait for the perfect moment to strike its less lethal parts as it rotates and fires energy spheres out. There’s a strategy to almost every enemy in the open world, but these encounters are far more drawn out and satisfying. 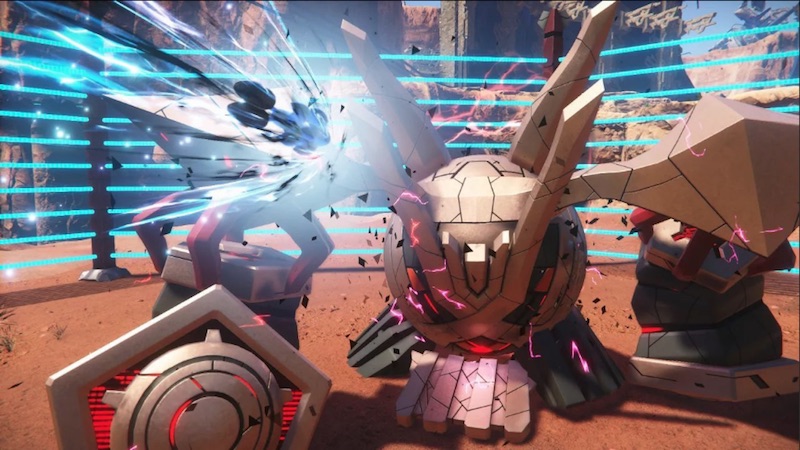 Just as you’ve gotten used to what is on offer, the next island shows up and a new set of enemies with their own quirks materialize.

Sonic Frontiers is unrefined, but there’s still something about it that just feels like a bit more care has gone into this one. It’s an odd duck in many ways because it has its problems, some of those held over from previous titles, but it just feels good to play for the most part and that’s really all I could ask of a modern Sonic game. I’m consistently enjoying a 3D Sonic game again for the first time in years, and that’s a magical feeling.

Sonic Frontiers begs, steals, and borrows to create a better 3D Sonic title than we’ve seen in quite some time. There’s absolutely still room to grow, but this is a largely positive step forward for the franchise outside its 2D roots.