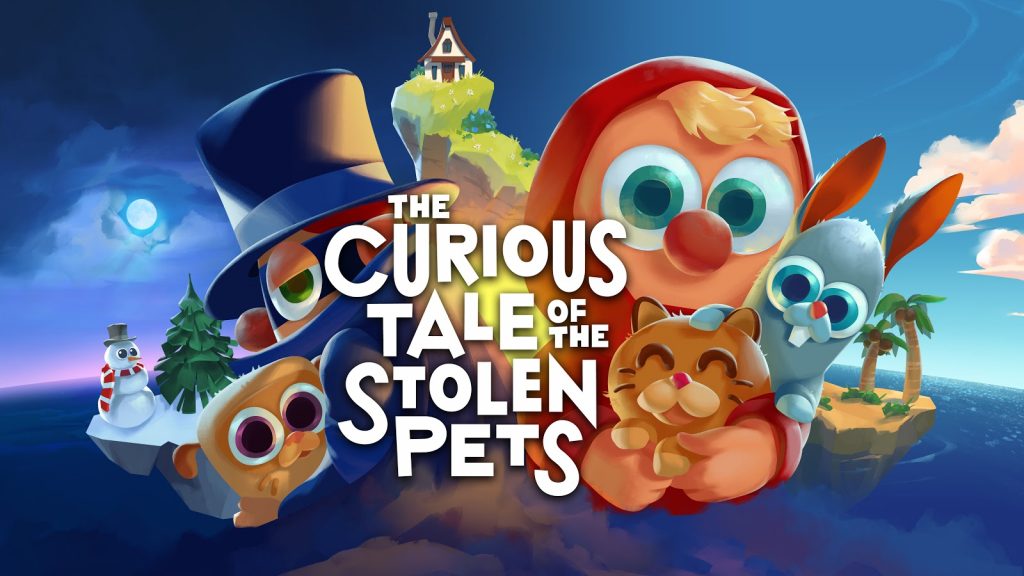 I didn’t mean to, but I played the entirety of The Curious Tale of the Stolen Pets in one sitting. When it was over, I sat in my chair for a few moments and stared at the brief credits on display (there are so few that they don’t need to scroll). I was simultaneously satisfied with the magical little experience and somewhat bereft at the fact that it was over.

The Curious Tale of the Stolen Pets PSVR Review

The Story Is Charming – But Not The Point

Though there is an overarching story outlined (which I won’t spoil here), the meat of Stolen Pets is played out in its five floating diorama worlds. Each level is somewhat akin to a puzzle box. Hidden within the structure floating in front of the player are five cute little animals and around eight or nine hidden coins. It is up to the player to pull, tug, and manipulate the objects in the diorama, figuring out how it all fits together to reveal the “stolen” pets.

Who stole the pets? Well, no one, it turns out. The pets seem to be more shy than stolen, hiding in caves and under rocks, revealed by a semi-complicated series of actions by the player. Once they have been discovered, the player can poke at the pets and watch them dance about and make adorable little noises.

Stolen Pets Is A Visual Delight – With Sharply Clever Puzzles

The levels themselves are visual marvels, floating among swirling clouds. Spires tower over the player, and nooks and crannies hide secret objects. Each world has a theme – everything from summer vacation to a prehistoric volcano – and each is drenched in a child-like nostalgia.

Note that I say ‘child-like’ and not ‘childish’, because I don’t want to give the impression that this is a silly or slight game. While kids would enjoy Stolen Pets, adults might need to assist them a bit with the puzzles. There are some head-scratchers tucked among these idyllic floating scenes.

The first thing I did when presented with each world was slowly turn it in front of me, marveling at the design and poking gently at different areas to see how they might react. I would get down on the floor to look at it from underneath and stand from my chair to look at it from above. I wasn’t overdoing it – there is sometimes stuff up hidden on top and stuff tucked down below.

Then I would start digging in, picking up various objects and placing them in different areas of the worlds, trying to see what would click – either in my head or in the world itself. In each world, a couple of pets were quickly revealed, but others were more elusive.

The second area – a snowy mountain with a delightful little train wrapping around it – stumped me for so long I actually had to leave it for a few minutes and go back to the hub to ponder. Returning to the mountain, fresh eyes allowed me to quickly see what I should do – and I felt super clever for figuring it out. These are the best sorts of puzzles – the ones that make you feel smart for solving them.

In addition to the pets, the worlds are alive with other characters. Animated in a delightful stop-motion style, these characters wander in and out of doors, popping about the diorama and sometimes reacting to your actions. The effect is so damn charming that it almost shatters the charm meter.

Puzzle Games Lack Replay Value – But That Shouldn’t Stop You

There are only a couple of drawbacks to The Curious Tale of the Stolen Pets. The first is that the game is very brief. Of course, the length of the game will vary depending on how quickly you work out the puzzles. But I would expect that most players with a reasonable amount of experience with puzzle games could push through this title in a couple of hours.

The second issue is the lack of replay value (to be fair, this is always the issue with puzzle games). Once you have solved all of its puzzles, I could maybe see popping back in to Stolen Pets to finish off the trophies. But once that is complete, you are pretty much done. I would be interested to see a speed runner take a crack at this game, though. I suspect that a skilled run could be completed in less than ten minutes.

If you do pick up The Curious Tale of the Stolen Pets, know that you are signing up for a one-time trip to spend a couple of hours being completely enchanted. Beyond that, the remaining value of the game will be found in sharing it with others – this is a low impact but highly engaging VR game that would be a great way to introduce others to the format.

However, the brevity of the experience is no reason not to experience it. This is a very nicely made game, clearly constructed with both a lot of heart and a witty eye for detail. In a season packed with new whiz-bang VR games, it would be a shame to let The Curious Tale of the Stolen Pets slide under your radar.

Sometimes you just want to smile and play, and The Curious Tale of Stolen Pets made me smile and chuckle more than any other game in recent memory. This game is utterly delightful.

Review code for this title kindly supplied by the publisher. The Curious Tale of the Stolen Pets releases digitally on November 19, 2019.

The Curious Tale of the Stolen Pets is so packed with charm that one might underestimate some of the sharply clever puzzles involved. Though it you will probably only play it once, that’s no reason to skip on a game of this quality. A complete delight that could only exist in VR, Stolen Pets bursts with nostalgia and fun.

The Curious Tale Of The Stolen Pets