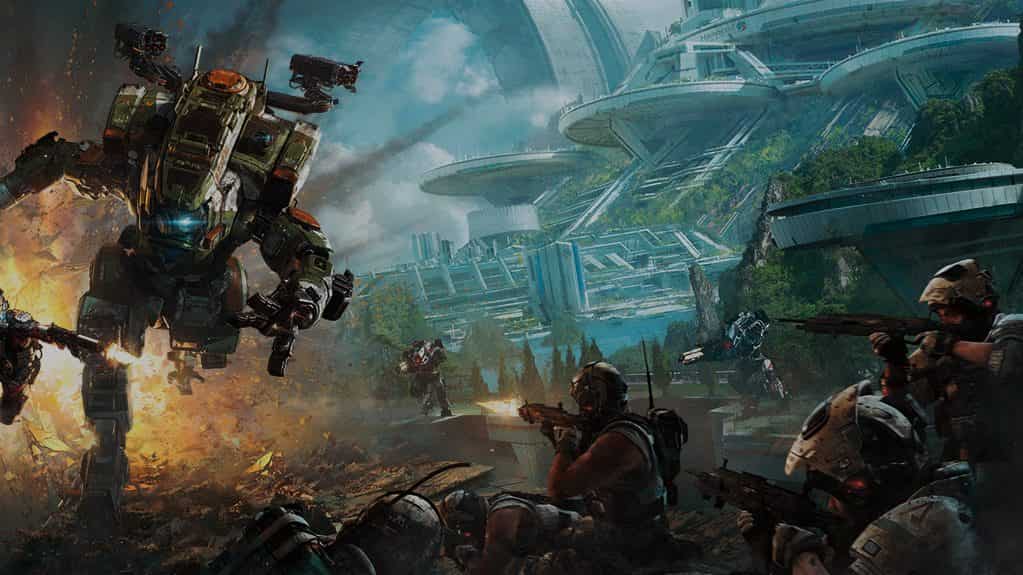 What a year we’ve had for shooters. Doom, Battlefield 1, Overwatch, Homefront, and then there’s this, arguably the best all round game of the lot, Titanfall 2. A magnificent shooter package that should be in high consideration for Game of the Year 2016. The original game, from developer Respawn, won plenty of plaudits, but an online-only focus and gated content (being on a console lagging behind at the time didn’t help either) killed off player numbers very quickly, and Titanfall 2, as magnificent as it is, has been paying the price of its predecessor’s shortcomings.

Forget all that negativity however; what is it that makes Titanfall 2 so very good? Well, for starters it has a single-player campaign, and a very good one at that. You play a fresh-faced grunt who invariably gets caught up in an ongoing war, and after your mentor saves your worthless hide on the battlefield, he dies and passes you his Titan, the exquisite king of robo-deadpan BT, and his mission.

The story is very much a by-the-numbers affair, with underdeveloped, if interesting, boss characters and an ending you can see a mile off; it doesn’t really matter though, as Respawn has structured and presented the campaign in such a way that it rises far above the trope-filled narrative. Both in terms of the scenery (exotic planetscapes and busy factories) and in pure gameplay.

Things start as you’d expect: a bit of world-building here, a bit of mechanics intro 101 there, but Titanfall 2’s campaign is constantly shifting tone, location and pace, never dwelling on anything for longer than is needed. There’s two or three really big shifts in style during the brief runtime (six-seven hours at best) that arrive without fanfare, thoroughly enthrall you, and abruptly leave, never calling in again. When this happens it may leave you longing for more, but there’s never a point where you’re left bored by the campaign.

The design of it perfectly blends the speed and satisfying gunplay of older shooters like Quake 3, Unreal Tournament and the like, with the ingenuity of Valve’s best work. There’s a whiff of Portal and Half-Life, not so much in tone, but in the creativity of the way you can traverse each level. One level involves some beautifully frenetic platforming combined with plentiful combat and it’s food enough for that combo alone, but the way the level is designed is among the finest examples in modern gaming of combining creativity and enjoyment to the full effect.

When the game isn’t being all clever with its setup, it’s bringing you pleasingly effective combat that gets seriously intense during some of the later set-pieces. That combination of fluid player movement and punchy weaponry (the shotgun is marvelous) means each battle is highly enjoyable. As much as the boss characters are underdeveloped (with one late exception that provides a smart twist on what you’d expect of a climactic fight), the boss battles themselves are great.

Confined to an area (not just small arena rooms either) with environmental hazards, they are a great throwback to classic boss battles, but with all the lovely toys BT picks up along the way (including, a jet pack, a ruddy great sword, a flamethrower, and over-the-top missile barrages) it splashes enough of its modern stylings onto the design canvas to bring them up to date.

Before you know it, Titanfall 2’s story has finished, and while the overall plot and ending are somewhat underwhelming, you’ll still leave feeling thoroughly satisfied because the way the game is made almost completely nullifies that issue. I’ve personally not played a single-player shooter this fun, creative and intense since Bulletstorm, and it’s restored my faith in the genre a bit. The clincher though, is the multiplayer.

As Good As The Single Player Campaign Is, The Multiplayer Modes Are Even Better

The multiplayer, fortunately, is also quite splendid, and has a high level of accessibility to welcome players of different skill levels. Usually matches are 5v5 or 6v6 with certain modes complemented by AI-controlled grunts and mechs to make games appear far busier (and provide some easy points for less skilled players).

In most standard modes, you begin as a pilot, and through your actions (kills, assists, attacking and defending points etc) you build towards your boost (one-off specials such as robotic bomb ticks and automated sentry guns) and onwards to gaining control of your Titan (of which there are several types with different abilities and primary and secondary weapons). The swift pace of multiplayer and the ease of which you can gain points/XP means you’re practically guaranteed to get your Titan at least once per round.

Modes include the popular Attrition (deathmatch, but with AI soldiers and robots thrown into the mix, Amped Hardpoint where you capture points to multiply your score, Bounty Hunt, slightly similar to Attrition, but you make cash for your team with kills, and at the end of a wave, you can race to a bank to potentially double your money (and your team’s), but the cash can be stolen if you die. Beyond this is the usual smattering of game types: Titan vs Titan, Pilot vs Pilot, Skirmish and even good old fashioned Capture the Flag, a mode I’ve missed in recent times, and it’s still a fun time here.

There’s plenty to dip in and out of, but there’s little doubt that the likes of Attrition, Amped Hardpoint, and Bounty Hunt are the standout modes currently.

The initial set of maps, of course, make great use of the verticality and agility that Pilots need to thrive, but it’s balanced nicely with enough wide open areas for Titan battles to work effectively. It’s a testament to the design of each map that they can be played just as well with Pilots or Titans only as they can be with both. Certain weapons are at a disadvantage on certain maps, but pleasingly, there’s almost always an alternative way to make them work with a map—you just have to do a bit of thinking.

Ranking up does the usual unlocking of skills, abilities, skins and weaponry (though you can buy early with in game currency) and everything unlocks in a steady way. It can feel like the in-game currency is handed out a bit stingily (unless you play during happy hour and get ranked up quicker), but there’s very little disparity in what’s available to you at the start and, say, 30 hours in, because the game is pretty reasonably balanced and fair for the most part.

For me, one of the most interesting features in multiplayer is actually an omission. The game stats focus only on what you have done instead of pointing out how many times you failed, with no death count ot win/loss ratio easily to hand, and this plays a big part in encouraging players to persevere through tougher times. It helps create a more gentle, welcoming multiplayer experience, but doesn’t stop players from becoming better at it.

More importantly, it’s consistently exhilarating and enjoyable. The pilot’s wall-running, gunplay and mid-air melee ballet meshes beautifully with the more destructive, tank-like control of the Titans. Even though the first game had this, it remains a novel splicing of combat between humans and machines, with a smooth transition from one style to the other ensuring there’s no jarring effect. Few things in Titanfall 2 are a giddily exciting as rampaging in your Titan, ejecting out, wall-running around the back of an enemy Titan to pull out their last battery, thus destroying them, and catapulting yourself back into your own Titan’s loving embrace to resume your destruction.

Titanfall 2’s multiplayer is full of little moments like this, a surefire way to tell you’ve got a good time on your hands is when you can easily recall stories of things you’ve done, such as preventing an opponent from reaching a flag by drop-kicking them to death in mid air; or going mano-a-mecho with a Titan and taking it down with your grenade launcher, or riding a teammate’s Titan, sniping opponents from on high. I’ve played so many hours of Titanfall 2’s multiplayer and it still manages to provide me with these little moments of personal triumph that greatly enhance the already wonderful experience. It’s not as complex as its rivals, but that’s the intrinsic beauty of it.

Titanfall 2 Is An FPS Of The Generation Candidate

Having had plenty of time with Titanfall 2, my fondness for it has only grown with every passing day. An ever-growing appreciation for the smaller details has been cultivated over time you could say. The original game was very short-term fun in my eyes, a limited, half-baked idea not seen through to fruition, but Titanfall 2 is the whole bloody harvest.

I genuinely never believed I’d be as enamored with the game as I am, having grown greatly disinterested with first-person shooters on and offline. Respawn has shown their pedigree here, and produced not only the best overall shooter of the generation, but one of the best games in general.

Titanfall 2 is out now on PS4, PC and Xbox One.

A frenetic, enthralling, and inventive shooter in both single and multiplayer, Titanfall 2 is a spectacular beast of a game that is deserving of a place among the greats of this generation.