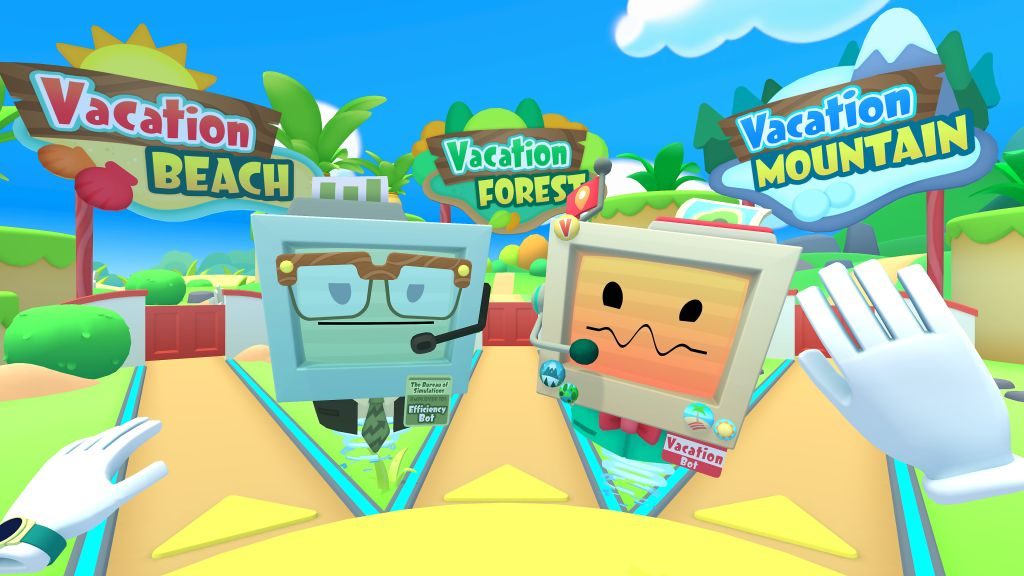 With a gentle sci-fi wit and a respectable number of fun mini-games and activities, Vacation Simulator has emerged from behind the clouds to bring its sunny take on human leisure time to PSVR. The sequel to perennial PSVR hit Job Simulator, Vacation Simulator uses the same conceit – computers attempting to teach humans how to behave in various scenarios to push the franchise in new directions. The resulting effort is a game full of sunny family-oriented fun.

Vacation Simulator takes place in the same weird universe as Job Simulator. Though it is never explicitly stated, the player gets the sense that most humans have been wiped out, and the humorous robot characters that hover in every location in the game are in the process of re-introducing the species.

The player does not engage in vacation activities, precisely. Rather, they participate in the robots’ interpretation of what these activities might have been. This puts the player in the middle of a tug-of-war between “Vacation Bot”, who generally wants the player to have a good time, and “Efficiency Bot”, who wants metrics to prove that a good time was had, damn it. This slight conflict supplies just enough narrative to give Vacation Simulator a “story”, which is a step up from its predecessor.

The first apparent difference that Job Simulator veterans will notice is the relative freedom that the player is given. After a brief introduction that introduces the player to their vacation “suite” and allows some mild character customization, the world opens up like a flower and the player is given the freedom to go almost everywhere.

There are three primary vacation destinations – the beach, the forest, and a snowy mountain. From the very beginning, players can visit any of these, and then play around with almost any of the activities within them. Activities are structured around travel nodes that the player can bounce between at will. Pop over to the node and wave at the attending robot and you are off to the races.

You can take part in any of the vacation activities – or not. Its entirely up to you. Sick of the cooking minigame? Bail in the middle and go do something else. There are plenty of other things to do, and you can always go back and pick it up again later.

There are all sorts of fun things to do in Vacation Simulator. Some of the activities involve puzzle-style challenges (constructing sand-castles to blueprint spec from a variety of blocks), some require a one-time mystery be solved (find all eight species of undersea life at the sunken ship), and some are top-score chasing dexterity challenges (downhill ski-machine, various sports-based trials). Nothing in the game is too strenuous; everything is fairly tongue-in-cheek and breezy.

Successfully completing activities rewards players with “memories” (stored in a MagicBand-style wrist band). A few of the most advanced activities are hidden behind a gate that requires a certain number of memories to be accumulated before opening, but these barriers are so low that most players will blast past them in a matter of minutes. Indeed, these gates seem to be set up more to give the player a sense of structure and accomplishment than to actually force any sort of gameplay requirements.

If you are a fan of Job Simulator, everything you loved about the first game is still here. There’s just more of it.

If you want to go to one of the vacation destinations and just dick off by flinging stuff around, that’s still a totally viable option. In fact, “dicking off” gets a new level of depth, as players are now provided with a backpack that they can stow objects in for transport. This allows players to take stuff from one environment and haul it somewhere else to see how it reacts.

I particularly enjoyed how this element was sometimes used to solve particular riddles. If you are having trouble figuring stuff in a particular environment out, think about the other places you’ve been. You can likely go grab an object from somewhere else to solve the problem vexing you.

But yes; you can still put pickles on the grill, and bottles of suntan lotion in the copy machine. You can still eat inappropriate things, and vomit all over the simulation. You can still pick up objects and gleefully fling them into the faces of the oblivious robots.

Of course, Vacation Simulator still suffers from the same issues that Job Simulator, Rick & Morty Virtual Rick-ality, and almost every other physics-based sandbox VR games are afflicted by – the lack of ability to reliably pick stuff up off the floor. For a genre that allows players to throw stuff around with abandon, coming up with a solution to this issue has taken ages.

In this case, the player is asked to kind of hover their hand above items, which are then summoned to their grip via force-like levitation. The trouble is, this only works about 30% of the time. The rest of the time, stuff is raised about a foot from the floor, refusing to make the leap the rest of the way into your hand. This mechanic was the first thing I tested when I got into the game, and the fact that the mechanic is still a disaster got me started with a bad taste in my mouth.

It is this sort of forward thinking anticipation of the players silly impulses that make Owlchemy Labs’ games fun. Any dumb action you think to take, the devs have already thought of, and they have constructed a fun and appropriate reaction. Put a shell to your ear if you doubt me. Kiss a blowfish. Take a snowball to the beach. Owlchemy Labs is way ahead of you.

The fun to be had in Vacation Simulator far outweighs the fumbling about that comes as part of the package. And as a family title, this series can’t be beat. I can attest from experience that kids (and teenagers) are entertained for hours by dorking around and yelling at each other to “drink the coolant”.

Vacation Simulator is the perfect follow-up to Job Simulator – giving players more of what they love with enough new wrinkles to prevent it from feeling like someone put the original game in the photocopier. If you are at all a fan of Job Simulator, you will want to pick this one up. You might blow through every activity in a couple of play sessions, but vacations aren’t supposed to last forever.

Vacation Simulator is out now on PSVR.

Vacations are supposed to be fun and breezy – and that’s exactly the way I would describe Vacation Simulator. Full of silly laughs and sunny good times, Vacation Simulator also delivers just the slightest edge of dark humor to keep teens and adults engaged. With a wide variety of puzzles and activities - any of which can be skipped – Vacation Simulator has a bit of something for everyone, while expanding on the original game in interesting ways.