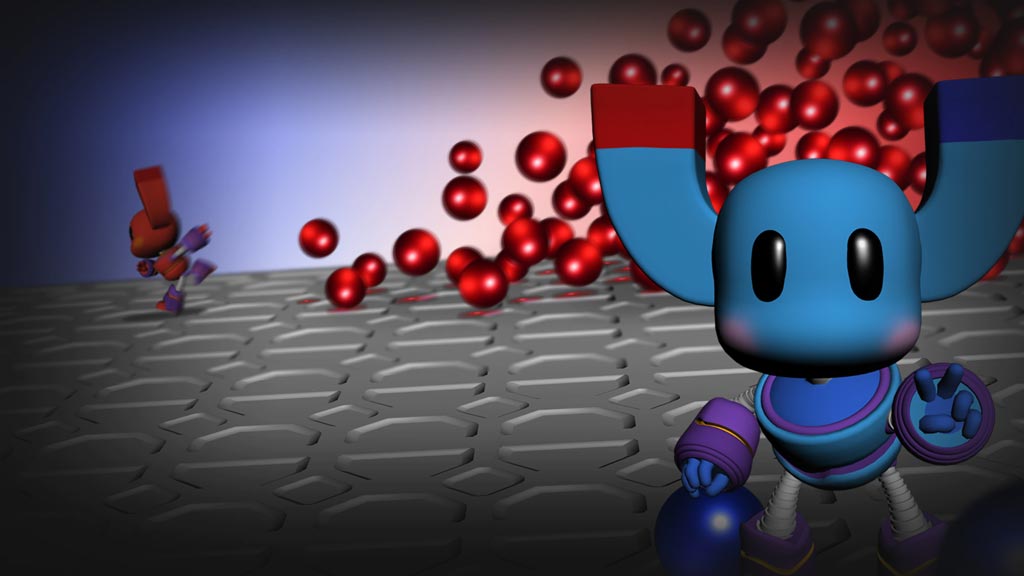 Waves Out! PS4 Review – As Dreams has amply demonstrated, there are a vast amount of talented and innovative bedroom game designers and developers out there waiting to be discovered. This dates back to the home computing boom of the early 80s when many commercially available ZX Spectrum and Commodore 64 classics were programmed by a lone enthusiast from the comfort of their pungent bedrooms.

As the industry grew over the next thirty years, budgets and expectations grew along with it meaning mainly large teams with a similarly large financial backing dominated the release schedules. Microsoft’s Indie Game programme on the Xbox 360 stepped back from this bloated precipice and encouraged smaller developers to step into the limelight with many quirky and creative projects and Sony is similarly fostering prospective developers in Spain with their PlayStation Talents programme from which Waves Out! emerges.

But micro-budget aside, does this new take on Hungry Hungry Hippos match the quality and consistency of the Indie Games royalty?

Hungry Hungry Hippos, the classic table top 2-4 player game which involves hammering your hippo’s rear-end in order to munch as many balls as possible before your opponents munch them has vaguely inspired Waves Out! with its focus on magnetising balls and guiding them to the nearest hole.

While this all sounds vaguely pornographic, unfortunately it’s nothing that exciting, particularly in videogame form where play is limited to two players, removing most of the hilarity and frantic gameplay inherent in the plastic hippo bashing against three other people in the same room (Nb. all three of these people would need a recent negative COVID test in order to participate). 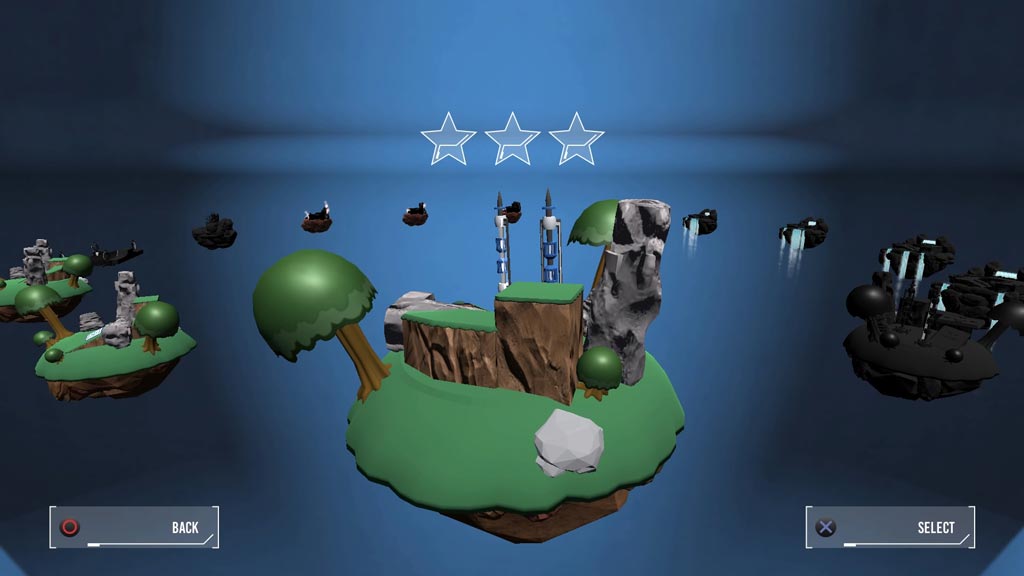 After the alarmingly simplistic menu screen and incomprehensibly unhelpful tutorial level, as a solo player you can choose to work through the selection of levels against the clock. The opening level is simple enough to work through once you realise that tapping the magnetise button (rather than holding it) is the only way to persuade the balls to stick to your player as they meander towards the nearest hole/goal.

Magnetising the balls changes them to red or blue depending on the player, so when they drop into the score hole, the tally is added to that person’s score. Blue icons appear on the play area which when collected allow you to activate your minion with R2, a ghost which can help you magnetise balls within a greater area. Lightning bolts allow you to activate magnetic rods placed in the corners with the right stick in order to steal your opponents balls.

Jumping allows you to hop over low walls but trampolines can be used to jump over high barriers to reach certain power ups, but your magnetised balls remain on the ground. Other than that, a few switches in the play area open up gates for a limited time and floor arrows propel your balls across small gaps. 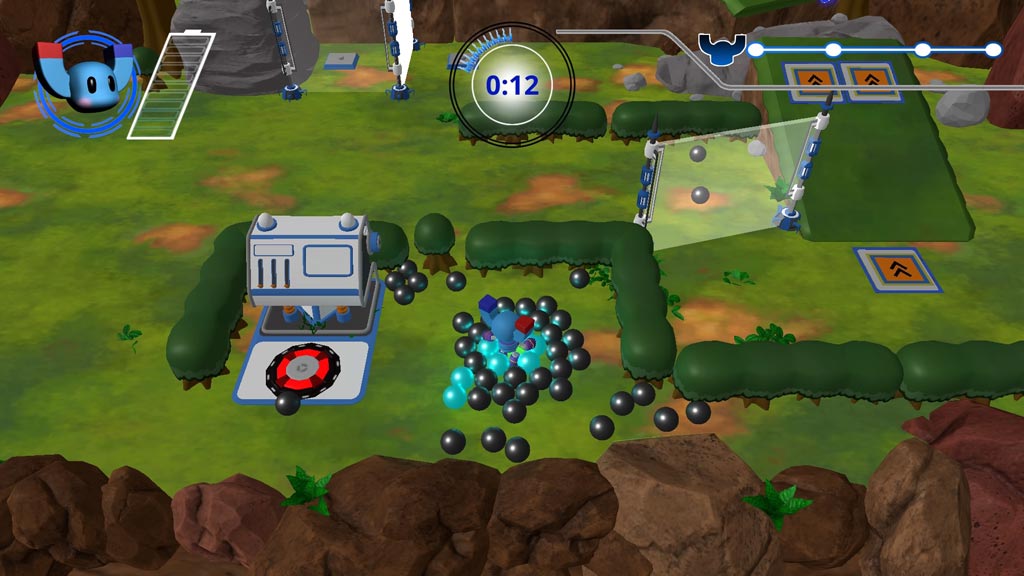 The Tip Of The Frustrating Iceberg

This may sound like a recipe for some interesting or competitive gameplay but in reality it is anything but. The sluggish movement makes the whole experience feel like you’ve taken a horse tranquilliser and the glitchy controls mean you can inexplicably become stuck on parts of the play area whilst you’re trying to corral the wandering balls in some sort of direction.

This is the tip of the frustrating iceberg – the limited time allowed for each ’round’ means you barely have time to try and score on a flat surface, let alone operate switches to get towards a goal at the top of an incline which pretty much relieves you of your balls every time.

Level design consists of multiple versions of a collection of ‘base’ areas, with added complexities each time you return and considering the primitive PS2 nature of the visuals, repeating any of the zones smacks of laziness. In addition the slow pace and the deeply unsatisfying basic gameplay means that trying to negotiate these fiddly play areas in order to score just a few points will test the patience of any saints who are unfortunate enough to placed in Waves Out! purgatory. 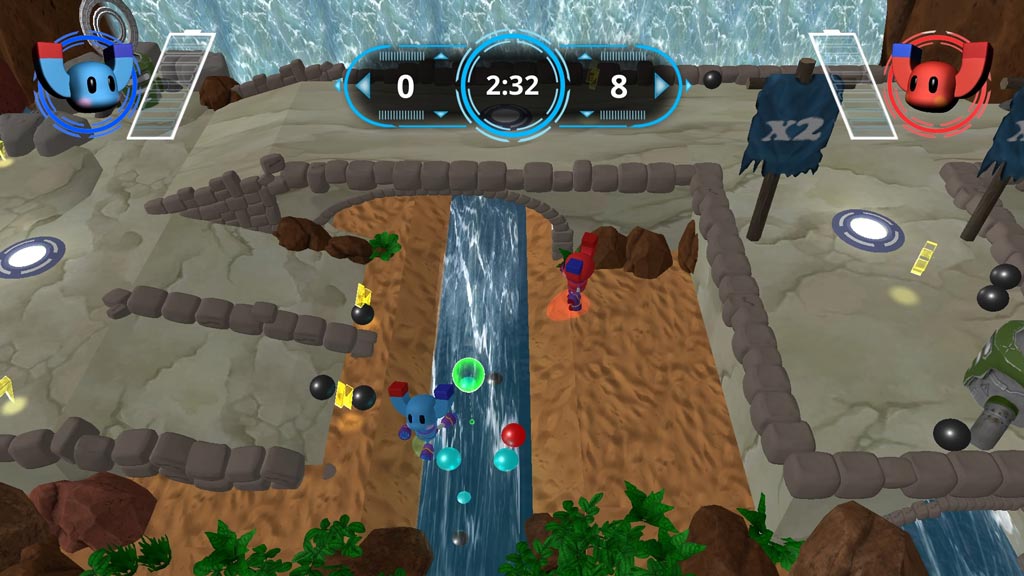 The 1vs1 (two player) option is marginally better than playing alone against the clock, and I managed two rounds against my 8 year old daughter. We both got bored and frustrated of getting stuck or trying to work out how to even get to the goal before the time had elapsed, let alone score any points. Any sense of competitive fun was conspicuously absent, along with the option to play against more than one other person.

The main issue which sucks any potential joy out of the game is a complete lack of flow in the gameplay, making a simple concept far too fiddly, complex and deeply unsatisfying. Frantically racking up some high scores against three other players in the same room would have evoked the spirit of Hungry Hungry Hippos rather than choking a promising idea with unnecessary busywork. 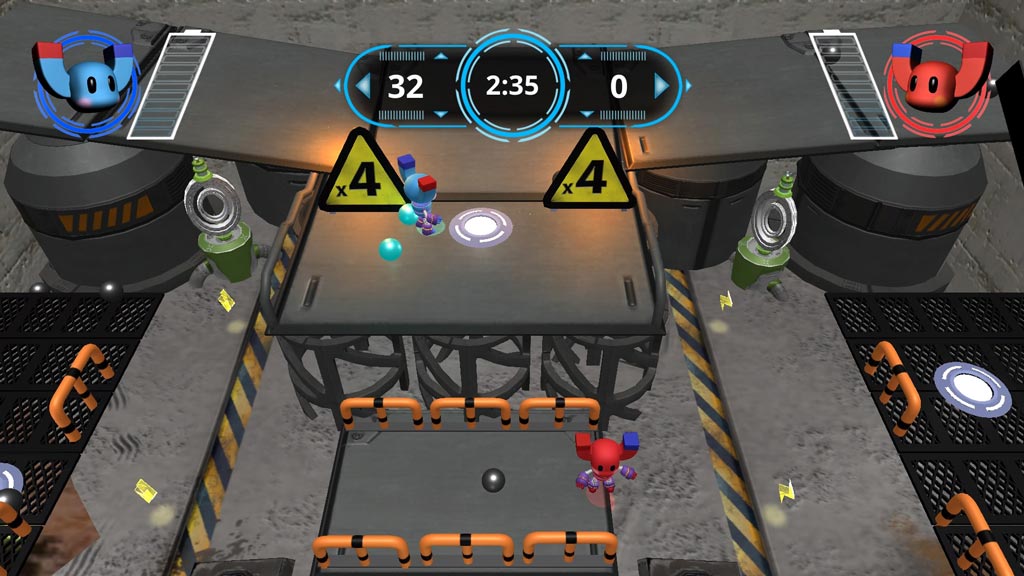 Why Wasn’t It Called Magnoballs?

So overall there’s nothing to recommend the strangely titled Waves Out! which is a shame as the basic concept is promising but the execution is so dire; it’s hard to believe it was released in this state. The dated presentation wouldn’t have been an issue had the gameplay been enjoyable, but as it is, the majority of games created in Dreams look, sound and play better than this.

Slating an indie title never feels good but when I come away from trying to find good things to say about a game and I merely have a list of annoyances, its my duty as a reviewer to make sure you don’t waste your time and money on a substandard product. Why this has been released, even at a budget price point beggars belief.

For some far more enjoyable couch multiplayer games, check out our guide here.

Waves Out is available now on PS4.

Waves Out! manages to suck all the fun out of its own potentially enjoyable concept of magnetising balls in order to score goals with fiddly play areas, sluggish gameplay and no sense of competition whatsoever. Stir in a missing four player option and some truly dated visuals and you have a recipe for disaster.