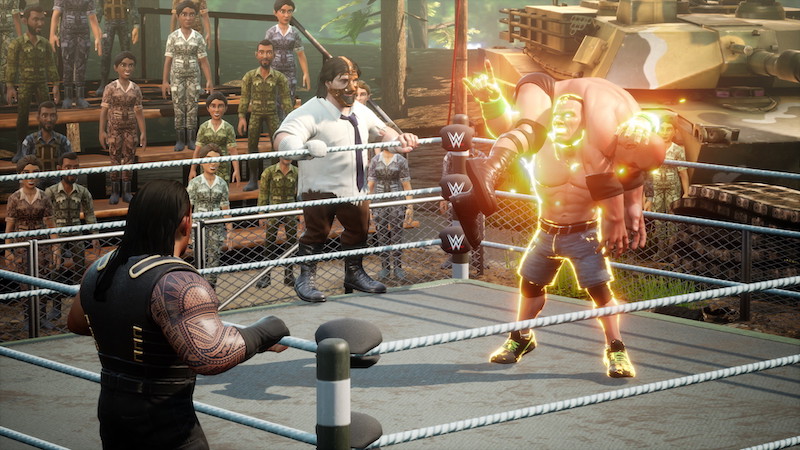 Refreshingly, WWE 2K Battlegrounds requires zero previous investment in either the WWE 2K titles that have come before it, or even the sport itself. Designed as a much more breezy, arcade style affair that stands in sharp contrast to the simulation trappings of the WWE 2K games, WWE 2K Battlegrounds easily accessible multiplayer modes and controls make it a great choice for causal play and when you have a bunch of friends huddled around your PS4 or PS4 Pro.

The casual and less-than-serious nature of WWE 2K Battlegrounds is reflected in every aspect of its presentation too. From the exaggerated proportions of the wrestlers themselves whereupon they boast abnormally large heads, arms and legs, to superstar entrances which has them busting out of box/coffin/case and more in a shower of fireworks, it’s clear that the WWE 2K Battlegrounds is intended to be taken with tongue very much in cheek.

Another nice little touch is how additional wrestlers are unlocked. Obtained with either premium currency paid with real-life money or through Battleground Bucks which can be earned in-game, these new character bust out of action figure blister packs in a way that’s cool and immediately charming. I know it’s a small thing in the grand scheme of things, but it really does add to the overall loudly fun audiovisual presentation that WWE 2K Battlegrounds has going on.

That playful, lightheartedness extends to other aspects of the game too, including most notably WWE 2K Battlegrounds main campaign. Told from the perspectives of Paul Heyman and Stone Cold Steve Austin, the two legendary industry figures find themselves jetting across the world to discover untapped talent for the new WWE Battlegrounds league.

Unfurling as a series of comic book pages and frames, WWE 2K Battlegrounds campaign is a humorous and easily digestible affair through which players are given a taste of each of the five main classes as they tangle with a full roster of WWE superstars en route to a final showdown at Wrestlemania. Beyond that, this story campaign also provides players with oodles of unlockable abilities and in-game currency to purchase new wrestlers and upgrade special talents – so let’s talk about that.

While the initial roster of selectable superstars is small, by earning more Battleground Bucks by completing everything from exhibition modes to tournaments, special battleground matches and the campaign itself, it isn’t long until you’ve earned enough Bucks to unlock whoever it is you want to unlock. As such then, the grinding that you have to do in WWE 2K Battlegrounds pretty much happens without you realizing for the most part, as you’re rewarded so frequently for just about everything you do.

By far though, WWE 2K Battlegrounds most overarching problem is that there isn’t enough depth in its core systems to properly satisfy those who want something a little bit more than a furious five minute session in the ring.

Chiefly, this first noticeably manifests itself in the selection of moves that are available to each player. Because there are only five broad class types for each wrestler, high-flyer, brawler, all-rounder, power and technical, there really isn’t a whole lot of difference between one wrestler and another in those categories and so the variety of moves is lessened greatly as a result.

And this is where you begin to realise that WWE 2K Battlegrounds isn’t any sort of full-fledged sequel to WWE All-Stars. Sure, it boasts a similar look, but it has a mere fraction of the depth. There are far less potential moves per character, too few different moves overall and a countering system that only goes one interaction deep – which is something of a disappointment considering that in WWE All-Stars you could create some epic counter chains. Here though, once you’ve countered someone – that’s it; they don’t get a comeback.

There is a little sophistication in the various skills that can become available to each character, such as providing additional damage, extra defense or the ability to heal over time, WWE 2K Battlegrounds still feels far too simplistic all the same.

Another aspect of WWE 2K Battlegrounds that is far too basic is the character creation. You have such a desperately limited number of character types, body parts and moves to customise your character with that like the actual wrestling itself, they can’t help but feel more shallow and repetitive than they otherwise would. Don’t get me wrong though, for those folks who aren’t intending to invest significant time into WWE 2K Battlegrounds (and that also includes me on days when I just need something quick and entertaining that isn’t going to tax what’s left of my skull jelly), the game hits the spot with unerring accuracy.

The visuals and sound are both loud, the moves are over-the-top (you haven’t lived until you’ve seen one wrestler throw another sixty feet in the air before bringing them down to earth with a bone-shattering neckbreaker), and then there are the environmental hazards which can be leveraged such as hyper-excited goats, elevated cars which can be dropped on top of opponents and ravenous alligators that can massively damage enemy superstars. Oh, and you also get to crumple a ring in true Brock Lesnar vs Big Show style too.

A special mention must also be made of the commentary too. With Jerry “The King” Lawler and the now future-endeavoured Mauro Ranallo providing commentary duties, WWE 2K Battlegrounds has a real energy to it that the lacklustre, dull-sounding and repetitive commentary tracks of the WWE 2K games have been able to achieve.

Then there are the small handful of bugs that are currently plaguing the game too. While watching a glitchy backcracker move is one thing, simply not being able to execute a move at all (in this case a running grapple), is quite something else. Additionally, I’ve also had the game crash on me two times during play – so yeah, no really ideal.

WWE 2K Battlegrounds is out now on PS4.

Far less stuffy than the mainline WWE 2K series and designed for quick bursts of entertaining casual play with friends, WWE 2K Battlegrounds lack of depth and technical issues sadly undercut its energetic audiovisual presentation. Hardly the sequel to WWE All-Stars that so many wanted, WWE 2K Battlegrounds could simply be so much more - but it just... isn't.