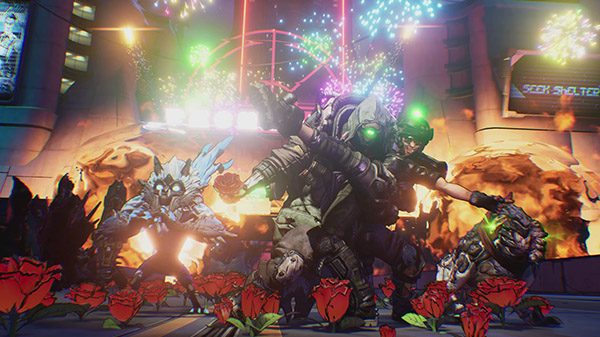 A brand new Borderlands 3 CG trailer has just dropped. This CG trailer focuses on playing with your friends and having fun.

This trailer certainly takes the silliness of Borderlands 3 to a whole new level. However, I dig it. It’s off the wall, crazy, and showcases the typical Gearbox humor in a new and exciting way. It’s a shame that this Celebration of Togetherness didn’t contain a more monumental announcement for the game. We have already seen a lot though.

You can check out the new “So Happy Together” trailer below:

Originally, the Celebration of Togetherness was rumored to be announcing crossplay for the upcoming looter shooter. However, Gearbox’s CEO, Randy Pitchford debunked the rumour yesterday, adding that the team want to implement crossplay as soon as possible after launch.

Borderlands 3 is set to support multiplayer in a greater way than ever before. Recently, a host of new ‘Social features’ for the game were detailed, including an Apex Legends-style, Ping System, new matchmaking features, and even a Twitch extension that will allow you to see streamer’s gear and affect their game. All of Borderlands 3 is playable in multiplayer, with the game taking about 35 hours to beat just the main story.

The Borderlands 3 gameplay reveal took place in May after being announced earlier this year. We got the chance to go to the event and get hands-on with Borderlands 3 for the first time. We came away with the impression that Gearbox had made necessary steps to improve the shooting and modernise the gameplay since the Pre-Sequel, which released over half a decade ago. You can read our full impressions here.

What do you think of the new trailer? Are you happy with the reveal or did you want something more? When do you think Borderlands 3 will get crossplay if it ever happens?