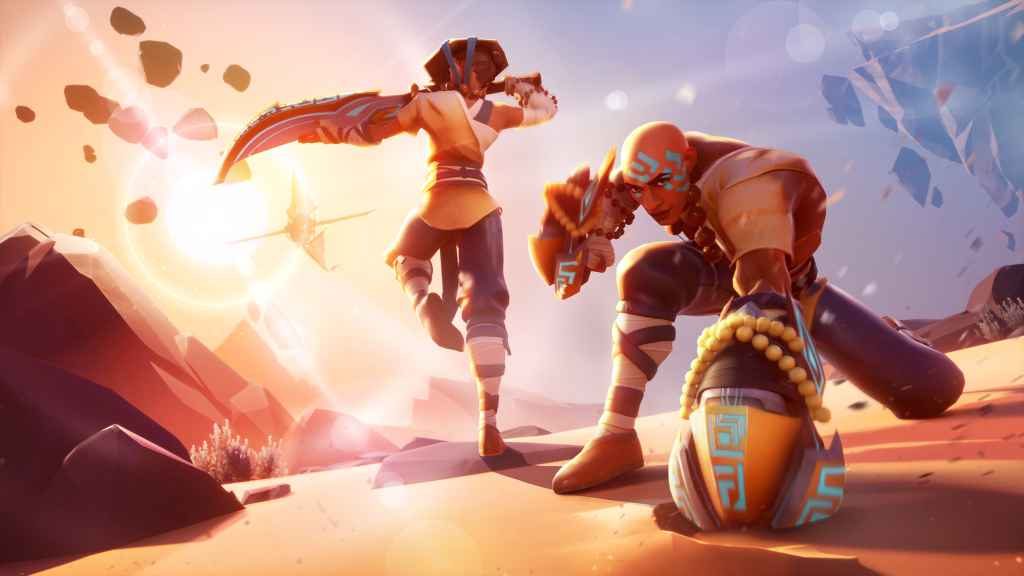 Judging by that headline, one might think that Dauntless had fallen on hard times since its release. Nothing could be further from the truth. Dauntless achieved the six million player mark soon after its console release in May, and by July Phoenix Labs was announcing 10 million players. The game has been on a steady climb since it came out and shows no signs of stopping.

Dauntless is almost certainly my game of the year. Already a smooth and action-packed game upon release (once they got their server woes ironed out), Dauntless has been on the receiving end of steady content updates ever since, with Phoenix Labs regularly plunking down update after update.

I’ve been mostly out of the game since early July, so I decided to check back in to see how things were shaping up after the release of the new 1.0 update. Firing Dauntless up this weekend, I was shocked at how much the Aether Unbound content has changed the game, while still feeling like the Dauntless that I know and love.

The first thing that I noticed – and this is not new as of this patch but was added in a previous update (update 0.9.3) – was the addition of load-outs. Thank. God. Dauntless has seven primary behemoth types – fire, ice, electric, nature, light, dark and neutral – and over time, players develop armor and weapon sets that specialize in dealing with each of these elemental enemy categories.

Before the addition of load-outs, players that were embarking on patrols would be forced to re-spec their entire character almost every time they were waiting for a hunt to begin. Given around 80 seconds, everyone would be frantically negotiating the menus to make sure they were wearing the right stuff, and more than once I have been thrown into battle in less-than-ideal gear.

With load-outs, players can now instantly slide between full gear sets, and the change is immediately noticeable. The wait time to get to battles is cut down considerably, as most players seem to have ponied up for some extra slots. Dauntless supplies everyone with three slots out of the box, and I wasted no time throwing down the cash to get three more. The max number of load-out slots is eight, but six feels pretty good and ought to serve most players well.

From the content released with the new update, the biggest noticeable change is the addition of a new weapon, the Aether Strikers. These weapons bring a new, visceral type of combat to Dauntless, as they fit on your character’s hands like boxing gloves.

I had enough materials in my inventory to throw together a decent, mid-level set of ice Aether Strikers, and I took them for a spin against some lower-level blaze behemoths. After months of hating Embermane, I can’t express how satisfying it was to stand my ground as it charged towards me and just punch this clown right in its big stupid face, laying Embermane out like a delicious violence buffet for my teammates to dine on.

Using basic attacks with the Aether Strikers builds up “Mantras”, which are basically mana for special attacks. These “Techniques” are powerful blows, triggered by either tapping the R1 button or holding it down. It takes a while to get used to firing off the appropriate combos in order to build up your power, but once you have done it a few times it becomes second nature.

New players may want to proceed with caution. Aether Strikers are definitely not starter weapons. They demand that players get very, very up close and personal with behemoths. I imagine that if I weren’t already used to the rhythm of attacking and dodging in Dauntless, I would have had a miserable time going toe to toe with behemoths. But anyone with experience with Dauntless ought to be able to dive right in with the Strikers and have a pretty good time.

Another major change with the new update is the implementation of the new Bounty system – which dramatically changes the way Hunt Passes work.

In the past, players would move through each season fulfilling various timed missions that would earn them points towards their Hunt Pass. More points equals more goodies, so it was advisable to complete those missions as quickly as possible, but if you did, you would have to wait a week for the next set of missions to unlock.

With the new bounty system, players can unlock up to four missions at a time, selecting the missions they want to take on from three randomized options. Every time players indicate that they want to start a bounty, they are given three options to choose from – kill five behemoths with hammers, for example, or do 70,000 part damage on enraged behemoths.

Completing these bounties gives points towards your Hunt Pass, and the great part is, you can just start a new bounty immediately. This allows more aggressive players to proceed at their own pace, without having to wait for Hunt Pass missions to reset.

The bounties presented to choose from still push players to get outside their comfort zone. You won’t see four bounties at once asking you to defeat behemoths with your weapon of choice. But being able to reset bounties once you’ve completed them is a game changer.

I did manage to beat the new behemoth – a remix of an existing electric beast. I haven’t had time yet to dig into Trials, which were added into Dauntless a few months ago, allowing players to take on customized, more difficult Behemoths. So there are still leader boards to contend with, and an entire separate set of rewards to browse through that I haven’t even looked at yet.

Safe to say, Dauntless has sucked me in yet again (probably the fourth or fifth time, at this point, if you include all of the PC betas). I am astounded at Phoenix Labs’ ability to continue pushing their already cool game in different direction, creating new and exciting ways to engage with the basic act of killing monsters.

If you have yet to jump into Dauntless, now is a great time. This game has a great history already, and I can’t help but feel that the best is yet to come. All of the release-related issues have been resolved, and the experience is smooth and reliable. I simply can’t say enough good things about this game. Dauntless is the very best free-to-play game on the market. Believe it.