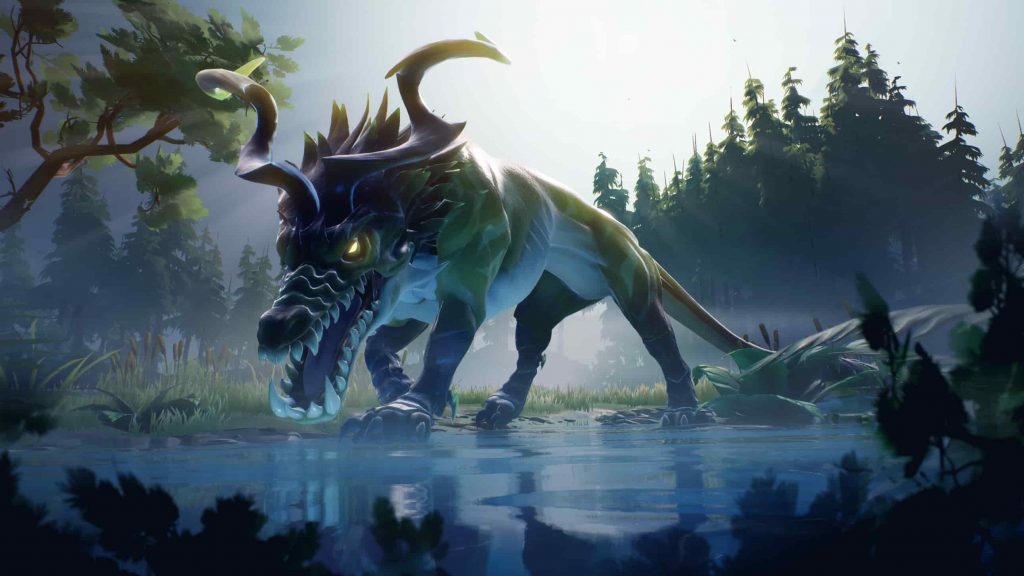 Note: PSU is posting this review several weeks after Dauntless’ release. We wanted the chance to review the game in its final state, after the typical launch day server woes had been resolved.

Cutting through a crowded field with stunning originality, Phoenix Lab’s Dauntless is an object lesson in how to do free-to-play correctly. Further, by taking the monster hunting genre and creating a viable free-to-play title, Phoenix blows the doors off of which genres can be successful in the free-to-play space.

No longer the gem-matching, MMO shooter slum that they once were, Dauntless shows that free-to-play games can produce games of surprising quality and longevity, with real gameplay loops that brings players back for legitimate fun as opposed to a loot-box endorphin rush.

What Is Dauntless, And Why Should I Care?

Dauntless has a simple gameplay loop, but once it gets its hooks in you, you will be hard-pressed to stop playing. Players are based in the hub city of Ramsgate (which must have thousands of instances running at a time, because there never seem to be more than fifteen people running around). Ramsgate is small and navigable, the home to trainers, tradesmen, and quest givers. There isn’t much to do in Ramsgate besides turn in quests and manage your gear, but hanging in a hub city is hardly the point of Dauntless.

The real action takes place on The Shattered Isles, a series of floating islands. The Shattered Isles are home to any number of element-based Behemoths, and the quest lines you receive in Ramsgate will send you out to hunt them repeatedly.

Dauntless is not the sort of game that has you hunting a Behemoth one time. In order to really progress and succeed, you will need to face these dire beasts over and over again, and learning their patterns and attacks is part of the fun. Combat is fast, fun, and in the later game, challenging. Killing Behemoths grants the player materials, which can then be used to craft better gear. Better gear leads to fighting more difficult Behemoths. Rinse and repeat.

Multiplayer: Embrace It, Love It

In the opening hours of the game, you will be able to handle hunts singlehandedly, but before long Dauntless will start handing you your rear on a platter unless you come to terms with the multiplayer aspects of the game. Dauntless is absolutely meant to be a multiplayer game, to the point where playing by yourself is beyond non-optimal; it becomes completely non-viable.

Luckily, Phoenix Labs has put considerable effort into their matchmaking system. Finding a desired hunt usually takes less than two minutes, and now that the launch week server problems have settled, you will usually find yourself on an appropriate team of four in less than sixty seconds.

The much-touted cross-platform matchmaking is almost invisible in-game, the only visual indication that you might be playing with folks on other platforms being a small symbol near players names during hunts. This is absolutely how it should be.

Team chat is robust and works well, but is mostly unnecessary. Chat can easily be toggled off if you don’t feel like hanging out with strangers. The game is laid out well enough that you easily fall into your role regardless of whether you are talking or not.

Teamwork is a shifting dynamic, depending on the weapons brought by each player. There are six basic weapon types in Dauntless, each with their own strengths and weaknesses. A team of four taking on an Embermane with swords will handle the battle far differently from a team of hammer users. The best you can hope for is a well-rounded team, with a variety of weapons.

Your reliance on your teammates will depend entirely on your experience level with a particular Behemoth. Each player has a number of heals that can be used during the battle, but once they are gone, you are at the mercy of your teammates to revive you. Luckily, the community is very cooperative at this point, and it is in everyone’s best interest to keep the entire team on their feet. Of course, once you are accustomed to a Behemoth, you are much less likely to get hit, let alone get knocked out.

Experiment With Weapons And Armor

I started Dauntless as a devoted Chain Blade user, enjoying the mix of lightning fast close-range severing DPS damage and slower distance attacks. But after a bit of experimentation, I have switched over to the Ostean Repeaters – Dauntless’ somewhat unpopular guns. I’ve found that with some practice, I can wield them to moderate success.

Weapons and armor are constructed from materials picked up as loot after hunts. Once constructed, they can be upgraded extensively, though the recipe requirements to do so become more demanding as you upgrade into higher levels.

As equipment is crafted from monster parts, it is imbued with the attributes of that monster type. For example, fire armor is best against fire monsters. However, you would not want to use fire weapons against a fire monster, needing instead to bring ice-based weapons. A handy in-game chart lays all of this out for the player, reminding them before each hunt what the optimal load-out should look like.

Players can also craft a variety of lanterns, which offer different Behemoth-based in-battle powers. And each item of weaponry and armor can be enhanced with cells – perks that are bestowed on players as part of the new Mastery system. Dauntless tracks almost everything you do, from damage done per weapon to the sort of performance you are putting up against various Behemoths and rewards you as you pass certain checkpoints.

Worried About Free-To-Play? Don’t Be

As there is no PVP component to Dauntless, nothing in the monetization model could be remotely considered “pay-to-win”. This is a co-op game, and most of the options available for purchase have to do with either cosmetics or gaining materials a little faster. Cosmetic options are the simplest to explain. For five bucks you can pick up a Timely Arrival Pass, which gets you a limited-edition transmog costume, a few perk cells, and a pile of platinum.

Platinum can be used to buy cosmetic items ala carte – dyes for your armor, unique emotes, stuff like that – or if you are wise, you can invest it in a season Battle Pass, which lets you earn many, many more cosmetic items simply for playing the game. You also get bonus materials at the end of a battle – not a ton, but enough to make it worth the investment.

The Battle Pass is definitely the way to go if you want to support Dauntless and toss the devs some cash. Judging by the number of players running around in the Timely Arrival ninja costume, there are a LOT of people that don’t mind chipping in five bucks on this game. There are more expensive options available for those that want to invest further, and you can just buy platinum outright if you are so inclined.

But the bottom line with monetization is that it adds some fun options to lay an entire extra system of rewards over the entire game. However, Dauntless feels like a full game without every bothering with any of this, and outside of a menu that pops up upon log-in, Phoenix Labs does very little to disturb players with sales pitches.

But Is Dauntless Fun?

Oh yes. Dauntless is fun as hell. Ridiculously fun. I absolutely love it. The actual hunting action is fast and furious, and the Behemoth design is superb. The animation is top shelf, and all of window dressing is slick and professional.

Phoenix Labs has taken the monster-hunting genre, and sanded it down to a shiny Blizzard-like finish, full of pastel landscapes, whirling martial arts and whiz-bang special effects. The loop of “kill monster -get loot- craft gear – kill bigger monster” has always been fun, but rarely has it been as accessible and navigable as in Dauntless.

This is a game that is constantly bubbling around in the back of my brain, urging to knock my kids off of Netflix so I can jump in for one more battle. Dauntless gnaws at my mind while I am at work, whispering at me to get home so I can complete that new set of armor I’m working on. This is the sort of game that has me creating spreadsheets so I can cross-reference my quests for optimal performance. Dauntless is highly, highly engaging.

You will note that this review doesn’t contain the word “however” (as in “however, a few small issues keep Dauntless from blah, blah, blah”). I frankly don’t have anything bad to say about this game. Sure, the servers were all clogged up at launch, but when aren’t servers a wreck on launch day? Phoenix Labs was totally transparent on the issues they were having and kept gamers in the loop about when they could expect fixes.

Like I said at the beginning of this review, Dauntless is free-to-play done right. Take a damn fun game, polish it up so it is super shiny, then add on some fun cosmetic stuff for sale – and make it fun to earn. There is absolutely no reason not to check out Dauntless. It is superb, it is free, it is amazing.

Dauntless is out now on PS4.

Early access to Dauntless kindly supplied by the publisher.

If you’re already playing Dauntless, you can check out our Dauntless guides below!

Dauntless comes bursting out of early access with one of the best, most original, and most polished games in the free-to-play space. With tons of content, amazing battles, a great matchmaking system, and endless room to grow, Dauntless is going to be around for a long, long time. Beyond highly recommended, Dauntless is compulsory, obligatory, required gaming.