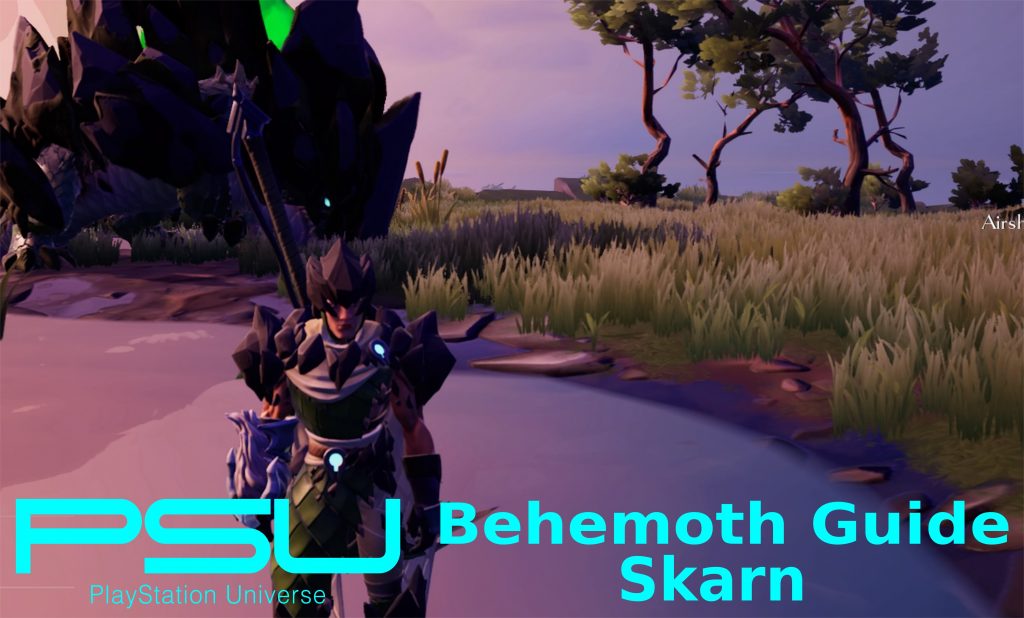 Dauntless Behemoth Guide – Skarn. Here we go then, we have now left the early game and started to get to the meat and potatoes of it all. We have left the ‘lesser’ behemoths behind and Skarn will probably be your first real test. He has killed numerous hunters, possesses powerful attacks and has a thick hide of rock to protect him from attacks.

Skarn is a reptilian behemoth who can manipulate terra ether and uses it regularly to his advantage. He is a big lumbering brute who must be taken very seriously. I have been on many quests where players have not been prepared to face Skarn or have taken him too likely. Many have died and hopefully, with the help of this guide, we can vanquish him and get some good gear in the process.

Skarn is a big beast who will be the first test of your abilities you have learned so far. His protective armour plating must be broken in order to do some real damage. Blunt damage is your friend in this fight and will make breaking his armour easier. Bring terra armour and a shock weapon if you have them to shave some vital time off this bout.

Skarn’s moves are mostly telegraphed and quite slow, so with practice, you should have no issues taking him down. He has a massive vortex move which should be avoided at all costs, I will explain his moveset below and hopefully, with the help of this guide, you will be felling this beast in no time.

Rock Vortex: This is Skarns signature move. Once you see Skarn start attracting rocks to his body move away. If you get trapped he will take several chunks out of your health. It’s better to just run when you see the move telegraphed. If you do get caught continuously roll away until your stamina is depleted and you can also use your lanterns shield, these two combined should minimize the damage you receive.

Forward Slide: Skarn will tilt his head slightly, signalling he will slide forward. Its an easy move to avoid and does give you plenty of opportunity to attack. If you happen to be in front of Skarn at the time just evade to the left or right and spin round. Then you can follow his slide and get some damage in.

Rock Slide: This move is massively telegraphed. Skarn will shoot his armour off and attract it back again. Just make sure you are out of the way of the slide and you can unload a lot of attacks for some free damage. Again, if you are in the way just evade left or right at the right time and turn around to get some hits in.

Spike Slam: Skarn will rear up on his hind legs telegraphing this move. He will then slam down either once or twice, When he slams out he can fire an underground spike that has homing properties towards your hunter. When he rears up, get a few attacks in then evade away when he slams down. If one of the underground spikes comes for you just evade as it gets under your body. Its an easy move to spot and avoid.

Rock and Roll: Skarn will roll towards you on his side. The good thing about this move is he discards all his armour plating, this is a good time to get some attacks in as he has very little defence. The move should be treated pretty much the same as the Rock Slide, evade and follow in for big damage.

Enraged Mode: Skarn will get enraged and huddle into a ball, hiding behind his armour plating and negating a lot of damage you inflict. He will fire off armour plating at hunters at regular intervals and even use some of the moves listed above during this phase. This part of the battle is just about doing as much damage as possible to get him out of enraged mode and return to the normal battle phases.

You can receive various resources for breaking parts of the Behemoth. Heres what you get from Skarn. You cannot chop his tail but you can break his armour, multiple times.

Skarn has various weapons to craft with your well-earned resources. Here is what you can craft and what’s required to craft them. These weapons also have a unique ability as well as an elemental power bonus.

Skarn has various armour pieces to craft with your well-earned resources. Here is what you can craft and what’s required to craft them. Also, now we can start creating new lanterns from the behemoths. They give different skills and stats compared to your starting lantern.

Well, that’s about it for the Skarn. Now get out there, slay the beast and make some quality gear out of it. Happy hunting!

Oh and don’t forget, the One Dauntless initiative which enables crossplay with Xbox One and PC players is also live now too.