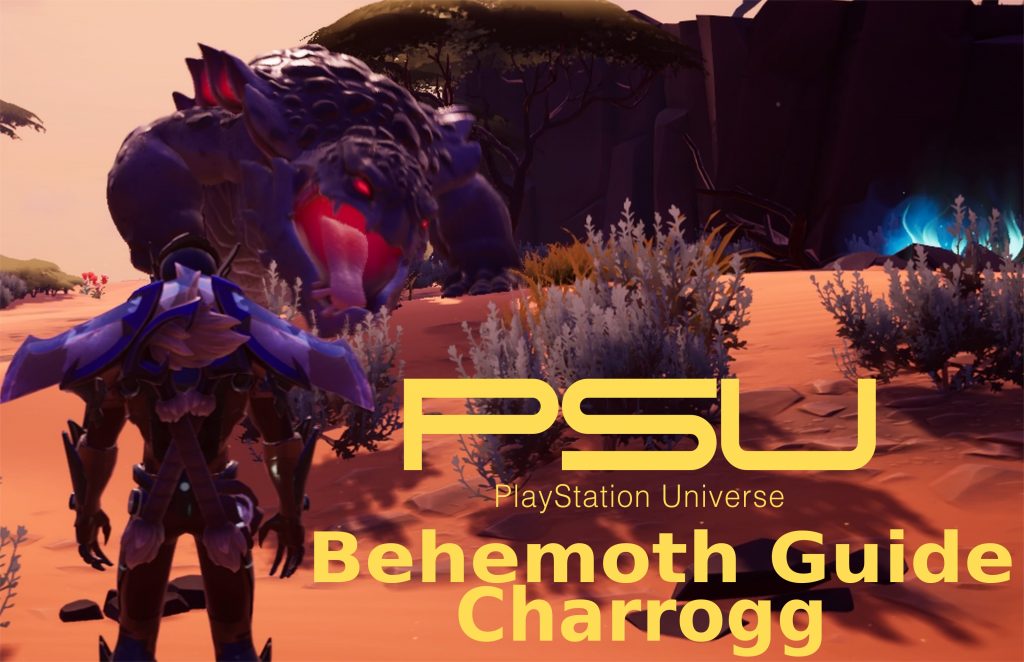 Dauntless Behemoth Guide – Charrogg. Known as the walking Aether Furnace, Charrogg has fed on blaze energy for years and is not to be trifled with. He has a tough armoured hide and can set the immediate area ablaze with his volcanic attacks. In addition, Charrogg can fire jets of flames in all directions and will turn unprepared Slayers to ash.

While slow and pondering, Charrogg more than makes up for it with his projectile attacks. Not only do you have to keep an eye on the behemoth itself, but the ground around him too. When the ground sets on fire you must avoid it as the flames will spread to you too. As such, this battle is not only against the beast but also tests your positioning and avoidance skills as well.

Charrogg seems intimidating at first. However, there’s no cause to worry; with the help of this guide, you will be slaying him in no time. Firstly, stay close to him, evade most of his volcanic attacks and get that damage piled in. Frost weapons and flame armour will help immensely, as will breaking his firesacs. Breaking these will cut the number of streams firing lava in his lava stream move and help you greatly. Keep aware of your surroundings at all times as the floor will be covered in lava a lot and can cause you some headaches.

Lava Ball: Charrogg will tilt his head to one side signalling this move is on its way. He will spew a lava ball out that has slight homing properties. It’s easy to avoid; just evade or circumvent it completely, as it does leave with a big window to attack Charrogg.

Air Sniff: A rare move that allows the slayers to get a lot of damage in. Charrogg will sniff the air looking for Hunters, so get your long combos in and pile on that damage. He will not attack so you are completely safe.

Lava Tail Rain: Charrogg will arch his back and flick lava into the air from his tail. It’s an easy move to spot, and while the lava is in the air you have plenty of time to get some hits in. Just watch where the lava is landing and avoid it as necessary.

Lava Eruption: Charrogg will raise his body with his mouth open. This is the sign for the lava eruption. The best place to position yourself is right up close, so get in there and do some serious damage. The lava eruption does not land near his body so you are free to attack.

Stomp: Charrogg will lift a front leg and slam it down. It’s easy to spot, so just evade and follow in for a few free hits.

Charge: Charrogg will dip his head letting you know that the charge move is coming. Just evade left or right and follow him forward and attack. You will have a small opportunity to attack, even more so if he targets another slayer instead of you.

Lava Blast: Another AOE move, Charrogg will telegraph this attack by slamming down slightly on the ground. You can evade through the fireballs if you time it perfectly, otherwise, just move through the middle of them and attack at will.

Tail Swipe: This move is telegraphed by Charrogg moving his tail to one side. You can evade straight through it if you time it correctly. Otherwise, just move around with it and get some attacks in.

Claw Swipe: Charrogg will lift a leg and swipe at you, and so long as you’re not too close this move is rarely an issue. Successfully evade it and move in for a few free hits.

Lava Streams: Charrogg will spin and fire four streams of lava out from his body. He will rotate and fire lava for a period of time. Either follow him around between the streams or just attack in between them. You can also break Charrogg’s firesacs, which will stop the streams from firing from that point. As such, it’s definitely worthwhile trying to break them to help deal with this attack.

You can receive various resources for breaking parts of the Behemoth. Heres what you get from Charrogg.

Charrogg has various weapons to craft with your well-earned resources. Here is what you can craft and what’s required to craft them. These weapons also have a unique ability attached to them.

Charrogg has various armour pieces to craft with your well-earned resources. Here is what you can craft and what’s required to craft them. Again, Shike also has a lantern to craft. They give different skills and stats compared to your starting lantern, depending on which one you have equipped.

Well, that’s about it for the Charrogg. Now get out there, slay the beast and make some quality gear out of it. Happy hunting!

Oh, and don’t forget that the One Dauntless initiative, which enables crossplay with Xbox One and PC players, is also now live.