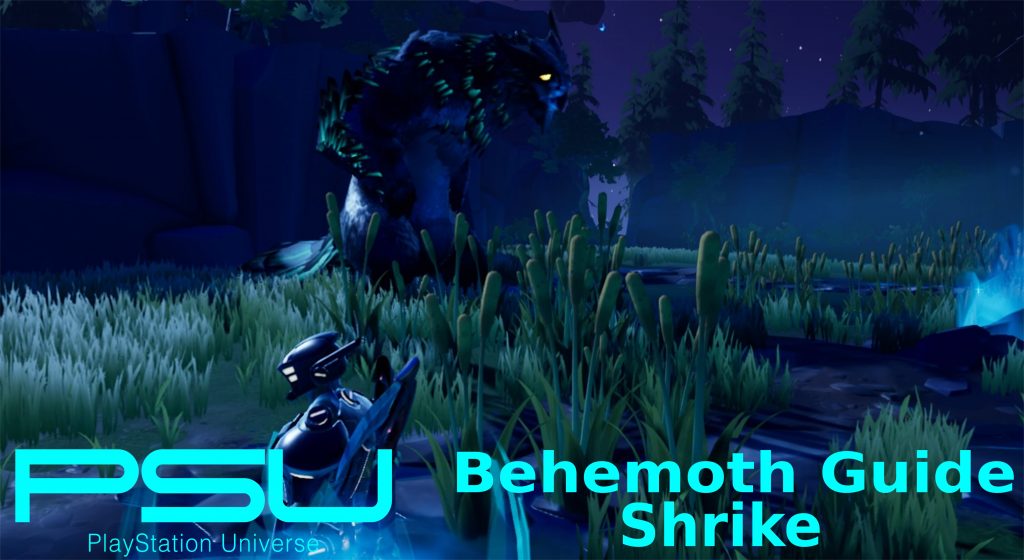 Dauntless Behemoth Guide – Shrike. Known as the winged terror, Shrike will pose the unaware hunter some serious issues. Probably your first flying behemoth, Shrike is fast, powerful and can fire projectiles at you very quickly. He uses Raw Ether to create localized vortexes and manipulate the air to his advantage. Shrike slams down from the sky, has claws that can do some serious damage and attacks very quickly. You must always be on your toes to not go home empty-handed from this battle. This guide will help you fell this feathered foe.

Shrike is a different kind of fight to what you have faced so far. He will spend a lot of time in the air, especially when enraged. Luckily, a well-timed heavy attack will bring him out of the sky. Use this to your advantage and you can trim quite a bit of time off this battle.

Having no real weaknesses and no element means you should just bring your highest defence armour and highest attack weapon. Bring any skills that fit your build and just chip away at his health pool when you can. Read his moves, attack accordingly and hopefully with the help of the move guide below you will take him down.

Body Slam: Shrike will twirl up in the air to let you know that he is prepping this move. He will then slam down on you doing quite a bit of damage. If he comes for you either run in the opposite direction or if you can time it well enough, an evade left or right will dodge his smash. After you will be able to get in a few attacks, depending on how close you are.

Air Blade: This is Shrikes long range attack. Its telegraphed heavily, when you see his claw charge up and glow you know it’s on its way. The move is easily dodgeable, just evade to the left or right and then charge in and get some damage in. If he shoots another hunter then you are free to attack.

Charge: Shrike will charge in a straight line towards one of the hunters. Evade to the left, right or even just reposition yourself out of the way to counter it. At the end of his charge he normally either does an Air Blade attack or an Air Charge attack. Counter either accordingly, both are covered in this guide.

Claw Swipe: Shrike will swipe with his claws twice in succession, have a very small pause and repeat. All you have to do is keep a small distance away until the fourth swipe and then attack at will. As always if he is attacking another player, go to town on him and unleash your biggest combos.

Scream: You don’t get this move very often but when you do its a great opportunity to unleash your biggest attacks and longest combos. Use your specials and give this oversized owl a good thrashing. You will not be attacked and it’s just a small window to do some free damage.

Whirlwind: Shrike will telegraph this move by jumping up and backwards. As soon as he does this evade out of the way as a whirlwind will be heading in your direction. Usually, you will be too far away to counter it unless he is attacking someone else. Use this time to reposition and prepare for the next attack.

Glance Around: Another rare occurrence, Shrike will look around as if lost and not attack. This is another free attack phase, get in there and do some serious damage.

Air Charge: Shrike will charge at you in the air. As I stated earlier, a well-timed heavy attack will bring him down. This will allow you to get in loads of free damage while he is recovering, otherwise, just avoid and prepare for the next attack.

Enraged Mode: Shrike will get on all fours, this is your cue to evade away from him as he will explode. When enraged he will spend a lot of time in the air so as stated earlier a well times heavy attack is your friend here. Not only will that ground the beast but it gives you a long window to attack while he is recovering. Also while enraged Shrike will do two Air Blades instead of one so be wary of that.

You can receive various resources for breaking parts of the Behemoth. Heres what you get from Shrike.

Shrike has various weapons to craft with your well-earned resources. Here is what you can craft and what’s required to craft them. These weapons also have a unique ability attached to them.

Flight of the Shrike/100/None/Conditioning/Technique and Mobility/Rams (x150), Torn Strikefeather (x3), Shrike Tailfeather (x1)/After a dodge gain 50 part damage on your next strike

Scream of the Shrike/100/None/Conditioning/Technique and Mobility/Rams (x150), Torn Strikefeather (x3), Razor Beak (x1)/After a dodge gain 50 part damage on your next strike

Shrike has various armour pieces to craft with your well-earned resources. Here is what you can craft and what’s required to craft them. Again, Shike also has a lantern to craft. They give different skills and stats compared to your starting lantern, depending on which one you have equipped.

Strikes Seal/-/Technique/Faster movement speed for 6 seconds, Hold L1 for an aura that gives everyone who enters 15% more movement speed and attack speed for 15 seconds/-/200/Torn Strikefeather (x1)

Well, that’s about it for the Shrike. Now get out there, slay the beast and make some quality gear out of it. Happy hunting!

Oh and don’t forget, the One Dauntless initiative which enables crossplay with Xbox One and PC players is also live now too.