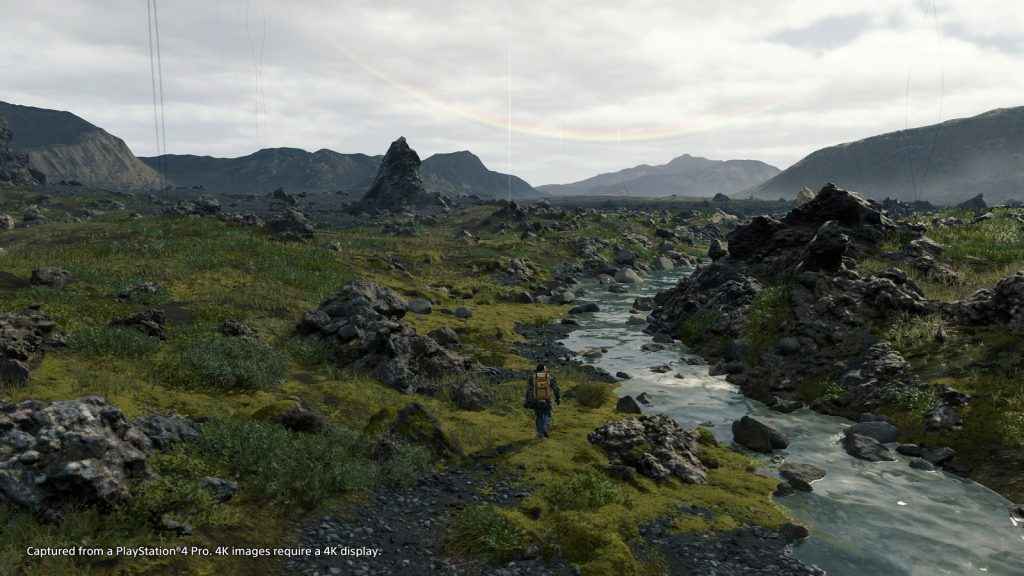 With the exception of Metal Gear Rising: Revengeance, I've played every Metal Gear Solid game since the original released on PlayStation back in 1998 - but I'd be lying if I said I understood perfectly everything that happened over the course of the series. And, based on what we saw during the Death Stranding E3 presentation, Hideo Kojima's made sure it won't be any easier in his latest title.

Nonetheless, there was plenty of information to pick through during its time on stage during the PlayStation showcase, even if the metaphorical implications and thematic importance remains frustratingly out of reach at this stage. Despite the lack of official confirmation at the time of writing, the beautifully overcast and mountainous terrain showcased during the Death Stranding E3 presentation strongly suggests those who advocated an Icelandic setting based on Kojima's Moss-themed Tweet of a few weeks back, were correct.

It was easily one of the most picturesque trailers exhibited during the show, with plenty to keep the amateur video game photographers busy. However, it appears we won't be spending all our time trekking across evocative volcanic landscapes in Death Stranding.

A brief scene towards the end of the video revealed protagonist Sam in the middle of what looked like a dilapidated shopping centre or train station, perhaps in search of precious resources? That's usually the reason post-apocalyptic protagonists go crawling through structurally unsafe ruins. To be frank, though I've watched the trailer a few times now, I still have no idea what's going on.

Sam is a courier of some description, that's for sure, and he prefers to work alone as demonstrated by his refusal to work for an unnamed female character at the beginning of the trailer. But just what are the goods he's tasked with transporting? Does he collect them from ruins, like I suggested above or are they other people's belongings? Who does he deliver them to? And why? With so little to go on, it's difficult to say.

That being said, the trailer does reveal what I can only assume are some of the game's main enemies: vaguely humanoid creatures who seemingly hunt using their sense of sound and smell, and are only visible to Sam when he activates a strange flower-shaped attachment located on the left shoulder of his exosuit. Whatever they are, they're clearly dangerous; so much so Sam's willing to risk the life-sapping effects of ‘Timefall' to avoid being “eaten” by them.

Timefall, too, received a bit of clarification during the trailer. A special form of rain that “fast forwards” (i.e., ages) anything it comes into contact with, Timefall is the reason Sam is forced to wear an exosuit whenever he travels in the open air. Although the fact he views it as less of a threat than the mysterious invisible creatures mentioned above suggests there are ways of dealing with it. Indeed, the portable incubator Sam hooks into before he plunges headlong into the storm appears to afford some level of protection; my theory is that it enables Sam to literally siphon youth itself from the embryo contained within. If such a concept existed in the game world, it would also help to explain why Léa Seydoux's character ingests a ‘Cryptobiote' (a tiny, multi-limbed zygote) in the final few moments of the trailer.

I've basically covered all this in the preceding points, but a quick recap can't hurt.

The Walking Dead's Norman Reedus plays the part of protagonist Sam Bridges, a courier responsible for transporting a variety of goods (including a human body, it would seem) across the fjords of Iceland, who relies on a futuristic exosuit to protect him from the hazardous environment. Despite these precautions, however, Sam is afflicted with the “extinction factor”. Now, it's never explained exactly what that is, but it sounds like a particularly virulent strain of the pandemic that caused society's collapse.

Along with Sam, we were introduced to French actress and most recent Bond-girl Léa Seydoux's character: an unnamed, proto-foetus-consuming woman with a penchant for impractical umbrellas. While Lindsay Wagner (the Bionic Woman, no less) fills the role of another as-yet-to-be-revealed character who, it appears, has some sort of pre-existing relationship with Sam. There wasn't an awful lot of action on display during the 8-minute presentation, truth be told, let alone any sign of uber stylish Danish actor Mads Mikkelsen who, it has already been revealed, will be playing the part of the game's villain.

The closest thing to enemies were the invisible creatures I've mentioned a few times now, and even then, Sam did everything he could to avoid them. Whether or not they represent the same kind of omnipotent, immortal threat as Resi 7's Jack Baker or Alien: Isolation's Xenomorph I wouldn't like to say at this stage, but seeing as how Death Stranding is supposed to be an action game, I think it's safe to say there will be some foes present with whom we'll be able to deal with in a more direct manner.

At various points during the presentation, we saw Sam burdened with countless packages; the majority tethered precariously to his back while a few of the smaller ones were left in the care of a diminutive, box-shaped drone.

Sam's ability to cross rocky terrain and climb steep hillsides seemed to be noticeably affected by his heavy load, forcing him to make use of both his hands and feet to navigate the trickier sections, and giving a real sense of weight and exertion to his movements that I found really interesting. Particularly as it looks like there might be some light environmental puzzles to contend with: creating makeshift bridges over deadly chasms, scaling sheer cliff faces using climbing ropes - that kind of thing.

The HUD, assuming there is one in the traditional sense, was non-existent during the trailer, so at this stage, it's hard to tell how these systems and mechanics will be displayed/accessed in-game.

Phew, that's a lot to process.

Fortunately, if that's the right word in this case, we're still some way off launch day. Even if Death Stranding does end up releasing this year (which I doubt) it won't be for a good few months yet.