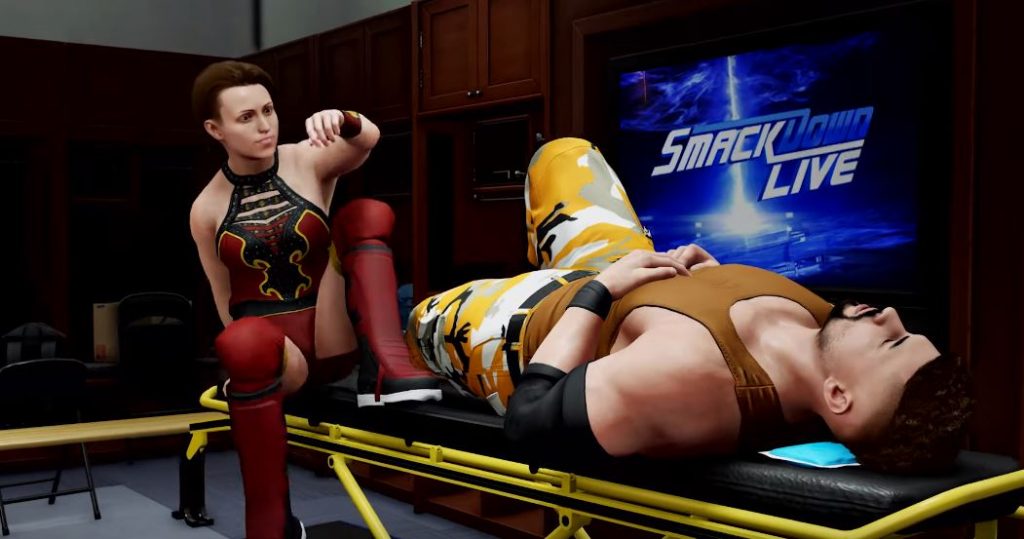 For the first time ever in a WWE 2K game, 2K and developer Visual Concepts have confirmed that players will be able to able to take both make and female MyPLAYER characters into a full-blown MyCAREER campaign storyline in WWE 2K20

Boasting well over 20 hours of gameplay, masses of recorded dialogue, motion captured cutscenes and challenges to accomplish, WWE 2K20’s MyCAREER mode looks to stand shoulder to shoulder with the 2K Showcase mode that WWE 2K20 will have when it releases on October 22, 2019.

Take a look at the full MyCAREER press release and trailer below.

WWE 2K19’s MyCAREER upped the ante with a more narrative driven storyline and fully voiced cut scenes featuring WWE Superstars. WWE 2K20 takes all of that to the next level with a dual male and female MyPLAYER storyline offering a much longer intriguing experience.

IT ALL STARTS AT THE WWE HALL OF FAME

WWE 2K20’s MyCAREER tells the story of Red and Tre, two lifelong best friends who set out to fulfil their dreams together in WWE. This approximately 20-hour experience takes place in the near future on the day of Red and Tre’s WWE Hall of Fame induction. Through reminiscing with WWE Superstars and Legends and the stories they tell during their Hall of Fame speech, Red and Tre flashback to their high school years, first matches, struggles to work their way up on the indies, breaking into NXT, and finally the journey to the top of WWE as they attempt to achieve Hall of Fame-worthy careers.

MyCAREER AT A GLANCE

· For the first time ever, create both a female and male MyPLAYER and take them through MyCAREER, playing storylines and matches as each character and occasionally teaming together with the all-new Mixed Tag match feature.

· At one point, Red and Tre cross through an interdimensional portal to try to find the Undertaker who hasn’t been seen in years, encountering various surprises along the way.

· Track Red and Tre’s career progress with “The List” – as teenagers Red and Tre write down all the goals they’d like to someday achieve, which later becomes their road map to success. Can you cross off their final list item and get inducted into the WWE Hall of Fame?

· At certain points in MyCAREER, the decisions you make affect the matches Red and Tre compete in, who they team with, and possibly even lead to some alternate outcomes. Explore different choices to see what paths they might lead you down.

· Podcasts are back this year, including “The Buzz and Cole Show” featuring the return of Buzz and Cole Quinn from WWE2K19’s MyCAREER.

· Around 20 hours of total play-through time