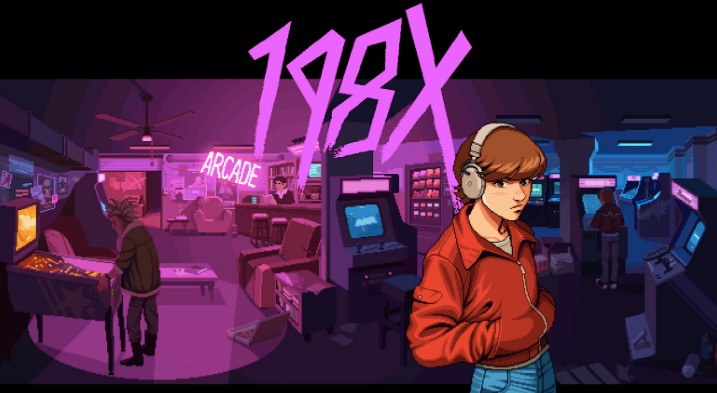 198X is absolutely nothing short of a highly concentrated shot of nostalgia – one that immediately rushes to the brain in the hope of overwhelming rationality and reason with the rose-tinted opiate of an era seemingly long since bygone.

And yet, you don’t need to spend very long at all with 198X to realise that while it oozes nostalgia from every digital pour, it equally extols the eternal virtues of video games as a domain of genuine escapism, and one that for many of us has been an integral part of our hop, skip and jump from adolescence to adulthood.

Though the most recent trailer for 198X strongly sells itself on account of the five retro games that are encompassed within it (a sensible tactic given the visual attraction they each boast), 198X is actually a coming of age story that uses the games, often in an analogous capacity, to link up and reflect various aspects of the monologued story.

As a wayward teenager who is both looking to the past to leave behind a troubled childhood, and looking ahead at an uncertain, bleak future as an adult, 198X meditates on being rooted to a city and how outcasts strive to find a place to make their own. More than that, it’s about the notion of ultimate escapism, and while the whole idea that another life is just one credit away is romantic and also equally a touch dramatic, it’s one that ultimately rings true. After all, how often have we found ourselves happily torn from the doldrums of our daily lives by just putting a quarter into an arcade machine, or simply picking up the controller at home?

It’s also keenly about how video games can give the unconfident confidence – with every move mastered, every track beaten and every enemy destroyed providing some sort of incremental dollop of self-worth that can then be taken and parlayed into the real world. It’s about escaping labels, resisting lazy definitions and placing video games upon a pedestal of worship; embracing the outcast culture that for so long was part of the hobby in its earliest days and nothing of the ugliness that some extreme parts of its fandom have contemporarily rendered upon it.

It’s an evocative tale for sure, and even if the emotional resonance is not as keenly felt by those who cannot directly rate to 198X’s parable, it’s framed in such a stylish fashion with some wonderfully expressive pixel art and heartfelt voice work, that you cannot help but be drawn in by it all anyway.

As mentioned previously, arguably the most outwardly attractive part of 198X is that it contains five games that are generously inspired by the gaming classics of yesteryear. Be prepared though, each of these ‘games’ is little more than 10-15 minutes long, and while 198X can be beaten in just over an hour and 30 minutes with little reason to return other than trophy hunting, 198X’s duration is arguably reflected in its sub-budget price, so it’s difficult to feel ripped off.

When it comes to the first of these games, Beating Heart is a riff on the side scrolling brawlers of yore, such as Final Fight and Streets of Rage. The animation is super fluid and laying waste to the numerous 80s themed goons feels appropriately satisfying with highly responsive and tactile controls. That said, some of the collision detection can seem off – an enemy can, for example, do a rushing uppercut that still hits you even if you’re not directly in front of them.

Into The Void meanwhile is a take on side-scrolling shooters, invoking fond memories of Sega’s Thunder Force series or R-Type, while The Runaway feels like a delectable amalgam of pressure cooker arcade racers such as Chase HQ and Outrun. Shadowplay meanwhile, absorbs the aesthetic of the classic Shinobi and Shadow Dancer games of old, but reimagines them as an auto-running platform slasher instead. Sadly, the jumping simply feels a touch too unresponsive, which means that the instant death afforded by numerous spikes and pits happens much more frequently than it should.

Of all the morsels of retro goodness on offer here, the final one, Kill Screen, is arguably the weakest. A 3D adventure maze effort with a frustrating reliance on trial and error mechanics that borders on the maddening, Kill Screen is also the most on the nose when it comes to the analogies, with the player constantly being taunted by parental insults and nagging proclamations as interpreted by an old-school style AI.

What’s also clear is that developer/publisher Hi-Bit Studios is inspired by more than just video games, too. In Shadowplay for instance, a massive masked, black sludge like creature appears later on and immediately evokes memories of No-Face, the melancholy monster from Hayao Miyazaki’s animated opus Spirited Away. Elsewhere, a visually ornate shot of tram lines swaying in the wind during one cutscene feels like it was inspired Hideaki Anno’s Neon Genesis Evangelion, though certainly there is no shame in drawing inspiration from one of the greatest anime television shows ever made.

While 198X feels like an adoring homage to the games and gaming culture of yesteryear by a bunch of hugely talented fans, it also feels akin to something like an interactive portfolio – a brash display of skill and artistic knowhow to let you know that if they wanted to, the devs could easily spin out each of these mini-retro love letters into fully fledged efforts of their own. Which brings us to the future – 198X is envisioned as the first in a multi-part series of games, the first having been brought to life by nearly some 2,000 backers on Kickstarter, and the fate of future efforts likely hanging off the critical performance of this first instalment.

From an audiovisual presentation standpoint 198X comes across as a feverish love letter written by not just adorers of the late 80s gaming scene, but those who have lived, smelled and tasted it. The audio side of things in 198X finds itself equal to the task of matching the high caliber visuals too, with a superb soundtrack that invokes the era perfectly – composed in part by the legendary Yuzo Koshiro of Streets of Rage fame no less.

198X doesn’t just trade on nostalgia, it ruthlessly weaponises it; creating a full-fat, full-sugar, devil may care offering that for just a shade over 90 minutes whisks you back to a different time, a simpler time. 198X isn’t just a celebration of those games from the past, it’s an emotional parade for the social scene and rebellious mentality that surrounded it, too. Of course your milage may vary – and while you should feel free to deduct a point or so from the score below based on your inclination toward nostalgia, I personally can’t wait for my next fix.

A fascinating if overly lean meditation on the video game scene of old, 198X is a compressed, weaponised dose of nostalgia that deserves to be experienced by anyone whom professes a love for this greatest of hobbies.