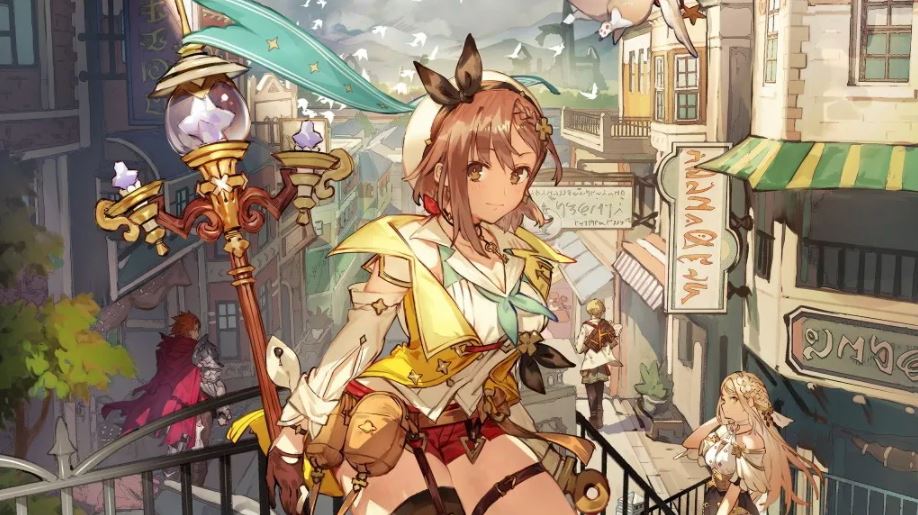 A Great Cast of Characters Brimming With Personality

Atelier Ryza 2 takes place three years after the events of Ever Darkness & the Secret Hideout. Ryza has set off to the Royal Capitol: Ashra-am Baird to solve the origin of a mysterious egg-shaped gem. While in the capital, Ryza quickly runs into her old friend Tao, an academic at the capitol studying the mysterious ruins located around its vicinity.

As always, Ryza’s adventuring urge takes over, and she sets off with Tao along with some new and old friends to explore the ruins and find out the mystery of the gem she now possesses, running into more of her friends along the way. 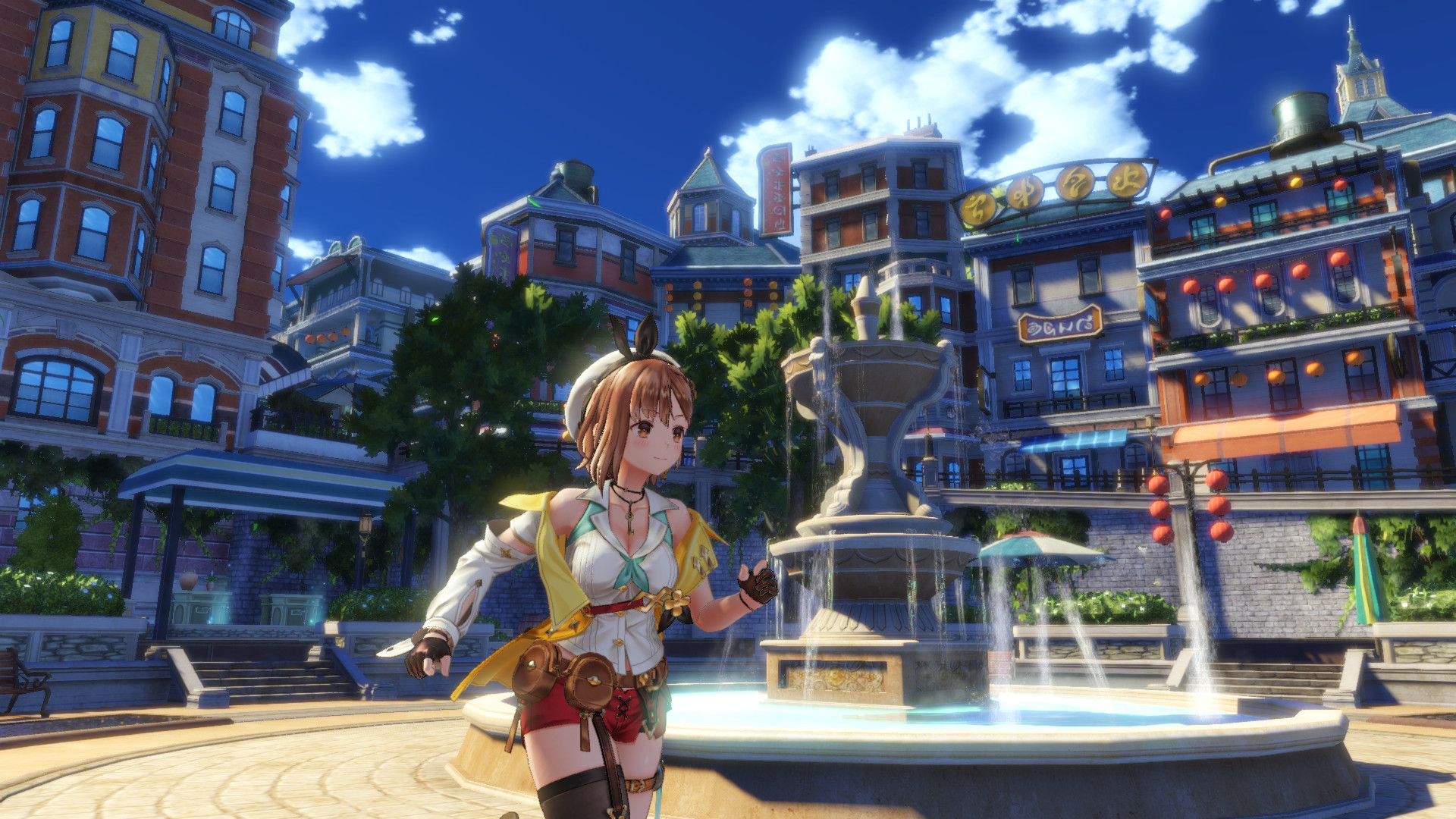 Ryza 2 tells a much deeper and complex story than its predecessor. Taking more cues from classic JRPGs of a young heroine on an adventure that leads them into becoming the only hope and salvation of something catastrophic to come.

Ryza’s drive and passion for knowledge and alchemy is a joy to watch, and seeing how much she’s grown as a character is another nod to how great her writing is.

Alchemy Is The Funniest And Easiest It’s Ever Been

Alchemy has always been the selling point of the Ryza franchise. With every iteration, the alchemy system has gotten refinements to improve it and make it easier to navigate and manage. Every Darkness & the Secret Hideout was the most accessible the alchemy had ever been, but with Ryza 2, it’s just a breeze to pull off.

The mechanics and interface remain the same, but it’s less important to pull off alchemy to enjoy the narrative of the game. There are plenty of moments where you have to craft specific items to progress in the story, but it’s nowhere near as bad as it used to be. A great addition is looking up where a specific ingredient is located with a simple press of a button. It’s also great that you can craft items automatically by quality. 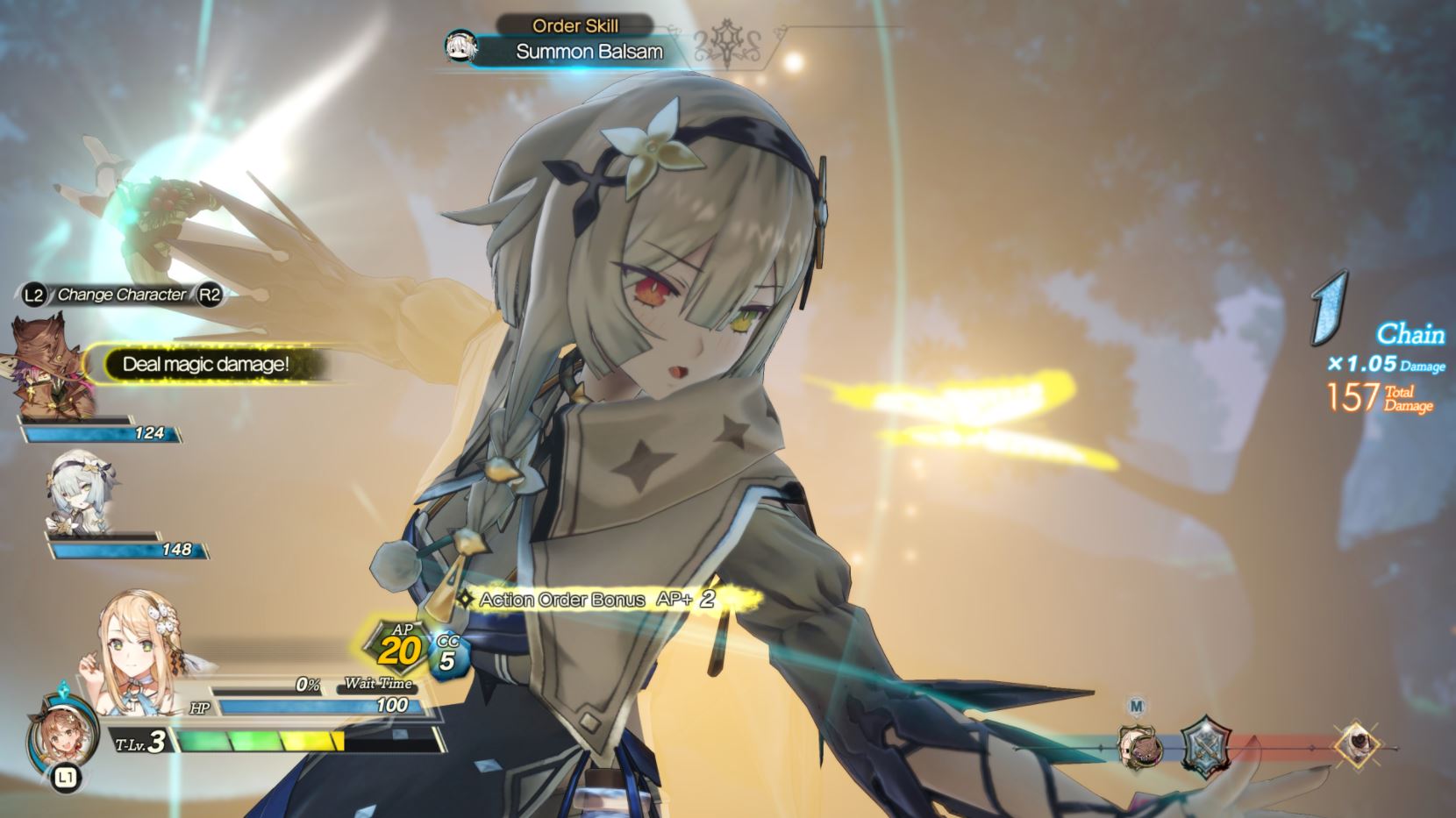 With a button press, you can craft whatever you have the recipes for, depending on quality. You only have two options: High and Low quality. The higher the quality of materials used, the better benefits you’ll get from the crafted items. These benefits include healing items that can also cure poison or improve your gathering skills and how much material you collect from gathering points.

Learning recipes is also linked to the skill system this time around. As you craft items and complete tasks, you’ll earn SP (skill points). These skill points are used to unlock new crafting recipes and gather instruments such as fishing rods and axes that allow you to gather better materials.

Most of the game takes place in the capital and its surrounding locations. These locations are your typical marshlands, forests, and long, lost ruins. Exploration is straightforward with plenty of materials to find from metals, flora, and monster furs. Ryza can swing on ropes to reach specific locations, climb vines, and swim to explore the world around her. 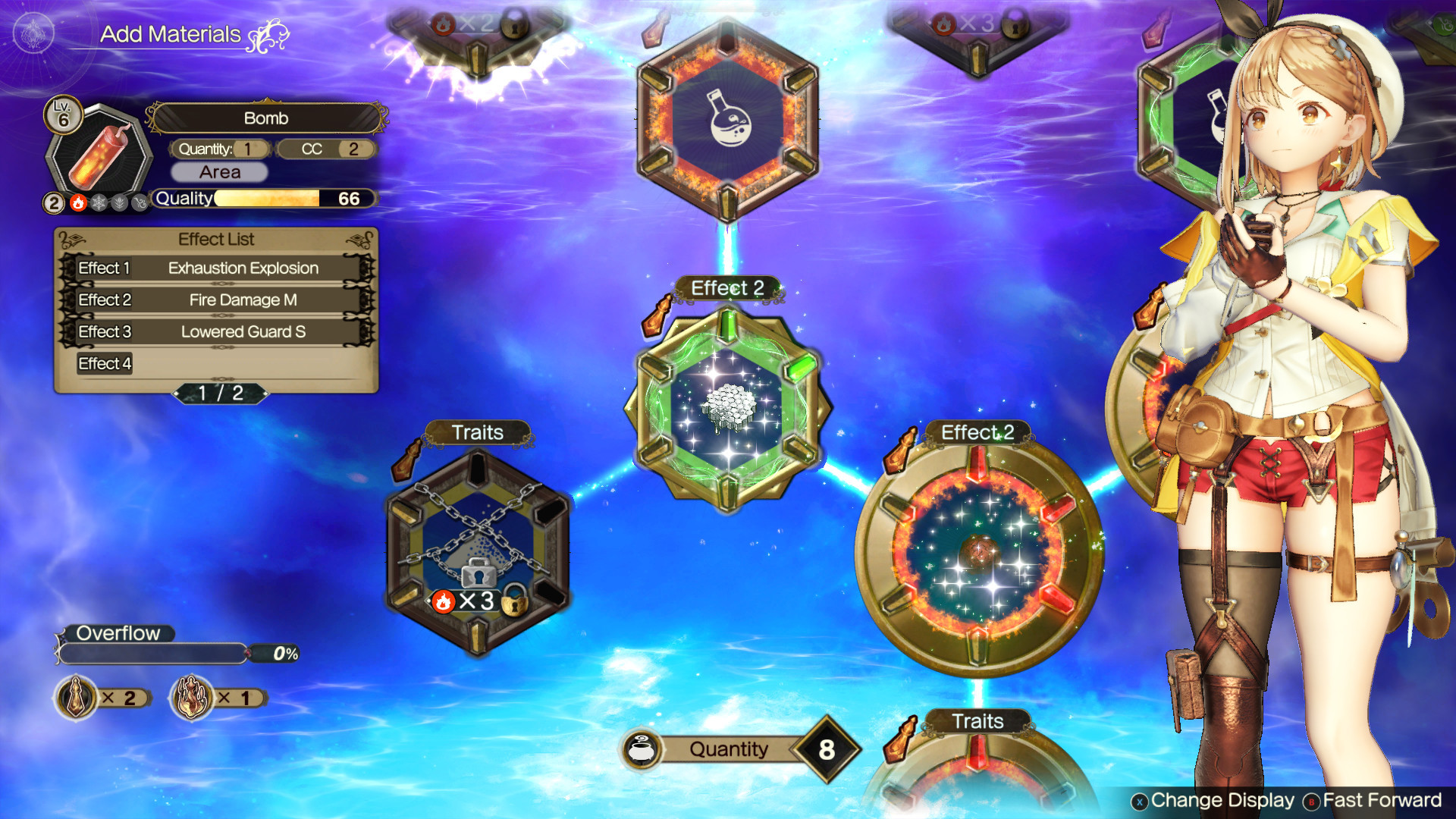 Great Combat Is Fast And Entertaining, Though It’s On The Easy Side

The world is full of monsters to hunt and massive bosses to fell. The combat has once again received a massive overhaul. This time around, Ryza 2 includes a Full Active Time Battle System. This means that enemies can attack you while you think about your next actions. Every normal attack you pull off provides you with AP. To pull off your character’s individual skills, you need to build up that AP.

AP is shared among the four companions on the battlefield. Each skill uses a specific amount of AP points and can be combined to pull off three skill attacks back to back. Your companions will also ask you to perform specific attacks like a magic attack or something more advanced like an attack that inflicts status ailments on the enemy.

If you listen to their advice, that teammate performs a powerful chain attack adding extra damage. The more attacks you pull off during the fight, your Tactics level also increases. When this happens, your maximum AP points will increase for that battle allowing you to pull off even more chain and special skill attacks. 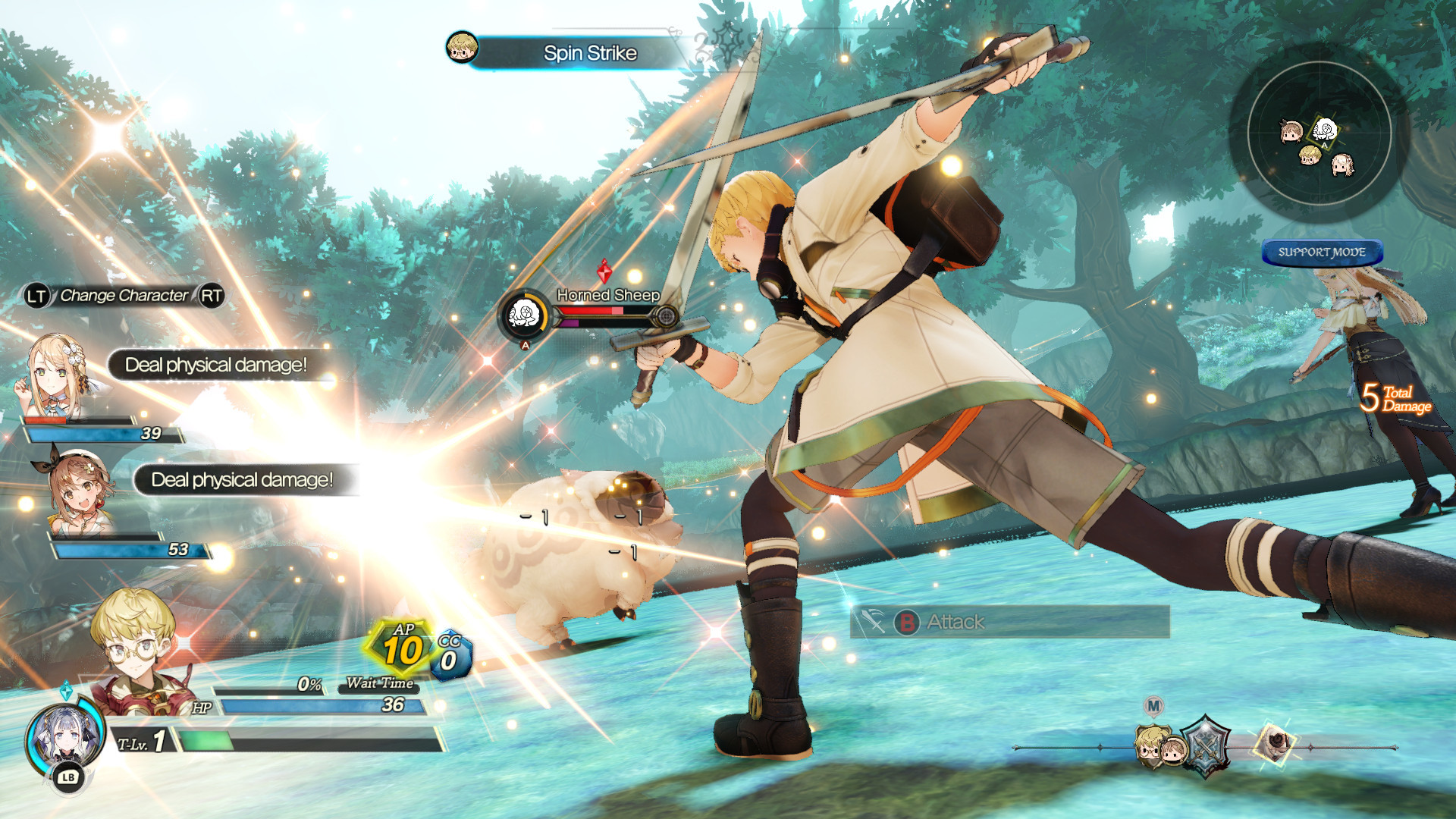 Unfortunately, the game isn’t all that difficult on normal settings, so utilizing many of the game’s combat mechanics may not be as necessary as the tutorials make it sound. For the most part, it just feels like a fun RPG that casual fans can jump into and not worry about getting into combat and grinding out levels for long periods of time.

Graphically the game won’t blow people away, but it’s definitely competent in its design. The characters especially boast great animations and designs. You’ll notice an upgrade from the original title, but it definitely doesn’t compare to many late gen PS4 titles or even a PS5 game. Sound design is also not very memorable, and the game’s combat music can get quite annoying. It’s your standard flair with nothing that truly stands out.

The Best Atelier Game To Date

Atelier Ryza 2: Lost Legends & the Secret Fairy is a great entry to the Atelier franchise and my favorite. Ryza and her companions are a great cast of characters. The world and through design is still a blast to explore. For someone more interested in the franchise’s RPG elements, I was happy to see that the importance of alchemy is just as important as combat, exploration, and storytelling.

Atelier Ryza 2: Lost Legends & the Secret Fairy improves many of the flaws from the original game while carving out its own identity. Ryza and her companions are some of the best this franchise has seen. With a bigger focus on story, combat, and character progression, Atelier Ryza 2 feels more like an overall RPG experience rather than just a crafting simulator. It's not a perfect game by any means and it does suffer from some issues but they in no way hamper the overall experience.