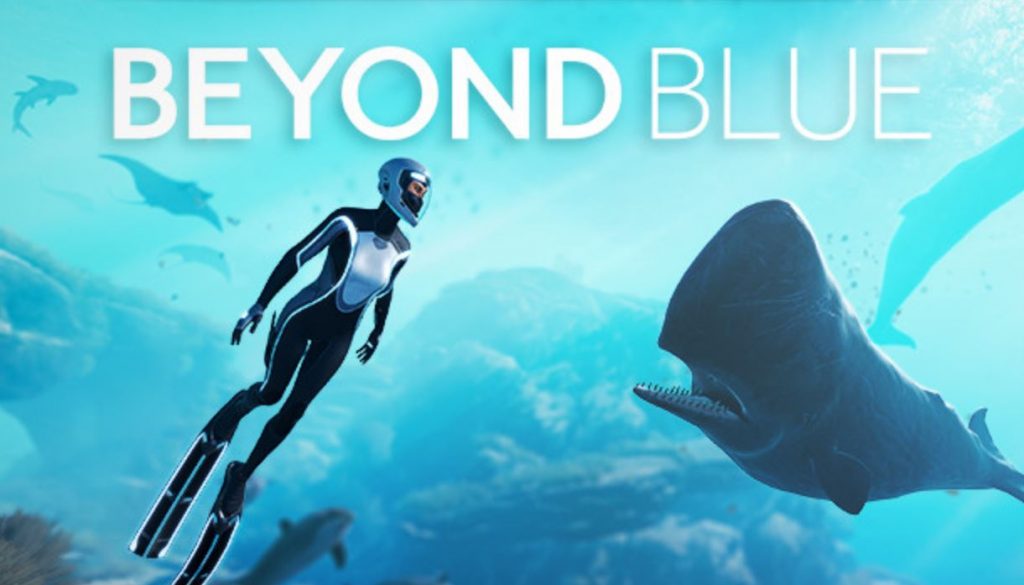 Usually when I hear the words “educational game”, my eyes roll up into the back of my head and a thin pool of drool starts forming at the corner of my mouth. I’m happy to sit in my living room and watch National Geographic specials all day long on Disney Plus, but try to embed any of that educational information in a game, and I angrily regress to my ten-year-old self. This is a game, not a school. I want to have fun, not learn. What is this nonsense?

But for some reason, the trailer for Beyond Blue caught my interest. I had just played the blood-and-guts aquatic-murder-festival Maneater, and the idea of cruising smoothly through the cool ocean without some hyper-aggressive orca trying to take a chunk out of me every thirty seconds sounded soothing. I supposed that I could put up with a bit of learning in my game if the tradeoff was that I could relax for a while. And it turns out that – despite some shortcomings – Beyond Blue was just what I needed in my gaming life.

Beyond Blue takes place in a near, somewhat sci-fi inspired future. In this world, diving tech has progressed to the point where divers can free-dive in the deepest depths of the ocean without the assistance of a submarine. As the intrepid and fearless marine biologist Mirai, players need not worry about the crushing weight of the water above them. Mirai’s scuba suit and rebreather will keep her safe right down into the midnight zone – the depth of the ocean where bioluminescence provides the only light.

Over the course of eight dives, Mirai ventures out into different areas of the ocean, scanning sea life with her scanner (for science, of course!). Each dive takes on a quickly established routine. Swim out to a buoy, scan the nearby ocean for points of interest, swim out to those points, scan whatever she finds there. The only two real mechanics in Beyond Blue are swimming and scanning, and that’s fine.

Of course, since Mirai doesn’t need to worry about running out of air, she is free to explore her surroundings at her leisure, scanning merrily away at whatever lifeforms she happens across. The more she scans a lifeform, the more information is transmitted back to her submarine base. Once compiled, this data provides a rudimentary overview for that fish (or dolphin, or whatever) that you can peruse between missions. This provides just enough motivation to keep players scanning happily away, even though doing so is mostly inconsequential.

None of the animals encountered in Beyond Blue present any danger to Mirai, beyond the occasional inky close encounter with a surprised octopus. In fact, Beyond Blue might have slapped a “don’t try this at home” label on itself, as Mirai cheerfully swims among many giant marine animals that could easily kill her, with nary a thought for her own safety. I purposely dangled my delicious-looking body in front of various sharks and toothy fish, but nope. Not interested.

There Is A Story (Of Sorts) In Beyond Blue

These diving missions are connected by a loosely formed story delivered through some surprisingly good voice performances. Mirai is performing dives for two researchers, one devoted purely to science and conservation, another that is more motivated by the commercial applications of their shared discoveries.

There is a bit of push and pull between these two, but most of it boils down to a bit of good-natured banter. In the end, these folks are all on the same team, and any story threads that might lead to tension are quickly dropped.

The writers clearly didn’t want to ruffle the super-chill vibe they had established, so mostly these peripheral characters are in charge of sending Mirai on her next mission and explaining to the player what their motivation is. Many of the dives are narrated for the sake of an audience watching at home via a public video steam, which serves as a convenient, if somewhat clumsy, device to allow the characters to chatter on about what’s happening on screen.

All of this adds up to a nice, relaxing gameplay loop, with an overarching storyline about Mirai tracking a newborn sperm whale and her pod being the primary narrative thread. Revisiting this group of giant mammals serves as a touchpoint throughout the game and leads up to the only emotionally resonant moment in the entire game. Beyond that, its mostly just swim, scan, and chill.

There Is Nothing To Do In This Sub

In between missions, Mirai hangs out on her submarine base, listening to some shockingly good soundtrack tunes and making calls to her co-workers (and her sister – who offers some background on Mirai’s life and grumps around about her life but doesn’t really have a compelling reason to be in the game). These calls continue the slight etching of a storyline, but for the most part, they are skippable.

It is interesting that the team behind Beyond Blue went to such efforts to get good actors and assemble a quality soundtrack for this game – because in the end, the game does very little with either. The story just kind of craters, and the tunes are only heard while on the submarine. There is next to nothing to do on the sub, beyond browsing your fish data and launching the next dive, so most of these quality songs just go unheard unless you make an effort to listen to them.

The best activity on the sub is the viewing of some high-quality mini-documentaries that unlock throughout the game (the tunes fade away while watching these). But as most of these educational films are about ninety seconds long, I tended to let them accumulate and watched them all at once. There is some fascinating information tucked into these vignettes, which adds a lot of real-world context to the events in the game, so they are definitely worth a look.

A Worthy Dive That Doesn’t Quite Bring You Home

In many ways, Beyond Blue sneaks its educational aspects under the radar, and when it does deliver them, they are appealing and well done. Even an educational-game hater like myself found a lot to enjoy in my four hours with Beyond Blue. It’s just so relaxing to swim around with whales and groove out to their moans and clicks.

If only Beyond Blue had found a way to really bring its storyline home rather than just letting it peter out, this might have been a new classic. As it is, Beyond Blue is still a worthy effort, and well worth the time spent swimming and scanning (and chilling). There are far worse ways to relax in our stressful world, and if you are thinking that you might enjoy a few hours at the bottom of the ocean, you are likely correct.

Beyond Blue is now available on PS4.

Beyond Blue is an educational game that delivers its lessons in a very relaxing manner. Players spend most of the game swimming around and looking at fish, and that’s totally fine. Though it doesn’t nail the story, that’s not really the point – the documentary footage is informative and interesting. Beyond Blue is well worth the time for those curious about the depths of the sea, and the subtle ecological lessons it teaches are valuable enough to overlook its shortcomings.