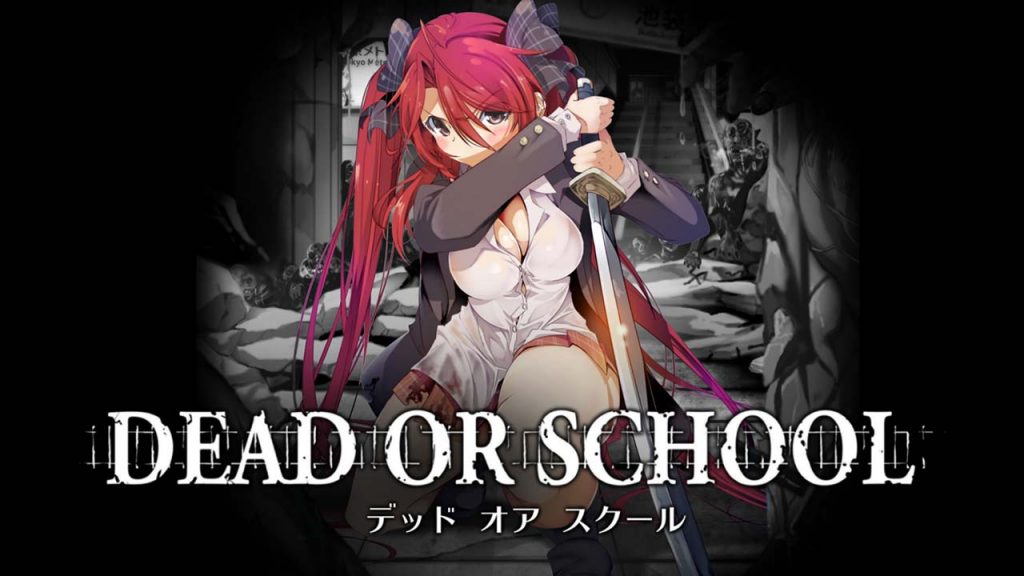 Created by indie Japanese developer Studio Nanafushi, Dead or School is a post-apocalyptic side-scroller set deep beneath the streets of Tokyo after a mysterious virus has turned much of humanity into monsters and mutants. It’s up to you to fight your way back to the surface from the underground shelters, so you can wipe out the mutants and finally attend school! Yes, you read that correctly.

In a classic tale of curiosity outweighing fear, Death or School follows young Hisako on her long, perilous journey from the depths of the underground shelter she’s ever known, to the surface world the elders say have been overrun by mutants and monsters for the last 78 years.

What would make her risk her life? Turns out, her grandmother’s last memory of the surface before fleeing underground is that of her school days. Having never experienced school for herself, she throws on her grandmother’s old school uniform and sets off to recruit companions to help her fight her way to the surface. The goal is to reach the surface so they can all attend school together and have some good ol’ fashioned fun.

Apparently, kids don’t gather and socialize in this underground world, so the idea of school being a place where you can do just that everyday in addition to learning, is all to appealing for Hisako to continue to stay down below in relative safety. The only two logical options are to be Dead or in School.

The journey begins by riding the trains to the Shinjuku station. Here you’ll rescue and recruit Yurika, the first of many comrades you amass to accompany you to the surface, each with their own role to play along the way. It is also here that the you are met with the first of many tutorial screens walking you through the game’s combat controls. The game quickly gets back on track after said tutorial.

Early on the pair’s journey, they begin suspecting something is amiss with the fact every single person seems to have lost their memory of the surface world. What are the odds of that? Could some nefarious force be at work? You’ll find out in due time.

Yurika explains that over the past 78 years since humans fled underground, all pre-war history and culture had been lost. She goes onto explain her role as a Civilization Investigator is to restore the lost history and technology of the old surface world. Impressed with Hisako’s determination to reach the surface, even if it’s alone, she agrees to go with Hisako and attend school with her.

Slash and Blast Your Way to The Top!

Throughout the game, you’ll encounter plenty of monsters, zombies and mutants to strike down. Combat is varied and there are a healthy number of subquests to keep you busy as well.

Controls are relatively simple overall, yet varied enough that combat feels satisfying. That said, I must confess that the controls are just odd enough, that I occasionally forget what buttons do what when enemies jump out when I’m not expecting it. That said, you can remap the controls to a configuration your liking.

At times, gameplay can feel reminiscent of classic Ninja Gaiden, Shinobi and Contra games of the 90’s, which is a good thing. This is mainly due to the fact there are three classifications of weapons at your disposal: melee weapons, guns, and heavy weapons such as rocket launchers. Each modify the gameplay just enough to feel unique to the type of weapon you’re using.

Tapping R1 cycles through your weapons but you can only have one weapon of each classification equipped at any time. Alternatively, each weapon is so assigned to a direction on the D-pad allowing you to jump to a specific weapon during combat. New weapons can be picked up throughout the game by destroying weapon crates and killing various bad guys. You can also purchase munitions from the various weapon vending machines sparingly distributed throughout each level.

Another mechanic I have to mention is the “Uniform Broken” mode Hisako enters when her health runs low. When her uniform is torn, her attack and defense statistics gain a boost. The cutscene that accompanies is a bit of an odd choice too and the whole mechanic centered around her torn uniform may leave some players feeling conflicted about its inclusion.

There is a fairly comprehensive weapon customization system in Dead or School. When you reach a Save Point, you can swap out equipped weapons, modify them, or sell them. Weapons can not only be modified with attachments you purchase or pickup, they can be reinforced with reinforcement gears and money.

The weapon attachments act as stat boosters, such as to a 2% increase in power. Weapon reinforcement gears on the other hand, increase the level of your weapon which in turn raised the weapon’s attack power. Weapons upgrades max out at 10 levels which should keep you busy for a bit.

Furthermore, weapons can be modified, allowing you to change a weapon’s abilities. The catch with these is that you don’t know what ability you’re going to get when, and if, you decide to equip one. It’s a welcome gameplay mechanic I find rather interesting.

A Skill Tree And Progression System To Learn From

To compliment the weapons system, is a progressive Skill Tree system. It is presented in a rather pleasant chalk-board art style which differs from the aesthetic of the majority of skill trees seen in similar games. Furthermore, if you don’t like your current Skill Tree, you can reset and rearrange it. This is awesome and I wish it were more widely adopted to the standard skill tree model for similar games.

As you battle your way through the story, you’ll naturally level-up. Complementing the expansive progression system, are Souvenirs, which enhance your character with special abilities. For example, you’ll acquire a Smart Ticket souvenir early on which allows you to freely ride the trains.

In addition to the occasional boss enemy, you’ll encounter Rare Enemies which drop valuable loot, and Strong Enemies. You’ll want to steer clear of the latter as String Enemies are much more powerful than you. If you’re unsure whether you can beat one, it’s best not to try.

I won’t sugar coat it, the game itself is not the prettiest PS4 game out there. While it features beautifully illustrated character art and on-screen text effects, in terms of the underlaying engine, textures, and quality of rendering, it’s clear the team was under budgetary and/or talent constraints. The soundtrack and effects fair better and suffice without complaint.

The game’s dialogue is well-written and reveals some surprisingly deep thought that went into the it and overall story. Conversation is natural and easy to follow, and isn’t relegated to surface-level banter you can’t skip through fast enough. 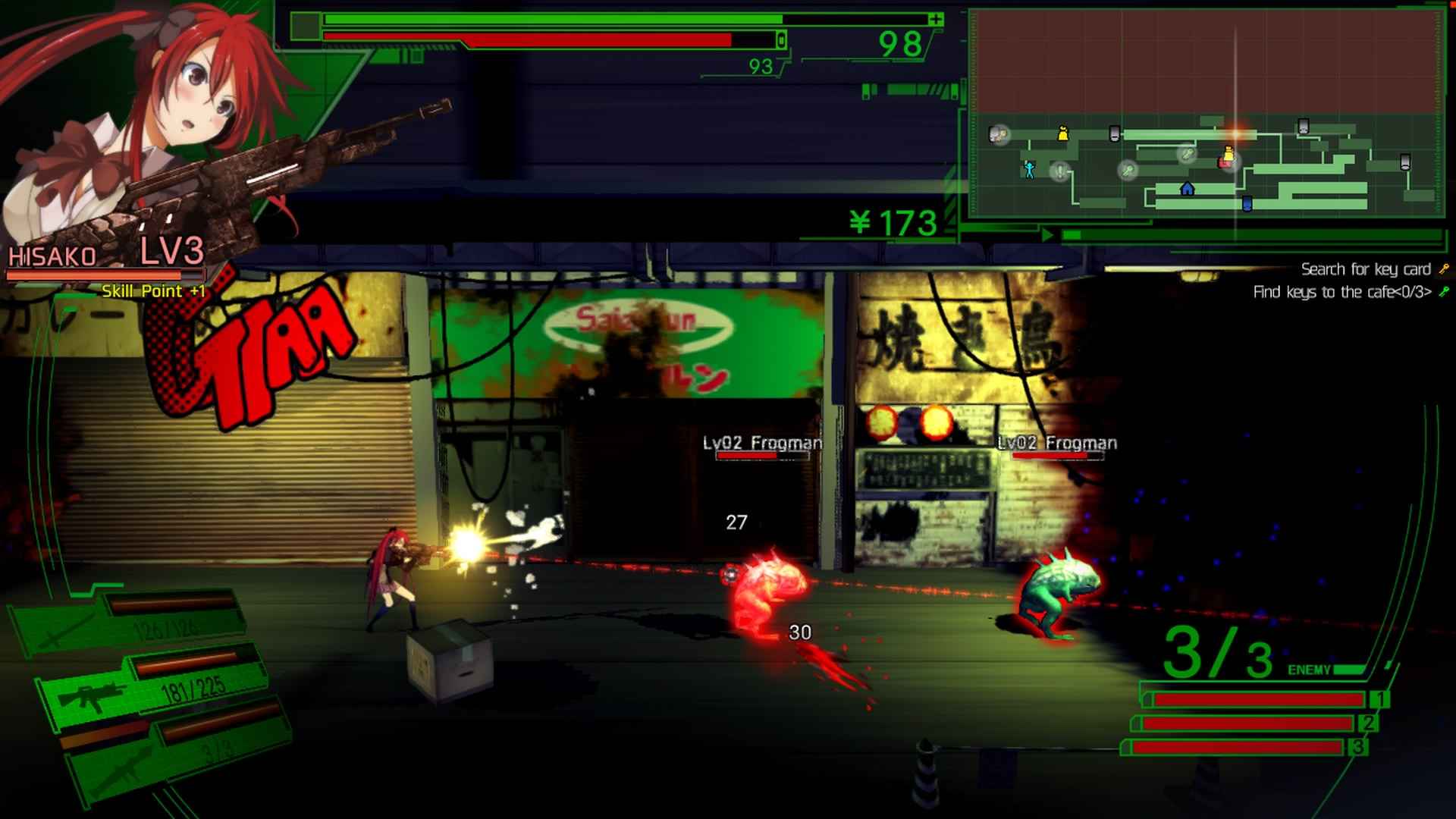 Despite some concessions, Dead or School is fun, humorous and packed with varied, satisfying combat. If that's your jam and appreciate an original plot, Dead or School belongs in your collection.