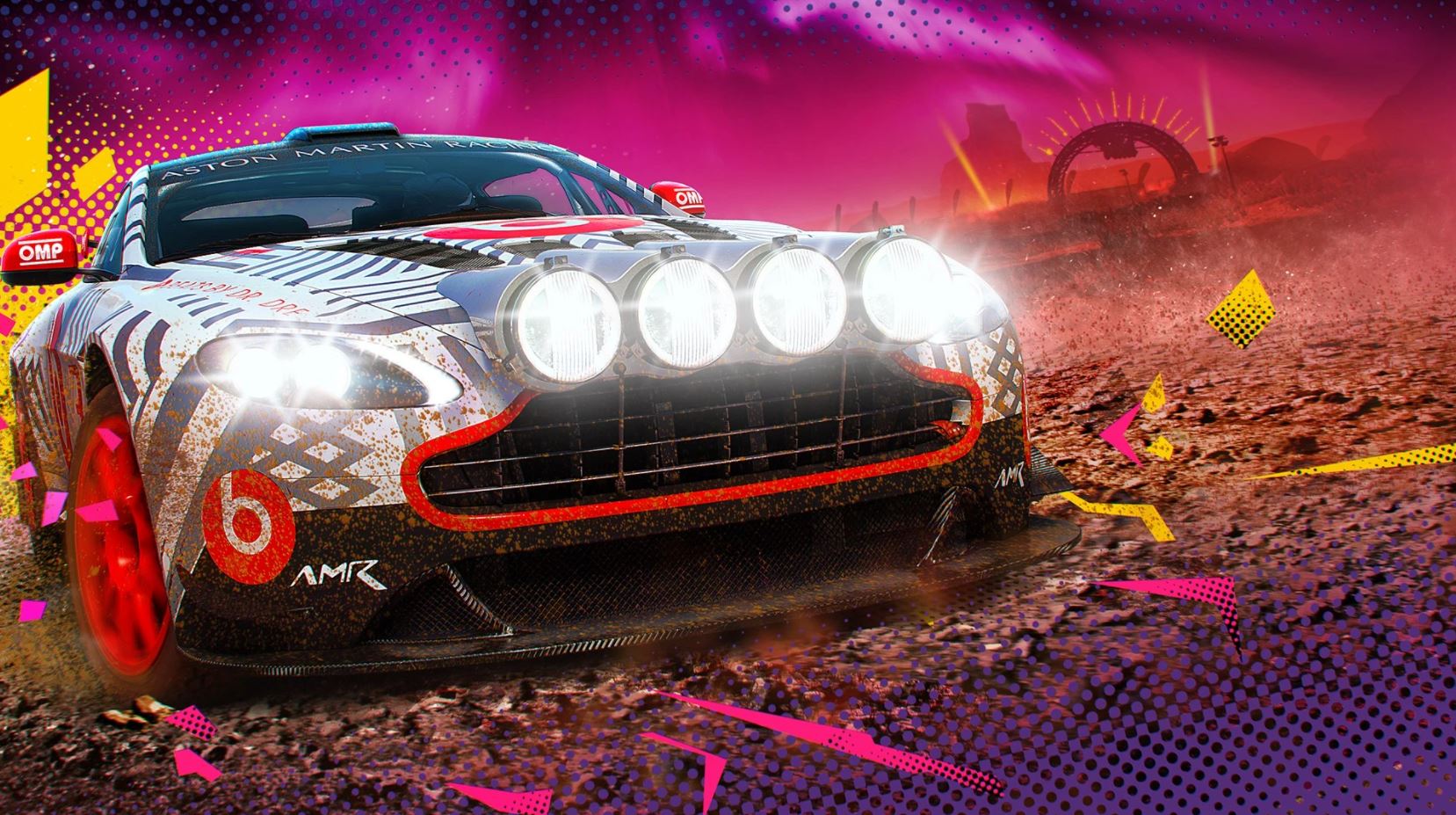 The expectations for the next generation of consoles is understandably high, particularly as the current generation has been with us for seven years. The potential for ever more realistic visuals is the most obvious advantage of the processing power from the new consoles on offer from Sony and Microsoft and this won’t be hard for the studios to deliver.

However, the gaming public also expect innovation from developers to deliver fresh new experiences and concepts within the constraints of the big budget studios need to guarantee a return from their investment in the product.

Codemasters’ latest entry in the DIRT franchise has been developed simultaneously for the current and next-gen consoles by Codemasters Cheshire (previously Evolution) who were behind the entertaining battle-racer Onrush. This is also the same team who were involved in producing the landmark racer Driveclub released at the beginning of the PlayStation 4’s lifespan.

With that said, does the latest DIRT game showcase innovation in the gameplay department to match the impressive visuals?

A Combination Of Games And Genres

After decimating the reputation of the Project Cars series with the punter-friendly but forgettable Project CARS 3, Codemasters has decided to tear up the rulebook written by their own popular franchise spawned from the superb Colin McRae rally series, which first appeared on the PSOne in 1998.

Now that the Dirt Rally games are focusing on the simulation aspects of rallying, the authentic but highly accessible DIRT series seems somewhat redundant, leaving Codemasters the option of going for a full arcade experience. As a result, DIRT 5 bears little resemblance to the rest of the series other than the gaudy 80s menu screens and the inclusion of the ‘Gymkhana’ disciplines.

Instead, what we have here is closer to an off-road Driveclub in the career and multiplayer modes, with the ‘Playground’ stunt creator mode resembling a muddied-up Trackmania Turbo. So far, so uninspired, and hardly next generation standard.

A Feast For The Eyes

So what does this latest rally game bring to the table that hasn’t been seen before? Well, firstly the visuals are quite splendid, particularly the lighting and dynamic weather effects. Even on the base PS4, the amount of atmospheric detail flying past along with twelve detailed cars at 60 FPS is astonishing.

There’s some pop-up and odd glitches, which will hopefully be patched out, but nevertheless it’s a feast for the eyes on nearly all of the greatly differing stages from across the globe.

The weather effects are nothing short of dramatic, especially when the whole track is taken by a convincingly orange Moroccan sandstorm. Puddles on track become deeper on each lap and the dirt and spray from your fellow competitors’ vehicles reaches a new high in convincing detail.

A Line In The Sand

The career is pretty much an uninspiring linear affair, with the choice of two races to level you up initially, unlocking further choices towards a series of ‘finals’ before the next batch of events. Initially it’s interesting trying out the various race types and related vehicles for each, but as you progress through the long line of events, it’s not long before things start to feel a bit aimless.

Aside from winning, there are three mini challenges cued up at random for each race such as complete three drifts, ‘trade paint’ over a jump, or stay in first place for a certain amount of time. While this adds a certain amount of depth and enables you to win the full gamut of medals, there really isn’t much else to it, and for an arcade racer, that’s fairly bad news.

Earning ‘kudos’ from clean racing / drafting / drifting etc is a well-worn feature employed by racing games from recent history, usually to great effect in an arcade setting so it’s curious that Codemasters deemed it unnecessary here.

Along with the lack of depth, there don’t appear to be any online leaderboards for top lap times making each event a fairly hollow victory knowing that your hot lap disappears into the ether when the race has finished.

Another strange omission is the lack of race replays so any nail biting finishes are gone forever and it makes the excellent bodywork customisation tool fairly redundant unless you’re partial to using the Photo Mode. It’s a real shame being unable to admire your driving techniques in one of the 63 cars from 13 different classes after the race, as there’s never a shortage of crazy incidents during a race.

While there is plenty to complain about in the game, there’s also some enjoyable racing to be had especially once the online servers are populated. The comparison to Driveclub is an affectionate one, as the sense of speed and close competition pays great homage to the PS4 classic and manages to conjure a modern day off-road equivalent which will be great as a four player split screen or online against 11 other players.

Furthermore, the point to point races are especially exhilarating as the percentage remaining ticks down in the top left with your main competitor just within reach up ahead.

The Light At The End Of The Fudge Tunnel

The circuits deserve a nod for their intricate but accessible design, with a variety of surfaces and branching routes all keeping you on your toes and encouraging replays. Stir in the day to night time progression, dynamic weather and superb lighting effects and there are genuine moments of delight as you battle for first place.

Pretty much from the off, the cars are a blast to drive and are thoughtfully matched within each class despite obvious differences between the handling. There’s no option to upgrade or tune your car, but assists can be tweaked or turned off to up the difficulty level and the AI can also be made tougher so within the constraints of the arcade model, it’s a good system.

Alongside a healthy selection of classic rally cars (souped-up road cars), you’ll also enjoy the dubious pleasure of driving some humungous four wheel drive beasts and pokey steel framed engines on wheels and mud-centric stock cars, the latter of which are an absolute bugger to control. Between classes, there’s a massive difference in racing styles and you’ll be spoon-fed different rally disciplines as you toe the career line.

You’re gifted a free car for each race class, with a small selection of rival constructors available to purchase once your purse is fat enough. Filling up your garage is something to aim at I suppose, but without the ability to replay and save the memorable races, it undermines the work put in by the developers somewhat.

So, while the raft of strange omissions mainly plague the flimsy single player career, the multiplayer and stunt track creator will inject some life and enthusiasm into the title. Creating intricate ‘Playground’ levels will require a bit of patience and time, but once you’re done, you can upload it to the online servers for other players to rate and play against the fastest laps on your finely honed creations.

This element seems like a totally different game (Trackmania Turbo) but will no doubt create an enthusiastic community of racers who prefer the single-player challenge of ramps, flaming hoops, loops and double decker bus stunts.

DIRT 5 is a strange mish-mash of generic over-the-top presentational tropes, great arcade handling and wheel to wheel racing across some brilliantly realised and designed circuits, and a genuinely odd set of missing elements which would have given the racing far more depth and meaning.

It’s an impressive visual swansong for Codemasters’ rally series on PS4, but as a next-gen showcase of how racing games could be heading in the future, there’s zero innovation in the gameplay department and little to get excited about.

Rally fans should stick to Dirt Rally 2 or WRC 9 for an authentic sim offering, both with equally impressive visuals and endless depth. But if you have a hankering for some semi-brainless high speed off-road pack racing against your friends, DIRT 5 will deliver some superb thrills dressed up in magnificent graphical finery befitting of one of the final racers to be released for this generation of consoles.

Difficult to love due to some glaring racing game omissions and zero innovation, DIRT 5 nevertheless entertains with its simplistic arcade handling, fine circuit designs and some delightful visual treats.