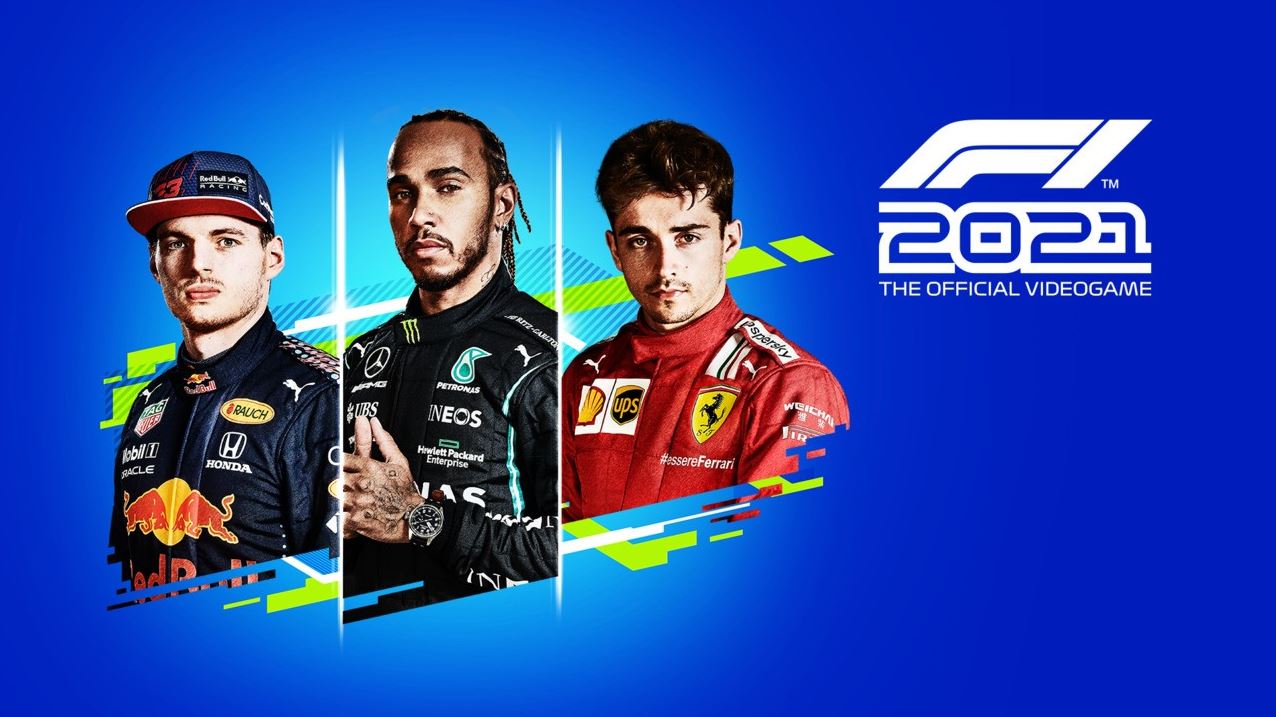 F1 2021 PS5 review Before 2014, Formula 1 drivers were assigned numbers based on their championship position in the previous season, with the exception of the thirteenth placed driver who was given the number fourteen and so on, thanks to the ancient superstition which states that the number thirteen is unlucky. F1 2021 is the thirteenth annual entry in the ever-improving series from Codemasters, with every game arguably outdoing its predecessor. That’s an impressive streak – can Codemasters be lucky enough to keep it going for the thirteenth time?

Despite the leap from PlayStation 4 to PlayStation 5 hardware, this year’s entry is once again a prime example of iteration over innovation, and this is apparent from the second you fire up your engine and launch the game. The initial setup will ask you the usual questions to find out how experienced you are with racing games, and allow you to fine-tune the game to your preference. As ever, you can play F1 2021 as an arcade-like racer, or as a hard-as-nail simulation of the pinnacle of the motorsport; yet it’s the new options nestled within these menus here which really highlight the extra attention to detail Codemasters has included here.

There’s the option to use a manual clutch with a three-pedal steering wheel setup (although that’s not the most authentic way to play an F1 game), you can replace the tried and tested flashbacks, which help you out of a pickle by allowing you to rewind a handful of seconds after a mishap, with an automatic “reset car to track” option, and the approximate weather forecast feature adds an extra layer of realism and unpredictability by preventing your race engineer from simply confirming the weather of an upcoming event with total confidence. 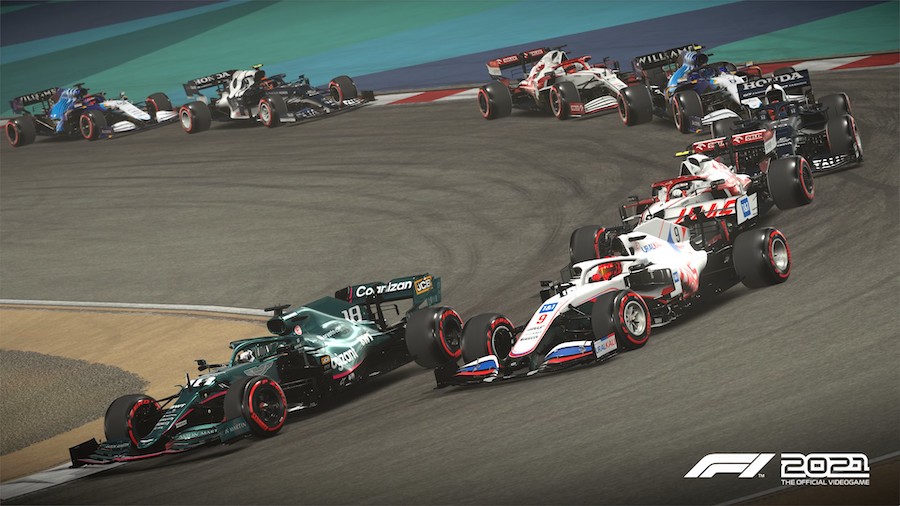 These new options aren’t just technical, either. There’s also dozens of modifiers and settings which can be adjusted before starting a Career or delving into the returning My Team mode from F1 2020 – from how generous the game is with dishing out its virtual currency and experience points, to how much responsibility you have as a team owner. If you were overwhelmed by the RPG-alike Research & Development upgrade system for example, you can now simply turn this off at the click of a switch and never give it a second thought.

I’d argue that the best way to play is with all of its features enabled, but the inclusion of these settings signifies how much more accessible this year’s game is to a wider audience.

Once I’d made it through the wall of options and got stuck into some racing, it immediately struck me how much more “at home” the game feels in your hands on PlayStation 5, thanks to the DualSense controller. I’ve played previous entries with both a DualShock 4 and an Xbox One controller, and unless you plan to invest in a racing wheel and pedals setup, PlayStation 5 is the place to play F1 2021. 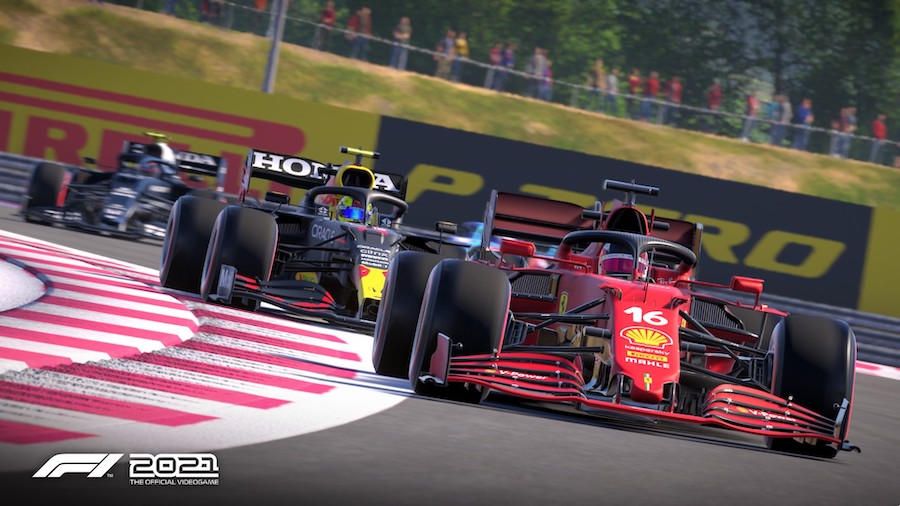 Driving over a kerb will rattle your controller and you’ll feel the triggers tighten when you lock a brake or spin your rear tyres under acceleration in a way that’s never been possible before, thanks to the DualSense’s haptic feedback and adaptive triggers. It may feel a little unnatural at first, but once you adapt your driving style and work with the resistance of the triggers, the physical feedback in your hands will genuinely help you to find the limit of your car.

Controls aside, arguably the biggest improvement to the gameplay over last year’s game has been with its AI racers. On one particular round of the Bahrain Grand Prix, I was naturally cautious into the notoriously acute left-hander that is Turn 10, which gave Max Verstappen’s AI enough of an invitation to send a steaming overtake down the inside and into the lead for the back straight.

Later on, Red Bull junior Yuki Tsunoda had a little moment where he stepped on the power too early and dropped his car into a gravel trap. It’s little things like this that demonstrate how much more alive races can feel. No longer will AI just plod around in their qualifying positions, but jostle for position, make mistakes and generally add some much needed spice to single-player action, often forcing you to rethink your pit stop strategy to accommodate a safety car (the frequency of which being another option that you can modify, by the way). 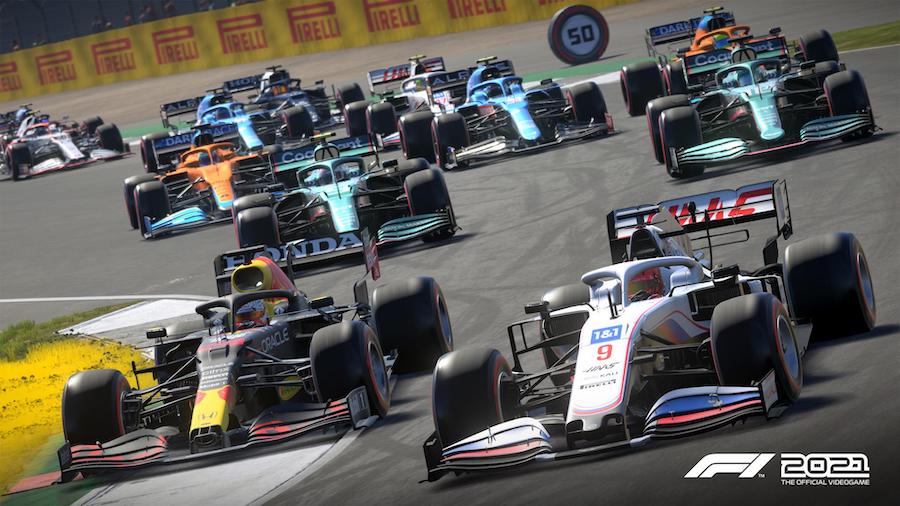 F1 2019 was the first game to weave unique characters and a storyline into its career, before the feature was dropped in favour of the brilliant My Team mode the following year. The latter has returned here, and it’s largely a cut-and-paste job from last year’s game, with a few minor tweaks to its interface and the setup of the staple Free Practice sessions.

These sessions are gamified with a bunch of objectives allowing you to unlock data for your team to better create a strategy for the forthcoming race, although once you’re acclimatised to each of the tracks, it’s hard to find the motivation to complete qualifying, race, tyre wear and ERS management simulations before jumping into the main events: qualifying and the race.

However, where you could simulate these sessions in F1 2020, you’re now forced to either skip them completely, thus missing out on Resource Points for your car’s development, or partaking in Quick Practice which asks you to choose which programmes you’d like to simulate within the allocated time slots. Some programmes are shorter so you could fit more work in, but these come with the caveat of being less likely to be successful.

It’s clearly an attempt to make these sessions more engaging with a level of risk and reward management, but it’s ultimately menu-based busywork obstructing the good stuff that you’ll just want to get out of the way if you, like me, have only just managed to break the addiction to this mode in F1 2020. 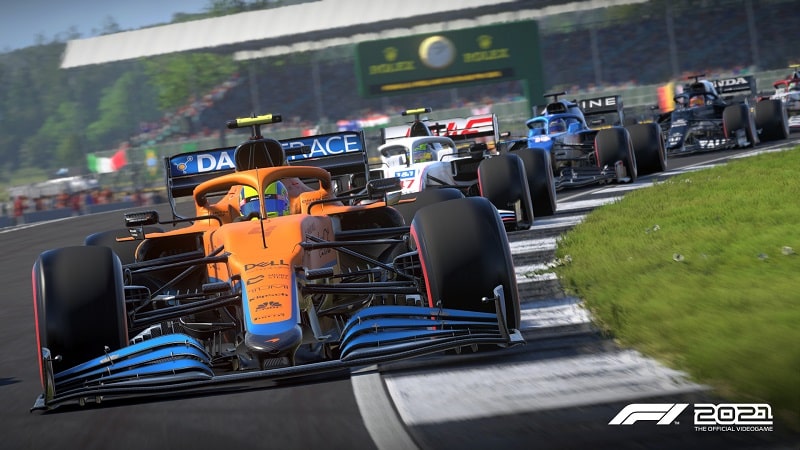 Braking Point is one of two big new features seen in F1 2021, offering a fully-fledged story mode which puts you in the shoes of Aiden Jackson and Casper Akkerman – two fictional teammates in one of the midfield teams with very different motives: one is a young rookie rising through the ranks, while the other is an old timer multiple world champion in his twilight years. The story is told largely via cut-scenes between the racing action yet it’s surprisingly immersive, giving some insight into the mentality and pressures of an athlete fighting behind the scenes to prove their worth.

Ultimately, it is just a handful of highly scripted races and scenarios in which you have specific objectives – be that as simple as “finish on the podium,” or “catch up to your team mate by lap 5” – which trigger cut-scenes for additional context and drama. It’s a solid first attempt by Codemasters – a fantastic effort which will entertain and engage newcomers much more than the technical and menu-based gameplay found in the other single-player modes ever could.

The other big new feature is the introduction of an online, two-player career mode. Naturally, I’ve not had chance to play this prior to F1 2021’s launch on 16th July, but if it works as well as the online infrastructure for public matchmaking elsewhere in Social Play and Ranked Lobbies then I can foresee the biggest problem being able to find a friend who owns a PS5, is a fan of Formula 1, and has the commitment to partake in a regular gaming sessions on a schedule that matches your own. That’s to say, the online side of F1 2021 is as solid as ever, and I have no doubt that this will apply to a new two-player career, too. 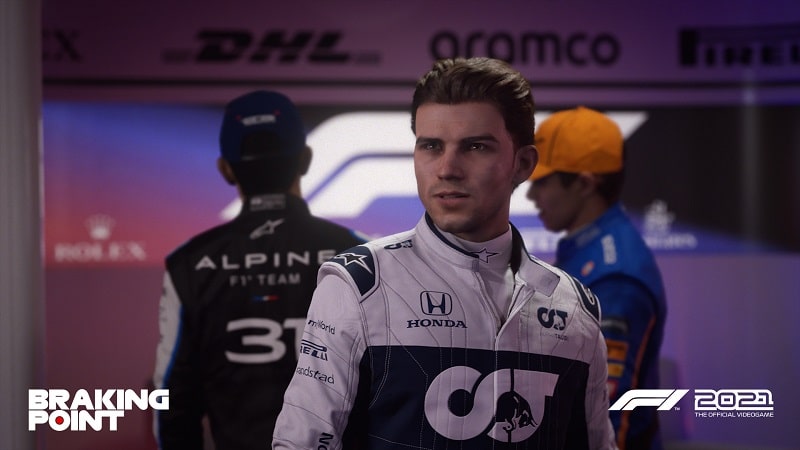 Since EA bought Codemasters earlier this year, it’s only natural that some of F1 2021’s online features have started to lean into EA Sports’ online systems, and thankfully in a positive way. The premium podium pass does return for a second year, allowing you to complete objectives in return for aesthetic items, but this can still be completely ignored without missing out on any meaningful content.

The matchmaking lobbies meanwhile have benefited from EA’s involvement, with “Unranked” being replaced by “Social Play”, which now has a handful of new parameters to filter public matches. Let’s hope the players who love to play dodge ‘ems with their competitors stick to the “No Etiquette” lobbies. Visually speaking, F1 2021 is a clear improvement over last year’s game – which was stunning in its own right – although it’s clearly a cross-generational game that’s not taking full advantage of the PlayStation 5’s capabilities, which leaves me excited to see where the series goes once Sony’s 2013 hardware is no longer a factor.

Presentation-wise, I could be nit-picky and say that some collisions do sound like generic “thuds”, but every other aspect is spot on and pushes Codemasters’ lofty standard ever higher, with beautifully detailed vehicle models, authentic engine noises which are unique to each of the four suppliers, and an upgraded damage model which now impairs your car’s performance when your rear wing, side pod or floor receives damage following a collision – which naturally can’t be repaired during a pit stop, forcing a new level awareness when racing wheel-to-wheel with your rivals. 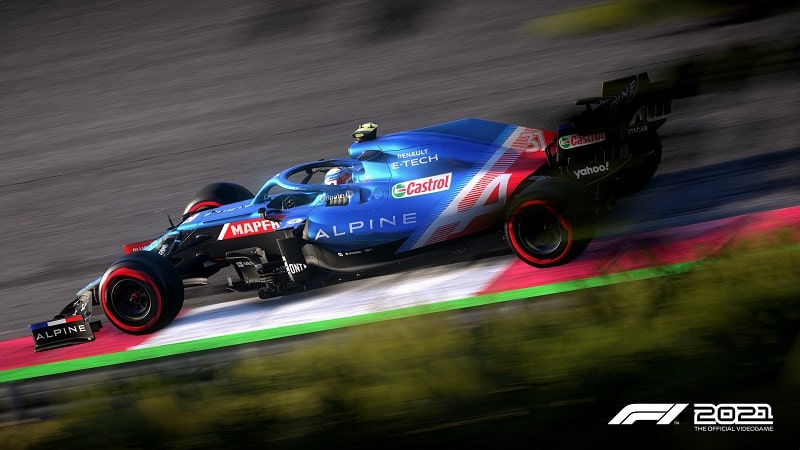 F1 2021 is certainly an improvement over last year’s game and the new best representation of Formula 1 in video games thanks to a plethora of quality of life updates throughout the game’s systems. The addition of Braking Point was clearly designed to entice a more casual audience, which it absolutely deserves to do, however there’s little fan service for more seasoned players as the Career, My Team and Online modes remain largely unchanged since F1 2020.

If you’ve grown tired of last year’s game then you can probably sit this iteration out; for first time players, or those returning after a couple of years' hiatus, Formula 1 games have never felt so authentic, so in-depth, yet so accessible. Slip on your race suit and climb into the cockpit.