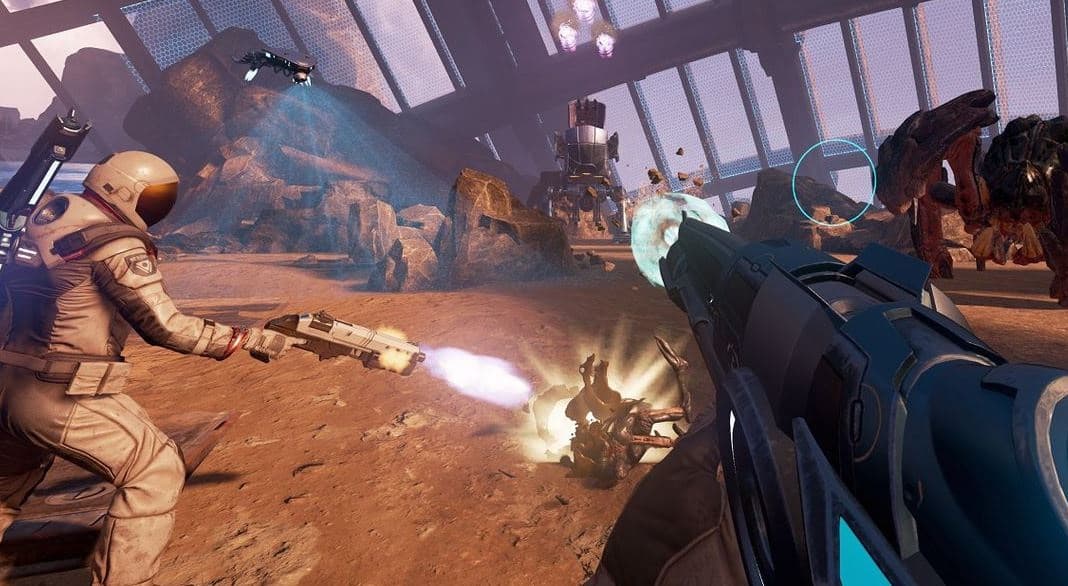 Farpoint PSVR review. Farpoint’s mission to prove that PS VR can host full-fledged video game experiences comes home with a somewhat enthusiastic “Mission Accomplished.” Among its FPS contemporaries, Farpoint stakes a claim merely on how fun and engaging shooting aliens in VR can be. The Aim Controller is a delight–comfortable to hold, near-perfectly tracked, and sensibly designed.

Once you adjust to a fresh button layout and the unique way the Aim Controller is modeled as a gun in-game, blasting aliens feels perfectly natural. The precision of the experience, and how empowering it can feel when everything is working as intended, can make Farpoint feel unlike anything else in gaming.

As a nameless pilot of a space exploration mission, things go awry when a wormhole whips you, two partners, and a ship of scientists through space. On the other side, you crash-land alone on an unknown, desert world. Through a series of holograms left behind by a crewmate, you begin to piece together what happened before your arrival. Along the trail, you’re beset by hostile aliens, including colossal, armored quadripeds, spider-liked burrowers, and the literal Half Life headcrab. 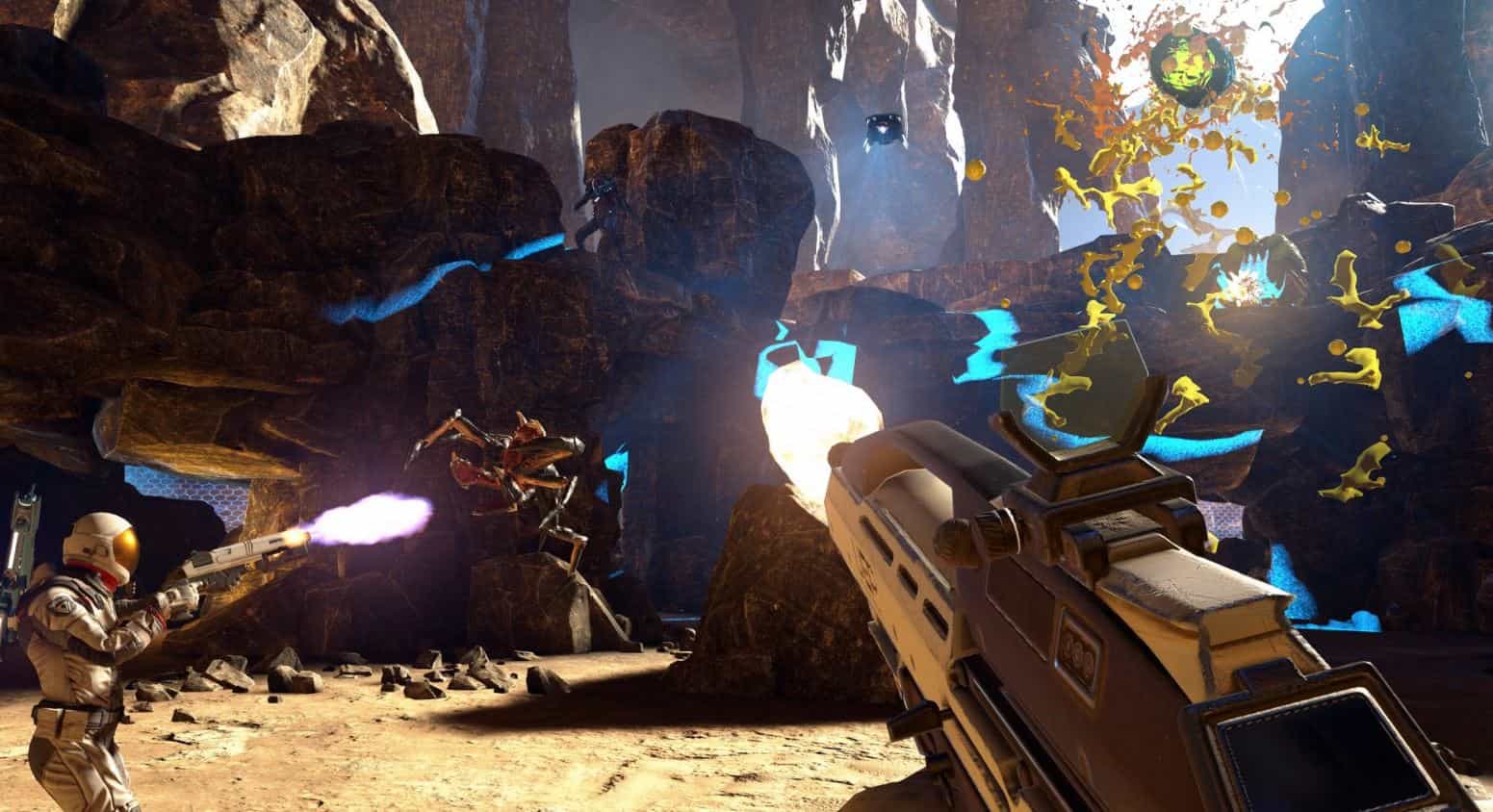 Storytelling is almost comically self-serious, done mostly via holograms with a knack for showing exactly what’s needed to advance the plot. Running counter to VR sensibilities, the game makes a weird habit of shifting the player’s perspective without warning. Sometimes, you’ll be inhabiting the main character. Other times, you’ll inhabit the body of a side character purely for a cutscene.

Then, one fade to black later, you’re a floating camera in the same room for a continuation of that cutscene. It’s jarring and distracting. I often found myself looking around at the start of a scene to discern who or where I was. Even after learning, I puzzled at why my view was shoved so close to a desk, or why view clips right through my body when merely looking down.

Combined with no subtitle options and a plethora of similar distractions, the story largely falls on its face. A handful of intimate character moments and a couple of interesting twists redeem the second half before a rushed, cliffhanger ending tosses away any goodwill. 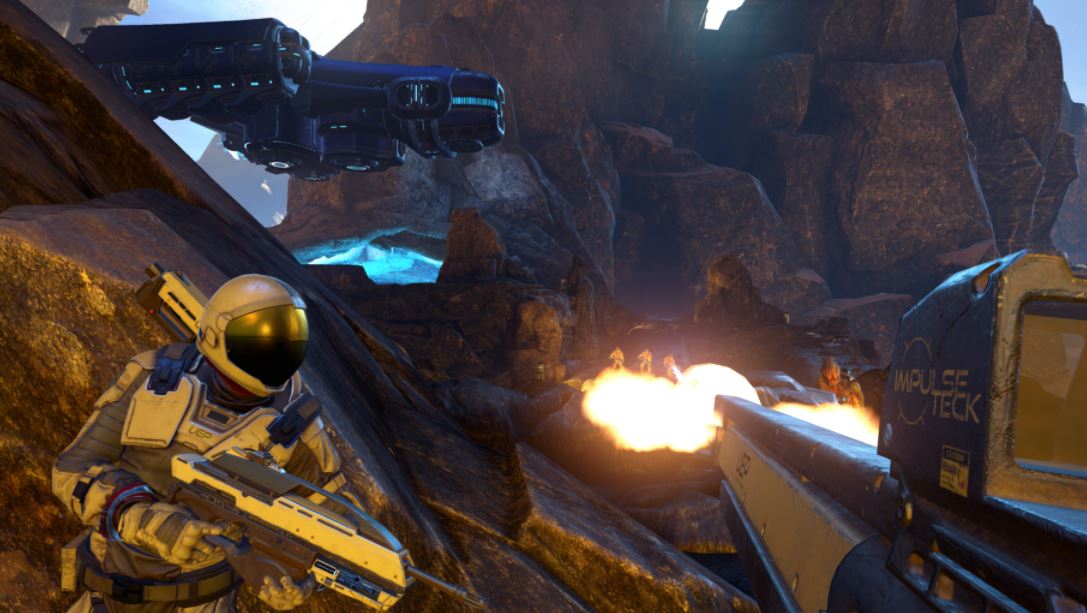 In a lot of respects, Farpoint’s elements range from passable to poor. It’s a testament to the strength of the shooting that these issues can seem small mere moments later. The thrill that comes from lining up shots as if firing in real-life, of feeling your controlled bullets and energy shots collide with aliens near and far, is a revelation. Farpoint is at its very best when it feels like you’re up against an army–or merely one particularly fearsome foe–and you emerge victorious purely through your wit and accuracy.

The Aim Controller plays its part admirably, with an exceptional, ergonomic feel and all relevant game controls within easy reach. By default, turning is done entirely through head movement. When you turn your head, your new center point becomes “forward” on the analog stick. This feels remarkably natural and allows almost unhindered movement, though turning around completely can be awkward.

The game itself de-emphasizes this, with extremely linear level design and enemies that almost exclusively approach from your front, but those who wish for greater control can try options that use the Aim Controller’s second, rear-side analog stick for making fixed-degree or free turns. I appreciated these options, but found them largely unnecessary. Farpoint’s default controls are very well-tuned, and the game’s arguably simplistic maps befit a playstyle without 180-degree turns. 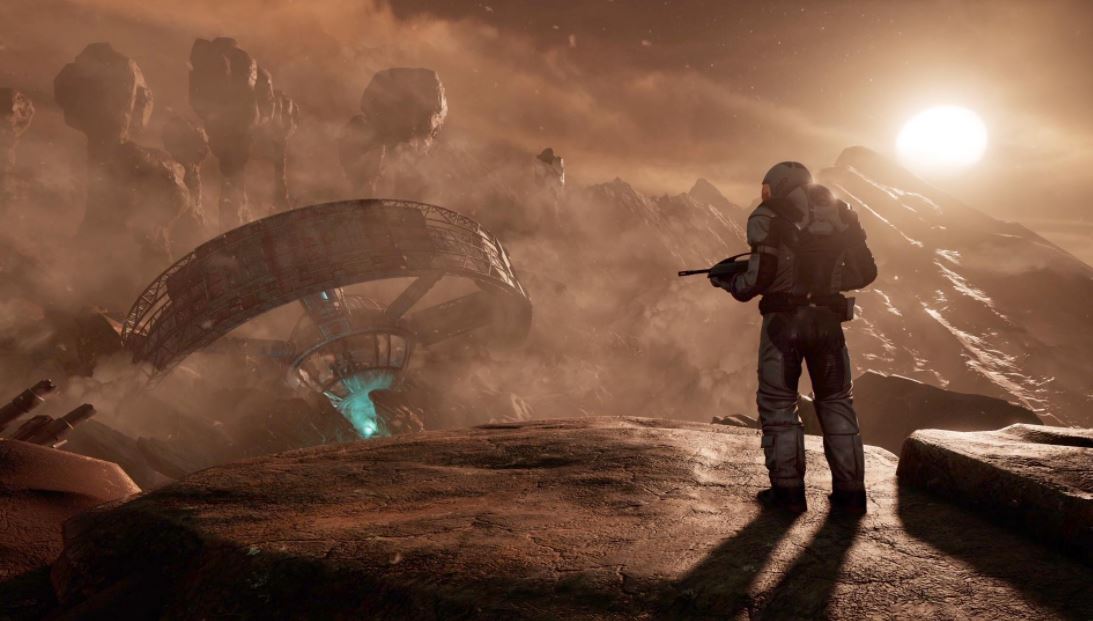 Encounter design, on the other hand, is far from perfect. Several of the 6- or 7-hour game’s battle rooms feel extremely trial-and-error, with only one or two cover spots being viable for taking down dozens of foes. Claustrophobic hallways give no room for lateral evasion, making the encounter feel like a time trial for pinpoint accuracy. The lack of difficulty settings compounds the problem, rendering a legitimately cool experience inaccessible for some. Indeed, at some checkpoints, enough deaths will trigger a soft handicap of extra grenades or rockets–a tacit acknowledgement that the base experience can be needlessly punitive.

The lack of alternative difficulties is just one of several puzzling absences. Right after initial setup of camera and position, you’re dropped immediately into the game, with no opportunity to fine-tune settings or syncing. That option is only available upon resetting the application. There’s no chapter select until you beat the game–forget about starting a friend fresh without creating a Guest account. An occasionally “off” audio mix makes the lack of subtitles hurt. There are several moments I imagine would easily trigger “fear of heights” anxieties, but no in-game warning of such moments.

Farpoint makes up for these deficiencies with extra, fun game modes. Challenge Mode, available after completing the story, allows you to replay main missions with a multiplier-based scoring system. Timed checkpoints and expiring multipliers reward fast play, but enemies give no quarter, making this the perfect way to compare skills between friends. Cooperative Mode takes that idea further, challenging your skills alongside a friend in real time. Cooperative Mode’s four maps are unique to the mode but visually familiar, distinguished more by waves of enemies than forward movement. 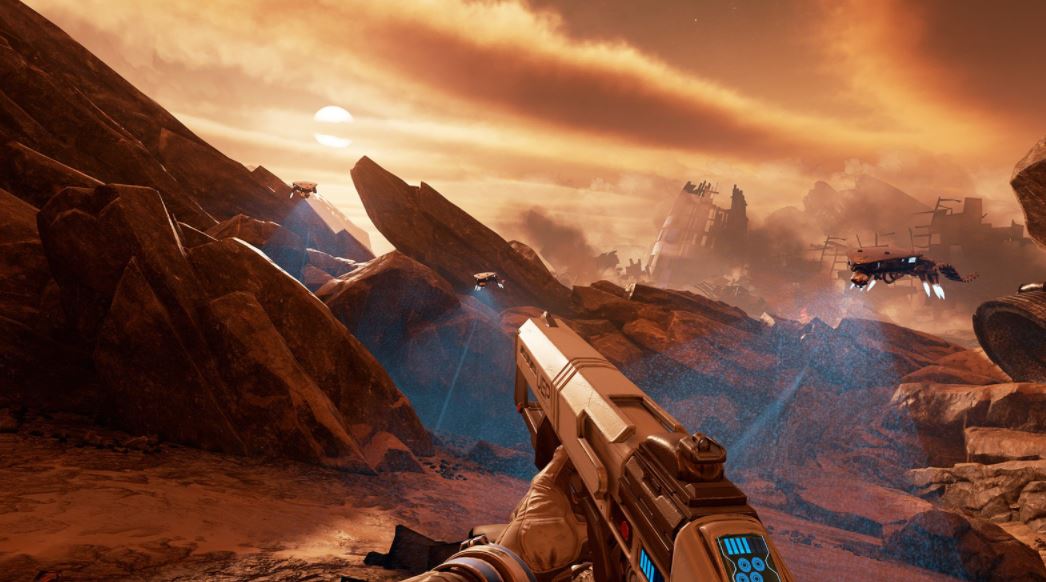 It’s surreal to be in this environment, moving and manipulating a virtual gun, while your partner does the same, and character models are surprisingly accurate to real-life movements and leaning. Being in the same space, wielding a physical weapon and aiming with your physical ability, makes for intense gameplay unrivaled by other co-op shooters. Alongside the campaign’s high points, Cooperative Mode is arguably the highlight of this game and Farpoint’s best chance at lasting appeal.

Farpoint’s large environments and highly detailed weapons are impressive on a technical level. So too are the main character’s shadow and articulations, which go a long way toward making you feel “present” in the world. However, Farpoint struggles to achieve true immersion. Myriad distractions, from enemies without shadows to the occasional jittery weapon and vision, broke my focus. The soundtrack keeps pace with an orchestral score that’s rousing and somber in all the right places, but like much of Farpoint, it’s far from memorable.

What’s truly memorable about Farpoint–what makes it worth a soft recommendation, despite all its shortcomings–is the shooting. Blasting my way through Farpoint was frequently thrilling and an experience only PS VR makes possible. When it’s trying to tell a story or wholly immerse the player, Farpoint stumbles more often than not, but its core experience is one worth sharing. It’s far, far from a killer app, but Farpoint manages to prove that traditional first-person-shooters have an exciting, promising home in virtual reality.

Farpoint VR is out now on PSVR.

Beyond its central conceit of virtual-reality shooting, Farpoint is the very definition of mediocre. But that shooting--especially in Cooperative Mode--is compelling, well-executed, and undeniably fun.