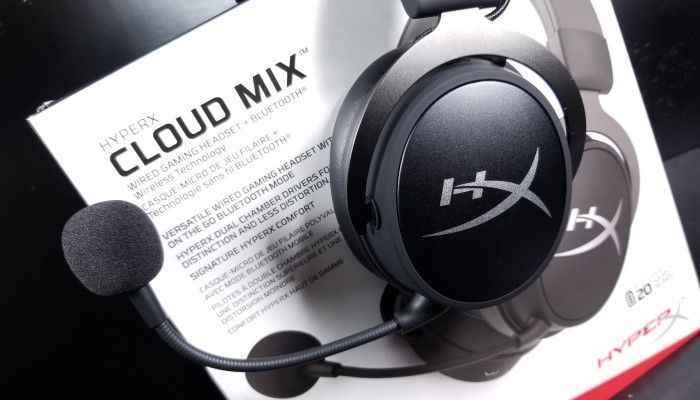 My personal gold standard headset has been the official PlayStation Wireless Headset, even on the PlayStation 3. Plenty of different headset exist out there. With such a competitive market, finding a good headset that fits your preferences, issues, and price range can prove troublesome.. Many headsets come close to meeting specific needs, but one or two features often get in the way of ultimately pulling the trigger on the purchase. In that regard, HyperX released the HyperX Cloud Mix Wired model with similar specifications that may not fit everyone’s needs, especially at a $200 price point.

Right out of the box, the Cloud Mix sounded great. All audio felt crisp, clean, and energetic. Nothing keeps the ears from hearing exactly what the game wants to deliver, which makes this headset feel awesome in the first couple hours. While this model features extra quality benefits from wired mode, it also offers a Bluetooth-enabled wireless option. First, I’ll start with the headset’s construction.

Construction of the Cloud Mix headset is very sturdy. Nothing shakes or feels loose when moved around, accentuating solid construction. Over the top of the headset sits a cushion that rests on the head. This cushion feels more like a precaution, since the earpieces themselves offer enough tension from the frame to pin the headset over the ears on their own. The earpieces themselves are framed by cushions similar to the one on top of the headset. The microphone plugs into the left earpiece, and it adjusts rather readily based on personal needs.

The Cloud Mix model feels quite different when directly compared to PlayStation’s headset. This headset behaves more like heavy-duty, sound-dampening earmuffs. They place tension around the ears in order to keep external sounds out of the ear. When I first put the headset on, I appreciated this feature. Other headsets tend to rest on the top of my head, and they trap skin oils under them and feel gross after a while.

Tensions and lack of connectivity

However, after a couple hours of extensive play, the tension placed on my ears caused a long-term pressure on my inner ear, which felt far too uncomfortable for me to keep using. I can tolerate the headset’s tension for an hour or so, but extended play cannot happen without antagonizing discomfort. One factor to keep in mind is head size. According to Google searches, the average hat size (small to large) ranges from 20 ⅞ inches to 23 inches. My hat size lands right in the middle of extra large hats at 23 ⅞ inches. I have an above average head size, and among hats, headsets also tend to feel overstretched around my head.

This issue may be exclusive to me, but this is one of many things to consider when purchasing a $200 product. The other big issue I had came with connecting to the PS4 itself. When wired to the controller with the provided cable, I had no issues. Sound audio from the speakers sounded great, and all microphone tests came back positive. In fact, those I spoke to over the network reported that the Cloud Mix actually sounded slightly better than my PlayStation headset.

However, no matter what I tried, I could not connect my model wirelessly to my PS4. The headset appeared on the device list when I tried to sync, but all attempts to complete syncing left me with an error message claiming a lack of support. Personally, this is a non-issue, because I’m so acclimated to having my wireless PlayStation headset wired into my controller that I no longer bother with the alternative. If this is your preferred method of play, then I recommend the wired model.

The Cloud Mix does connect to other Bluetooth-enabled devices, including PC and mobile, and it works quite well in those environments. To accommodate the wired option, HyperX also included an extension cord to extend the 1.3-meter cord an extra 2 meters, which ends up being about 10 feet of cable.

Audio and microphone quality make the HyperX Cloud Mix headset a worthy consideration when choosing a new headset. However, two features of this headset personally give me pause: the pressure the headset places over the ears and the lack of wireless connectivity with the PS4. The latter may not factor into everyone’s needs, but the former is something worth considering. Some gamers only play for an hour or so, while some binge entire games in one sitting. The Cloud Mix is not a headset for long-session players. Consider your needs before investing in this headset. The audio quality sounds fantastic. However, the physical attributes of the device may not be for you.

The HyperX Cloud Mix Headset is a bit of a mixed bag, especially at its price point. While audio and microphone quality far surpass expectations, its connection issues with the PS4 as well as the tension the headset could place on those with larger heads makes this headset one worthy of further inquiry. The positives are great, but the negatives could quickly create buyer's remorse for the wrong person.