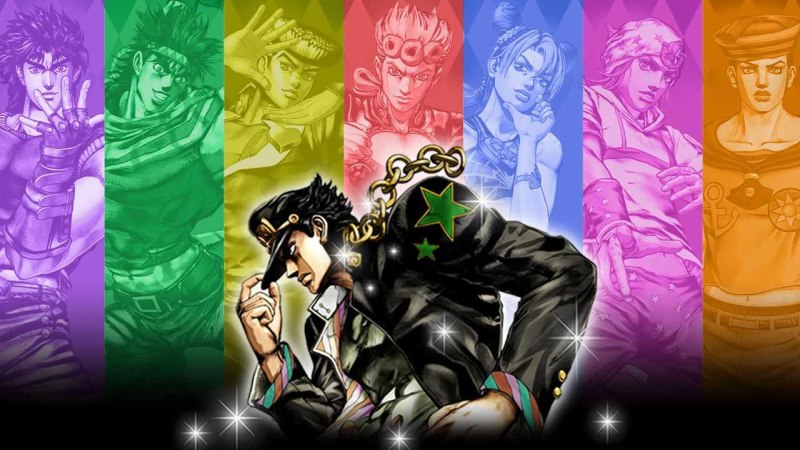 JoJo’s Bizarre Adventure: All Star Battle R Review (PS4) – The original release of All Star Battle landed back in 2014, and after eight years, it makes a return to modern consoles.

Much has changed since this game was originally released, so JoJo’s Bizarre Adventure: All Star Battle R has a lot of time to make up for.

Unfortunately, while the heart and soul of JoJo’s runs rampant in this game, its dated qualities run right alongside.

As someone who didn’t get a chance to play All-Star Battle when it first arrived on PS3, I jumped immediately on this re-release to see what the game had to offer and what it adds to the formula.

The smaller additions are tweaks to character move sets as well as additional characters from the JoJo’s franchise.

CyberConnect2 then added nine new characters to play with, bringing the total roster up to 50 different characters across the entire gamut of JoJo’s characters.

They didn’t just include cheap additions either, bringing in names like F.F. Diego Brando, Trish Una, Yukako Yamagishi, Pet Shop, and Robert E. O. Speedwagon himself! Who doesn’t love a little Speedwagon in at least a Roundabout way (I had to). 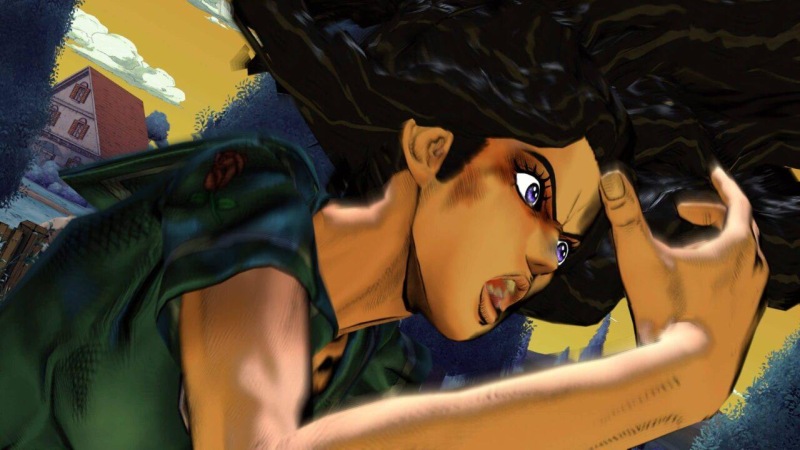 The most noticeable addition to the game comes with Assists. For each match, you choose an additional fighter that simply provides backup when you call him or her forward.

They execute an attack and then retreat from there. This adds tons of different ways to chain combos together.

With how obtuse many of the attacks feel, bringing a bit of balance to combat with Assists makes for a more customizable and malleable way to play the game. Each character has built-in limitations that easily fall victim to strengths from other characters.

Assists help to limit some of the existing combat shortcomings while also allowing flexibility for everyone to basically play as whomever they want.

Apart from the goofy scenarios that come out of the JoJo’s franchise, the aesthetic plays a paramount role in JoJo’s. Thankfully, much like the original release, the visuals play to the manga style beautifully, adapting it into full motion and color to great effect. 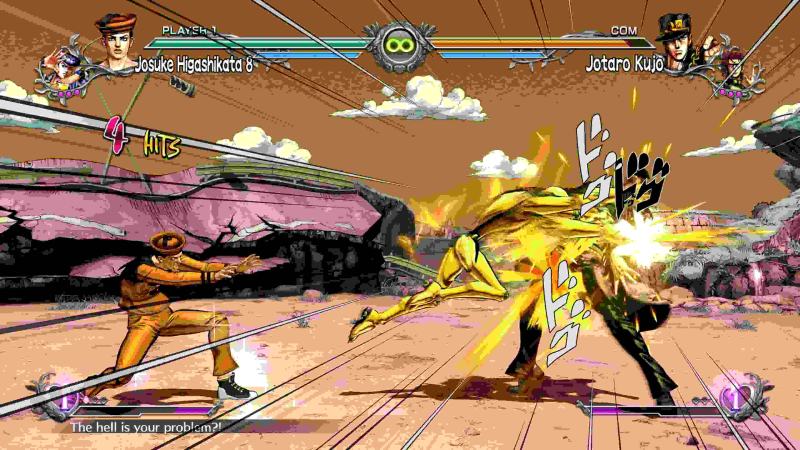 Adding in the Assists helps to bring even more style and flair to the battleground. Combine that with how truly unique each fighter’s style feels, and you end up with a decadent recipe for a good time.

The Japanese dub work excels, with enjoyable voice acting from every character. The major audio downside to this game is that the track list is just okay. No tracks truly stand out, and they don’t necessarily compliment the game much at all.

An argument can be made that this allows the voice work and sound effects to shine, but a good jam always makes beating up other characters more invigorating. On that note, the sound effects do the job nicely.

Hits feel good, and big attacks all come with their own fulfilling sounds. 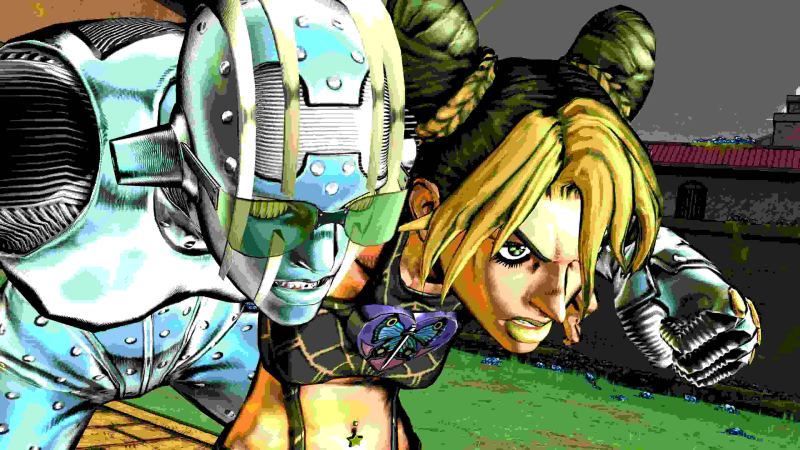 (Not) Keeping Up With The Joestars

Gone is the story mode that the original All Star Battle featured. From the way it sounds, that story mode followed a free-to-play game model and put fights behind stamina requirements that refreshed over time.

The bad part about that mode was that the game allowed you to buy refreshes of the stamina using real money.

Instead of that, All Star Battle Mode takes center stage. This mode is only meant for fans of the series and not much else simply because it acts as more of a greatest hits of fights from throughout the entire franchise.

Unlike other anime fighting titles out there, like the Naruto Shippuden games, All Star Battle Mode does nothing to recap or abbreviate the storyline.

Instead, you play as different characters in iconic fights that took place across the eight different seasons. 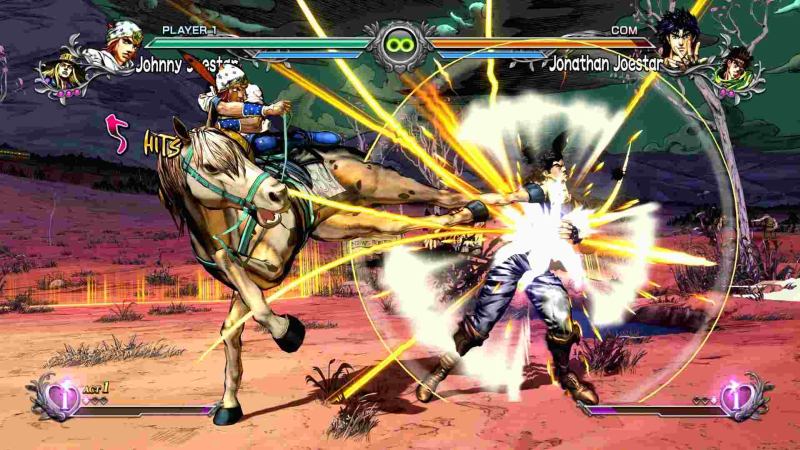 It’s still a nice amount of content. Either way, even in a game dedicated solely to the JoJo’s franchise, this mode has a very specific target audience in mind: loving fans.

Newcomer entry isn’t there when it comes to the story, but anyone can jump into a fighter and smack around random combatants.

The most unfortunate aspect of All Star Battle R is how it handles its servers. To the despair of many fighter fans out there, All Star Battle R keeps the delay-based netcode from the original game. This means that all network communication occurs with a delay built in that factors in the internet signals from both participants and balances toward the weaker signal.

Essentially, all connection types work together, but the network compensates for the weaker connection.

So, instead of helping both connections stay in tandem by means of balancing, delay-based netcode instead leans into the weaker connection and keeps the stronger connection from inputting commands immediately upon a button press.

This ultimately leads to bad communication between both parties, making the experience across the board either perfect with perfect connections or laggy as all hell with at least one bad connection.

From what I understand, between delay-based and rollback, delay-based is the simpler network to implement. 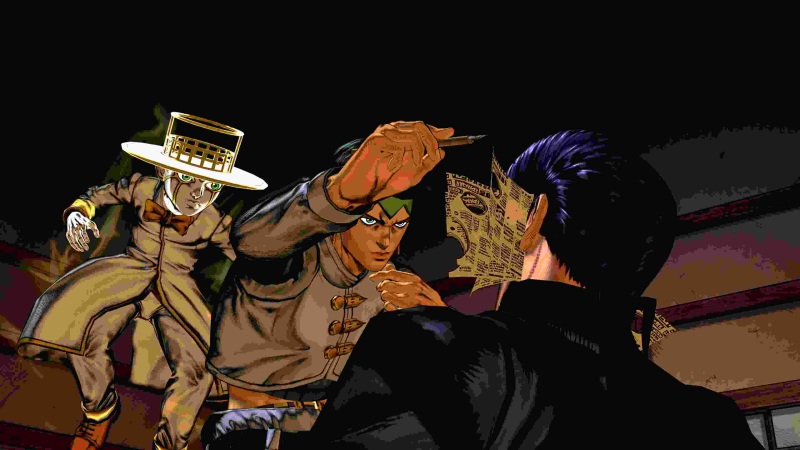 From a business standpoint, it could be using delay-based makes sense on a re-release of an old game. It just means that the user experience suffers for it.

Unfortunately for anyone who’s not a fan, JoJo’s Bizarre Adventure: All Star Battle R is exactly that: fandom candy in the form of a fun fighter package.

Online leaves a great deal to be desired, the delay-based netcode hinders any extensive online play, and the lack of cohesive narrative makes this a dive into the deep end for new players curious about the JoJo’s franchise.

Still, considering it’s a nine-year-old game at its core (that’s also expensive to buy on older format), All Star Battle R gives hardcore fans a fantastic outlet to Ora Ora it out against tons of beloved JoJo characters.

While far from perfect, JoJo’s Bizarre Adventure: All-Star Battle R brings an enhanced version of the 2014 release to modern consoles. Network choices, lack of any narrative flow, and almost zero jumping-off point for newcomers makes this a title almost strictly for the JoBros. Thankfully, that doesn’t keep it from being an intriguing fighter in its own right.