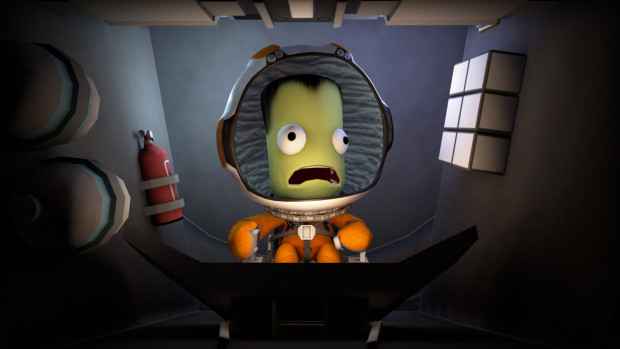 Who knew getting into space was so bloody hard? Typically when the journey to the great unknown is in video games, you skip the hard part of making a working space rocket to reach the stars. Perhaps there will be a bit of crafting, sure, but after that, it’s off into the great unknown.

Kerbal Space Program, despite its goofy-looking characters, is not a sunshine and rainbows space adventure. It’s about precision and failure. The game’s balance of silly and straight-laced is why it works as a surprisingly endearing sim game. At least, that’s how it works out on PC. A place where you’re not fighting technical malfunctions and mechanical pratfalls on two fronts.

You play as director of the titular Kerbal Space Program, helping to get the race known as the Kerbals… into space…with a program. You’re given a ready-made aeronautics campus complete with a variety of buildings to help you manage the program. To assemble space-faring vessels for use on your launchpad or airfield strip, there’s a Vehicle Assembly Building and Hangar.For fundraising and public relations, there’s an Administration Building. To upgrade your program's tech capabilities, there’s Research and Development. Here, by completing contracts from Mission Control, you gain additional funds. Rounding it out is the Astronaut Complex. This is where many brave Kerbals go to be enlisted for your many, many attempts to reach the inky dark of outer space. It’s safe to say not all of them will live to see you succeed.

Your garner progress in your space program via the use of a three currency system. As you complete missions, retrieve data, and set world records, you gain Reputation, Science, and Funds. Reputation is used to develop marketing strategies, and are depleted as Kerbals perish. Science is earned as you get further out into space and make data-based discoveries. You spend it on research and development to enhance your technology. Finally, there’s Funds, which are used for enlisting Kerbals, making facility upgrades, and building crafts.

So with that out of the way it’s time to get stuck in and reach for the stars, right? Sure, if you wish to subject yourself to abject misery and frustration. There’s a bit of that anyway, but Kerbal Space Program’s tutorial is essential fare before you do anything else. It teaches you a lot about the game’s base workings, amplifying enjoyment manifold in the process. Knowing the basics makes the actual experimentation fun. Putting together a vessel in Kerbal Space Program is simple on a surface level, but it quickly escalates into a complex amount and variety of tinkering. The planet Kerbin effectively has the physics and orbital mechanics of our own planet Earth, so you have to take that into account when launching.

The game can teach you basic ideas of lift, drag, force, and thrust, even pushing out to other, more complex, but relevant, subjects like aerodynamics. If you’re open to it, there’s plenty of interesting things to learn, and the application of it in Kerbal Space Program makes the learning fun. If nothing else, Kerbal is a good educational tool. At least when you aren’t fighting its failings.

Anyway, back to making the wannabe spacecraft. You’re organising parts, but you also need to plan out the operating stages those parts. Do that wrong and the end result is almost certainly the demise of a Kerbal, and probably an unsalvageable wreck of a spacecraft. You don’t want that, because in flight, you can record scientific observations, and control the variously equipment you may have built into the ship. Failing to come back properly leaves a lot of that information gained at risk.

It’s Kerbal Space Program strongest suit. How it invokes a childlike wonder and need to experiment, but with a very adult set of tools. You easily see in these moments why the game has gained such high acclaim on PC. Which makes the problems found in this PS4 version all the more disheartening. Kerbal Space Program on PS4 is a frankly risible port job. There’s little done to adapt the game for console use, and given some of the PC-centric titles that have come to PS4 and adapted controls successfully, it’s aggravating to see it so poorly executed here. Its biggest problem is how it makes menu traversal so cumbersome. This is a methodically slow game to begin with. So having the controls be in such a state that it takes even longer to do what you want is a huge test of patience that will undoubtedly put off many a curious cat.

The UI hasn’t been adapted either, and adds to the overall grumble of the menu navigation issue significantly. It’s ill-fitting, filled with barely readable text (which takes away a fair bit from the usefulness of those tutorials), and generally a bit messy to navigate.

Frame rate shouldn’t really be much of an issue in a game this slow-paced. Yet the fact it can affect your trajectory if it shows up at the wrong time is a real bummer. To fail an expedition through your own actions is a part of the learning experience. To fail because the screen faltered is beyond infuriating, and it happens far too often. Throw in glitches and bugs that can occasionally stall your progress, and you’re left with little but bitter disappointment. If you lack anything but the most saintly of patience, these issues will hae you aborting the mission early..

This may be a PlayStation site, but I implore anyone who likes the sound of Kerbal Space Program to go for the PC version. This PS4 version simply does not do the game the justice it deserves. Short of a large-scale overhaul, it seems doomed to stay that way.

Kerbal Space Program is a fascinating educational tool. There's a childlike joy to be had in experimenting with your space-faring efforts. You'll find it hard to appreciate that on PS4 though, as this version is a mess on multiple levels. A genuinely good game is spoiled by a terrible port.