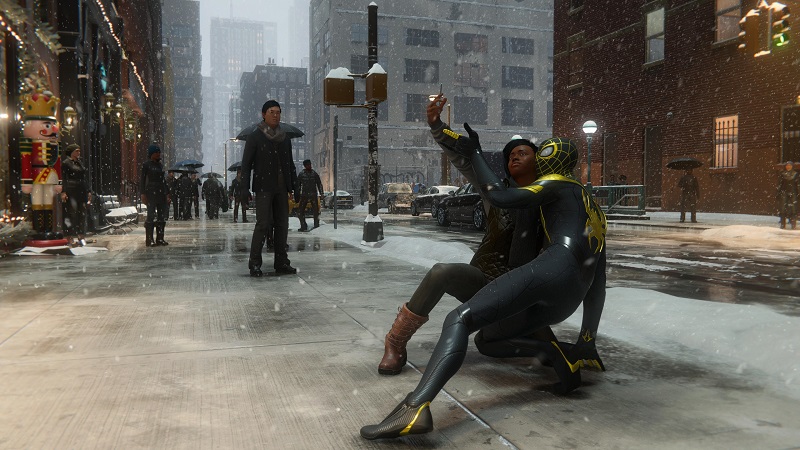 Marvel’s Spider-Man: Miles Morales PS5 Review. Little in the way of particularly strenuous mental gymnastics are needed to realize that launching a brand new PlayStation console with a continuation to 2018’s GOTY calibre Marvel’s Spider-Man is a Good Idea Indeed.

Much has been made of the fact that Miles Morales is not the full-fat Spider-Man sequel that fans had been pining for once the credits on the 2018 game completed their roll, but also that the game has been decidedly streamlined in both scope and duration. As it turns out however, both of those facts work decidedly in the favor of Insomniac’s latest foray into the superhero world of everybody’s favorite webslinger.

Continuing on from the end of Marvel’s Spider-Man (a handy ‘previously’ style digest exists to fill you in on those past events, should you not be readily familiar), Miles Morales puts players in control of the titular hero.

Still very much acclimating to the tumult of life as an older teenager in Harlem, let alone orientating himself to his newfound powers and capabilities, Miles is an earnest and likeable protagonist for whom family and sense of belonging are even more keenly felt than with Peter Parker in the 2018 title.

That difference in tone is carried through to the wider world and narrative of Spider-Man: Miles Morales too. Much more culturally aware than its predecessor, the writers at Marvel and Insomniac Games have fashioned a narrative that feels as much grounded in the present time, as it does a traditionally exciting and pulse-pounding superhero yarn.

On the topic of the latter, Miles Morales unfurls in a fashion that is immediately compelling. Reaching both back into the events which took place in 2018’s Spider-Man title and also taking sizable inspiration from the comic source material, Miles Morales has our hero facing off against a mysterious vigilante group called the ‘Underground’, who have been attempting to make life miserable for monolithic mega corporation Roxxon.

Without delving too deeply into spoiler territory, I can broadly say that Spider-Man: Miles Morales has a superb story that not only expands the world and lore of the character in interesting ways, but also sets the stage for a fully-fleshed out Spider-Man sequel rather nicely indeed.

As to the game itself, Spider-Man: Miles Morales is very much operating on the notion of ‘it ain’t broke, don’t fix it’ and so much of the core gameplay offering and overarching open-world structure will prove familiar to players of the 2018 title. Like before, players have much of Manhattan and other areas of New York at their disposal as they swing around the glossy skyscrapers and varied urban sprawl. Equally as before, the map is populated with all manner of activities to do – this time however, things are handled a little differently.

Enabled by a special app created by his best high school bud Ganke, Miles can track down the denizens of New York which require help in various seemingly mundane, but still entertaining ways. In one of these side missions, a man requires help freeing his car from the snow while in another a desperate cat owner enlists miles to track down his lost kitty. It’s the sort of wholesome, superhero stuff Spider-Man should be doing when he’s not rocking the big stakes battles.

Sure, it’s all fairly twee stuff but it dovetails neatly with the notion that Miles is really still just starting off as a superhero. Also, the variety of tasks which is included here is such that you never really tire of doing them either.

Away from such mini-narratives, there are no shortage of holographic challenges to take on which tap into player’s traversal and combat skills, while tech crates and momentums dotted around the city all provide additional incentive for the player to go exploring. If you’re fearing a map absolutely stuffed with icons and open-world busywork, you really shouldn’t. The reduced duration and scope of Miles Morales means that Insomniac Games have introduced just the right amount of additional activities for the player to do and as such, they hardly overstay their welcome as a result.

Tying neatly into the above, the skills, gadget and suit upgrade system that served as such a compelling progression bedrock for Marvel’s Spider-Man also makes a return here too. Thankfully though, rather than just being a copy and paste of all the upgrades and suits that Peter Parker enjoyed two years ago, Miles has his very own upgrade trees, gadgets and suit to rock when he’s busy doing his superhero stuff.

Further cementing the fact that Miles is a very different sort of Spider-Man to Peter Parker, the pride of Harlem also boasts a special Venom power which provides him with the sort of fierce stopping power that Peter Parker could only dream of.

Here, Miles can charge up an attack of pure energy before punching or charging into his opponents. Far from hapless, many of the goons that Miles will contend with boast special attributes that must be overcome. Massive dudes with shields for example must be stunned at range or have their shields pulled away from them, while hulking Underground enforcers must first be softened up with a precise Venom-powered strike in order for Miles to pile on the damage.

Speaking of which the combat in Miles Morales is as chefs kiss sublime as it ever was. Much like 2018’s Spider-Man, Miles Morales allows players to link up innovative combos, evasions, gadget attacks and stunning cinematic takedowns in a way that truly feels like an acrobatic evolution of the combat system that Batman Arkham Asylum got so right over a decade ago.

Likewise, Spider-Man’s breathtaking airborne traversal still remains without peer more than two years later; the act of swinging through the New York skyline just as the dramatic music score hits its zenith as you reach the peak of webbed leap proves to be as fist-pumpingly awesome now as it was back in 2018.

Unexpectedly, there are improvements here too. Figuring into his much more playful and free spirited attitude, Miles can pull off a variety of mid-air tricks such as rolling cannonballs, spinning falls and laid back tumbles that not only look super cool but also provide our hero with a neat experience boost too.

Visually speaking, the digital world of Marvel’s Spider-Man has never looked better on PlayStation. Enabled by the PlayStation 5’s hugely powerful CPU and GPU architecture, streets are now much more densely packed with many more pedestrians, with more varied building interiors and even traffic jams that can be hundreds of cars long. On a more intimate level, Spider-Man: Miles Morale is rife with rich, incidental detail too.

With a gorgeous ray tracing implementation that stunningly tracks reflections and lighting in a way that they we’ve just not seen before on console, and a frankly ridiculous level of texture detail that reveals such things as individually rendered shoelaces and fingerprints on objects, Spider-Man: Miles Morales is certainly an effective showcase of the PS5’s visual capabilities.

Another feather in the cap of Miles Morales sterling visual presentation is the 60 frames per second Performance mode. Though you lose some lighting effects, texture detail and of course those ray traced reflections, the trade off is absolutely worth it as the game feels transformed by the huge uptick in animation smoothness and control response. Honestly, when you’re swinging over the New York Highline at a solid 60 frames per second, you’ll never look back.

Then there are the benefits of the PS5’s SSD which are brought to bear in stunning ways, too. Boasting totally seamless transitions between interior and exterior environments and extremely fast overall loading times, thanks to the latter fast travel is practically instantaneous now (a shame as I actually quite enjoyed the different subway sequences from the 2018 title).

Finally, another improvement of sorts that Miles Morales brings over its more fully fleshed out predecessor is that thankfully those risible, MJ-centric insta-fail stealth missions which were a blight on Spider-Man 2018’s otherwise Game of the Year calibre credentials are now long gone. Good riddance.

Though Spider-Man: Miles Morales ultimately sticks perhaps a little too closely to the core formula of the original (again, hardly a bad thing), its shorted duration of about 15 or so hours to do just about everything makes it the sort of eminently digestible affair that many of us could do with right now.

As a PlayStation 5 launch title, Spider-Man: Miles Morales is a technical showcase which doesn’t just show off the visual capabilities of Sony’s new console, but which also provides something of a tantalizing blueprint for where Insomniac Games could take the adventures of Marvel’s marquee attraction next. Marvel’s Spider-Man: Miles Morales does whatever a spider can and much, much more.

A stunning and must have PlayStation 5 launch title, Marvel's Spider-Man: Miles Morales is a beautifully digestible superhero yarn that not only maintains the formula of its 2018 predecessor, but which also lays down an enticing blueprint for a full blown sequel to follow. This is essential stuff.