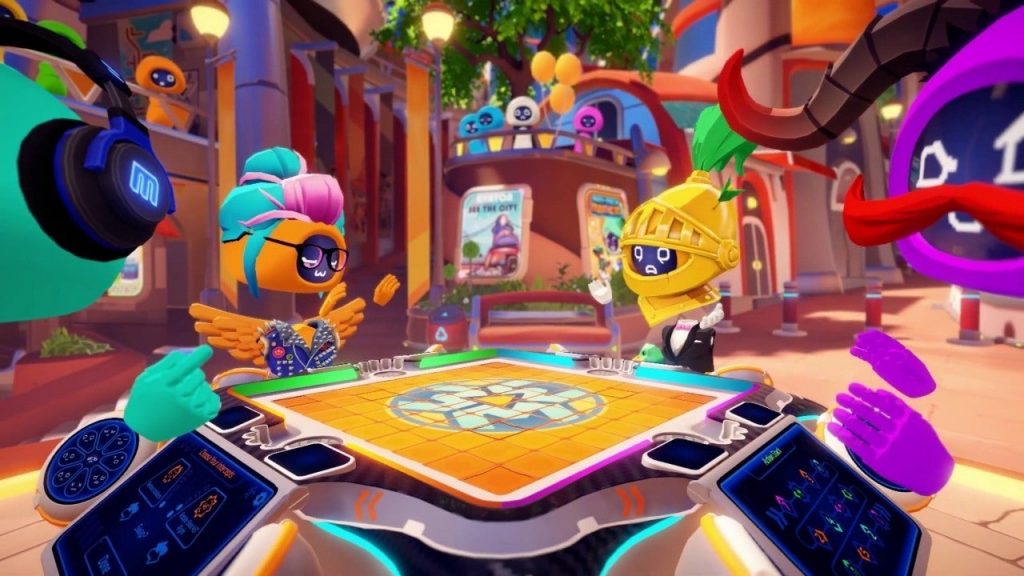 Mini-Mech Mayhem is a beautifully designed game, with grand AI ideas, and bright cheery graphics that are detailed enough to be impressive, but simple enough to work well on PSVR. The gameplay however, falls into a strange no-mans-land, relying on guesswork and premonition instead of strategy to succeed.

While this might be a fun game with four players – indeed, MMM’s smart design encourages interaction – the single player offerings simply feel too random to keep the player engaged.

Entering a game in Mini-Mech Mayhem, four players find themselves seated in a bright, colorful city square, surrounded by cheerful robot spectators. They are perched around a playing board that has been divided into a 9 by 9 grid. Each player controls their own highly customizable mech. (The game starts with a fair amount of customization, and a simple leveling system quickly unlocks a ton of options to allow you to further make your mech your own.)

Players place their little buddy on the board and start the first “round”. Each round sees every player enter in three consecutive commands for their mech to follow. The command system is simple. Your mech can move and shoot. The three commands have to be distinct, not allowing your mech to move or shoot twice in the same direction. So, you enter in commands like this “Move four squares forward. Shoot to the right. Move two squares to the left.”

While you are entering your commands, the other three players are also entering in commands of their own. When the round starts, the mechs begin moving around the board in their pre-programmed patterns. Which mech moves first is determined by the commands entered by the other players; various moves consume more or less points, so the mechs move in the order dictated by the point value of the commands you have entered.

Players also have access to a rotating selection of one-shot super-powers, which can be played during any mech’s move. These have dramatic effects on the gameplay, doing things like rotating all of the mechs on the gameboard, or sending shots spiralling off in the wrong direction.

The object of the game is to be the first to get three points. Points are earned by killing other mechs – either by shooting them three times or forcing them onto trap doors that litter the board – or by capturing “Victory Square”, a randomized square that has a coin hovering above it. Victory Square is captured by simply ending the round standing on it.

Does this sound confusing so far? You should see the tutorial. More on that in a bit.

Where Mini-Mech Mayhem Goes Off The Rails

When all of the mechs crank to life in turn, you quickly see why Mini-Mech Mayhem would be fun and hilarious in multiplayer, and next to impossible to enjoy in single-player. Since you have no idea what commands the other players are entering, you also have no idea what order the mechs will move in. This leads to any strategy that you might have planned instantly going out the window, as the other players have likely moved away from their starting positions and stymied any attempts to shoot them.

Your little mech walks forward, shoots at nothing, someone fires off a super power, then your mech wastes the rest of its turn walking into a wall. Other mechs wander in some aimless direction, shoot at nothing, and fall down a hole. Every round feels random and hopeless, with your strategic choices feeling utterly pointless. It is impossible to make a strategy when everything is so wildly unpredictable.

Of course, all of this stymying action would be fun in multiplayer, with smack talk cranked to level ten. But in single player, it is a chore to simply limp to the end of the match. I often got about halfway through and started wishing for the game to end, regardless of whether I was winning or not.

The Tutorial Could Be Its Own Game

Mini-Mech Mayhem, for all of its friendly veneer, does come off as a very complicated game. In reality, the ruleset isn’t that bad once you get the gist of what’s going on, but the fact that the tutorial consists of forty training missions doesn’t help sell the player on the game’s simplicity.

That’s right. You read that correctly. Forty tutorial missions for an online VR board game.

Now, to be fair, only ten of these missions are really required to learn MMM’s rules. But each of these tutorial subjects has three optional sub-missions that should be played to really understand the intricacies and implications of the rules you are being taught.

And to be honest, these tutorial sub-missions were some of my favorite parts of the game. Players are placed on the board with some AI opponents, with the opponents’ pending moves revealed. The player must figure out how to accomplish various goals in a set number of moves (stuff like “kill both opponents and capture Victory Square in two moves”).

This all comes off feeling like a fairly rewarding puzzle game. I enjoyed stretching my brain power to figure out where each opponent would end up after they made their moves, and plan my moves accordingly. Of course, all of this training is rather unrealistic, since in the actual game players are entirely in the dark about what their opponents are about to do. But as a diversion for an hour or two, MMM’s tutorial isn’t too bad.

Though that ignores the obvious fact that swirls to mind immediately; when the most rewarding part of the time you spend with a game is its tutorial, that game is in a bit of trouble.

If you aren’t planning on playing multiplayer, I would avoid Mini-Mech Mayhem entirely. On easier difficulties, the opponents are so stupid that you can’t possibly anticipate the dumb stuff they will do, and on harder difficulties, the game feels like a death march, with opponents crushing their way to victory square regardless of how you planned to stand against them. The single player component of Mini-Mech Mayhem simply isn’t very fun.

I would like to say that multiplayer is better, but I can’t really. Due to the fact that I was playing MMM pre-release, servers were empty and I was unable to find a match (no fault of the games, of course, but worth noting). However, Mini-Mech Mayhem has all the components it needs to be a fun online game.

Players can not only customize their mechs, but they can also customize the way they will appear in-game, with a variety of colors, faces, and funny hats. A simple UI allows you to change the expression on your in-game avatar robot. And any game that lets you interact with other players in a VR space is inherently somewhat fun.

But only time will tell if playing Mini-Mech Mayhem online is fun. While the concept, UI, music, character design and all of the other bells and whistles are in place to allow players to jump in and start goofing off, the gameplay might not be enough to bring them back for more than a couple of sessions.

Mini-Mech Mayhem is worth consideration if you and your band of VR-playing buddies are looking for a new title to jump into together. But don’t be surprised if you bounce off and go back to Rec Room. The strategy-based gameplay feels more like it is based on luck, and all of the bells and whistles in the world won’t make that any less frustrating.

Mini-Mech Mayhem has all the trappings of a fun game. The colorful visuals, cheery gameplay, and online representation of the player are all top-notch. But the core gameplay is somewhat questionable, due to the fact that it forces the player to strategize on unstable ground. There is a fine line between “anticipating” other players moves and “guessing”, and in Mini-Mech Mayhem, that line is fuzzier than PSVR’s graphics.