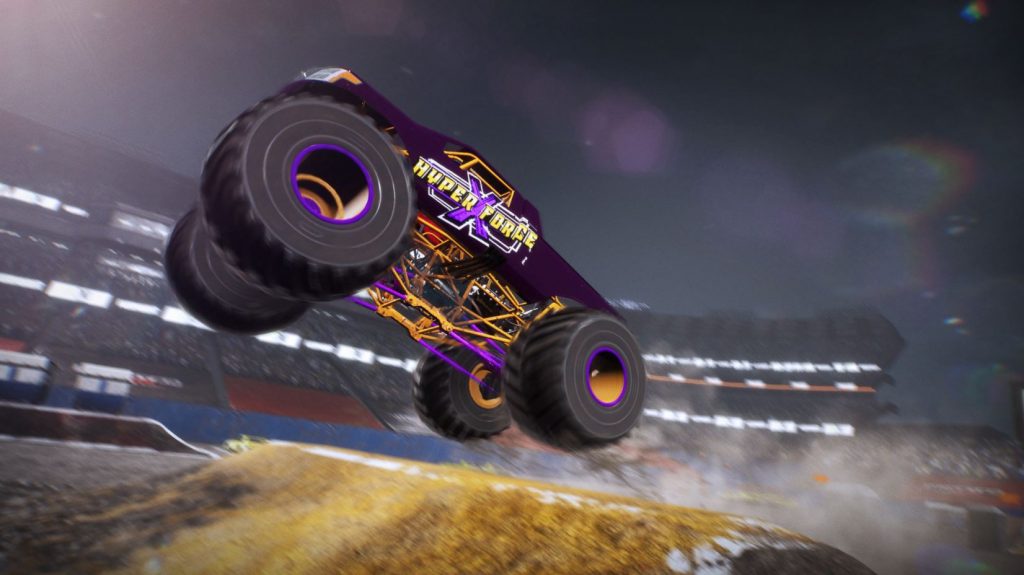 Monster Truck Championship PS4 Review – At the age of fourteen, I held the dubious honour of being the fattest child in my school thanks to a regular evening diet of crisps and cola whilst lounging in front of my Commodore 64. I revelled in the sweet and salty joys of junk food as my hands worked up a sweat playing Summer Games with no sense of the irony of being a teenage boy with breasts getting his only exercise on screen, whilst shunning actual sports every week with a sick note.

In the same way, a Monster Truck can also be considered to be the fattest child in the school of motor sport – a physical embodiment of American excess with four colossal wheels on a standard pick-up and an oversized engine thirstier than a Sumo wrestler in a sauna. Polish developer Teyon have now delivered only the third Monster Trucks game on the PS4 to date, preceded by the two perfectly serviceable Monster Jam games, but is it a listless and lonely flabby boy with breasts or a dynamic and popular prefect?

There’s something gleefully moronic about Monster Trucks, with the almost comical official championship comprising of low speed dirt track racing, half minute two car ‘drag’ races on identical mirrored tracks and Destruction / Freestyle which encourages as many jumps, tricks and smashed caravans as you can muster in the allotted time.

Each of these disciplines are mildly enjoyable in their own right, but linked together to create individual championships, they manage to create an addictive and challenging cluster of events in which you drive to your strengths. Ensuring that you take victory in your preferred event type gives you leeway to underscore in races or score challenges which may not be as enjoyable or inspiring.

The single player career takes centre stage and offers up three tiers of difficulty, each with a string of championships across the United States leading to the final which requires a hefty entrance fee. On the way to the final, you can spend your event winnings on powering up one of the four attributes of your vehicle’s performance, along with employing team members.

Engineers, vehicle specialists, managers, agents et al can all be employed in limited numbers as a rookie, and these have positive effects on your winnings, your truck’s performance, and the repair and entrance fees for championships. It’s an extremely shallow management system, but it adds another option for boosting your sluggish lump to help win races.

A sprinkling of sponsors are available throughout the career, with specific requirements from each race in order to pay dividends. Again, like the team members element, it feels somewhat pointless and forgettable but helps to accumulate cash to climb the Monster Truck ladder.

Variety Is The Spice Of Truck Racing

The races start as three lap affairs on short dirt tracks, progressing to longer and more complex circuits which offer choices of route and longer race times as you progress to higher tiers. Aside from the feeling that the tracks aren’t wide enough for the eight trucks crowding into the corners, the races do feel genuinely thrilling as you attempt to claw your way to the front of the flabby pack, and somehow Teyon have managed to combine the weight, inertia and ungainliness with a good sense of speed.

Monster Trucks have the strange ability to turn both the front and back wheels, with the rear wheels mapped to the right stick and initially this takes a great deal of getting used to. Once you’ve mastered it though, you can take tight turns far quicker and use the back wheels to perform some impressive tricks on the ‘gymkhana’ events.

Drag Races are surprisingly addictive as you try and launch off the start line with a perfect combination of ideal RPM and as little delay to releasing your truck as possible. The main challenge is to navigate the often narrow short sections of track while your single opponent is visibly racing towards the shared finish line on the other side of the circuit. Nailing the quarters, the semis and the final flawlessly is incredibly satisfying, particularly knowing that a restart takes you back to the quarter finals again.

The trick-based Destruction and Freestyle arena events are large ovals peppered with various jumps, cars to crush, caravans to obliterate and walls to enable somersaults. Stringing together these tricks is the key to a high score, and although initially your truck seems incapable of anything more than lumbering around the arena interspersing a demolished caravan with a flip onto its roof like an upended beetle, eventually you’ll be racking up enormous scores by performing ‘bicycles’, flips and huge jumps.

Rather than simply regurgitating the same circuits and arenas throughout the career, Teyon have ensured that with each individual competition and championship, new tracks are introduced and there is genuine progression through the single player campaign as you level up your truck’s performance.

Elsewhere, the online competitions all provide enough options for when the servers are populated and all the times and scores you post in the single player career are uploaded to the scoreboards ensuring that you are always striving to improve when playing alone.

Replays are conspicuously lacking which is a shame, particularly during the freestyle / destruction events when they would be most entertaining, although the camera frequently cuts away to a comically entertaining slow motion view during spectacular jumps while your vehicle soars through the air.

At best, Monster Trucks Championship is visually competent, with a fairly solid 30fps giving a good sense of velocity considering the nature of the vehicles. The dust plumes during the eight truck races and the accumulated dirt on your truck help to conjure a realistic feeling of the sport, although the peripheral trackside details tend to be simplistic on all the courses and arenas. It’s never going to impress but the game does enough not to impede on the actual racing and considering the budget, is perfectly acceptable in representing the sport.

Thankfully the voiceovers have been kept to a minimum, considering how other North American niche motorsports ladle on the bombast, and the ‘rawk’ music is easily ignored between races. Vehicle sounds are all enough to convince that you’re driving something that’s heavier and more ungainly than a Greggs customer on payday, but again, there’s not a huge amount of finesse here which is kind of apt considering the nature of the racing.

Gruel Or A Tasty Pie?

Having experienced the often gruelling raft of tedious licenced motorsports games such as Nascar Heat 4, FIA European Truck Racing Championship, Monster Energy Supercross 2 and the likes of non-games like Overpass, I was fully prepared to trudge through my time with Monster Trucks Championship with great trepidation.

I was however pleasantly surprised by what Teyon and Nacon have delivered; a highly playable and superficially enjoyable blast around well designed circuits in satisfyingly twitchy and weighty vehicles resembling shih tzus wearing oversized Dr Martens. Taken as a guilty pleasure which one can dip in and out of when you’re in the mood for some brainless fun, Monster Trucks Championship manages to deliver. There’s precious little in the way of original or new ideas here, and dipping back into the PSP Monster Jam from 2010 reveals that the basic driving mechanics and race options are much the same.

That said, if you’re looking for a cutting edge off-road simulation with viable management mechanics bolted onto the rear end, then you’ll need to look to Nacon’s superb rally sim WRC 9. At full price, it’s hard to heartily recommend, but once the price drops, then Teyon’s alternative off-road arcade game is worth playing for anyone who likes a bit of variety in their digital motorsport.

Monster Trucks Championship is out now on PS4.

A surprisingly enjoyable off-road licence which never impresses visually, but manages to combine good handling and a wealth of tracks and arenas to create the right chemistry for a shallow but very playable dip into an ironically droll and niche motorsport.