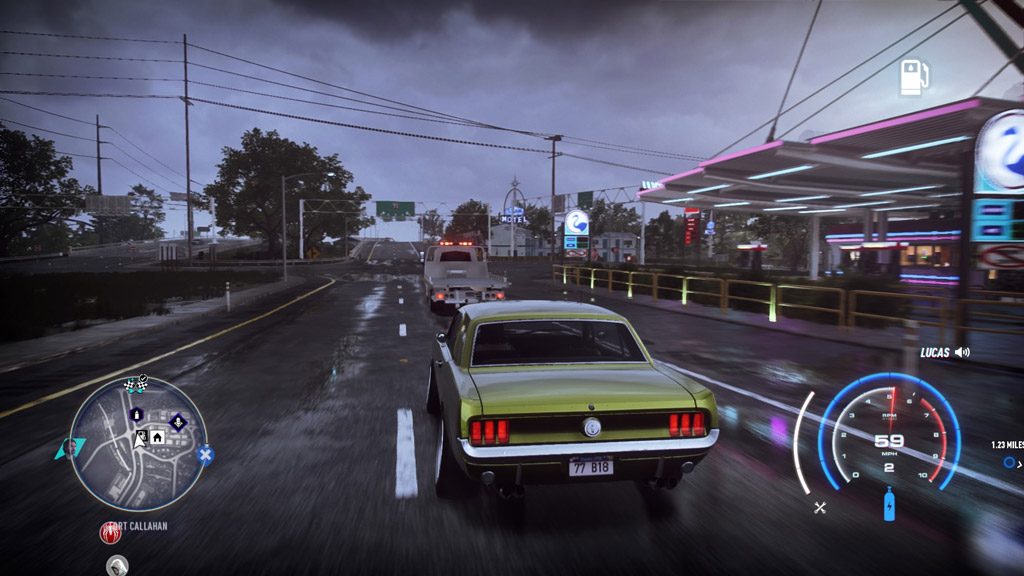 Playing the latest Need for Speed game is like going on a date with a vacuous narcissist, one who becomes irritating and boring in equal measures after three minutes of conversation. But can you see through the emo-socialite jive-speak and find true love? Let’s find out in our Need for Speed Heat PS4 review.

Perhaps the motivation for EA to continue to churn out this moribund franchise after 25 years is purely artistic, and nothing to do with the 150 million sales of the previous NFS games. Despite the financial carrot dangled by the publisher, it’s hard not to feel a tinge of sadness for the talented artists, designers and programmers tasked with farting the next installment out of EA’s muscular arse.

As you can tell from this upbeat and cheery preamble, this generic nonsense doesn’t seem like a particularly attractive proposition but perhaps there are hidden gems within the corporate buffalo pat.

Palm City (Miami) is run by rogue cops…blah blah blah…community of good honest street racers…blah blah blah… Firstly, ignore the story welded onto the open-world street racing template. The script and characterizations are perfectly serviceable but entirely generic and add zero to the game. Fortunately the cut-scenes can be skipped.

The structure of the game involves grinding street races either during the day to earn ‘Bank’, or during the night to earn ‘Rep’. Escaping cops at night and completing mini challenges also boosts your Rep allowing you to enter more prestigious illegal races once you have the car and Rep to qualify.

The 100+ cars are extremely well rendered down to the last wingnut and there’s some nice variety here with 60s and 70s Plymouths, Volvos, Aston Martins and Fords rubbing hubcaps with modern supercars from Lamborghini, Ferrari, Porsche and McClaren. There are a good few duplications in the car line up though, differentiated only by a soft-top roof or a few years between models, so the vehicle count can be taken with a slight pinch of salt.

As to be expected for a street racing game, all the vehicles can be tuned to your heart’s content, allowing you to dominate whichever mode of race is up next once you have the necessary ‘bank’ to afford the upgrades. The paintwork options and decals available also allow for some huge creativity in how your wheels appear on the streets, and the scope for creative types is almost endless. Sharing your designs online and checking out other drivers’ car art is one of the strongest suits within the game and no doubt will enhance the appeal.

Talking of gameplay, the driving itself is a fairly antiquated experience, mimicking the Ridge Racer double tap on the accelerator to drift around tight bends at speed. Once you’ve adjusted your driving style and begin to master the cornering, it still feels unsatisfactory. Considering the amount of tweaking you can do to your vehicle, the bland arcade style of racing ends up neutering any potential for nuance on how your car handles. You may as well save up for a faster car rather than waste money on upping the stats.

While you’re rear end is flailing around at 30 fps through Palm City, you can happily plough through the scenery with minimal punishment – trees fly out of the ground, fences are torn asunder and (most) walls are begging to be obliterated with nary a dent or smashed windscreen. Your damage meter does rise when you encounter one of the impassable objects and a few scratches appear on your paintwork to reflect this. Driving through one of the garages instantly fixes your car though, so it never becomes a major issue.

The aforementioned rogue cops only appear at night and they’ll be hankering to bust your hiney at the first opportunity. They appear as red blips on the map and they’ll give chase as soon as you are within spitting distance, with more fuzz joining the party if you don’t manage to shake the first batch. The usual off-road shenanigans and weaving through oncoming traffic will usually do the trick, but once three cops are on your tail, it becomes a long drawn out affair which often ends in your ass being busted, unless you luck out and fly off a nearby cliff. As one might expect, you subsequently lose a chunk of cash and wake up back at your garage.

As you progress through the missions and races, you realize that Palm City is a very sparsely populated place. The pedestrians are nowhere to be seen and the few cars and trucks pottering around the streets all appear to be driven by pensioners high on Valium. No doubt programming the extra detritus would have eaten into the frame rate, and would have made the wild street racing somewhat more tricky, but a supposed open-world city which is half-deserted may as well be a race track. Which defeats the point of the whole game.

Graphically, there is some slick cross-cutting between scenes and the neon disco loading screens of your car are one of the artistic high points of the whole package which isn’t saying a great deal unfortunately. The city looks impressive, particularly at night with some nice weather effects and the cars are all superbly realized. It’s a shame that at a locked 30 fps, the whole visual experience becomes a challenge to the eyeballs, particularly when you start hitting speeds over 150mph. The sense of speed is palpable, but smooth it ain’t.

Thumbs up for the audio however; the engine sounds are tremendous, and the extensive tweaking even extends to the timbre and throatiness of how your tuned beast sounds.

Online, you’ll come across other humans in their cars and you can race them from the starting point of any of the street circuits which populate the single player game on the map. This makes the whole experience more akin to the concept of street racers meeting in the dead of night with their modded four wheeled beast (albeit in their underpants on a sofa) and no doubt enthusiasts will create a thriving community.

Need for Speed: Heat manages to underwhelm on so many levels, but is just about competent enough to maintain the quality expected from this series – something of a depressing state of affairs. It’s not awful and has many hours of gameplay on offer for anyone who decides to partake, but there are so many other better options out there.

I’m convinced that Ghost Games could muster something more interesting away from the confines of EA’s dead franchise and the expectations that come with the $50 million+ budget. As it is, we have a utterly uninspired mashup of The Crew, Burnout Paradise, elements of GTA V and the last few NFS games. If you decide to stump up the cash for this expensive compilation of ideas, it will certainly kill some time and get you a few trophies. Unfortunately at full price, you’ll also be severely out of pocket and it will merely help to perpetuate a series which saw its heyday nearly 20 years ago, but has been failing its MOT ever since.

Need for Speed: Heat is out now on PS4, PC and Xbox One.

An unnecessary release which cobbles together pieces from other, better racing games into a competent but dull experience. Save your cash and grab a copy of Burnout Paradise Remastered instead.