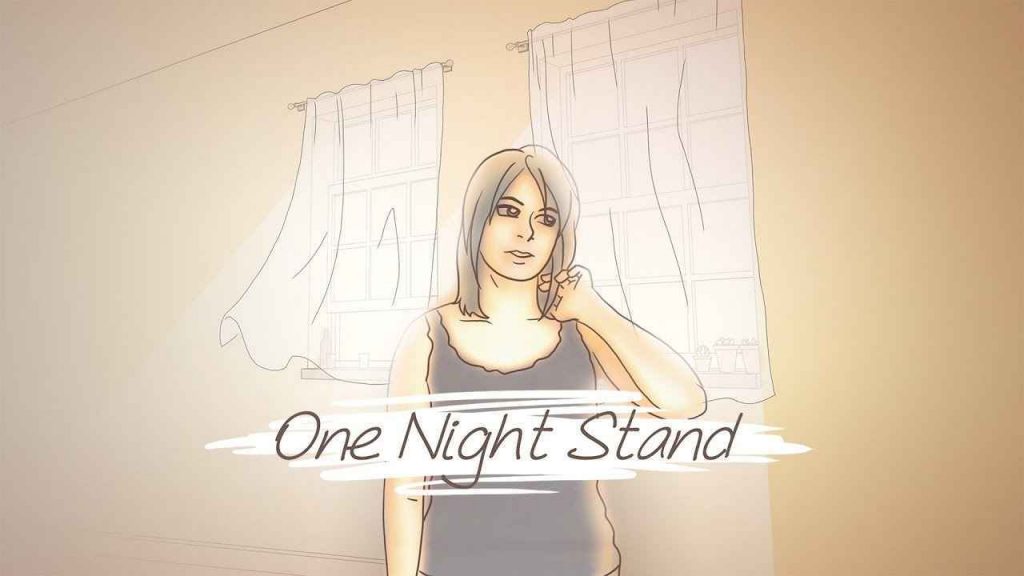 Getting to know a person is one of those things that, no matter what level of investment goes into it, always feels like lightning in a bottle. Knowing a person intimately and knowing someone at face value can be separated by one or two choices. At its very heart, One Night Stand wants to convey this point.

Gameplay-wise, One Night Stand simply plays as a point-and-click game. Over the span of a ten-minute scenario, you have a chance to reach twelve different outcomes, all based on the decisions you make along the way.

The aesthetic side of the game subtly conveys exactly how the situation feels: shaky. All pen lines around the characters are loosely drawn, not always connecting to their adjacent marks. They also have a fluid motion to them that wobbles back and forth from where they should be. While this creates a sense of unease, all the colors retain the shape of the object or person they convey.

This contrast has an oddly soothing effect to it. The rest of the room remains stationary, albeit with similar, static artistry. In that room, you find different items to help you get a sense of how the forgotten night played out as well as what this woman is like. In doing so, you find ways to either get to know this woman, try to get out without confrontation, or anything in between.

Ultimately, many of these outcomes require very specific actions in order to reach them. Philosophically, I find this immensely wonderful. I have played through this scenario over and over, and I have so much trouble trying to get to the outcome I longed for. This woman seems so intriguing.

Like an iceberg, this woman only allows me to see a fraction of who she is as a person. At the same time, that fraction that she presents has so much charm in it. This may just match up with my personality type, but that’s what synchronicity is all about: finding significance in a random occurrence. I struggle, playing through the game over and over again, trying to see what combinations would allow me to earn her trust, but I keep making the wrong decisions.

At the same time, having to repeat the process over and over for different outcomes, as a game, can ruin the original outcome. I encountered this very same sensation when trying to play through Heavy Rain a second time: It just doesn’t have that same weight, like somehow going back and changing things makes what you went through seem pointless. While One Night Stand lets you see how you could have done things differently, multiple playthroughs create diminishing returns to what the game hopes to do.

While I can’t say this scenario makes for an entirely engrossing video game, One Night Stand exceeds in highlighting just how important one moment in time can be. Equally so, we cannot always be with someone, despite how we feel about that person. A relationship is not one-sided. The way that One Night Stand creates that sense of almost-hopeless longing makes this experience so wonderfully human.

Despite all this, One Night Stand has a few peculiarities to its controls. I would use the arrow keys on the side of the screen to pan the room, but once in a while a prompt appears like I tried to leave the room. That prompt is at the bottom of the screen, far away from the panning arrows. Some interactive items, like books or clothing, also sit underneath navigational buttons, which causes me to move around instead of interact with that object.

One Night Stand creates humanity out of an awkward moment in the lives of two people who randomly met each other. While the gameplay lacks the kind of refinement to really make the content beam, One Night Stand is quick to finish but full of heart all the same.

One Night Stand offers up a slice of humanity, with an art style perfect for what it tries to do. Repetition sometimes gets in the way, and a couple odd control choices may mess up your playthrough. At the same time, the heart and soul of what One Night Stand is always on its sleeve, allowing you to either embrace it or crush it. This will be a sleeper hit for a long time, despite a crowded market.